You might remember EDGE developer Mobigame from its legal troubles with Tim Langdell over the title of their iPhone game. Mercifully, after a year of court cases, the independent developer was able to put EDGE back onto the iPhone market early last year.

Now the game is out on Steam for both PC and Mac, but how well does it translate from the iPhone to your desktop?

EDGE is a combination of puzzles, platforming and time attack styles of gameplay. You control a flashing cube from an isometric viewpoint made up of other cubes which will form platforms and ledges. The object is to get from the start to the end of the level as fast a possible; you’re given a ranking at the end depending on your finish time and a running total of how often you fell off an edge.

Collecting smaller cubes or “prisms” will speed your cube up and are invaluable in improving your rank. You can also gain a few seconds of time by moving your cube to a ledge and slowly moving up. You’ll gain time by balancing your cube on a ledge, so this tactic can gain you precious seconds as you make your way to the finish. Sounds simple enough.

But therein lies the challenge. Getting one of the two top ranks possible — either an S or S+ rank — requires picking up all the prisms in a level, which can be fairly well hidden. Thankfully, there’s a mini map in the top left-hand corner that displays where the prisms are but also shows hidden paths obscured by the game’s isometric viewpoint. The map is great at showing you routes that are hidden by the game’s angles, but doesn’t do a good job at showing paths that are obscured by a roof or overhanging platform. 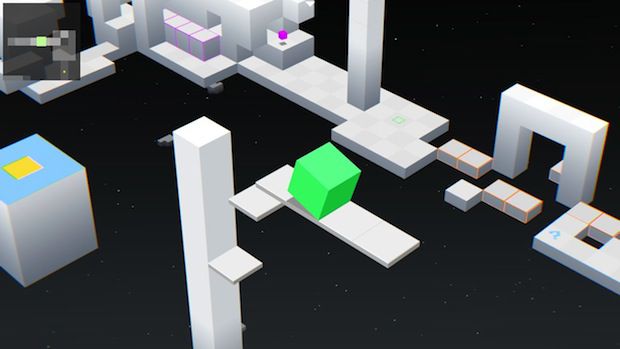 The big strength of EDGE is that there’s new mechanics and gameplay features introduced in almost every level. The game initially looks like it’s simply about getting your block from the start to the end of the level but once it starts introducing a variety of moving platforms and ways to activate them.

In one mission, a group of blocks formed into a robot and thrust me forward to the end of the level. In the next, I was chased along a narrow path by a malevolent column. EDGE continues mixing up its level design but there’s a very natural learning curve. There are some handy “?” markers that will give you a brief demo of what you’re expected to do at a specific section before letting you have a go yourself. Generous checkpoints mean that failure to proceed is going to affect your ranking but won’t adversely affect your ability to ultimately finish the level.

My only frustrations with the game came from a few cases where I respawned at the same point I kept dying at. I had to restart the level (this problem appears to have been patched). The other problem I had was that it wasn’t made clear that the mini-cube power-up allows you to climb up walls. It was only on maybe my third or fourth attempt that I realized I could climb up a sheer-face and that’s because it was my only option.

Other niggles come from the controls; I used a keyboard but often I felt the weight of the cube’s rotation was causing me to miss platforms and ledges even though I wasn’t wanting to move that much. Also, it would be good if there was a fly-by or large map showing you the whole level to give you an idea of how long it is. There were a few times I got lost in the later levels because I had no idea where the exit was. These are small issues though, as I said earlier EDGE‘s checkpoints allay a lot of frustration. 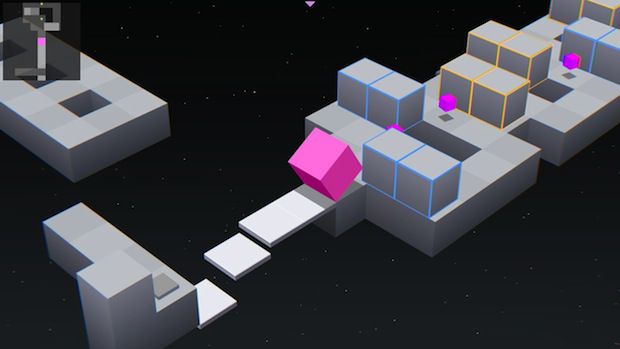 Even when I failed part of the level and died repeatedly, I never rage quit and with me that’s quite an achievement. That’s not to say there’s not challenge here; I finished some of the later levels with times approaching 15 minutes and a D ranking. Getting those upper rankings is quite a challenge.

The tag “platformer” doesn’t quite fit EDGE, but neither is it a full-on puzzle game. You’re not often required to make pixel-perfect jumps and leaps, but you’ll need to think and react quickly to make it through levels efficiently. Likewise, there’s very little traditional puzzle elements in EDGE, aside from a few button-sequence puzzles, but you will need some smarts and lateral thinking to figure out how to get past some parts of the game.

EDGE is a great pick-up-and-play title; the controls are simple and levels can be completed in a couple of minutes, but the desire to improve my ranking kept me coming back for more.