If you build it, a Dynasty Warriors spin-off will come. This has been true of any game system released in the past few years, and Tecmo Koei has no intention of breaking tradition with the PlayStation Vita. Dynasty Warriors NEXT can’t wait to get out of the door, releasing as a launch title for Sony’s handheld system. 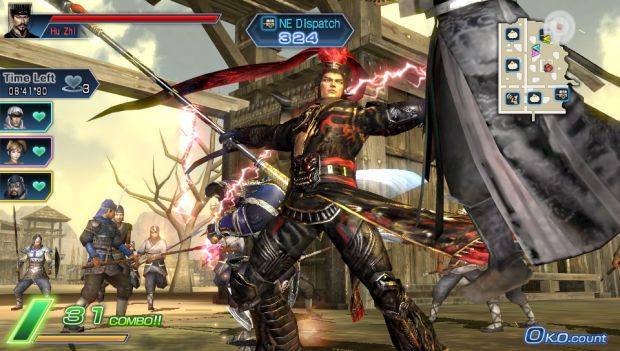 As with any Dynasty Warriors title, the premise revolves around the “Three Kingdoms” era of medieval China, as a trio of warlords fight to rule the land. A huge amount of playable generals duke it out on battlefields populated by hundreds of opponents, asserting their dominance with simple, instantly gratifying, button mashing combat.

NEXT takes a lot of cues from the series’ Empires spin-offs. Rather than individual story modes for each character or faction, the game is split into various scenarios where stages are selected on a map of China. Players can invade territories in order to expand their influence on the realm, earning gold for each own region. Gold can be spent on stratagems, special boosts granted by the warriors currently employed by a player faction. These stratagems might increase the attack and defense of a player, boost the aggression of the allied army, or render certain bases easier to capture in battle.

Bases return to the series and are more important than ever. During combat, the map is split between various allied and enemy bases which grant the respective armies extra advantages. A supply base will increase the strength of all allied bases, while an armory can periodically double the attack of all friendly soldiers. There are lairs which spawn tigers, wolves and bears, as well as magical bases that link themselves to other bases and render them invincible. The more bases owned by a player, the easier it is to capture the main camp and secure victory.

Capturing a base is simple. One just needs to slaughter everything inside it until a troop counter drains to zero. Maintain enough of a rampage before the enemy can replenish, and it’s yours. New to the series is a “break” meter that slowly fills during battle and, when full, can instantly take over a base with a tap of the touchscreen. If only the touchscreen input had stopped there, this could have been a fine new addition to the series.

Unfortunately, NEXT goes absolutely insane with the touch interface, to the point of turning it into a forced gimmick. At first, it’s not so bad — players can use the touchscreen to make their special attacks more powerful, by swiping across it to direct slashes, tracing circles to create whirlwinds, or hammering the back touchpad to cause tremors in the ground. The way the Vita has been used to make musou attacks even more damaging is quite pleasant, and actually enhances the game a little. That’s all fine, but Omega Force went too far.

The game is frequently interrupted with minigames. In between stages, players may be forced to partake in awful horse racing sections with unresponsive gyroscope controls, or swipe at incoming enemies in a repetitive game of whack-a-mole. The worst minigame is calligraphy, where a Chinese symbol is hidden on a blank sheet and players need to trace on the touchpad at a pace one can only describe as excruciating. These awful minigames are available in their own menu to be laughably played at will, but they’ve also been crammed into the various story scenarios, as if the game had been forced to fill some arbitrary gimmick checklist. 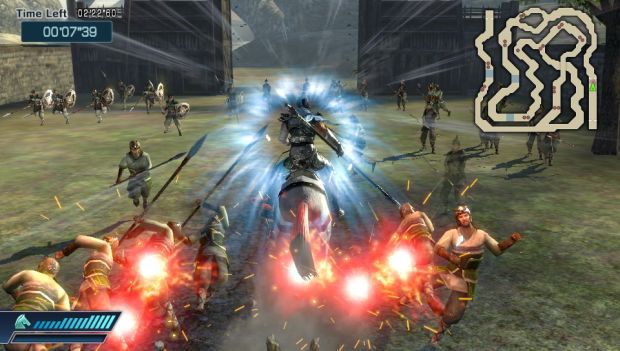 Players aren’t safe from this garbage during combat, either. Every now and then, one may be ambushed by opponents that need taking out in various ways. For instance, if a group of soldiers leap at you from the air, you’ll have to look around with the gyroscope and touch each one. Sometimes, arrows may fly at you and will need to rapidly swiped out of commission. These little ambush sections are cute at first, but quickly break the flow of the combat and serve only to take one out of the experience.

The most despicable example of forced touch control, however, comes in the form of duels. Roughly once per battle, an opposing warrior will take the player on in one-on-one combat, where battles are fought entirely via touch commands. It’s quite clear that Omega Force was attempting to copy Infinity Blade with these duels, but didn’t know how to do it properly. Rather than responsive, quick-paced, exciting touchscreen duels, the fights in NEXT are sluggish, insipid, dreary little affairs in which players spend most of their time watching the enemy have some sort of seizure as it tries to decide whether to block or attack. Players cannot dodge or block themselves, instead having to wait around until either an on-screen prompt tells them to attack, or the opponent is seen charging and provides an opportunity to interrupt. Every now and then, there will be weapon deadlock, where a rapid-fire series of circles must be touched on-screen, but otherwise these duels are about as exciting as a wet brick.

Dueling could have been an excellent extension of the game and even provided the PS Vita’s answer to Infinity Blade, but instead it exists as little more than an example of the gross incompetence that’s all too common with glorified tech demos. The fact that these duels cannot even be skipped, and appear so frequently, makes them all the more grotesque. 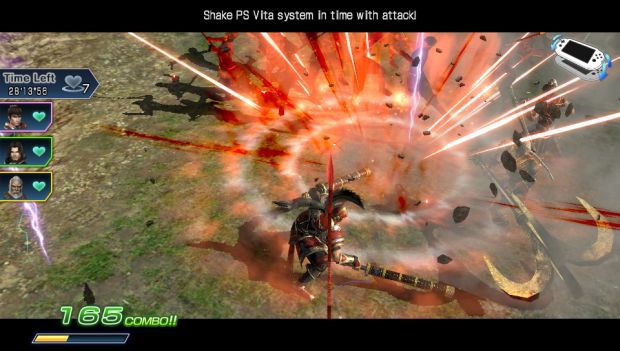 It’s sad that the touch interface so frequently drags the game down, because the core gameplay is still there and it works very well on the Vita. The button mashing combat is as amusing as ever, and the new focus on base capturing adds a much needed sense of strategy and thought for each battle. There’s also a returning edit mode, where original, player-created warriors can be created using items won during the course of play. These original characters may be used in Conquest mode, a set of non-story scenarios where territory is taken from any force the player chooses to tackle.

The most interesting part of Conquest is the online feature. Although there’s no head-to-head multiplayer, Dynasty Warriors NEXT collects data from other players and uses it to populate your game world. Characters created by other PS Vita owners can randomly challenge the player to duels, and they’ll show up as enemy generals in battle. Be warned, however, that many high level players are already filling the servers, so online mode will provide a very stiff challenge depending on who chooses to invade your game. This lottery, however, is what makes the mode so compelling, and lucky players can even capture and use other players’ user-created characters in their own game.

Though the Dynasty Warriors series has never been graphically impressive, NEXT manages to be one of the better looking Vita launch titles, especially with other, lazier games relying on PS2-era visuals. NEXT takes most of its assets from Dynasty Warriors 7, and boasts the full range of animations, as well as some decent reflection effects on the shiny armor. Every battle is also fully voiced, and brings with it that sweet hair metal soundtrack that fans have come to know and love. 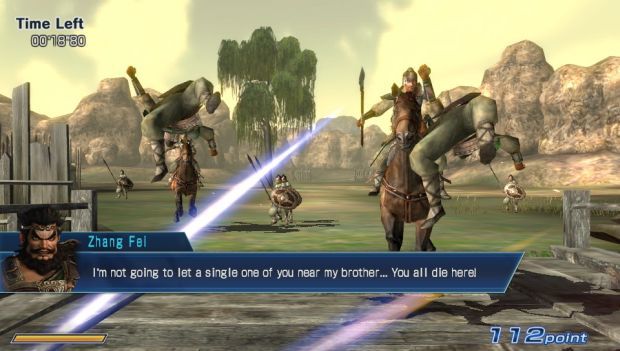 When Dynasty Warriors NEXT sticks to being an actual Dynasty Warriors game, there’s plenty to like about this PS Vita game. The battles are more strategic, the online features are intriguing, and it’s just great to have a good looking hack n’ slash title in your pocket. However, the game desperately wants to be counted among those early titles that show off the Vita’s extra features, but Omega Force simply isn’t good enough at exploiting them. Mandatory touchscreen duels and vapid tracing minigames aren’t what people play Dynasty Warriors for, and their presence in NEXT will only exasperate.

Awful obligatory minigames aside, there’s a solid game to enjoy at the core. You’ll just have to be a really big fan to suffer through the dire moments.