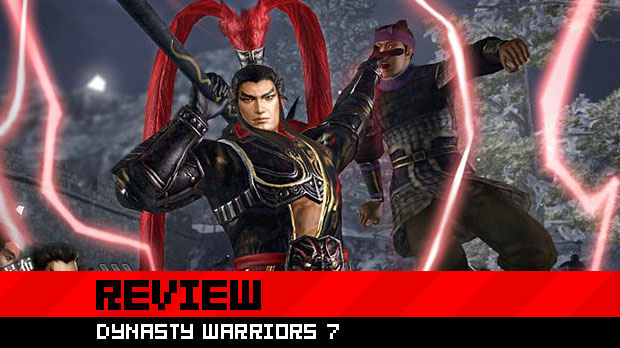 You all know the story by now. A new Dynasty Warriors game is released, it sells gangbusters in Japan, but gets trashed by Western reviewers who question why these games still get made, and who on Earth would play them.

Except on Destructoid, of course, where we actually review the games. Feel free to read on, as we review Dynasty Warriors 7. 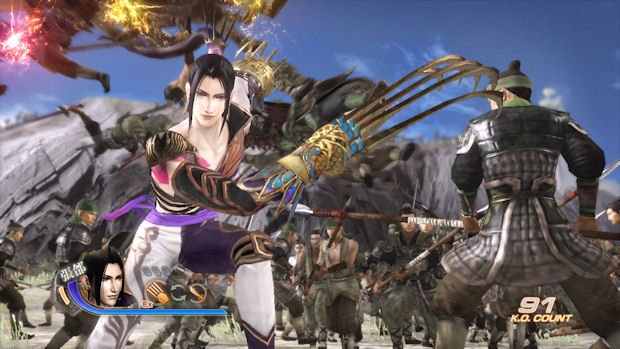 Dynasty Warriors 7 aims to be a much more story-driven, historically accurate experience this time, and this is evidenced in just how many changes have been made to the traditional formula in order to accommodate a cohesive narrative. Vague cutscenes that only mean something to people who have read Luo Guanzhong’s Romance of the Three Kingdoms are a thing of the past!

The game’s Story Mode boasts four faction-based campaigns — one each for Wei, Wu, Shu and the new kingdom of Jin. Unlike previous titles, where you pick your own characters to participate, Story Mode puts you in the shoes of a variety of generals, each stage specifically tailored to their particular exploits. While it takes getting used to, the change in characters makes for a more compelling story, as it details the history of the entire kingdom and the warriors that helped shaped it in a more detailed, structured way.

The story is surprisingly engaging too, at least if you have an interest in ancient China. Omega Force has crafted a relatively faithful story, with characters dying at their appointed times, and battles unfolding pretty much how they did according to legend. While the narrative won’t give your average BioWare title a run for its money, it’s a definite step up for the series, with four stories that are worth following. 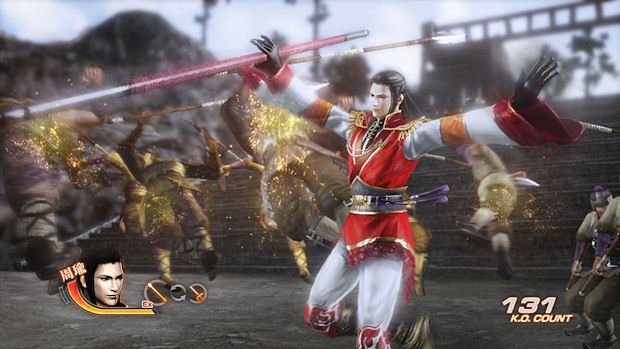 Of course, story has always been ancillary to the main focus of the game — frantic hack n’ slash combat. Dynasty Warriors 7 does away with the simplistic “Renbu” system from the previous game, returning to a slightly more engaging “Charge” combat system, in which strong attacks are inserted into strings of regular attacks to make new moves.

The combat feels faster and more intense than previous titles, and the focus on completing various objectives rather than simply defeating the enemy commander makes for a deeper experience. Indeed, failure to pay attention to objectives invariably leads to early defeat. It’s a mostly successful new way of presenting the action, except for the selection of missions that pollute the game. Babysitting mentally subnormal characters who like to get themselves eviscerated is not fun. Luckily, such missions are rather uncommon.

Dynasty Warriors 7 boasts an all-new weapon system to keep things spicy. Any two weapons can be equipped by any character, although the combat effectiveness of each armament differs between officers. One character may be an expert at axes, able to attack faster with them, but useless with clubs, meaning their attacks will be slow and easily broken. Every character is intrinsically linked to a single weapon type, called their “EX” weapon. Using a character’s EX weapon allows them to perform a unique special move with it. For example, equipping Xiahou Dun with a sword and performing his third charge attack will allow him to unleash a shockwave of fire. In addition, most weapons have a special “Seal” with various extra abilities (such as faster running speed or higher attack). Once unlocked, Seals can be placed into empty slots on any weapon. 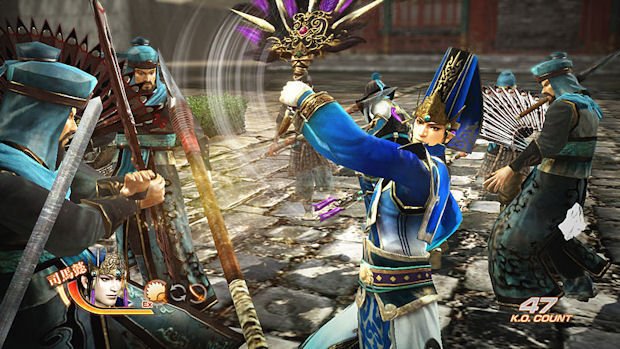 This system is pretty interesting, and collecting the game’s many item drops can be rewarding, but Omega Force has used the shared weaponry as an excuse to cut corners. Each weapon type has the exact same set of moves associated with it. For example, all sword-wielders will attack with identical combo patterns, making characters feel cloned. This wouldn’t be so bad if there was a wider arsenal with more unique arms to choose from. A large amount of characters all use swords as their EX weapons, and with such items so freely shared, it hardly seems like the game’s 62 characters are all that individual.

To the game’s credit, each officer has a unique Musou attack — deadly special moves that often result in the death of everything — and some lucky generals even get two of them. These moves, however, aren’t quite enough to distinguish those characters that wield overused weaponry like swords and pikes, especially once you realize that even some of the EX attacks have been cloned. There are also characters who just don’t fit their EX weapons — for example, the strategist’s fan was clearly designed entirely for Zhuge Liang, and it it doesn’t look right with Sima Yi, who has to share it.

It must be said that the fast paced combat does do a lot to make up for the cloned movesets, and there are a few unique EX weapons to play with, such as Sun Ce with his tonfas and Zhang He’s claws. For the most part, the musou and EX attacks do enough to make officers stand out, but you’ll definitely get sick and tired of using sword wielders before the day is done. 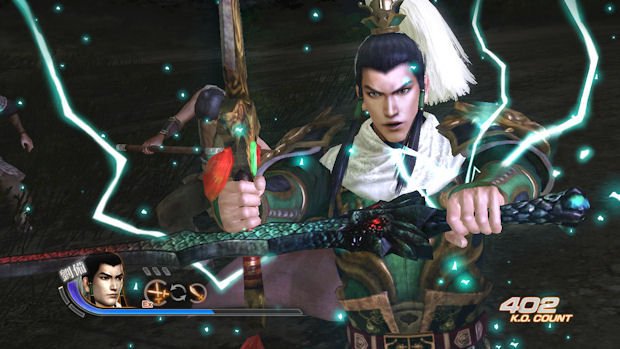 Dynasty Warriors 7 does away with Free Mode, in which officers can replay any story stage. Instead, we get Conquest Mode. In Conquest Mode, you can take any unlocked character onto a honeycomb map littered with battles, cities, and special objectives. Using Conquest Mode allows you to uncover new items, play character-specific historical stages that weren’t important enough for Story Mode, and build friendships with other characters who may later help you in battle. In addition, replaying stages will populate the map with new characters, making the combat feel a little more dynamic.

Conquest Mode is also where Omega Force has hidden the game’s online co-op, and I do mean hidden. Secluded in a sub-menu, the co-op is rather awkward to get into, as it requires players to actively request a co-op player and have another gamer online at the same time, looking for requests. So far, my attempt to connect to anybody have all failed.

Co-op failure aside, it’s a cool mode that is useful for grinding and there’s a significant amount of content to discover, but the setup and relatively shallow battles make it a poor replacement for Free Mode. There is no real reason why Free Mode should have been taken out, as the Story Mode battles could have easily been played without the character-exclusive cutscenes if need be. It just seems that, again, Omega Force took an easy excuse to be lazy. 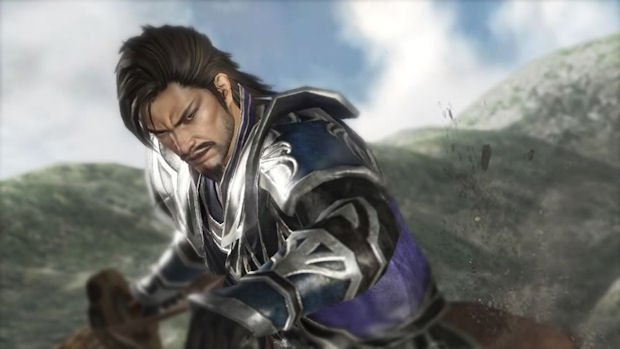 Speaking of lazy, hardcore fans will notice that Dynasty Warriors 7 recycles a few maps from Dynasty Warriors 6. While only the most dedicated fans will spot it, and even then, the maps have been aesthetically altered to keep them looking fresh, it’s really annoying to see a franchise that faces harsh judgement from the press do things to annoy even its most forgiving fans. Little things like this aren’t a massive issue, but they leave me scratching my head, wondering if the series wants to actively justify its criticism.

At least the game actually looks quite good. It’s no Crysis or Killzone, but Dynasty Warriors 7 is the first game in the series to actually look like a current generation title. The sun reflects off armor, weaponry is detailed, musou attacks are very flashy and characters no longer resemble vaguely upscaled PS2 models. The environments are still barren and flat to accommodate the volume of enemies onscreen, but at least those enemies aren’t hideous to behold. The game also supports 3D, if you have a TV capable of such feats.

The game’s voice acting does a good job when it’s not blatantly trying to lip-sync with the characters’ Japanese mouth movements, and the music — often a highlight of the franchise — is fairly decent, but not quite as great as past titles. The screeching hair metal is still there, but the tunes aren’t as memorable and a lot of the music is re-used rather than unique to each battle.

DW 7 has a lot going for it. It boasts more energy and heart than the Warriors franchise has seen in years, and it feels like the series has gotten a totally new burst of steam. It has the best combat system, the best narrative, the best content of any Warriors game to date, and it could have easily been the best Warriors game overall, if Omega Force hadn’t been so keen on saving itself a little extra work. More weapons, less clones, and a minor effort in re-tooling story maps for Free Mode would have made this title almost flawless. 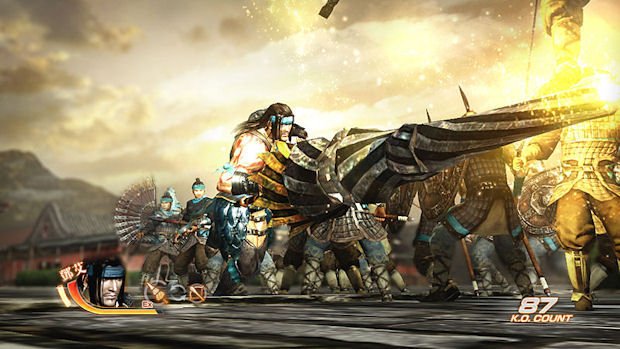 As it stands, Dynasty Warriors 7 is still a really great game that has potential to suck up hours upon hours of a hack n’ slash fan’s time. Each of the four story modes will take a few hours to complete, and Chronicle Mode will heap several hours on top of that. If you decide to level up characters and collect rare weapons, you’ll be spending even more time with it. Taking that into consideration, a few of the lazy decisions are at least a tiny bit forgivable.

If you’re no fan of the series, this title will not sway you. Those of us who dig the formula, however, will be able to spot the significant changes made to the series, and enjoy a huge amount of gameplay. The only thing holding it back is a handful of poor design decisions that let the experience down, but not quite enough to stop this being an engrossing, addictive button smasher.