Beat ’em ups have a pretty interesting history. After dominating the arcade scene in the 80s and 90s, the gaming community at large eventually clamored for more transcendent experience than just mashing a few buttons over and over until their short journey was through. So the once simple genre started to get more technical and borrow concepts from other games, such as RPG-like leveling systems, multiple movesets per character, combos, juggles, and so on.

Dusty Revenge attempts to combine a lot of neat ideas, on top of a fairly solid foundation with mechanics that function similarly to a fighting game. It just needs a bit more polish. 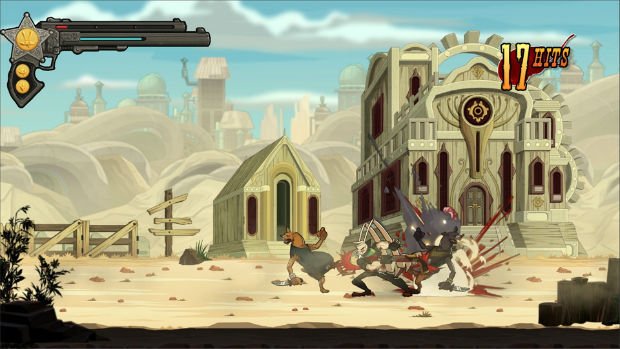 As you can probably tell, Dusty is a tale of revenge, told from the eyes of the titular protagonist. Unfortunately, Dusty’s wife is murdered for unknown reasons, and it’s your job to find out why, and punish everyone that gets in your way. It’s a story fit for a beat ’em up, as your going to do a lot of slashing and shooting on a constant basis.

Dusty has solid beat ’em up mechanics built in, including roll-cancelling, blocking, ranged attacks, and a weak/strong based combo system. There’s juggling, uppercuts, downward slashes, and frame specific combos, which helps mix up the variety a bit, and prevent you from just mashing one button over and over. All in all, it feels like a condensed 2D Devil May Cry 3, which is a great thing, and shows that PDDesignStudio really has a knack for designing technical action. 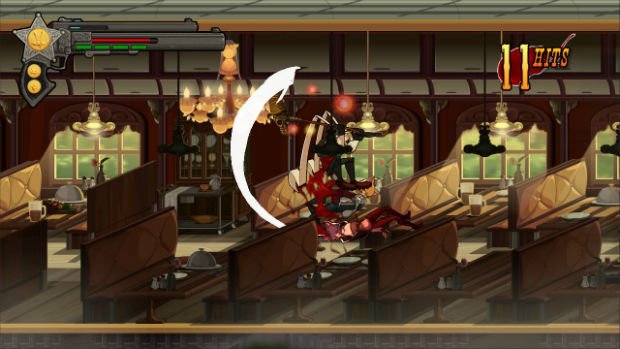 Rondel and McCoy, your trusty sidekicks, function as power-ups, basically. Provided you have a green ability bar handy, you can press the left directional pad to summon the grenade launcher totin’ Rondel on the side of the screen, or the sniper expert McCoy. The grenade launcher functions in an “arc” manner, similar to aiming a projectile in Angry Birds, and enacting McCoy’s power brings up your standard first-person-shooter reticle. While they’re doing their thing, Dusty is open for attack (albeit while blocking), which is a neat mechanic to keep you on your toes, forcing you to “get in and get out” without overstaying the duo’s welcome.

The game features a variety of settings, from your typical old west towns to caves, jungles, giant trees, and ancient ruins. Boss encounters not only fit the theme of the stage, but they remind me of true old school beat ’em up encounters, like the numerous memorable encounters with Bebop and Rocksteady in the string of Teenage Mutant Ninja Turtles arcade games. All along the way, the art is stunning, breaking the boundaries of an indie studio and venturing into major release territory.

But while Dusty has some gorgeous artwork accompanying its gameplay, it suffers from a very awkward presentation. For starters, the voice work and story-telling is very low budget, to the point where it detracts from the overall impact of the world, and causes it to be considerably less enjoyable. Dusty himself doesn’t sound either formidable, likeable, or memorable, which is a major problem since it causes a disconnect. None of the other characters in the game really succeed in making a connection either, even if the boss encounters themselves are very fun gameplay wise. In the end, the style feels a bit wasted on this universe. 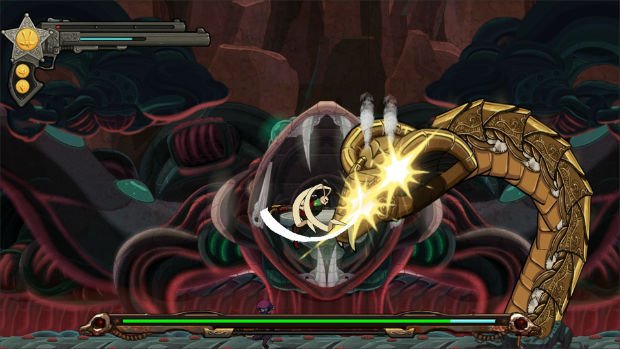 Beyond that, the rest of the experience also feels decidedly cheap at times, despite the strong combat foundation. To put it into perspective, imagine yourself ripping open your first chest in God of War. Kratos struggles at first, grunting to get to the health orbs inside, and a loud sound effect makes even the smallest of conquests dramatic — it adds to the chaotic atmosphere, drawing you further into the violence. In Dusty, you kind of just point your gun at a chest, and a very small “bang” (that’s barely audible) happens.

While this seems like a small potatoes complaint, the game’s effects for little things like this add up, and lack a certain impact that takes you out of the excitement, which slowly detracts from the heart-pumping action. I normally don’t mind lower budget affairs in the slightest, a few of these mishaps are design choices that could easily be altered.

As a side note, Dusty Revenge has no co-op or multiplayer modes. The whole experience is a few hours long, but that’s on the lengthy side in terms of beat ’em ups, with several unlockable extras and the aforementioned RPG progression system. 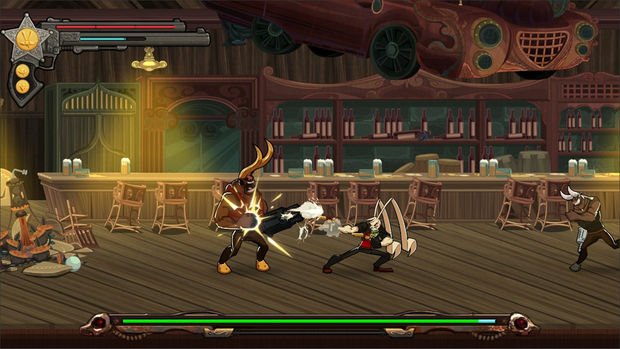 Dusty Revenge is a solid effort by PDDesignStudio, but it lacks the polish to really be put into the pantheon of brawlers. The good news is there’s tons of promise, the art style is gorgeous, and as a general rule, the technical systems are in place to really make things pop with a sequel. With a little more polish, Dusty Revenge would be a pretty decent recommendation, but until then, only the hardiest of brawler fans need to apply.