Your good friend Regis told me all about you.

It’s been five years since we last saw a new game based on Dungeons & Dragons. This seems like a long time, considering the tabletop RPG has never been far from video game adaptations. We last got Sword Coast Legends, and I’m sorry to have just reminded you about that. On the bright side, we’ve got Baldur’s Gate III to look forward to.

We also have Dungeons & Dragons: Dark Alliance, which is billed as a spiritual successor to the Baldur’s Gate: Dark Alliance games from way back. Technically. They’re all action RPGs and they’re set in the Forgotten Realms campaign, but that’s about it. There’s no narrative continuity and the gameplay is extremely divergent, so, emphasis on spiritual.

Here we join Drizzt Do’Urden, Catti-brie, Bruenor Battlehammer, and Wulfgar from R.A. Salvatore’s Legend of Drizzt series of novels. It’s their job to clean up a goblin problem the Dwarves seem to have. Or, as Catti-brie says in the most annoying voice possible: “Goblins! Goblins! Goblins!” Hilariously, my first experience in joining an online party was seeing another player’s character shimmy towards a chest, reversing direction every few seconds. Thankfully the rest of the game wasn’t as glitchy. As glitchy.

It’s not even that the game is unreasonably buggy, just extremely janky. The ragdoll is insane, with some enemies launching off into the sky when getting hit by an arrow, and others plummeting into the ground. But the day I complain about insane ragdoll is the day hell is colder than Icewind Dale.

The issue I did have with the jankiness comes down to responsiveness. The most irksome example of this is aiming a bow with Cattie-brie. You can charge your shots, but if you press the heavy attack button before she’s done nocking her next arrow, she does… nothing at all. She doesn’t start charging her next attack, she doesn’t fire an uncharged attack, she just stands there, waiting for you to notice her inactivity and press the button again.

It’s gluey one moment and overly sensitive the next. Why is it, when I’m aiming with crosshairs, Cattie-brie will jump into her explosive arrow attack because I gently pressed up and hit the arrow button. I get that’s what the command is, but you usually don’t want to fire a short-ranged attack when you’re using crosshairs. This seems like something that could have been easily refined.

I hate the lock-on system in Dark Alliance. Using it greatly narrows your vision and enemies will shamelessly attack from off-screen. If I ignored the lock-on targeting, I’d often have my hero miss the enemy completely, throwing a flurry of attacks at the air behind them. It’s embarrassing!

I keep calling reference to Cattie-brie because she was the only character I really enjoyed. The three other characters are melee-focused, and that comes down to a lot of button mashing. It’s not just down to misunderstanding the combat system either. Every party I was in, the other members would just rush in and start piling on a single target, mashing him to death and maybe dodging out when the big bad starts throwing a big attack. Meanwhile, I would just be sitting back and flinging arrows, kicking to death anyone who would come close.

Bruenor is supposed to be the tank character, and that works okay sometimes, but aggro is all over the place. Once, I was felled in combat, and the enemy that did me in just remained in place, slamming his fist into my lifeless body repeatedly, completely ignoring the threats that were all still around me.

The enemies are just plain daft at the best of times. In the chaos of four players diving into combat, the crappy AI isn’t always that noticeable until you take a closer look. They’re not very responsive to player actions, often taking their time to throw an attack under duress. There were many moments where my party would just beat on giant enemies, and they’d stand there taking it without even trying to defend themselves. 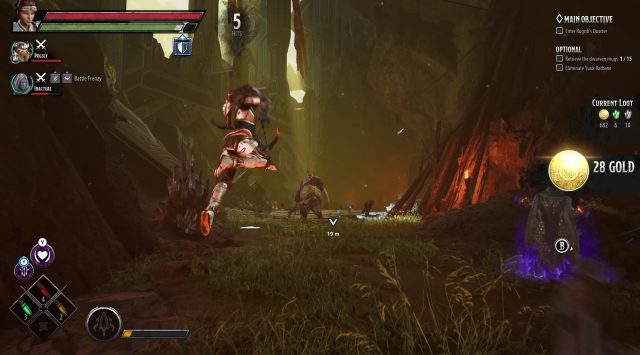 The difficulty is all over the place. You choose your level of difficulty on a scale with a recommendation being made based on your party strength, but it still fluctuates wildly. One of my first matches had the group practically walk through the level and topple the boss, except for this one area where we had to fight an almost unending supply of trolls that would corner one player and mash them into a paste. There was a lot of running around and reviving each other in the fight; another action enemies usually ignored.

The end boss of that chapter was laughable. We toppled it without exerting ourselves, and that just confused the party leader. “Oh, he has a second form,” he said when a cutscene kicked in. Nope, that was just an elaborate way of showing him die.

The enemy variety in Dark Alliance is dismal. Some of the bosses are the same as regular enemies, just a bit better buffed and sporting a name above their head. I think of any modern MMO, and their dungeons are filled with unique bosses that you topple on your way to the head cheese. That’s completely lacking here. It’s just wading through goblins, verbeeg, trolls, and cultists until you hit one with a name.

The environments elicit the same deja vu. There are a few that look unique, but most of the time you’re just fighting through corridors within some crag filled with cobblestone floors and frozen ledges. I get that this is supposed to take place within a single region of Icewind Dale, but maybe someone should have thrown down a rug, just to spiffy up some of these dungeons. You know, if they were expecting company. 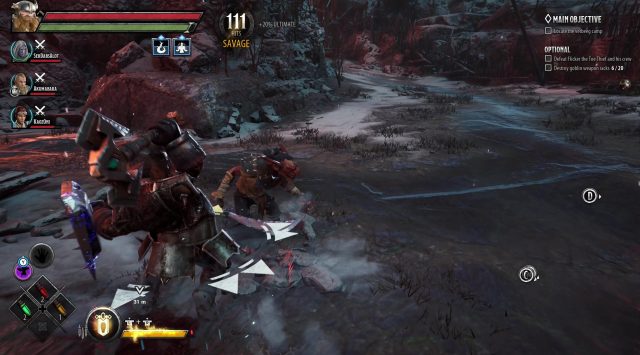 I wrack my brain trying to figure out Dark Alliance’s strengths, and I’m not coming up with much. The level design works surprisingly well for multiplayer. I was afraid looting would fall by the wayside, but every time a fight would wrap up, everyone would run off in different directions and grab chests before finally moving on. I didn’t feel like things were getting missed. Well, except for the shoes that would pop out of chests some other player would open. Those just rot, forgotten on the ground.

Okay, I screwed that one up. Its other strengths are… Let me put it gently: there is some promise to its multiplayer. If its control issues are mopped up and the enemies recover from their collective hangovers, Dark Alliance could be reasonable fun with friends. For a little while. I guess.