It’s been quite some time since we last saw Dungeon Siege, with the Dungeon Siege II: Broken World expansion pack released in 2006. Since then, the franchise has landed at the feet of role-playing powerhouse Square Enix and the fine –if notoriously glitch-loving — folk at Obsidian.

Featuring a streamlined progression system and a simple style of gameplay that’s easy to pick up, Dungeon Siege III immediately risks turning off hardcore role-playing game fans who demand deep customization and total control over their destiny. Then again, if you want a game that’s a veritable fortress of statistics, you probably weren’t looking in this direction to begin with.

Those still with me may want to consider checking this game out. 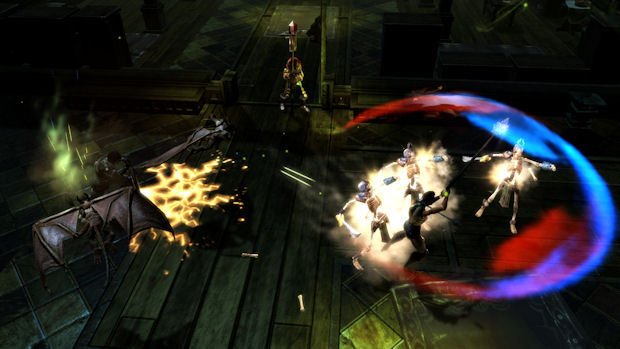 Dungeon Siege III‘s linear story takes us back to the Kingdom of Ehb and revolves around the Tenth Legion, a force decimated by a powerful conqueror known as Jeyne Kassynder. As one of four playable characters — Lucas Montbarron, Anjali, Reinhart Manx or Katarina — you are tasked with rebuilding the Legion, bringing Kassynder to justice, and saving Ehb in a fairly unremarkable but not unenjoyable narrative.

Each of the four characters has a distinct playstyle and a set of unique abilities. Lucas is your typical warrior, fighting with swords and shields. Anjali can switch between human and powerful Archon forms, wielding fire-based offensive abilities. Reinhart is a standard mage with a plethora of spells at his command, while Katarina is a ranged specialist, packing rifles and handguns that can be empowered with black magic.

Character development is some of the most simplistic you could ever expect to find in a Western role-playing game, and I suspect that hardcore PC gamers will not appreciate it. Each character has nine skills that are unlocked incrementally and can be strengthened with skill points. In addition, there are twelve passive attributes that have their own set of points. General statistics, such as attack power and health, are improved automatically and via the huge amount of equipment you can obtain.

Every ability carries with it two potential extra enhancements that are unlocked using ability points. These enhancements can be improved with further points, but you may only improve them up to five times. You can also choose to mix the enhancements. For instance, Katarina can earn the ability to summon a wolf. The wolf has two enhancements — one that boosts its HP and attack power, and another that gives Katarina HP every time it attacks. You can choose to sink all five of your enhancement points in boosting the wolf’s strength/HP, or you can sink all five into gaining superior health regeneration. Alternatively, you could sink three points in the wolf’s HP/attack, and two points in the health regain, so the wolf becomes slightly stronger and heals your character.

Despite that in-depth description, it’s a very easy and intuitive form of character progression, though one that is very restrictive. Dungeon Siege III‘s playable characters are strictly predetermined and your only real choice is the order in which you unlock skills and the minor way in which you enhance your pre-set abilities. It’s easy to get into, but there’s a definite lack of meat on some particularly solid bones.

Those looking for deep skill trees and manual stat tweaking will not get what they want out of this game. In what is both a blessing and a potential curse, Dungeon Siege III is very much a “casual” role-playing experience, in which most of the thinking has been done for you and your only concern is amassing vast quantities of loot while kicking the crap out of giant spiders and goblins. This approach will be seen by some as a “dumbed down” experience, but if you want a game that dispenses with busywork and gets right down to the acquisition of riches and power, then Dungeon Siege III provides the instant gratification you’re looking for. 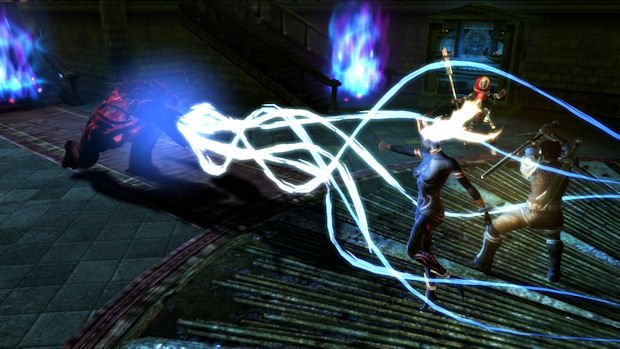 This no-nonsense approach to character building extends to the core gameplay as well. Combat is all about dodging, blocking and button mashing to spam attacks and special abilities. Console controllers seem specifically catered to, with abilities picked by hitting combinations of face and shoulder buttons in a fairly straightforward manner. You don’t even have to map abilities yourself — there are just enough special commands to fit onto a controller, and the game assigns everything for you in a way that’s incredibly easy to learn.

Despite the restrictions, Dungeon Siege III‘s fights are pretty satisfying, overall. At first, the game comes across as far too easy. The opening hour or two puts the players up against paper-thin enemies who fall to the blade without putting up much resistance. Once the game throws some more challenging enemies your way and your character gets a few interesting abilities, fights turn into a suitably action-packed affair and a number of later bosses will give out a decent fight, even if none of them will ever truly keep you stumped for long.

Part of the fun is in the unique balance the game strikes with your various powers. Most special abilities require Focus, represented by a blue gauge that fills up every time you land a regular attack on an enemy. Your healing or buffing skills require a separate magical energy that is only earned by using Focus skills. It’s not a system you start to take notice of until you gain multiple buffs, but once you do, there’s a terrific little system in play that encourages making use of every tool at a character’s disposal. 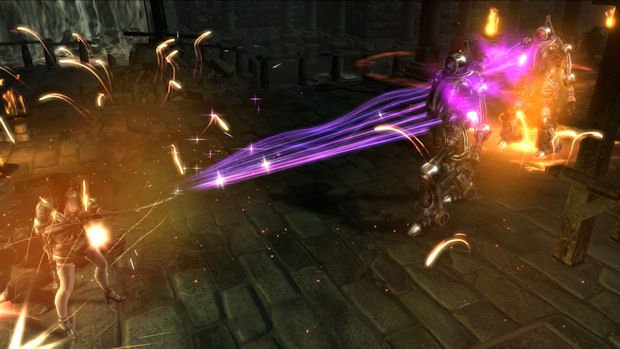 In single-player, you’re allowed to pick a single party member to accompany you, although you can switch that member out for another of the characters at any time. While generally a competent fighter, your AI ally has a tendency to run headfirst into danger and require revival. However, it will always drop whatever it’s doing and revive the player when needed, and it’s not shy about mopping up the gold after a fight. It’s just a shame that enemies will ignore the AI character completely in order to attack the player.

In fact, AI overall is a bit of an issue. Enemies have invisible boundaries that can be wholly exploited, especially in the earlier parts of the game. Opponents won’t cross a certain point, and if you have ranged attacks, it’s fairly easy to incite an enemy to give chase, cross the invisible barrier, and then launch an assault as the creature suddenly stops its pursuit and retreats. Later on in the game this becomes more obnoxious as enemies simply disappear into thin air and respawn at their starting positions once you cross an arbitrary threshold.

While I’m criticizing, I need to point out that targeting leaves a lot to be desired. I played as Katarina and I found the auto-target system for her ranged shots to be pretty poor. The character frequently favored enemies that were too far away to be a threat over the monster that was actively attacking her, and sometimes she’d just fire at nothing at all, despite the enemies stood right near her. At times, the targeting system appears to work well, and at others it doesn’t work at all. 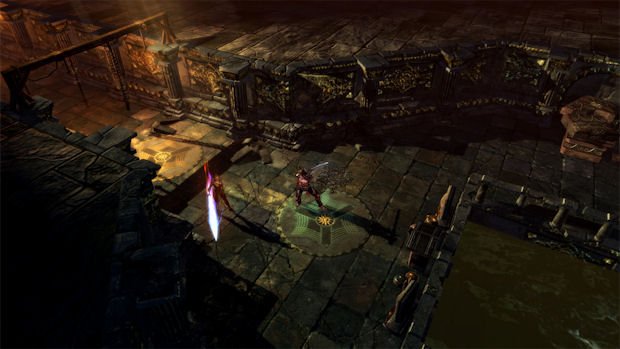 There are most certainly some annoying issues that are hard to ignore, but they didn’t stop me having fun with the title. As a single-player experience, Dungeon Siege III is a pleasing affair that lets you jump into an RPG experience without any hassle. I can appreciate a game that just throws the player into the action and lets them enjoy themselves without engaging in endless micromanagement. Deeper experiences are always welcome, but there’s plenty to be said for the more streamlined approach as well, and Dungeon Siege III is a fine example of that style.

The game took me around twelve hours to beat, and that was with me completing the side quests and taking my time to explore. If you just want to rush through the linear campaign, you’ll be able to complete it at a far swifter pace. Despite the game’s short length in comparison to other Western RPGs, I found Dungeon Siege III to have a satisfying amount of content to it. The bland but pleasant story wrapped up in a satisfying manner at just the right time, and I feel the game would outstay its welcome if it lasted much longer.

Drop in/drop out co-op is included, and I have to say that it’s an incredibly weak part of the game. For a start, there’s simply no benefit to a player who joins somebody else’s game. If you join another player’s quest, you do not get to take your own character — you simply inhabit the body of one of theirs. Furthermore, the camera freaks out when more than one player joins a game — it attempts to force all players to stay on the screen at all times, but frequently fails, and will end up with players stuck offscreen and unable to see where they’re going. 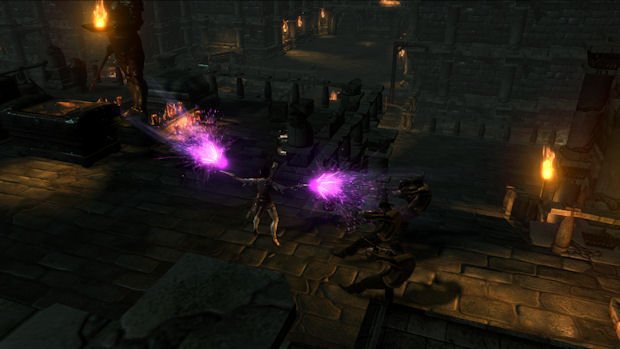 Although playing co-op is the only way to see all four characters fighting at the same time, there’s just no appreciable point to any of it. It’s great for the game’s host, but outside of some token Achievements/Trophies, there’s nothing in it for the rest of the party. They don’t get to take loot home with them and they don’t get to build their own characters. Such co-op is fine in genres such as first-person-shooting, where character development isn’t a goal, but in a game predominantly about acquiring fresh gear and earning experience, this method of co-op completely misses the point.

It’s a shame, because aside from the awful camera, the co-op features work pretty well. I was able to enjoy sessions without lag, and it’s pretty cool to see all four characters taking the fight to some monstrous insects. I just wish there was an actual incentive for everyone to play it.

The game looks pretty good, although it employs a strange artistic style in which characters go for a realistic look but sport stylized textures. It takes some getting used to, but every now and then one gets the jarring feeling that a character’s facial details haven’t loaded yet. I’m also thrilled to report that for an Obsidian game, there were no glitches encountered during my play. Music is used sparingly but is of the droll orchestral variety, and voice acting is competent and listenable, which is a high compliment as any in the field of videogame acting. 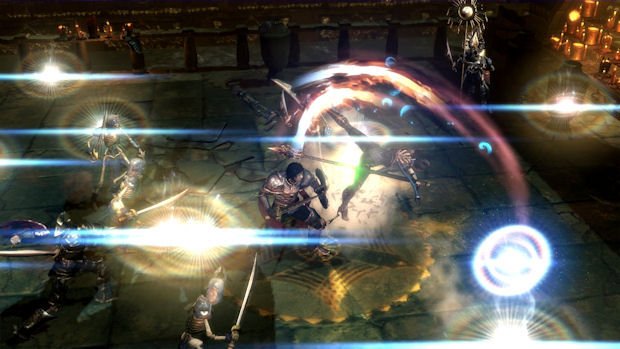 Dungeon Siege III most certainly isn’t for everybody. Many gamers expect their role-playing games to be far more involving than this one, especially in recent years. Obsidian, however, went with an unapologetic throwback to simpler hack n’ slash dungeon crawlers, and created a good little adventure because of it. It’s certainly more straightforward than most RPGs these days, but I don’t think the gameplay ultimately suffered because of it.

With better co-op, this could have been a truly great experience, but it’s still highly enjoyable, and you can’t demand much more than that.