Bullfrog’s 1997 strategy game Dungeon Keeper is a bona fide classic. It took the typical simulation conventions of the time and added some attitude, some horns, and a whole lot of charm to warp it into something truly special.

Leave it to EA then to come in and take a demonic dump on the franchise by creating a freemium “re-imagining” with timers and microtransactions. 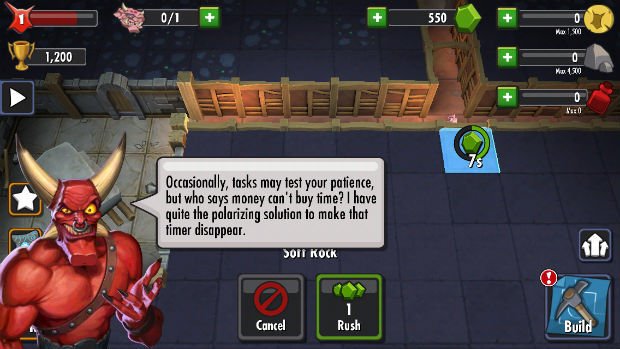 For the first few minutes, Dungeon Keeper mobile vaguely resembles the original game. You’ll slowly craft your own labyrinthine base of operations, hire creatures to defend it, and build a few structures to increase your influence. It’s all pretty standard as far as strategy games go, as sending off imps to dig new areas and expanding your keep is still satisfying, at least initially.

You’ll also have the ability to go on missions (raids) and attack enemy keeps, as well as defend your own with a host of traps and defensive troops. The main goal here is to go after the dungeon’s “heart,” which is more or less the lifeblood of the operation. In each raid, you’ll have to bypass the AI’s defenses and attack the heart. It’s a cool concept, but it gets dull when you realize that you have no control over the troops you summon, as you’re at the mercy of the game after you drop them in. Still, there’s fun to be had on many occasions with raids, as it mixes up the gameplay a bit and there’s a lot of them.

Then the freemium elements rushed in, and slapped me with a sack of spoiled potatoes across the face (seriously, look at the above screenshot). It gets really bad really fast, which is almost a record as far as freemium games go. After the tutorial, one of the first areas I attempted to excavate had a four-hour timer attached to it. If I wasn’t reviewing the game I would have quit right then and there. 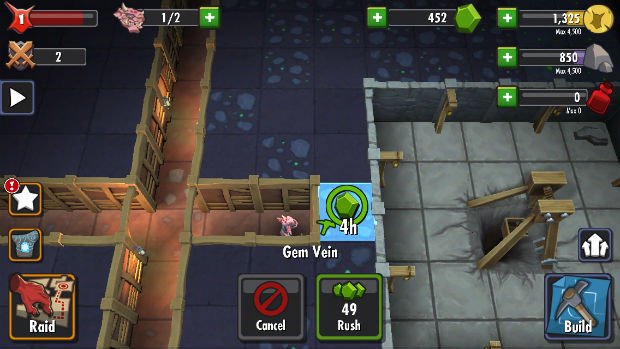 Waiting is the name of the game in Dungeon Keeper — in fact, it is the game unless you’re willing to shell out for more resources and crystals. You’ll excavate more areas of your base, then you’ll wait. You’ll wait to collect gold and stone in your appropriate mines, then tap the ore (it’s not automatically collected, so you have to log in periodically). You’ll queue up minions to go on a raid, then wait a bit. If you fail, you’ll have to wait some more before you get enough resources to launch another attack.

Time may be the ultimate boss of Dungeon Keeper mobile, but there’s a whole lot more on the microtransaction front. You can buy every type of resource, buy temporary boosts, buy long-term boosts, and pretty much everything that you could possibly want. The game will constantly remind you if this fact, as you slowly wait for everything to unfold before your eyes. It’s like EA saw dollar signs after the success of Clash of Clans, and wanted to clone it in the worst way possible — by using a respectable IP as its skin.

It’s a huge shame, because Dungeon Keeper is such a great franchise. I vividly remember getting hooked on the original for the very first time, and hooking in non-strategy fans with its unique perspective and visual style. But you’re getting none of that here, as you’re instead presented with a hollow freemium shell of what once was. Do yourself a favor and go to GOG.com and grab the original.