They say you should never meet your heroes, as you’ll only ever be disappointed. I think the same thing can be said for videogames that have accrued over a decade of expectations and hype. If you never play it, at least in your mind it will always be everything you ever wanted.

If you play Duke Nukem Forever, you’ll be slapped in the face by reality. The reality of Duke Nukem as a character, as an IP, and as a highly anticipated videogame is in stark contrast to the idea of a charming, cool, and hilarious series that years of delusion and marketing have concocted.

The reality of Duke Nukem Forever is that it’s absolute garbage that should have stayed confined to the bowels of Development Hell. 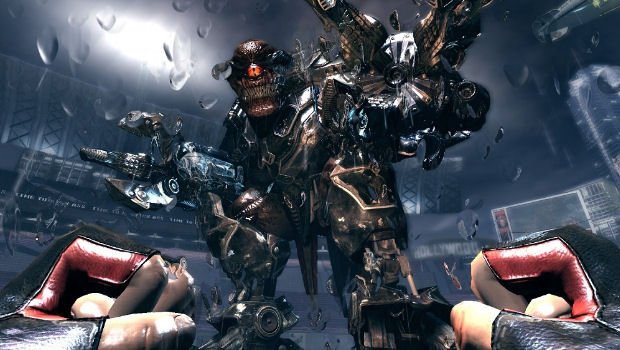 You know the story by now. It’s been over ten years since talk first started of Duke Nukem Forever. Long considered the epitome of vaporware, this game has survived in the social consciousness through developer layoffs, studio closures, and bitter legal struggles. It was Gearbox Software that finally got its hands on the Duke Nukem Forever license and committed to finally releasing it. Now the day many never thought possible has come, and we’re all supposed to be grateful.

Duke Nukem Forever‘s history is a lengthy and notorious one, and one that we cannot help but remember when talking about the game. The game itself goes to great lengths to remind you of it at every turn with an overdose of self-referential sight gags. However, when looking at the game as it exists today, one must divorce one’s self from that history and examine what, exactly, 2K Games is giving us for our sixty dollars.

That’s when you realize that 2K is trying to pull a fast one. 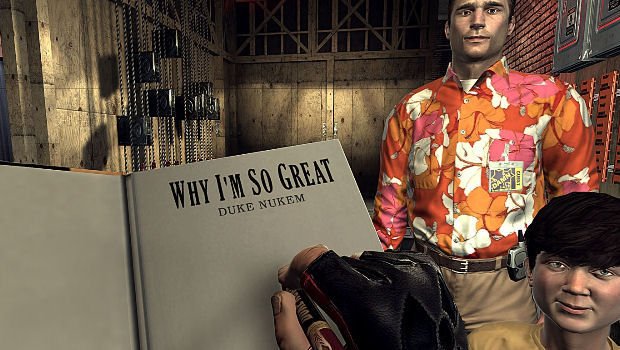 Duke Nukem Forever is an ugly game, both in terms of visuals and gameplay. It’s hardly surprising that software over a decade past its due date plays like an artifact from a past age. In fact, under certain conditions, that could almost be considered charming. Some may defend the game for “deliberately” evoking an early nineties charm, but here’s the thing — even for a game from the nineties, Duke Nukem Forever isn’t very good. It’s simply not fun and that’s the cold, hard truth.

For a game that prides itself on being a big, dumb shooter, you’ll be surprised to note that the game features comparatively little shooting. A huge portion of the game is given over to awkward, badly designed first-person platforming and physics puzzles ripped straight out of Half-Life 2, with not even a fraction of the ingenuity found in Valve’s games. After the rehash of the Duke Nukem 3D boss fight at the start of the game, it’ll take thirty minutes before you’re even given a gun.

If you’re expecting a non-stop rollercoaster of violence, then prepare to be disappointed. Instead, look forward to making Duke jump around with horrible controls that see him sliding off and bouncing from surfaces more often than not. Look forward to mind-numbing sections in which you find barrels to weigh down cranes. Look forward to an entire level where you have no weapons or combat, and instead need to find three random items to give to somebody for no good reason whatsoever, before being rewarded with ten seconds of unnervingly animated lap dancing.

There’s also a ton of mini games to play. Interactive objects often give Duke a permanent Ego (health) boost, so it’s worth playing with everything. Slot machines, frisbees, and pinball machines are all in attendance, providing minutes of humdrum busywork to get in the way of the combat. 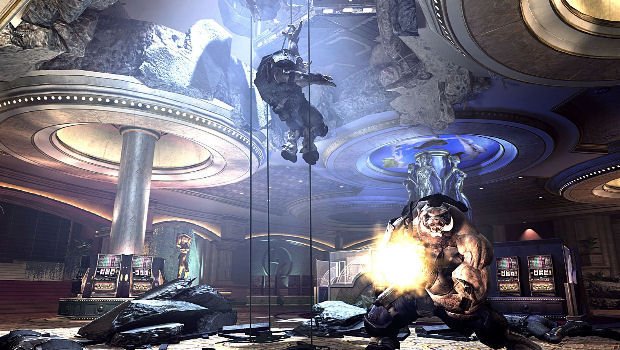 The sad thing is that these boring sequences are among the game’s highlights. When it comes time to finally pick up one of the many dull guns and fight the many dull enemies, it doesn’t take long to conclude that shooting leaves a lot to be desired. It’s a sad fact that even by the standards of ten years ago, this is a pretty mediocre experience. Combat creeps along at a sluggish pace and the lazy attempt at challenge consists solely of the huge amount of damage that opponents dish out compared to the ludicrous volume of ammo it requires to kill any of them.

The game features a number of weapons, but strangely for a game so proud of its nineties roots, you’re stuck to the modern contrivance of carrying two guns at a time. This wouldn’t be a big deal if enemies weren’t such bullet sponges and the weapons had any semblance of accuracy to them. This is not the case. Weapons feel fairly ineffectual, and the melee attack only occasionally connects with enemies. Duke himself is an incapable fighter. I’d go as far as to call him a pussy.

From regular fights to boss encounters, the whole experience is a listless affair with little incentive for the player to feel invested in any way. This extends to the game’s so-called humor as well, which will rightly be viewed as tasteless at best and downright disturbing at worst. For the most part, DNF‘s comedy is the same tawdry laundry list of outdated memes and nonsensical pop culture references that we’ve come to expect, but at times, the game’s attempts to be funny come off as downright horrific. 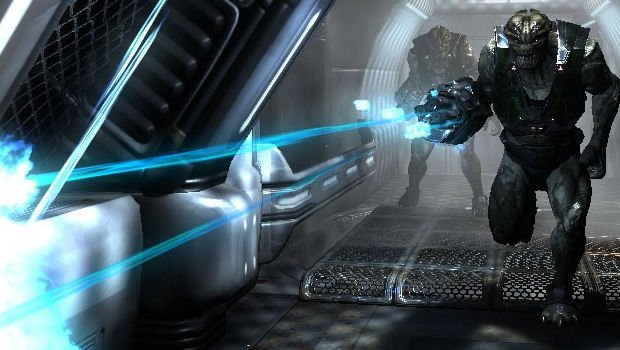 One level in particular takes place in an alien nest where Earth’s women are being inseminated by giant penises. The women writhe and moan in a fairly humiliating fashion, and they regularly sob with no small amount of implied misery. In essence, the women look like they’re getting raped. In fact, they are. That’s the big joke of the level. The aliens are raping the women to create babies. Now, I’m a fan of offensive humor, but the “joke” in this level is so morbidly presented, so dark and downright unsettling, that I simply do not know if Gearbox intends for us to laugh or to throw up. I certainly found I was in danger of doing the latter over the former.

By the time Duke Nukem finally makes a “You’re fucked,” joke, which he makes in front of two girls who are about to die in the process of getting sexually assaulted, Duke does not come across as cool, witty or likable in the least. He comes across as a vile, callous, thoroughly detestable psychopath.

It’s not impossible to make an alien rape joke amusing if you’re clever enough, but the fact that nobody making this game actually bothered to try is what really concerns me. According to Gearbox, seeing women tortured was funny enough. According to common sense, it really, really wasn’t.

This is the real core problem with Duke Nukem Forever. It’s not a funny game. It’s a disgusting one, and this is coming from someone who has laughed at jokes concerning every social taboo and tragedy imaginable. The issue stems from the fact that there’s no irony or punchline. There’s no attempt to make the “jokes” ridiculous — in fact, there are barely any appreciable jokes at all. We simply have Duke Nukem, with his disembodied and dispassionate voice, regurgitating out-of-place movie quotes and sounding bored to be there. Such a flat and humorless performance just doesn’t work when set against the grisly concepts DNF attempts to make fun of. 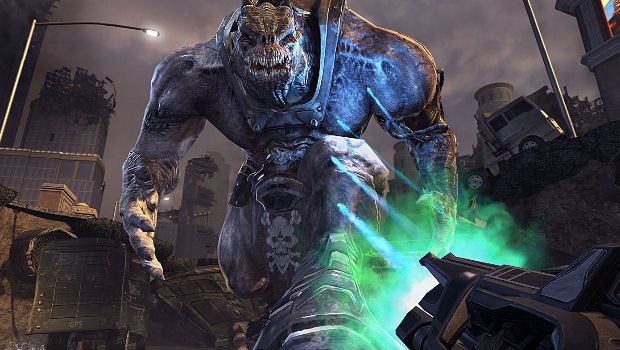 I struggled to raise a smile once during my playthrough. There’s one slightly cute joke aimed at Halo, but that gag is overshadowed by my predominant thought that Duke Nukem Forever has no right to make fun of other videogames. That one moment aside, I was unable to attain any kind of emotion from the game at all, except utter boredom and a desire to play something far superior, like Painkiller or Serious Sam — two games that are also pretty damn old but manage to provide exhilarating, fast-paced combat and plenty of weapons. Concepts DNF knows nothing of.

Certain players may kid themselves into thinking the game will get better. The fact that it’s so inconsistent in quality will help this self delusion to propagate. Some levels are clearly of higher quality than others, leading to a game that feels stitched together from random bits of code found on the floor. Occasionally, a level looks graphically superior and features smoother gameplay. The next level may look like crap and play just as badly.

The only thing consistent about Duke Nukem Forever is how tiresome it is. Whether you’re engaged in another droll turret sequence, or trying to stop Duke sticking to bits of random debris on the floor, or attempting to get him through a door that’s too small for him in a miserable underwater level before he drowns, or taking part in an uninspired vehicular section, you can always bet on Duke to deliver the very best examples of thorough mediocrity. 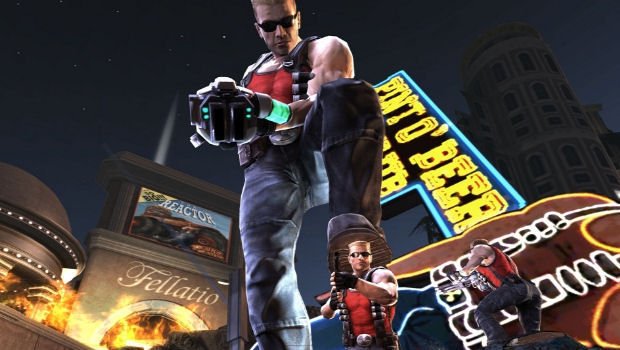 There is a multiplayer offering and this is where it’s really fair to talk about how dated the game is. The three modes — Deathmatch, Team Deathmatch and Capture the Babe (like Capture the Flag, but with women dressed as schoolgirls), can be described as “rough” by only the very kindest of humans. The less kind can call it complete shite.

With its dreary maps, piss-poor targeting and sloppy run-and-gun combat, Duke’s multiplayer somehow manages to be even less compelling than the dire campaign. A few modern concessions have been made — you earn Experience points to level up and acquire new items for an interactive mansion — but for the most part, this is the kind of gameplay you can still get by booting up Quake. Except of course, Quake is better.

We briefly touched on the graphics, but let it be known that you can expect a hideous looking creatures to assault your eyes. You can tell where token efforts were made to bring DNF up to par, but such efforts were wasted. Of particular note are the various non-player characters, some of which aren’t even animated and simply stand like terrifying statues. Those that are animated walk like they’re trying not to shit themselves. When it comes time to see Duke’s “Babes” attempt to get sexy and pose seductively for you, the whole affair becomes rather nightmarish. The only people who could get off to this game are the criminally insane.

To say Duke Nukem Forever is a relic is redundant. Many people have come to accept this and some are ready to forgive the archaic design and nasty visuals simply based on the game’s history. History, however, is no excuse for creative poverty. The game is simply bad by any standard, and if nobody was able to make it good enough, then it should have stayed unfinished and unreleased. The fact DNF demands $60 for such an ugly, boring, malodorous experience is the final insult. 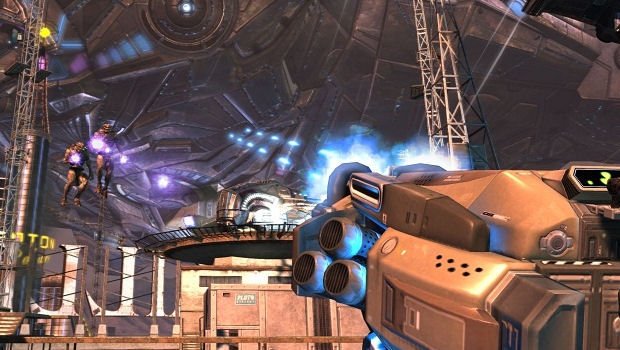 Duke Nukem Forever is a festering irrelevance with nothing to offer the world. It’s a game with an odious personality, one that could only endear itself to the sociopathic and mentally maladjusted. There may be life in Duke yet, but not his current incarnation. Not while his developers legitimately think he’s cool and hilarious, rather than creepy and nauseating, and not while he’s starring in games that can’t even compete with budget titles, let alone the AAA experiences that Duke Nukem Forever arrogantly launches alongside.

The game will sell well based on pure hype and audacity, but history will not look favorably upon this game. Nor should it. Nobody should think kindly of such a miserable, lifeless, grotesque little game.