Still ain’t afraid of no Quake

When I was younger, Duke Nukem 3D had a “parental lock” option with a passcode. Naturally, as any inquisitive child would do, I backed up my save files, uninstalled the game, re-installed it, and set up a new jibberish password that way my parents would assume they forgot the code or there was an error with the game.

With or without the adult content, Duke was one of my most cherished shooters. Although it is decidedly dated by today’s standards, its massive 10-weapon loadout featured a ton of diversity, and the environments contained some of the best hidden areas in the genre, even today.

It’s a bit of a relic, but Duke Nukem 3D: Megaton Edition is an endeavor worth pursing if you have any interest in first-person shooters, and can deal without a handful of modern conveniences. 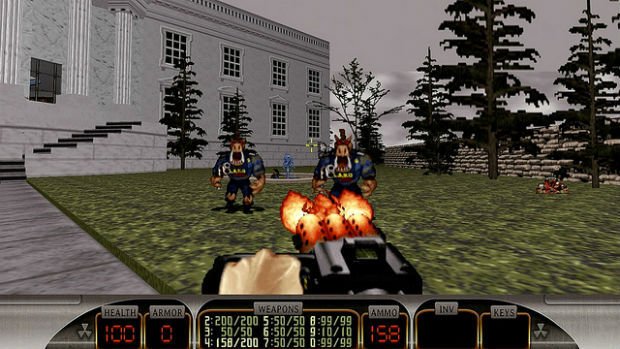 With its numerous references to Evil Dead, They Live, and other cult classics, Duke 3D was far more than just stripper and potty humor. Duke had morphed from a relatively safe action hero stereotype in his older days to full-on camp, and the tone was spot-on. Without a bit of nostalgia though a lot of the jokes are going to fall flat, and I suspect some of the younger audience may not even know what he’s referencing. In other words, your mileage may vary in terms of the game’s personality. I’m just glad that the game hasn’t been censored in any way in the re-release.

Everyone is likely to enjoy the superb map design from 3D Realms. This was back during the glory days of the FPS campaign, where nearly every room holds a hidden switch or hollow wall ready to be blown up. Every single stage in Duke 3D is littered with secrets, from references to cold hard power-ups. It’s a joy to replay the game again and try to find everything — heck, I’m finding new secrets almost 20 years later in Megaton.

What you’re getting for your $9.99 is all four “official” episodes of Duke 3D (with four difficulty settings), which feature 8-10 levels each, in addition to three classic independently developed episodes with unique themes. Duke Caribbean: Life’s a Beach is the clear-cut winner of the extra packs, as it re-themes the game to the tune of a tropical vacation, complete with water pistols and Super Soaker shotguns — also, all the enemies are hilariously decked out in vacation garb. 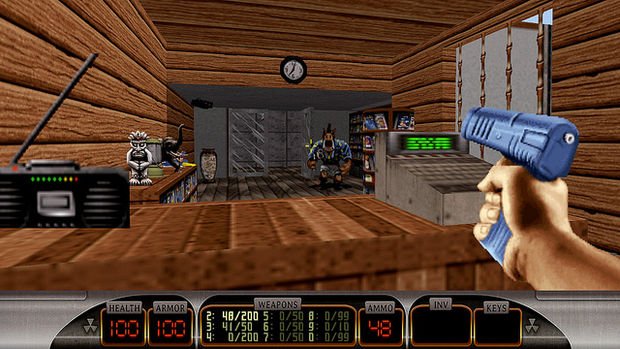 Duke it out in D.C. isn’t so hot, as the level designs tend to be a bit on the boring side at times, and aren’t as tight as you’d expect from the rest of the game. Duke: Nuclear Winter, a tale that sees Duke charge into the North Pole, is the weakest entry, but still worth playing if you’ve exhausted everything else. These packs aren’t new content as they were available on the PC in 1997, but they were difficult to find even if you were a Duke fan back then, and it’s nice to see them finally hit the PS3 and Vita for the first time.

As far as the controls go on the Vita, everything is very straight-forward and seamlessly integrated with the portable’s limitations in mind. A quick tap on the left or right side of the screen will switch your weapons respectively on the selection list, and you can give the d-pad a quick tap to toggle “run mode,” which is the equivalent of holding down the shift key on the PC. The weapon-switch system is instant, and works far better than I thought it would.

Another addition in Megaton is the power to rewind time after a death and replay from any point in a stage. This is a great option for newcomers as some levels tend to be pretty punishing, and without knowing where everything is, lengthy. That way you won’t get too frustrated as you attempt to plow through a level and can stop and smell the roses. Sadly, this is compounded with an odd system that locks you out of stages you haven’t completed yet in an episode, so you’ll have to do everything in sequential order. For a game that’s nearly two decades old that limitation seems pointless. 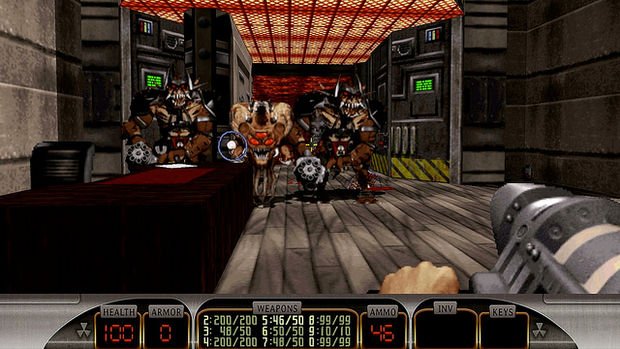 Online multiplayer for up to eight participants is in, with both one-on-one and free-for-all options, as well as a cooperative feature. Ranked and unranked options are available, but I doubt the community will be large enough (or be around long enough) to really justify a difference between the two. Having said that, I was able to jump into multiple matches within minutes since launch, and they were a blast.

Keep in mind though that returning players will have the advantage, as the “arenas” are just glorified levels from the game — secret rooms and all. Also, since everyone will likely have auto-run on all the time, it feels like a hyper turbo old school FPS with janky visuals, which is going to be nigh impossible for some people to get used to. Despite that, this is still one of the only online shooters were you can stop and urinate in the middle of a match.

Duke Nukem 3D: Megaton Edition isn’t a fancy HD remaster, but for 10 bucks it’s worth digging into for old and new fans alike. Despite the old school feel, the level design holds up tremendously. So long as you can deal with some over-the-top humor, you’ll have fun with Duke all over again.