Driveclub was supposed to be a launch day title for the PS4, but it was delayed for a while, pushing back until now. We got our hands on it at the E3 following the PS4 announcement last year and thought it needed more time in the oven, so a delay was actually welcome.

But that was a long delay. So, how much of a difference has a year made? 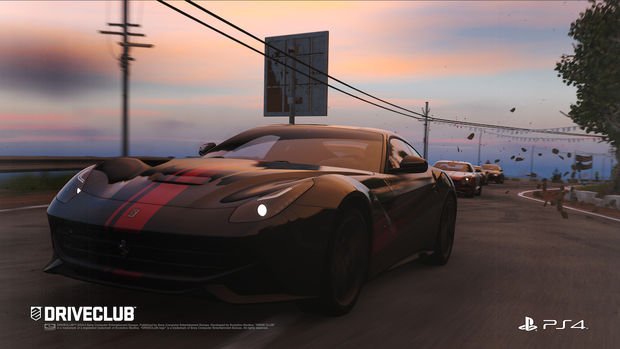 Evolution Studios, the folks behind the MotorStorm games, wanted to create a racer where everyone would play together in one big racing hangout. Driveclub is that. Its strongest point is that it is smartly networked so that even single-player events’ scores and times are automatically compared to your friends’ results, making for instant competition fuel. Leaderboards exist for nearly every trackable aspect of Driveclub, and the game’s Social Hub keeps you up to date on yours and others’ stats. Being online also adds pop-up challenges to just about every race. The connective-ness of it all really does have it feeling like a big, digital hangout.

And then there’s the actual club aspect of the game, which lets you team up with five friends to work through the game as a group. Your successes benefit the rest of the team along the way, with points going to each member for taking on challenges. When you earn new rides or access, your club members do, too.

Driveclub has a single-player mode that branches into single races and a full career mode, and a multiplayer mode that relies heavily on the social system. All of these modes will eventually put you into about four dozen of the hottest cars and just as many tracks, based on locations around the world. With its challenges and face-offs, slick environmental system, strong course visuals, and constant online connectivity, it always feels like there’s something to do or see. 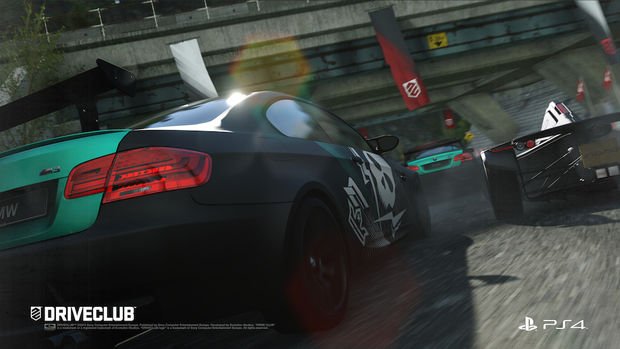 But when you boil it down, you’re only really taking on three race types in Driveclub: time trials, standard races, and drifting challenges — a pretty short list. There’s nothing like rally or snow racing to mix things up. That all said, even after a couple of weeks of play, I have yet to grow bored of the racing. I suppose this is a testament to the strength of Driveclub‘s connectivity and social features.

For as big as it is, there’s a refreshing core that makes Driveclub incredibly accessible. You simply get in the car and drive; there’s nothing in the way of tuning or customization, save for a few color/coat options. In fact, outside of Auto/Manual transmission selection, there isn’t anything you can change. Everyone is on the same page. Those that like the tinker under the hood may be disappointed at how locked down Driveclub is, but I’d bet that the majority of those that will play the game wouldn’t bother if the option did exist.

That’s not to say that you can’t change any options.  Driveclub has six camera views to choose from, all of which have their uses. There are two third-person views, a clean first-person view, a hood view, and two interior views. The two in-car views (cockpit and hood/partial dashboard) are among the best I’ve ever seen in a racing game. Both sport slick reflective modeling on the windshield, making the view impressively realistic. Under bright light the reflection is sometimes a bit too strong, though. And I wish the height of the behind-glass hood view was a tad bit higher. 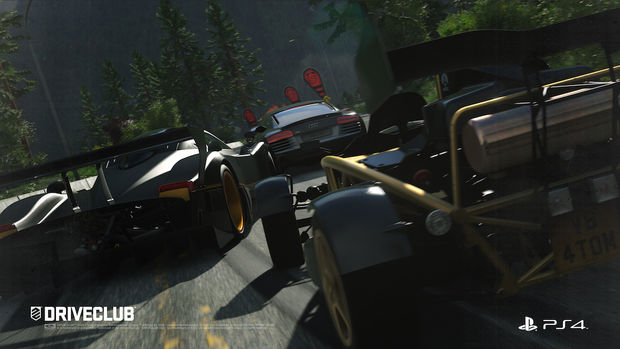 The single-player tour has you on the path Evolution has picked, in the cars they’ve chosen, racing on the the track they’ve set up. In other words, this is a pretty straightforward career mode. While it branches out a bit with more event types after a few events have been completed, you’re still basically on the course they’ve set. Each of the events has its own requirements, which, when completed successfully, earns you a star. Subsequent event groups are unlocked at set star levels.

Aside from stars, every event and challenge earns you Fame points. These points are at the heart of the game’s leveling system, allowing you to unlock more of the game as you play. The better you play, the more points you earn. In classic form, you’ll race, eventually place, and then earn new cars and tracks with these points. Club activities also earn you points.

Multiplayer has a few different faces in Driveclub. Asynchronous functionality lets you send your just-completed races as challenges, essentially copying your exact race for others to go up against when they’re ready to. They’ve made it really easy to issue a challenge, making for nearly endless competitive play. Conversely, the social system lets you browse others’ accomplishments and tackle them as you please. It’s kind of like picking a fight.

Of course, there’s also live multiplayer races to take part in. Driveclub digs through your friends list and tells you who is playing, making matches very easy to put together. The game does a nice job of keeping what’s going on in your face at all times, again, making you feel like you’re hanging out in a big racing event with everyone else.

The panel-based menu system that lets you do all of this is sufficient, but I wouldn’t call it elegant. Sometimes you’ll find yourself in a menu loop when trying to find how to accomplish a task, especially on the social side. To be fair, there’s a lot of information to be presented. But it would be nice to, say, be able to sort through the list of friends’ results by race type. The system could use a bit more polish. There are some bugs, too. I ran into plenty of errors and stalls while trying to join or create multiplayer sessions. Hopefully these will be ironed out in patch releases. 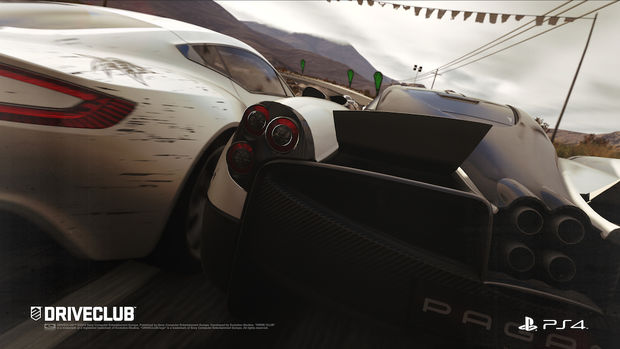 The driving feel of Driveclub rides a pretty confident line between simulation and arcade racing, which is impressive to this fan of both sides of racing games. I immediately grinned at the super-assisted cornering and braking as I barreled into my first corner at too-fast speeds without consequence. This means that those just looking for some casual fun will have no problems here. But, unlike some of the more casual arcade racers, Driveclub is respectably responsive and seems to have some solid physics foundations under the hood. This all means that you can approach things like drafting and cornering by the book, or you can just go nuts with the drifting and sliding. You can’t please everyone, but this racing fan was mostly satisfied.

I found myself completely in the zone when it came to time attacks and other driving challenges, as Driveclub‘s feel is very easy to get into. But I was literally knocked out of the zone by the constant AI car bashing. This is my biggest problem with Driveclub — the constant crashing from the single-player AI cars.

Yes, avoiding collisions is a part of racing, but there were too many instances during my time with Driveclub where they felt unavoidable. Pretty much every single race I took part in had me playing what felt like bumper cars with AI cars in some way. At best, I’d get an unfair bump off the road by a passing car during the last stretch of the last lap of a race, knocking me off the road, taking my chances of a podium finish off the table. At worst, AI cars would ram me from behind, smashing me into a wall, making the time spent racing up until that point fully wasted. There have been several instances of an unexpected, unwarranted AI car crash resulting in me earning a collision or cornering penalty. Imagine having your car temporarily throttled for something you didn’t do. That’s not fun at all.

Constant, senseless crashing made Driveclub‘s single-player tour mode feel like being stuck in the worst version of online racing at times. Crashing is a part of racing — sure. But the frequency in this case is highly frustrating, so much so that having to take on any challenge against other cars really started to feel like a chore. 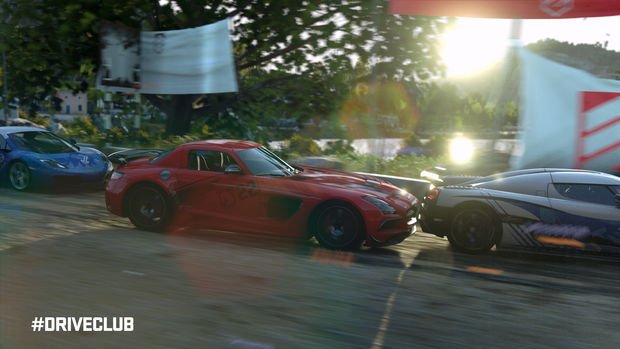 Thankfully, after unlocking cars and courses, you can play Driveclub against real people and not have to worry about the crashy AI. If you’re not fully leveled up, the game will loan you cars until you are. Even with as much as I dislike the constant crashing in the tour mode, Driveclub still has legs with the wealth of multiplayer and challenge options.

It helps that Driveclub is very nice to look at. The cars models are highly detailed and very easy on the eyes. But the courses take the cake here. The beauty of the sun beams flooding the spaces between the trees in the surrounding forests are almost distracting in one course. Snowy mountain passes, dirty back roads, lakeside drives — all of it lovely, and all serve to show what the next generation of racers should look like.

It’s too bad about the infrequent weird visual bugs, especially in the in-car views. Floating gauges and highlights from the environment looked to be pasted on the windshield at times, like weird decorative stickers. Other times I saw floating semi-transparent boxes obscuring the race view in first-person modes, sometimes way in the distance, and others just at the corner of my view. When glitches distract from or obscure the player’s view like this, it’s hard to overlook them.

But it always sounds good. The sound coming from some of the cars in Driveclub is so good that gear heads might fight themselves salivating. Engines roar convincingly, always making beautiful noise as you race. Equally impressive is the treatment of car sounds to fit the visuals. The in-car views in particular have it sounding like the car’s machinery is just beyond the monitor. 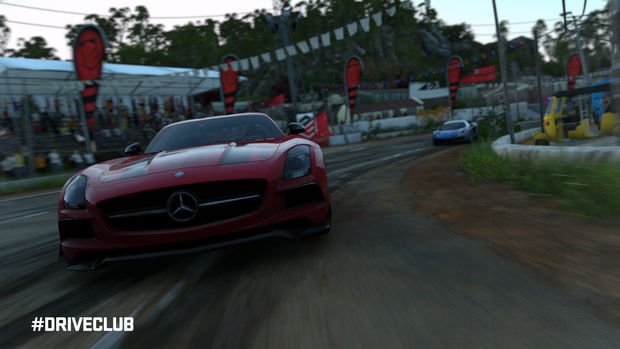 Driveclub is fast and easy to get into, nice to look at, and it has a lot going on in the background to keep you connected and competitive with your club members and other individuals. But that doesn’t change the issues in the foreground. Its approachable and enjoyable racing is marred by AI cars that love to unfairly bash and crash on the single-player side. And bugs with the interface and the networking kept me from fully enjoying the multiplayer side. Beyond all of this, it feels like Driveclub needs more race and event types. What it offers has kept me going for a couple of weeks, but how much longer will it continue to do so?

It’s then fitting that Driveclub will be offered in a free form for PlayStation Plus users. The offering gives players about a fifth of the full game’s total cars and tracks, but is otherwise unlocked for exploration both offline and on. Players can see for themselves if Driveclub has enough to offer over other new and upcoming racing alternatives out there.