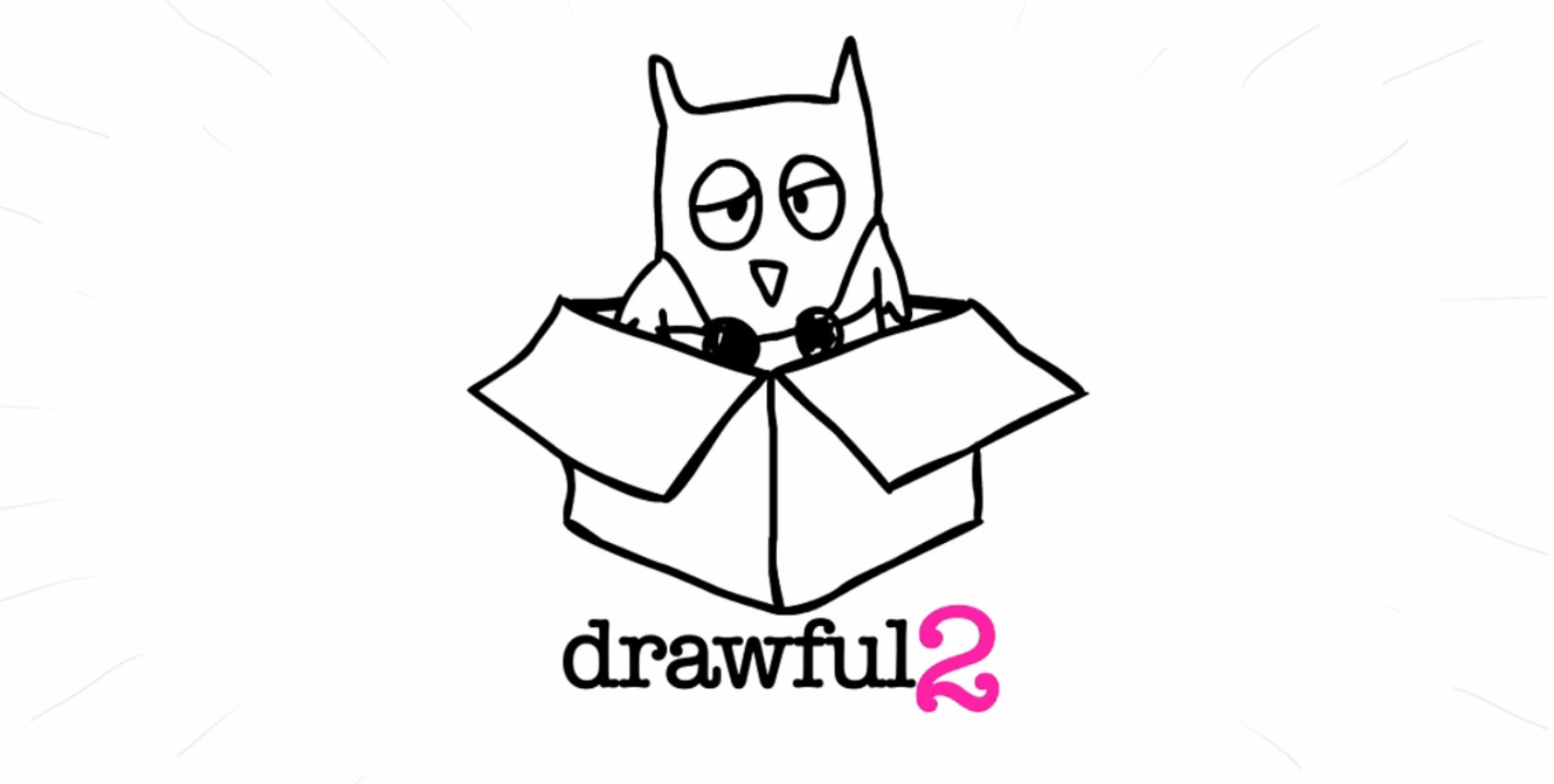 Jackbox Games sure has this whole party game thing figured out. While I may have some friends who would balk at a night of video games (heathens) or suffer flashbacks of Chinese checkers with Grandma when invited over for board games, Jackbox’s recent line of offbeat trivia/comedy games have managed to find the perfect compromise between the two. That players only need a cell phone or tablet to participate makes it that much easier for hosts to organize — no crazy daisy-chained USB hubs with controllers writhing out of them like a belligerent squid or any of that nonsense.

Drawful, which made its debut in the original Jackbox Party Pack, has been a favorite in my circle of friends for the past two years, frequently making an appearance during get-togethers alongside other party games. While the sequel has broken out of the pack experience, it more than proves itself as a standalone title with enough laughs and goofs to justify itself and then some. 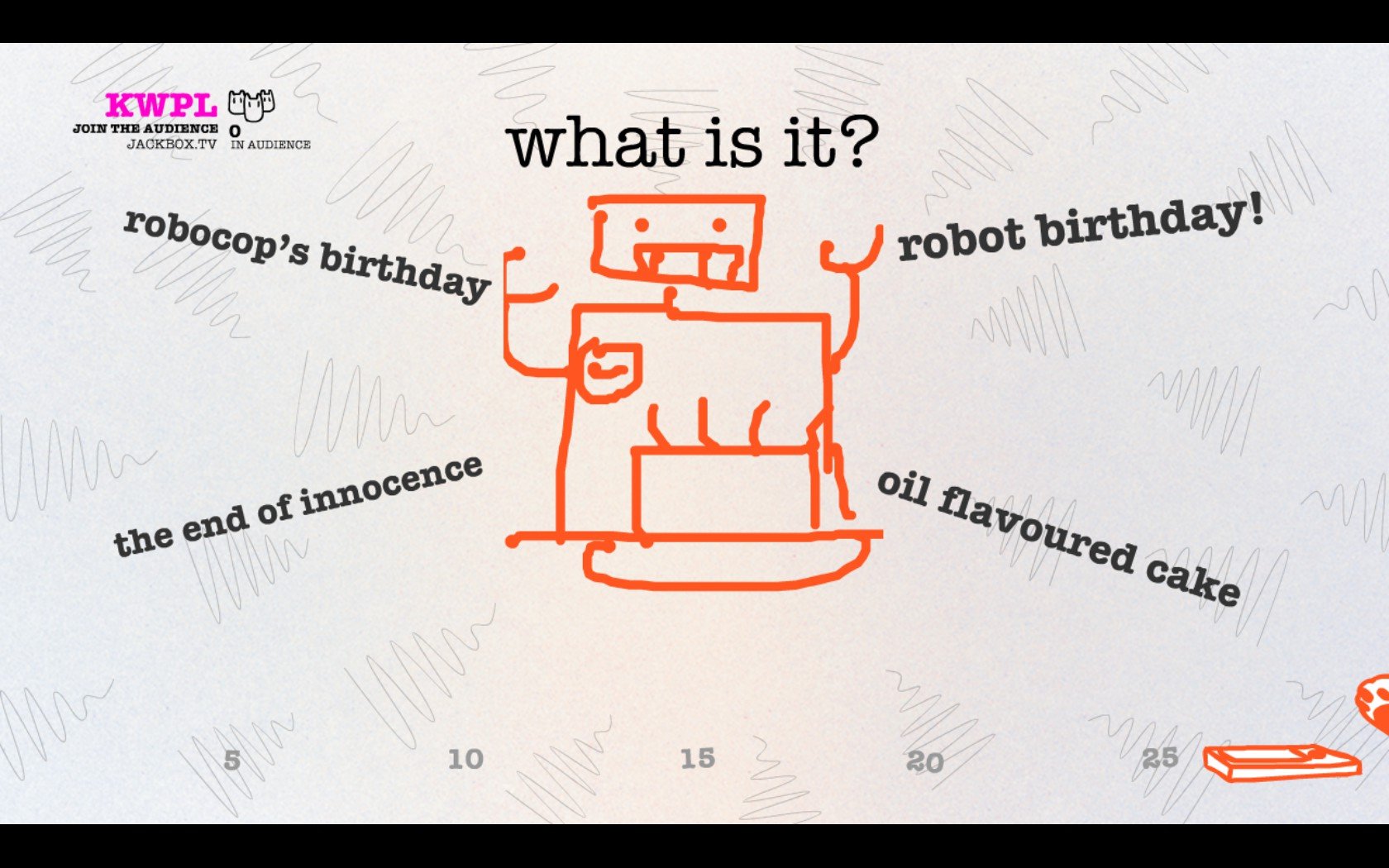 Drawful 2 follows largely in the footsteps of the original. When you boil everything down, it’s basically a drunken, ribald game of Pictionary. Each player is given a prompt to draw, which can be anything from the extremely literal “arrows pointing at food going into a mouth” to something a little more esoteric like “RoboCop’s birthday.” You get 60 seconds to create your masterpiece using your finger tip and whatever is lurking in your imagination. New for the sequel is also the ability to use a second (randomly assigned) color if you want to get fancy.

There are no erasers in Drawful 2, no take-backs or do-overs, and that’s part of the charm. The idea isn’t to make some jaw-dropping display of pixel art, it’s to make an ass of yourself in front of your friends while they do the same. It’s about working inside the bare-bone limitations you have to communicate an absurd idea under a strict time constraint. Really, you’re probably learning a lot about signs and signifiers and the economy of communication while working through a round of Drawful (although you’ll probably be laughing too hard to appreciate it).

Once your objet d’art is revealed, the other players get to take a guess at exactly what you were trying to draw. The artist gains points when people pick the correct answer and so do they. However, the other players can also earn points by crafting devious lies that fool the rest of the dimwits holding phones. This can lead to some interesting reinterpretations of the drawing, or half a dozen slightly differently parsed variations on the same idea if the picture was a little too clear. Either way, good times are had.

Of course, there are always going to be those people who prioritize getting a laugh more than scoring points. Those people who value the amusement of their peers over winning. Who base their self-esteem on their ability to bring a room to a halt with choking laughter and live for the moment a joke hits (I might be projecting a bit). 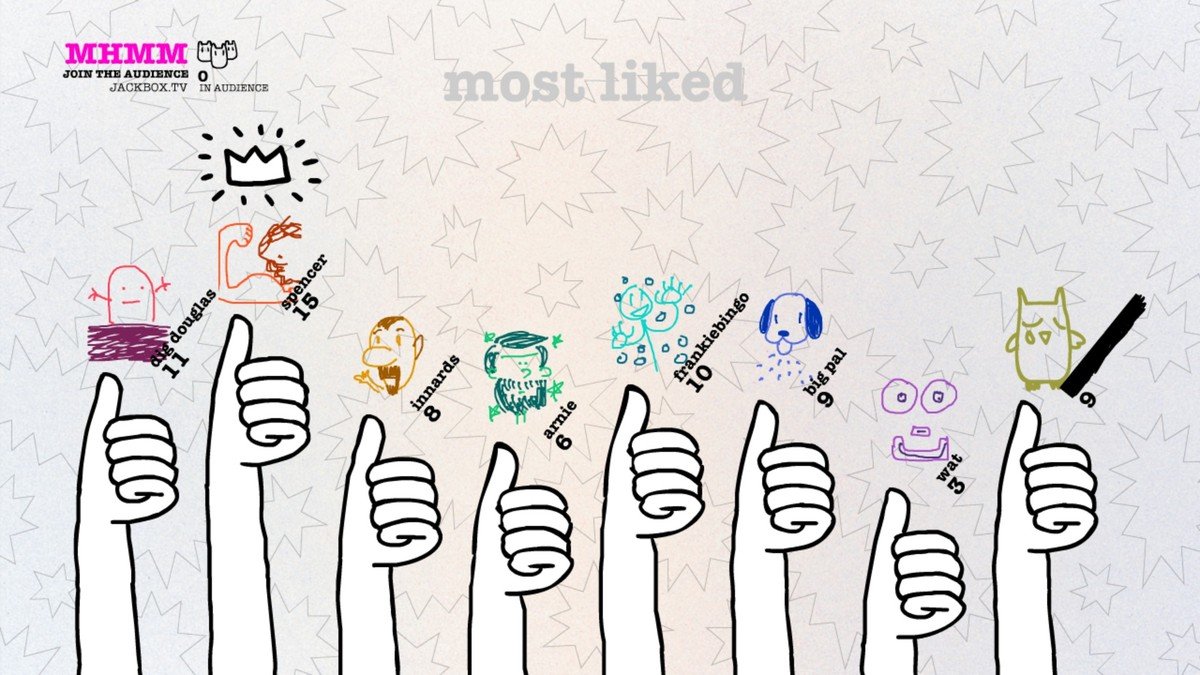 Thankfully, Drawful 2 has these sad cases covered. After selecting an answer, the option to vote on your favorite but not necessarily correct answer of the group appears. Doing so tosses them a self-esteem boosting thumbs-up. At the end of the game both the winner with the most points and the clown with the most thumbs-up are honored. In my circle this is referred to as scoring a “moral victory.”

The major new feature of Drawful 2 directly caters to that impulse to make your own goofs and riff on what tickles your friends. Players now have the ability to make their own game, a custom episode featuring their very own prompts. Cleverly, this can either be done by the host setting up an episode in advance (episodes are saved and can be retrieved or edited later), or collaboratively with the entire group adding in their two-cents. There are options to display the game as it’s being built, or to keep the prompts secret for maximum shock value and monocle-dropping later.

The ability to make your own game might not sound like much, but with the right group of friends, it can be an absolute riot. A perfect machine to deliver inside-jokes and laser-guided goofs designed to demolish your gang with a fit of giggles. It’s a simple addition, but one that is so obvious, so entertaining that once you try it, you’ll wonder how the original ever got along without it. 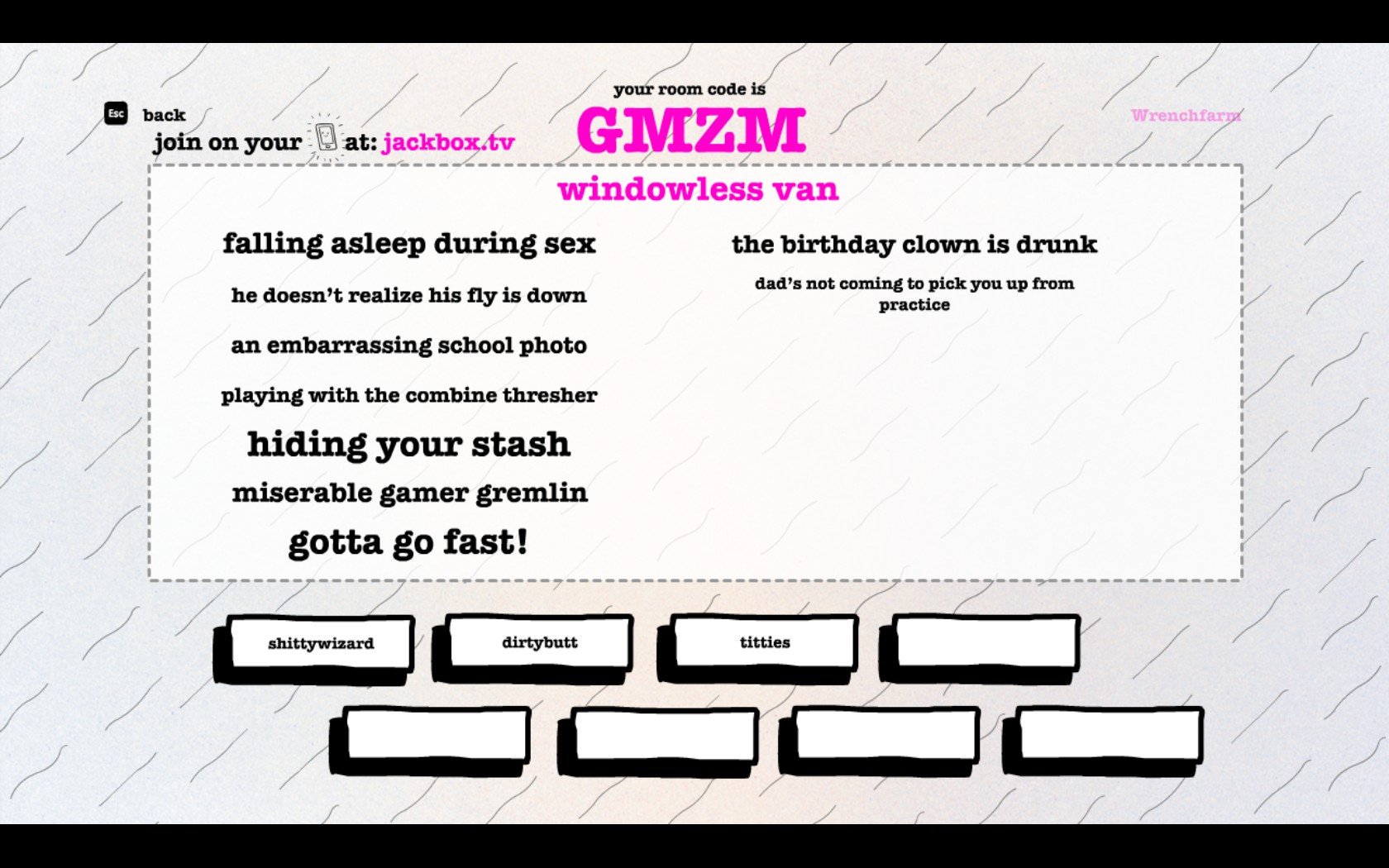 While Drawful 2 is best experienced in a living room with three to eight friends sharing laughs and maybe a few drinks, the experience translates to online multiplayer surprisingly well. Like the other recent Jackbox games, Drawful 2 comes with baked-in support for Twitch streamers and audience participation.

While the game only supports up to eight actual players, an audience of up to 10,000 can weight in on the answers they like. Embracing the remote-play streaming audience, Jackbox Games has spent more time crafting options to make the streaming experience as pleasant as possible. There are options to force players to be logged into Twitch (so mute randos aren’t cluttering up the match), and the ability for the host to censor offensive images or answers to cut down on trolling. There is also an option to censor out the most provocative of the game’s default prompts if you want to bring it around to the family for the holidays without giving your dear old sweet grandmother a heart attack.

Then are also a number of small, subtle improvements over the original. Quality-of-life features like being able to log back into a game if you accidentally close your browser or hit the back button (a snafu that would derail the original with an absentee player for the rest of the game); streak bonuses for multiple correct answers in a row; and a glib narrator who has more built-in responses and jokes for various prompts and answers than the original. It feels like a far more polished, rounded version of the original. That said, it still feels A LOT like the original. 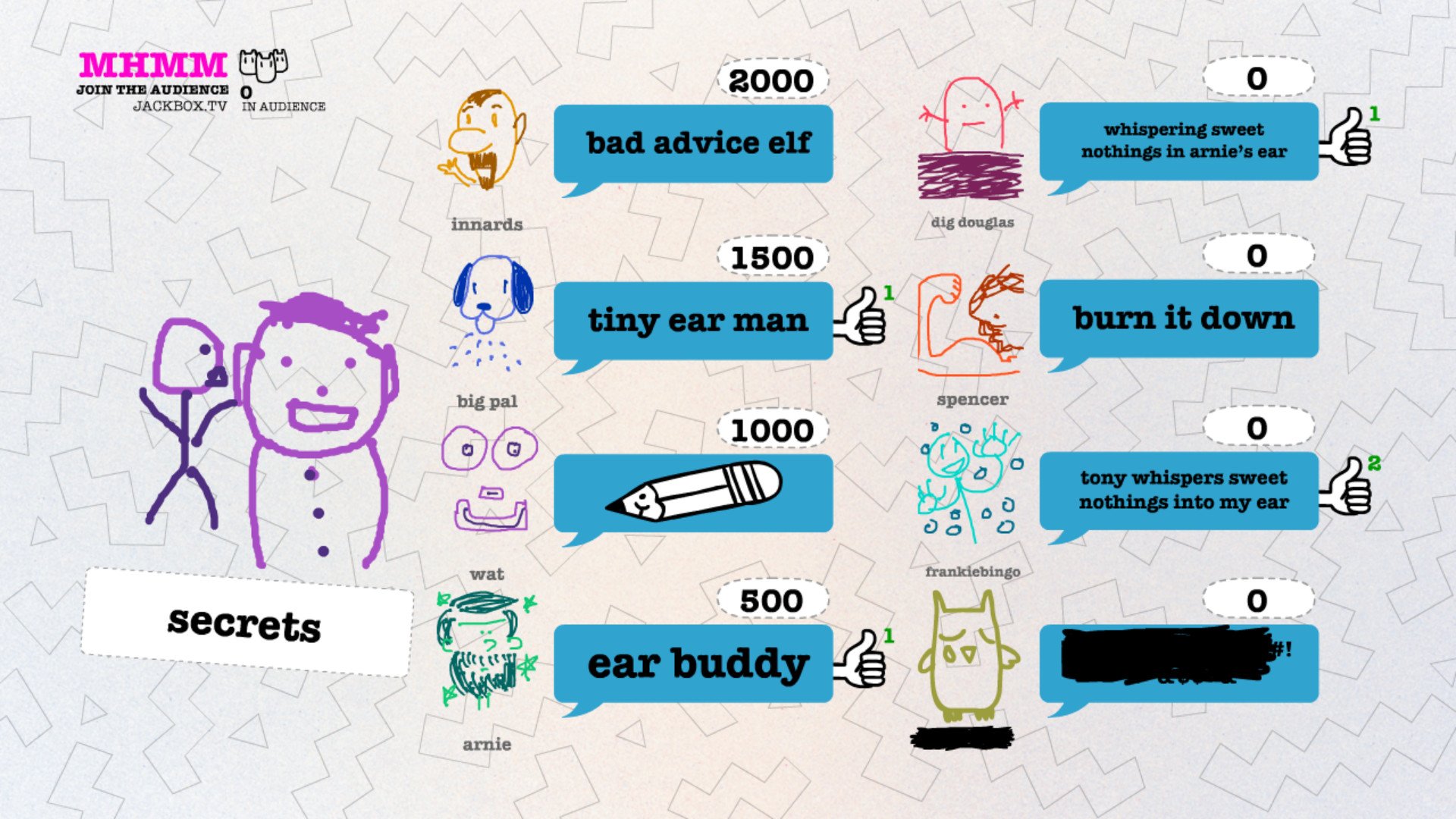 Drawful 2 is a great package, but there is no escaping the fact that it is very much just more Drawful. While the addition of a second color choice is nice, the ability to make your own prompts a Godsend, and the extra Twitch and content options very welcome, Drawful 2 still feels more like an expansion pack than a full-fledged sequel. A successful iteration on an idea, not an innovative leap forward.

For me, that’s plenty. Drawful 2 is a phenomenal vehicle to waste away an entire evening with your friends doubled over in fits of laughter. It’s hard to care about the lack of real innovation when tears are blurring your vision and you can’t catch your breath from laughing so hard.