If you decide to purchase again, turn to page 32

Ever since the birth of pop culture, fantasy worlds have always been a go-to for adventure. Whether the works of Tolkien, Sword and Sorcery movies, the Fighting Fantasy game-books, or good old-fashioned D&D, it seems every generation has an audience eager for tales of evil wizards, enchanted pixies, stout dwarven fighters and beautiful warrior maidens.

Dragon’s Crown, which launched for PS3 and PS Vita back in 2013, was a love letter to all of the above, while simultaneously being a celebration of classic gaming itself. Dragon’s Crown blends veteran elements of fantasy RPGs with retro arcade action, all daubed in nostalgic artwork instantly recalling metal albums and tabletop gaming manuals of yore.

For a new generation of players, Atlus and Vanillaware have polished up the somewhat divisive title for release on the PS4. The game has received a visual and aural upgrade to excite veteran fans while also hoping to hook a whole new generation of adventurers. Grab your sword and polish your helmet, as we return to Hydeland once more, in search of the Dragon’s Crown. 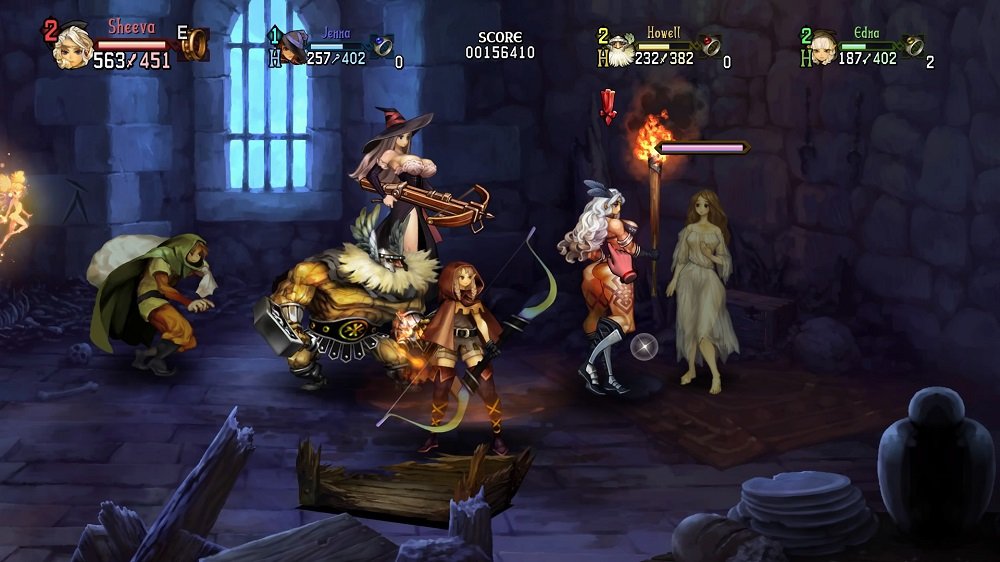 As our own dear Chris Carter reviewed Dragon’s Crown on its original release (a review I, incidentally, didn’t read before writing this one), it almost seems a bit redundant to run over the game itself, given that Pro is mostly bringing aesthetic changes to the table. However, here’s a refresher for those of you who have never looked into this unique title.

Dragon’s Crown is an action-oriented RPG, which plays in the style of scrolling fighting games of the ’90s, particularly reminiscent of Sega Saturn classic Guardian Heroes. Up to four players select from six classic fantasy archetypes and then lay waste to wave upon wave of ghastly creatures, progressing through stages, dodging traps, bagging loot and taking on unique boss characters. At its core, Dragon’s Crown is, indisputably, a brawler.

But it’s so much deeper than that. A heavy emphasis is placed on leveling stats and acquiring gear, with players able to revisit locations to discover new routes, bosses and side-quests. Each character brings his or her own own unique elements to do battle with the armies of living fungi, owlbears, harpies, giant spiders and other grim creatures that are conjured up to do your party harm.

Stringing all of this together is a paper-thin – and I mean paper-thin – plot involving some sad princess and a dragon. This story is simplistic, trite and cheesy, which caused complaint for some on release. However, it’s entirely in keeping with the game’s efforts to recreate the writing style of classic ’80s game-books. Anyone who’s ever spent time “turning to page 14” and then dying (before resurrecting themselves with the power of a bookmark), will be immediately at home with the game’s earnest, almost juvenile narration.

The action itself, especially with a party of four, becomes instantly chaotic. However, you can limit the number of pals joining you on the battlefield, which makes for a tighter, more focused experience. Weapons are littered throughout, wild creatures are free to ride, Golden Axe-style, and fighting fans will immediately recognise mechanics such as juggles, parries, double-jumps and OTG combos.

There is no denying that for some players the chaotic brawling, stash-arranging and consistent back-tracking action will be seen as repetitive. For some there was no getting over that gripe in 2013, and Dragon’s Crown Pro will do nothing to change that opinion today. But with all the level progression on offer, an abundance of secrets, not to mention encouragement of multiple playthroughs and six unique characters to master, there’s definitely way more to Dragon’s Crown Pro than mindless button-mashing. 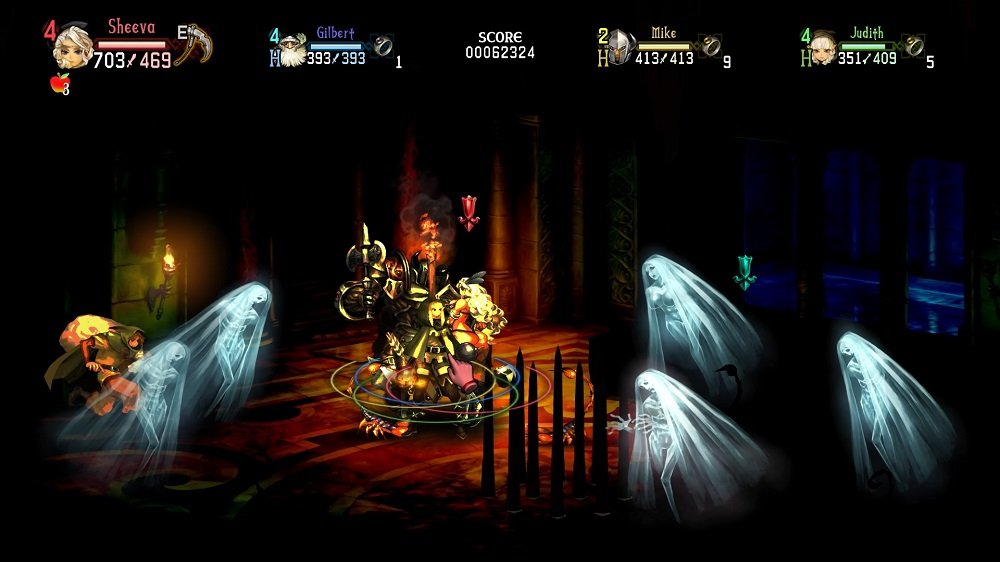 This new edition of the game features beautiful 4K visuals for PS4 Pro owners, with an instantly noticeable upgrade from the already fine-looking original release. Every stroke of the game’s gorgeous backgrounds, wonderful cast, and detailed animations is rendered in the crispest detail. This visual boost also does wonders for the atmospheric lighting and screen-zapping magic effects.

Art is, of course, subjective, and Dragon’s Crown’s traditional-cum-outrageous designs – by creator George Kamitani and various guest artists – will forever be a deal-breaker for many players. For whatever it’s worth, I think the game, its heroes, villains, stages and huge gallery of unlockable art looks fucking awesome. Don’t @ me, pal.

The majestic score has been re-recorded with a full orchestra, bringing a new richness and depth to the Dragon’s Crown soundtrack. Each tune sets the scene perfectly, from slow, Middle-earth dirges with a haunting vocalist, to big brass sounds proclaiming your latest victory. Old-school fans, who can’t leave the classics behind, will be pleased to know you can switch back to the original score if you desire.

Said old-schoolers will also be happy to hear that their old saves are compatible with Dragon’s Crown Pro. Not only that, but cross-play will be implemented between the new release and last gen’s PS3 and PS Vita versions, so you can all go HAM together on that gross-ass giant eye monster, whatever your platform of choice. 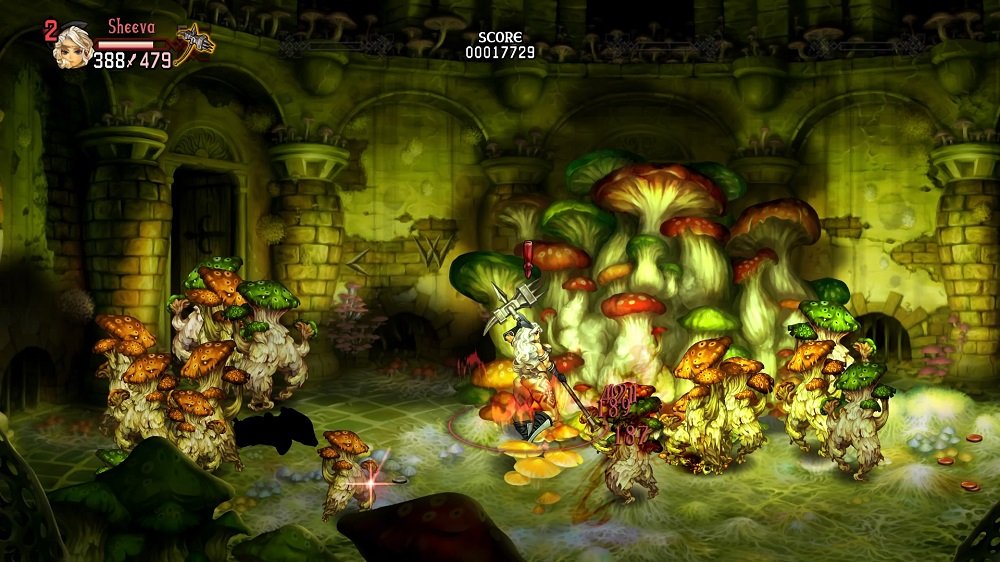 So, what if still own your PS3 copy of Dragon’s Crown, should you pick up Pro? Essentially what you have here is the definitive edition of the game, looking and sounding better than ever. It doesn’t do a whole lot more than the version you already own, but if you love Dragon’s Crown – and you can afford to – then you should consider the double-dip, either now or somewhere down-the-line.

Dragon’s Crown remains not for everyone. Some might consider it repetitive, vulgar and may even be left wondering what all the fuss was about. But, for those of you who ever fell in love with arcade brawlers, fantasy storytelling, and tabletop RPGs, then Dragon’s Crown Pro will shine oh-so-brightly as the unique and sublime treasure it is. Your legend awaits, hero. Seize the day.