On paper, the thought of participating in an eight-player Dragon Ball Z battle sounds like the stuff of fanboy dreams. Blasting Kamehamehas across the chasms of Namek while fighting alongside your favorite Saiyans could be as exhilarating virtually as it was to watch years ago on TV.

Dragon Ball Z: Battle of Z attempts to recreate this in all its chaotic glory. More than a simple one-versus-one fighter, the game is jam packed with characters — from practically the entirety of the franchise — that can be pitted in teams of four against each other in any dream combination possible.

Unfortunately in reality, having four Krillins trying to dismantle the likes of Androids 16 through 19 together is not even half as entertaining as the thought is ridiculous. 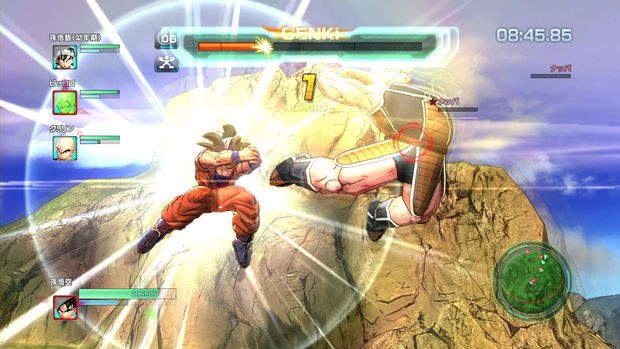 Since the Budokai series on the PlayStation 2, Dragon Ball Z fans have been trudging through the same tired story on a seemingly annual basis. Battle of Z, as both a positive and negative, embraces that many fans have been there and done that. While it’s refreshing to not be bogged down with the same reprized scenes that made the series what it is today, the utter lack of any true presentations makes the whole experience feel rather lackluster.

Instead the focus is on four-versus-four team battles. The single-player portion takes players across the same locals that any seasoned DBZ fan has visited numerous times, but now with the expansiveness that cramming eight fighters into an area can afford. Bigger areas to zip through and teleport around, combined with destructible environments like rocks and trees, while enjoyable at first only add later to the tedium of trying to finish off a fleeing opponent. 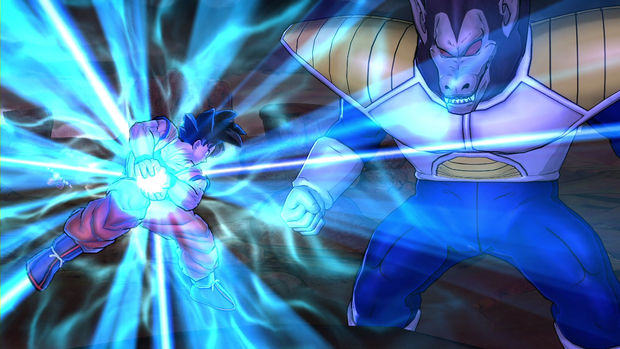 There are 60 missions to fight through culminating in the Kid Buu Saga, but for the most part even when things mix up slightly — like taking on a single Great Ape Vegeta — they feel the same since combat typically falls upon the same rinse and repeat tactics. Additionally, in incorporating teams of four into each battle, much of the anime’s canon is thrown out the window, especially when you decide that four Gokus are better than any team with Yamcha on it.

Online play is where Battle of Z is hoping to capture the biggest draw for its players. Sadly, a month out of release and the community is all but barren. In fact, I have only found one online match to date and was promptly kicked. The game allows for both cooperative battle — that I can only assume makes the mission mode more enjoyable — and team battle modes.

Team battle ranges from standard four-versus-four affairs to eight-player free-for-alls, and even has a capture the Dragon Balls mode, but alas since I have no friends playing online and with the complete omission of any local play, I can only imagine that these modes offer more strategy and excitement than the rather mundane single-player offering.

Perhaps single-player missions would be more engaging if Battle of Z felt like more than just a multiplayer serving of the series’ past titles. Combat is regulated to simple button presses to execute each of the character’s special and normal moves. Combos rely on basic, repetitive button tapping and don’t require much skill to execute.

It’s the same formula for fighting the series is known for, and even amid the larger scale of events nothing ever amounts to anything more than isolated one-on-one encounters. It may be four-on-four, but aside from the occasional team up or chase attack, things boil down to the standards that made Dragon Ball Z games what they are today.

The only things that truly augment combat are the trading cards and the ability to issue basic support commands to teammates. Trading cards are earned after missions and allow each character to be modified and customized to a player’s liking. Stats like strength, speed, and Ki can be increased to make characters near godlike with the right selection. I can only imagine this leading to everyone using the same builds online, but as I stated earlier online (at least on Xbox 360) is near extinct. 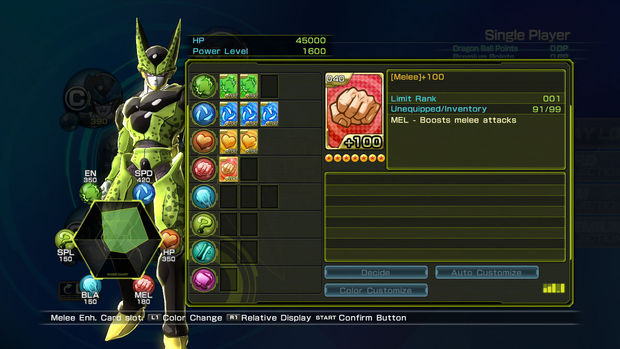 As for issuing commands, they are regulated to different directions on the D-pad. Players can ask their team to focus on fighting, defense, team attacks, or going all out. For the most part the AI reacts properly, but aside from when I asked my squad to go on defense, I never really felt they acted too different. Then again when are fights in Dragon Ball Z presented as anything less than all out?

Dragon Ball Z: Battle of Z could have been something special with its eight-player battles. Prior games have been all style and no substance and unfortunately the latest is more of the same, possibly even less thanks to its bare-bones presentation. If you’re a huge fan of the iconic anime looking for even more fighting action — and you have friends who are willing to fork out the cash to join you online — there is some enjoyment to be had. For everyone else, aside from the increased multiplayer, you’ve already played this before.