“Legacy” comes from humble beginnings: Varric, our dwarven narrator, tells Cassandra, a Chantry seeker, that he didn’t tell her about Hawke’s excursion into the Vimmark because he “didn’t think it was important.”

An inauspicious start for the first piece of downloadable content available for Dragon Age II, BioWare’s biggest release this year.

But Varric’s explanation points to something vital about the Dragon Age series as a whole. Dragon Age II offers a surprisingly focused look at Hawke’s rise to fame in Kirkwall. The “Legacy” DLC doesn’t further that aim, doesn’t fit into the strict confines of Hawke’s character development.

But Dragon Age has always been, often explicitly, about world-building, and this is one area in which “Legacy” shines: it introduces a new area — no seriously, it’s brand new, and none of its assets are recycled — around Kirkwall while adding texture and detail to Thedas’ ancient history, to the Grey Wardens, and to House Hawke.

That “Legacy” resides largely outside the confines of the story of Dragon Age II mostly works in its favor. Varric very consciously gives Cassandra the Cliff Notes version of Hawke’s life, and the “Legacy” team was very economical, using the gaps in Hawke’s life to expand on the ancient Tevinter imperium and its relationship with both the Chantry and the darkspawn. Since it doesn’t explicitly tie into the core narrative, “Legacy” can be played at any point during Dragon Age II, a nifty benefit of writer David Gaider’s oft-touted frame narrative. It’s all heady stuff for Dragon Age devotees — the presumed target of post-release DLC — and your enjoyment of “Legacy” will depend on how much you’ve already invested in DAII.

Unfortunately, its outsider status is only exacerbated by the way “Legacy” is clumsily implemented into the game world. Instead of adding the Vimmark Chasm to Dragon Age II’s map — or, better yet, letting us play through the Carta assassination attempt that sparks the quest line — “Legacy” is unceremoniously triggered by clicking on a garish statue smuggled into Hawke’s manse. 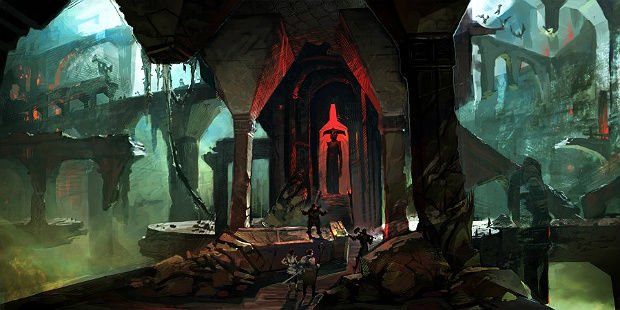 While a Carta assassination sounds exactly like the high-stakes power struggle that runs through Dragon Age II, “Legacy” very quickly strays from that template. The quick and dirty synopsis is that there is a conspiracy to harvest enough Hawke-family blood to perform a cult ritual. This passable fare for the fantasy genre, but it strips away the most important lessons from DAII: that Kirkwall and its denizens react to Hawke because of the choices she makes, not her genetics; that Hawke is defined by what she does, and not who she is. It’s a semantic quibble, perhaps, but the dramatic tonal shift only reinforces the overall impression that “Legacy” doesn’t fit into Dragon Age II quite so seamlessly.

But if “Legacy” stands out like a sore thumb, it at least brings its own architecture with it — there’s a solid dramatic structure in place, with a beginning, middle, and end not often seen inside individual quest lines. The quests in vanilla Dragon Age II have a way of melting into each other, nested inside a larger story, that prevents any particular one of them from feeling conclusive — it works because most of them contribute to our understanding of Kirkwall as a whole. But “Legacy” is cohesive (for the most part) and feels complete, concrete, and more individually satisfying that most of DAII’s quests.

But a strong narrative arc doesn’t necessarily keep “Legacy” from feeling muddled and unfocused. Each of the dungeon’s sidequests are rich with narrative potential — Hawke finds a ghostly mage, an altar to one of Tevinter’s old gods, and a missing dwarven Paragon — but none of them further our understanding of Hawke or her world. The tiny mini-narratives never develop, nor to do they lead to interesting combat opportunities — they might as well be glorified treasure chests. This kind of window-dressing is easier to hide in an expansive, 60-hour saga, but it leaves “Legacy”’s middle section feeling rather flat. 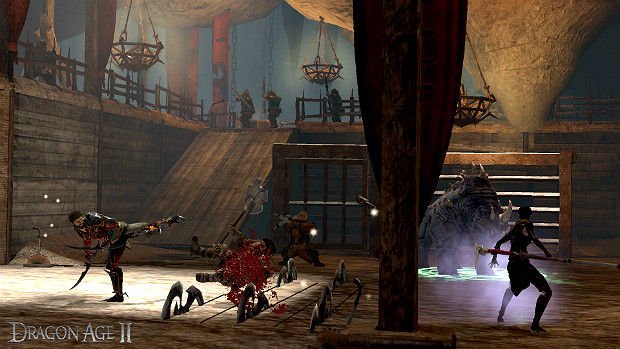 Exploring the Vimmark and its caverns, Hawke very quickly reaches a point of no return — cut off from Kirkwall and from the rest of the party, “Legacy” feels remote and unconnected from the main story. There is one chance (and only one) to pick party members, and there are no shops to peruse. The character interactions were perhaps the strongest part of Dragon Age II, and keeping them locked away to serve some convoluted blood magic plot point is a shame. In contrast, the plot does allow for the introduction of new darkspawn, “Legacy”’s brightest spark.

The new variety of darkspawn are fantastic additions and do a lot to change the tenor of combat in Dragon Age II, and most of the mobs are complex enough to allow players to flex their tactical muscle. The alpha-type darkspawn are resilient and versatile, and complemented by a wide variety of well-placed grunts — archers take the high ground, and beefy grenlocks block choke points. When “Legacy” is feeling particularly carefree, dragonspawn and corrupted spiders will fight among themselves before turning on Hawke. As a result, threat generation, stamina management, and buffs have never been more crucial, even during a standard encounter. The quest’s penultimate set-piece is also particularly well-paced.

And if there’s one positive thing to be said about the way “Legacy” limits players to the same three companions the whole time, it’s that restriction often demands resourcefulness. “Fight smarter, not harder,” the designers seem to say, and I appreciate being given the benefit of the doubt, though that sentiment doesn’t extend to the final boss fight. 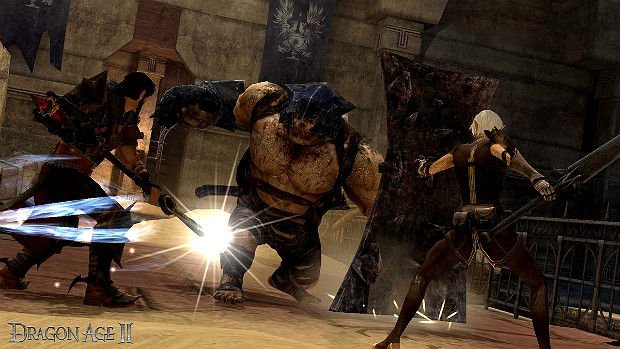 Among BioWare’s more cynical fans, there is a deep-seated suspicion that lead designer Mike Laidlaw has forsaken his roots in favor of the action game, an allegation borne out in some ways by “Legacy.” The action and RPG genres have always been uneasy bedfellows, and that tension comes to a head in the last fight, turning a suitably dramatic climax into an exercise in frustration. The frequent glitches in this final section don’t help.

In addition to the standard spells and buffs, Corypheus — a souped-up proto-darkspawn, in the vein of Awakening’s Architect — has environmental tactics that reward keen timing and pattern memorization more than they do strategy or team composition. This twitchy sensibility — Dodge the moving wall of fire! Dodge the icicles! Maneuver this impromptu maze! — was often detrimental to my fragile and slower companions who tail Hawke like ducklings and, as a result, were often caught in Corypheus’ traps.

These deaths feel arbitrary and unfair, a place where the game’s mechanics failed to complement one another. Coupled with players’ inability to consult a shop or draft better-suited party members from the reserves, this encounter highlights the extent to which BioWare have incorporated action gaming tropes into this piece of DLC — the last ten minutes feel disinctly different than the rest of Dragon Age II. 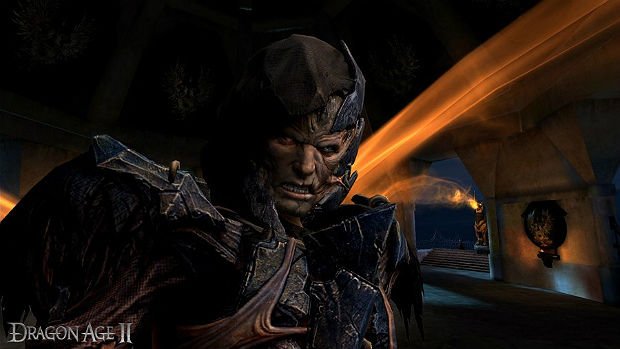 This fuzzy, uneven game ends with a bit of reflection: Hawke, gazing into her hearth, contemplates her relationship with her mother and sister, but never spares a thought to poor, butchered Corypheus. And why should she? — he’s just a darkspawn. But you realize that Coprypheus was never the point: he was always just a plot device to justify exploring Hawke and her heritage.

On the one hand, I appreciate that BioWare are trying — if not always successfully — to offer something not quite so unabashedly conflict-driven; but on the other, this realization undermines the crux of the game. There comes a scene in every piece of BioWare content during which the game’s protagonist must choose between two equally dubious options. In a perfect world, these decisions would represent the apex of Hawke’s civic and moral engagement; in “Legacy,” it’s abrupt, perfunctory, and poorly implemented, and the results aren’t significantly different for each choice.

“Legacy” has two undeniable strengths, each with a corresponding weakness: it houses some of the most technical combat to be found in Dragon Age II, but the final battle is a glitchy slog; its limited scope allows players to focus on one aspect of Hawke’s character, but its narrative is muddled and bafflingly tight-fisted with the funny, evocative moments that made the core game a treat.

Ultimately, “Legacy” sticks out because it asks a relatively humane question: Is it so much for Hawke to ask that she and her family not be assaulted by a gang of blood-frenzied dwarves?

A humble game for a humble premise. I guess Varric was right.