Let it be said that I am not one to pass up a good dolphin game. Or even a mediocre dolphin game. Seriously, just give me some dolphins and I’m happy!

At first glance, Dolphin Up may seem like a mobile title, and that’s probably because it actually started out on those devices. It’s a sequel to Dolphin Olympics, and has been available on mobile markets for a couple years now.

Now it’s finally coming to consoles years later with a Wii U release. 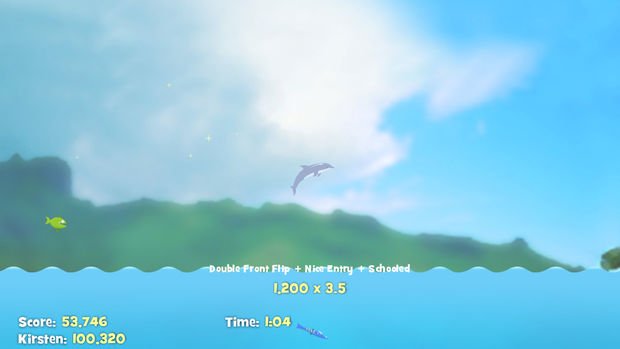 Dolphin Up is a very simplistic game in which you perform tricks and combos with your dolphin to earn as many points as you can within two minutes. If you can land cleanly back in the water after a jump, you’ll earn a “Nice Entry,” which grants you a speed boost and can keep your combo going into your next jump. Keep chaining them, and soon your dolphin will be shooting all the way up into space, defying the laws of gravity and physics, as your score reaches astronomical levels.

That’s really all there is to the game. You can choose between three dolphins (bottlenose dolphin, orca, or Pacific white-sided dolphin) and three habitats (Dolphin Reef, Glacier Lake, or Jungle Valley). There’s really no difference between the dolphins aside from aesthetics, and the differences between levels are minimal. Each level contains one special addition which will grant you points if you interact with it: rings to swim through in the reef, glaciers to slide off of in the lake, and birds to startle in the valley.

These usually don’t affect gameplay, although the rings give you a nice speed boost if you manage to find one. There’s also a Free Swim mode, if you just want to play freely without worrying about time limits, but it doesn’t keep track of your score.

The tricks can be boiled down to four basic things: flips, rolls, tailslides, and background bonuses such as swimming near fish or reaching the moon. There are various types of flips and rolls that can be performed, and other neat bonus tricks to discover as you’re jumping around. It would have been nice if they’d added a menu detailing all of the tricks you could do, maybe unlocking each entry as they’re performed in-game. I managed to make it all the way up to Jupiter, which felt like a crazy accomplishment at the time, but I hear there’s a special Hitchhiker’s Guide to the Galaxy reference hidden somewhere for exceptionally skilled players to find.

While Dolphin Up is a cute, addictive little experience, I feel it could have been vastly improved with a few simple additions. For one, the lack of music becomes very noticeable after awhile, so a soundtrack would have been nice (preferably something calming and not very catchy, since you’d probably be hearing it a lot). I also would have liked some way to increase your time. Swimming through rings apparently adds a second to the clock, but the rings are so sparse that the few seconds you may gain don’t really add up to much (plus, two of the levels don’t even have rings).

If there were a more reliable way to add time to the clock, it could really help increase the competitiveness of the leaderboards. Achievements would have also been helpful to give you a greater sense of accomplishment. The mobile versions boast achievements, but they were oddly removed for the Wii U version. 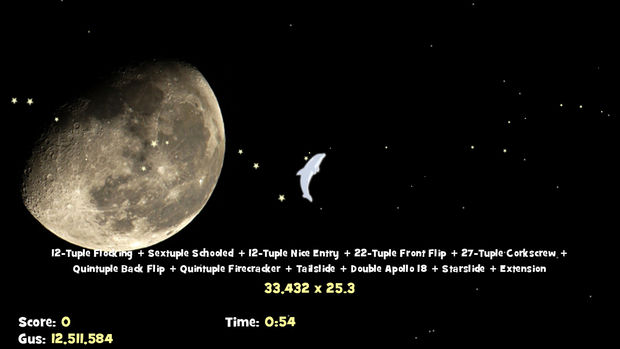 For the relatively low price of four bucks, Dolphin Up is a fair purchase, but I feel it’s better suited for mobile devices where it already exists at a slightly lower price. This is exactly the kind of game I could see myself enjoying far more on bus rides rather than on the couch in my living room. You do get to play around as a cute dolphin though, so I gotta give it props for that!