Prior to playing DJMAX Technika Tune for this review, I could count the number of times I had listened to K-Pop music on one hand, one of those being PSY’s “Gangnam Style.”

To some, that would make me only slightly more qualified to review this Korean-born rhythm game than say, a chimpanzee, or a person without hands, or even someone who is vision- or hearing-impaired.

Whether or not that’s true, however, I did have quite a lot of fun playing a great rhythm game, and perhaps the first title yet to make the PS Vita’s primary gimmicks fun to use. 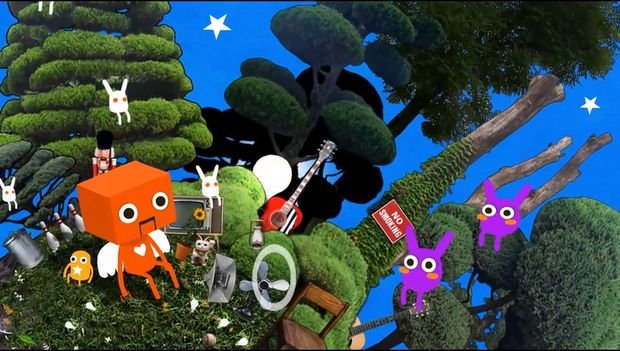 As implied by the title, DJMAX Technika Tune is an extension of the DJMAX Technika line, an arcade series known for using a massive 22-inch touch screen as its main interface. That makes the Vita a natural (if smaller) fit for the series, and Pentavision has fully committed to making their touch-based game work with the Vita’s own touch wizardry.

In fact, the game is almost exclusively touch-based. Besides pushing the Start button to skip the opening movie, nearly every game action from tapping notes to navigating menus is done on the touch screen. Smudge-averse players should keep a cloth handy to clean up every so often. 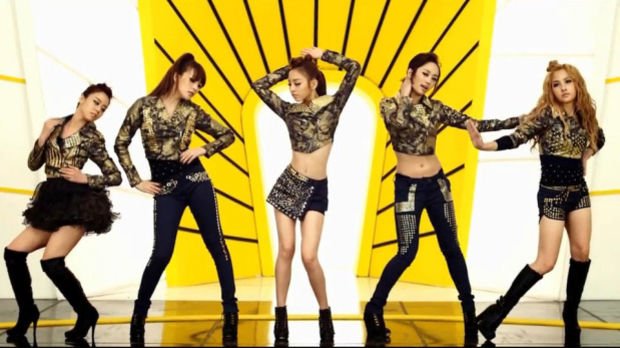 The mechanics are as might be expected for a rhythm game (the relative novelty of a touch screen aside). Players will tap notes as a sync bar passes over them. The closer to the bar they hit, the better the score. The screen is split into two horizontal halves, and the sync bar crosses them in turn, first left-to-right on the top half, then in the opposite direction on the bottom half.

The notes themselves are either to be tapped on cue or dragged along a specific path. Successful hits feed into a “Fever” gauge. When full, the Fever power can be triggered to grant maximum score to every note hit so long as it’s not missed completely. 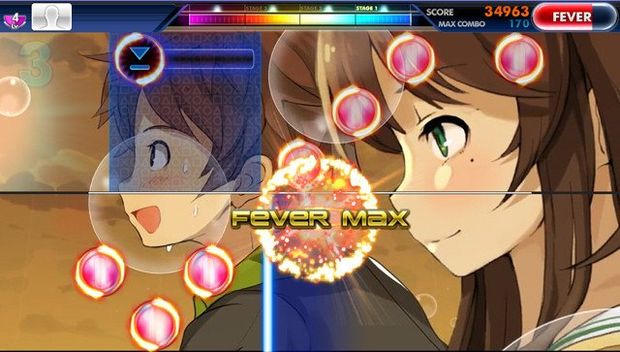 The rear touchpad is used to bring yet more note types into play, tapping or holding. The touchpad notes are thankfully simpler, requiring only proper timing rather than precision aim as with the front-screen notes, but having them in play ups the level of concentration and coordination required considerably.

The touchpad antics can actually be turned off via the menu (simply turning the rear notes to normal front-screen ones), but once past the initial learning curve, the additional challenge is thoroughly enjoyable, especially as tougher songs tend to cluster mixed note types from both inputs, making for a level of physical involvement just short of a dancing- or plastic-instrument-based rhythm game.

Just don’t try to play it in a moving vehicle, or while standing up. The kind of grip needed to keep one hand free to tap the front screen while maintaining a finger on the other hand to tap the touchpad makes the Vita vulnerable to being dropped to the floor or even grabbed by an opportunistic thief. 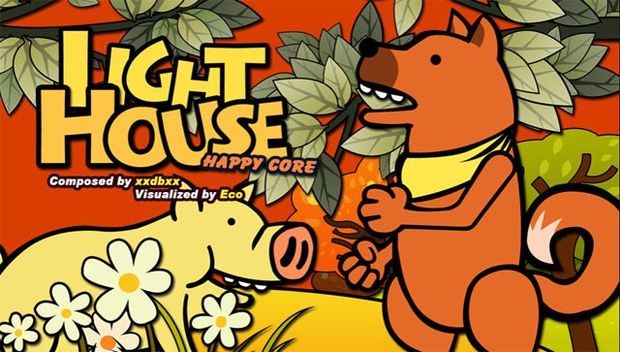 DJMAX Technika Tune boasts four game modes derived from the arcade original, though the “Star Mixing” and “Pop Mixing” modes are really just the “Easy” and “Medium” difficulty settings, respectively (Star Mixing nixes rear touchpad notes entirely). In those two, players will go through three songs of their selection (the available songs change each time), and their the final score grade is averaged from the scores of the individual performances. “Club Mixing” mode has players pre-selecting a disc set (some of them with names like “Popping-Like” and “LOVE-A-ROUND”), then picking three songs from that set to make their run. A fourth “Boss” song is selected automatically based on performance in the first three songs. “Free Style” is a simple free-play mode, allowing any song to be played without restrictions.

Besides the DJ Icons and note skins, players will gradually unlock pictures, art, and bonus movies for the game’s Collection mode. They’ll also be able to view the videos and listen to any of the songs without gameplay in Album mode. 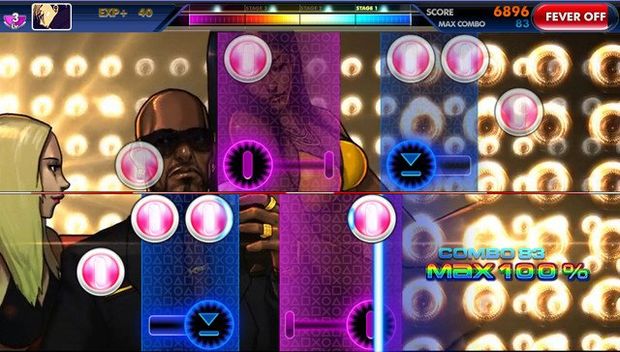 All these words and not a one about the game’s actual music selection!

It’s fair to say that for many players, DJMAX Technika Tune‘s music will be best described as “foreign.” Consisting largely of Korean artists I’ve never heard of, the track list runs a spectrum of genres and classifications I never knew existed, including “Happy CORE” and “Reggaeton-like.” The majority of pieces run in the techno and dance spectrum of composition, with some notable exceptions in the form of songs from K-Pop idol quintet KARA. For some reason, rapper Aspektz also has a song in the game, “In The Tdot,” which is about the city of Toronto, Ontario. That one’s my personal favorite, though it’s one of the less challenging patterns in the game.

Each song is accompanied by an elaborate visualization that players will be far too busy playing to pay much attention to. Thankfully, they’re viewable in Album mode, and look great on the Vita’s OLED screen. The videos themselves run the spectrum of motifs, from straightforward music videos for most of the KARA songs to CG sequences featuring spacefighter battles to anime-style characters acting out the lyrics to more abstract kaleidoscopic displays. 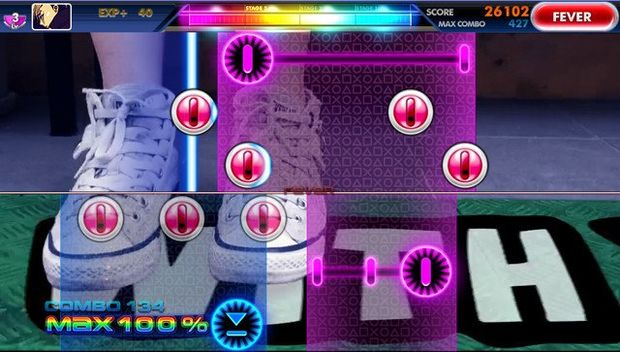 While the the novelty of the touch interface lends the game a physicality absent from pretty much any rhythm game not tied to a peripheral (à la Rock Band), a number of smaller twists also distinguish it from its peers. Tapping a note plays a sound effect that also serves as part of the song, instantly letting players know if their timing is off. In a nice touch, tapping any region of the play area produces a different effect, so one can work off frustration simply by flicking away and producing a stress-relieving cacophony. Optional settings can also be toggled to change the direction of the meter bar, have notes blink in and out, or even not render notes at all for a truly insane test of memory.

The experience isn’t free of hangups, though. The button to trigger Fever mode is inconveniently placed, sequestered in a tiny corner of the screen. During tough songs, it’s almost impossible to hit without risking a broken combo, undermining its usefulness as a score-booster. The notes also seem somewhat small in size. Players with thick fingers or long nails may find their own hands messing with the accuracy of their taps. 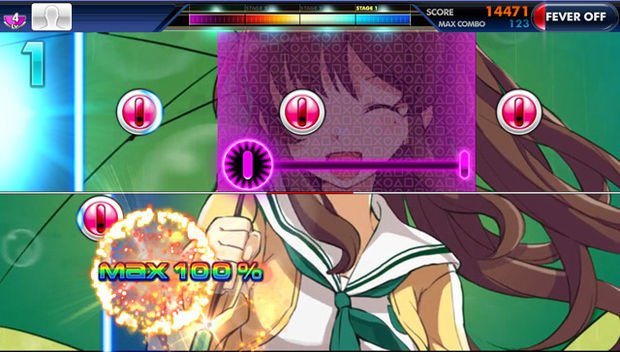 Minor quibbles aside, DJMAX Technika Tune manages to pull off that feat most essential to the success of any good rhythm game, by fostering the competitive, score-obsessed perfectionism that lies at the heart of arcade thrills. It harnesses the same urges that compel one to restart a song at a single missed note or to play over and over again in pursuit of a perfect combo.

DJMAX Technika Tune offers a smooth, enjoyably frustrating experience rooted in precisely-tuned gameplay fundamentals. It’s presented attractively, with a level of engagement that relies on mechanics rather than sentiment and effectively transcends one’s taste in music, which in the case of the arguably exotic track listing would present the highest initial barrier to entry. It may not be especially generous with the extras and fluff, but gets it all right where it counts the most, with the added bonus of making the PS Vita’s touch gimmicks useful and relevant to play.