Always talk to the animals

Remember the first “western RPG” that really made an impression on you? Maybe it was Baldur’s Gate, maybe it was Planescape: Torment, or maybe it was Dragon Age: Origins. Regardless, you love that game. It might have flaws, it might not appeal to everyone, but you freaking love it.

Divinity: Original Sin will be that game for many people. This will be the RPG that sticks with them forever. 20 years down the road they’ll turn to their friend and say “Remember Divinity? Man, they just don’t make RPGs like that anymore!” The game fits in very well with what we consider to be the classics, and if you do have those fond memories, Original Sin is bound to imprint some more. 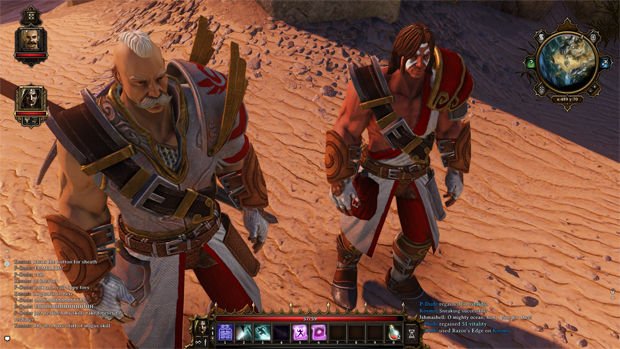 You kick off Divinity by creating two separate characters, which includes their appearance and character classes. These two avatars then become the stars of the plot and require a bit of actual role-playing. It is possible to control the dialogue options of both characters or set the second character to answer things on their own. When the player answers for both, they can control what type of personality each character has by deciding how they respond to certain situations. Depending on dialogue responses, characters will acquire certain traits. For example, if a character decides a civilian should be harshly punished for something, they might receive the Heartless trait.

If the second character is making their own decisions, they may disagree with the player on how to handle a certain situation. If that is the case, an actual rock-paper-scissors match begins between the two. Each victory rewards the winner with a certain amount of points, and the first to 10 points wins the argument. Players can add stat points to increase how many points they get with each victory, making the mini-game easier to win.

When creating characters, players choose from a wealth of character classes that focus on or blend together magic, strength, and stealthy skills and traits. However, just picking a class does not lock a character in to anything. If a player creates a character focused entirely on dealing heavy damage with melee weapons, but then wants to transition into a magic-focused playstyle, they can do so. It’s all a matter of allocating skill and stat points upon leveling up, and there is a ton of customization. Each character really is a blank canvas, and players can eventually hire henchmen to take the place of the two other party members to have essentially four blank canvases in the party.

Of course, other party members will also join the player’s party to add some flavor to both the plot and gameplay. In many old RPGs, it’s the ensemble of characters and their interactions that really captivate players and keep them interested. Unfortunately, Divinity: Original Sin has some rather weak character personalities, which points to the game’s lackluster dialogue writing. These characters don’t stand out as much as the Minsc and Mortes of the past and are rather forgettable in the long run.

Some of the NPC characters and their respective are quite memorable, at least. As players explore the opening town, they are bound to find a handful of colorful characters that do a wonderful job of setting the tone for the entire game. So while players might not remember the characters they controlled, they will likely remember the dog at the cemetery or the clam on the beach!

The plot itself is more on the lighthearted side, which is a theme that persists throughout all the game’s aspects. There are certainly some serious and even dark moments, but they always seem to have an extra twinge of humor or color. It’s a nice and relaxed plot that never tries to do too much, but does build a gradually bigger sense of scale and urgency as the player progresses. Again, some of the weaker writing tends to shine through, but the plot overall is serviceable.

The humor aspect should not be understated. There are some genuinely funny moments written into the game and even more hilarity when playing cooperatively with friends. Hearing your buddy say “oh, uhh, I think I just pissed off every pirate within 100 yards” and then walking over to them only to join a massive pirate slaughter is not something any other game is going to offer. 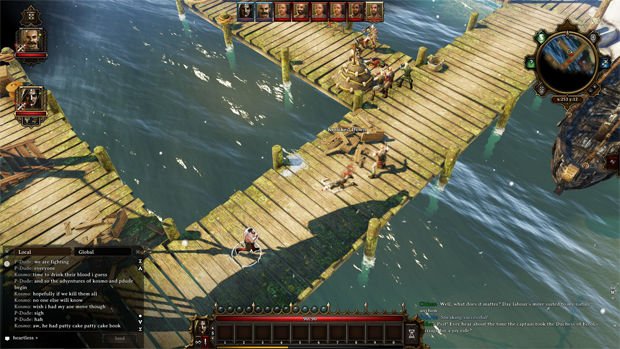 Gameplay takes place in true turn-based fashion. The order of the turns is determined by speed stats and is displayed to the player during battles. From there, it is up to the player to eliminate all enemies in order to progress. The biggest mechanic at play during battles in Original Sin is the use of the environment to deal out damage and status effects. See those enemies standing in a puddle of blood? Zap the blood with some electricity to hopefully stun all of them! Oh crap, that blood actually led a trail right to your warrior and she’s also stunned!

I’ve actually had this exact situation happen to me many times. It is hard to tell the exact borders of certain puddles, and who exactly is actually standing in it. However, this could be due to my colorblindness affecting me during the nighttime battles, making it harder to see where the puddle ends and the dark ground begins,

Other examples include blowing up oil barrels to create large explosions, or even using a spell to cause it to rain, and then freezing the wet enemies solid. It is of the utmost importance to utilize these environmental strategies while in battle, especially in tough battles. In some cases, being crafty with the elements turns what should be a difficult battle into a breeze. It can also make battles feel repetitive, but only if the player chooses to approach each battle in one specific way. Diversifying battle strategies is achievable to a degree, and is bound to happen as players acquire new skills.

There’s plenty of loot to pick up, use, sell, and craft in Divinity: Original Sin. Everything has a certain amount of weight, but since it is possible to split everything between the four characters, that’s hardly ever an issue. Inventory management is a bit of an issue, however, especially for those who tend to pick up everything they see, whether it’s a potato or a greatsword. Everything takes up a single square, and that inventory fills of quickly, making it a real hassle to find something in particular. There are various sorting options to help, but they can only do so much. 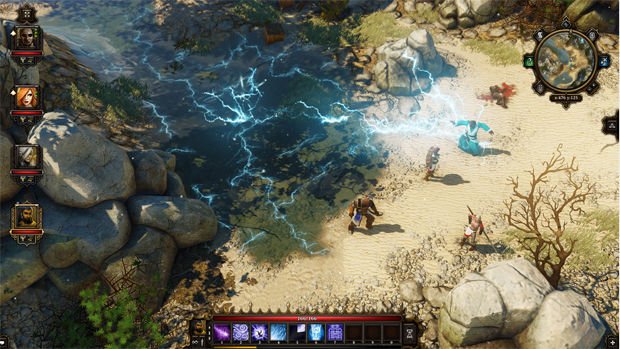 The game features a skippable “tutorial dungeon” that goes over some of the basics of combat, but that’s about it in the form of a traditional tutorial. Although Divinity ignores explicitly stating things like how to craft or even put up quest markers on where to do, this doesn’t mean that the game does a poor job teaching the player things. In fact, Divinity: Original Sin is easily one of the best learning experiences of recent memory. Crafting recipes are found within the world and written out like a journal. When a player reads it, even if they are unaware crafting is in the game, the player will naturally try to combine ingredients that the recipe mentions and voila! Crafting is discovered.

This is essentially how the game treats everything: in-game hints towards objectives or mechanics are given, and then the onus is on the players to actually figure them out. It’s great not to have a game force-feed players the mechanics and instead let them discover things on their own. However one mechanic in particular, sneaking, isn’t explained very well (or at all) and as such I have no idea how to successfully pickpocket someone without getting caught…

As for the difficulty, Divinity: Original Sin will allow players to travel anywhere, but players shouldn’t be surprised when they run into a group of enemies that are a few levels higher than them. If that’s the case, the options are: put your gameface on and fight or hightail it out of there and come back later. Fighting more powerful enemies is doable, considering the first real victory I had in the game was against enemies two levels higher than me, but it is an extreme challenge. This also means, however, that is is extremely rewarding to accomplish.

Divinity: Original Sin also includes multiplayer for two players total. The second player takes over the second created character of the host player, and it’s impossible for a player to bring their own character into someone else’s game. While this may seem annoying, it helps keep the roleplaying aspect in check and also prevents two players of wildly different levels from playing together. The second player can only, by default, control that one character in battle, but it is possible to have them control one AI character as well, it’s just really confusing and obtuse to do so, so not everything always works smoothly in multiplayer. 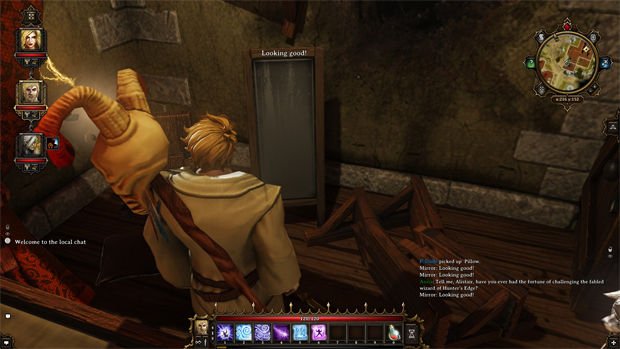 The game has a delightful art style which helps solidify the lighthearted tone set by the plot and writing. When walking around town it is hard not to notice how bright everything is, which helps give a real sense of liveliness to the town. Likewise, the music both in and out of battle is great; it isn’t overpowering but is certainly noticeable and always feels appropriate.

Divinity: Original Sin is an amazing RPG experience. It falls a bit flat on characterization and writing on occasion, but nails just about everything else. It does a great job of compelling players to roleplay their on-screen characters, putting the “RP” back into RPG. This is a game that any fan of the genre will adore, and is sure to suck in new players and teach them what the genre is all about. It’s a love letter, and deserves to be loved back.