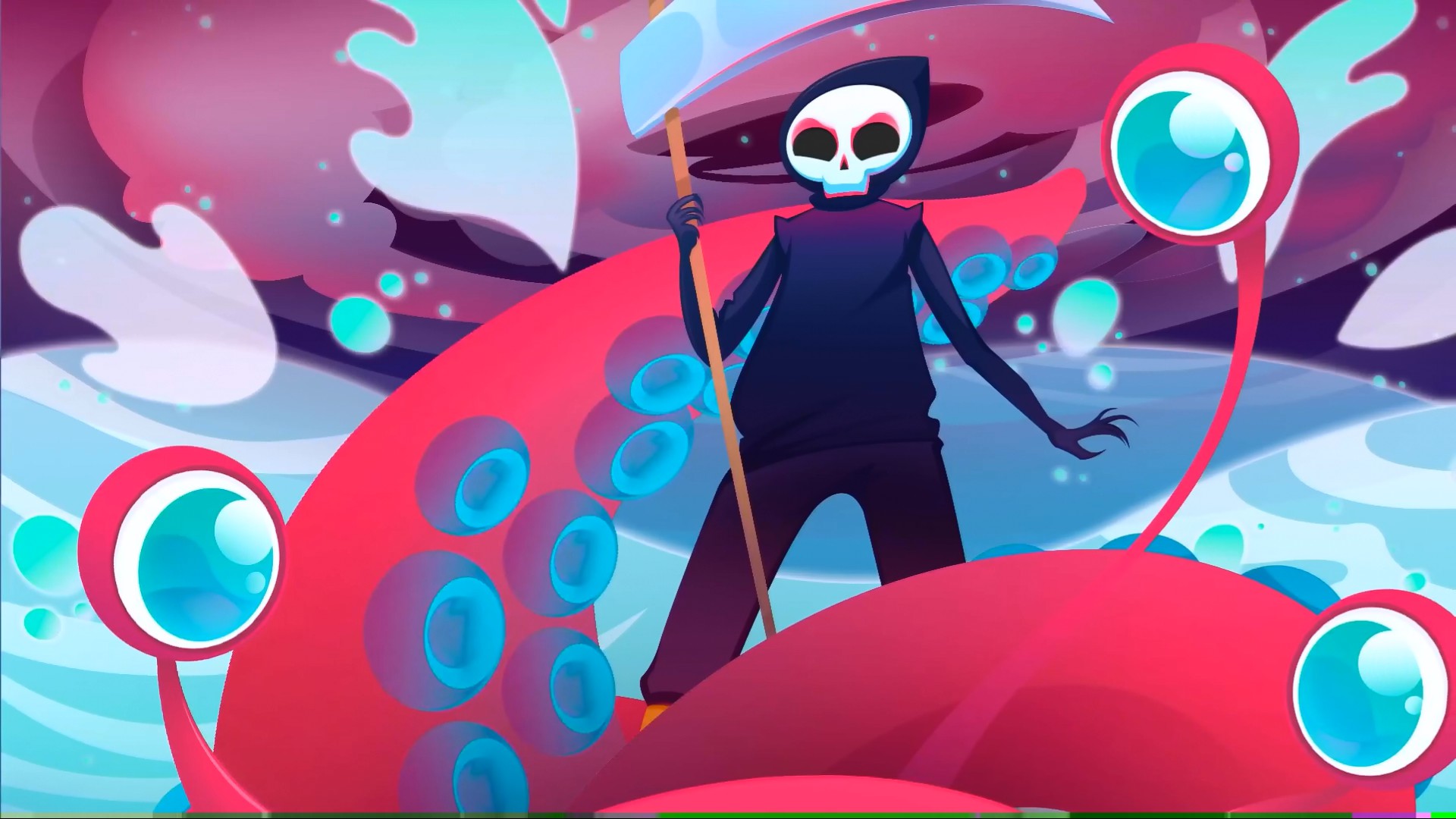 Death is lonely. Death wants some company. So naturally he would flood a plain filled with sheep and wolves, then float rafts requiring very specific numbers of dead creature souls at a time. Obviously.

Divide by Sheep is a math-based puzzle game and to that end it works well. What makes it noteworthy is the window dressing, a whimsical cartoon presentation of fairly morbid subject matter.

Like many well-designed puzzle games, Divide by Sheep starts out with a simple premise, which it builds upon as the player progresses. Groups of sheep in numbers ranging from one to nine are spread across platforms whose sizes can vary within that same range. Sheep can be moved between adjacent platforms, but if a group size ever exceeds the destination platform size then the excess sheep are thrown into the water and drowned.

The goal is to load life rafts with sheep, but only in specified numbers. Too few and the raft won’t launch, too many and the raft will spring a leak and sink. Hitting one numerical goal for a level will unlock the next, but mastering a level requires three quotas to be met in a specific order.

In the beginning, there isn’t a lot to think about. The options for adding and subtracting sheep from a group are small: combine two groups together to increase the number or throw more sheep than a platform can hold to decrease. It might sound complex in writing, but it’s an easy concept to pick up after a few minutes of play.

Not far in, Divide by Sheep introduces new elements to use toward the end of filling up life rafts. Fences block movement between adjacent platforms. Dynamite platforms explode and disappear if they have no occupants. Laser fields will slice sheep in half so one divided sheep takes up two spots on a platform. (This is where the name of the game comes in.)

The first major change comes with the introduction of wolves. If a wolf and a sheep share the same platform, the wolf will eat the sheep and become so obese it cannot be moved or fed again. Wolves have their own life rafts and the two species can never commingle on rafts. It almost reminds me of the old fox/rabbit/cabbage puzzle; there are constant calculations for when and how to feed the wolves in order to get the right number of animals to safety.

A wolf can be fed to completion on half a sheep, so one sheep sent through a laser can feed two wolves. With all of the mechanics put together, there are several ways to add and subtract from groups of sheep and wolves.

What I like about the setup is that even though there is often only one three-star solution to a puzzle, there are several different avenues to mentally attack it from. In some levels when the quotas are high, it’s important to note exactly how many animals can be safely sacrificed. Others require a different kind of foresight, forcing one initial move since all others would lead to failure. Still more are so complex that a sort of trial-and-error can reveal the path to the best answer.

The next big wrinkle comes in the Dark World, where Death finally shows up. He has rafts of his own, and he is collecting souls. It doesn’t matter how the animals die; they can be drowned, sliced, eaten, or burned and he will take them. It eventually gets to a point where sheep can do double duty in terms of raft occupancy. The sheep can be cut in half to fill Death’s raft, then duct taped back together to fill a sheep raft.

That highlights the odd tone of Divide by Sheep. At a glance, it looks like an average cartoony mobile title. The soundtrack is bouncy and upbeat. So the juxtaposition of that G-rated presentation and the graphic slaughter with copious amounts of blood is funny in the same way the fictional cartoon The Itchy & Scratchy Show is. It would be disturbing if it weren’t also adorable.

Divide by Sheep hits the perfect level of difficulty, where every stage makes me think for at least a few seconds (and often for several minutes), but each one is also small and self-contained enough that persistence and critical thinking can always lead to victory. It has never felt too easy nor have I ever been permanently stumped.

It’s smart, it’s pretty, and it never dwells on any one idea for too long. At its heart is a quality math puzzler, but what makes it shine is the dark comedy found in killing cartoon animals just to satisfy some arbitrary numerical requirements.