People once thought they knew what they liked about fighting games — big rosters, big violence, big complex combat systems. The more that a fighting game had, the more it was valued. This caused developers to pack more and more of those traits onto their fighters until they looked like pizzas with a foot of toppings packed on them. Toppings are great, but too much of a great thing can be overstimulating, numbing, and gross. This glut caused the populace at large to lose their taste for fighters for a while.

Sadly, the “too many toppings” formula is already starting to take its toll again, with Ultimate Marvel Vs. Capcom 3 and Street Fighter X Tekken both selling below expectation. When you’ve had so much of a great thing that you can’t taste it any more, what you need is a palate cleanser, something like thin crust pizza. Divekick works to be that pizza, offering fewer ingredients overall, but blending them together in a way that tastes amazing.

Sprinkle a dash of salt on top, and you have the fighting game event of the summer. 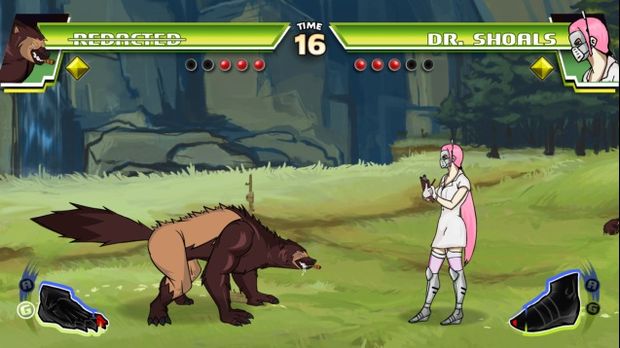 Under the surface is a game that takes itself very seriously. If you were afraid that the idea of a fighter that’s controlled with just two buttons was a joke that would get old quickly, then you clearly haven’t played much Divekick!. Combos, traditional character movement, blocking, and even life meters are out of the equation, but that just leaves room for your mind to focus harder on strategy. Working the angles of your fighter’s moveset to your advantage, as your opponent attempts to do the same, is a constant process. It almost feels like violent Tetris. You may only have five-or-so different kinds of pieces to work with, but finding the best use for each piece at any given time is endlessly engaging.

For most characters, the “Dive” button causes you to launch straight up into the air, Vs Capcom-style. When pressed in the air, the “Kick” button sends you down-and-forward with a (you guessed it) kick attack. When pressed on the ground, “Kick” causes you to kick off the turf with a small backwards hop. Some characters can double-dive, double kick, or carry other variations to the formula, but regardless of the details, moving forward is a constant balance between risk and reward. The only way to get closer to your opponent is with a flying kick, but that will also put you in harms way. Baiting, faking, and mid-air footsie are constants, and the tension is always turned up to the max, as it only takes one successful divekick to take out an opponent.

Each character has an air and a ground special move that’s activated by hitting both buttons. These moves range from the kind of stuff we take for granted in “normal” fighting games (crouching, forward jumps), to more traditional fare like projectiles, levitation, teleports, and auto-counters. These moves will cost you some meter, which you build by performing a (wait for it…) divekick. These specials can make or break a match, but they rarely do damage. The only way to win is to score a divekick, maintaining the game’s single minded sense of purpose. 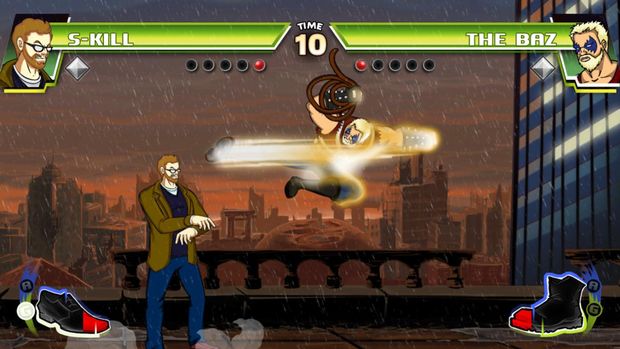 It’s not just about if you score a divekick, but also where you score a divekick. Landing a kick on an opponent’s legs, arms or body will grant you an instant win, but headshots do damage that’s more substantial. Take a blow to the skull and you’ll start the next round dizzy, slowing the character down and limiting their ability to build meter. In a game about gaining air advantage and land the first (and last hit) as quickly as possible, a hit to your speed stat can make the difference between champ and chump.

You can increase your stats as well. Before each match you can select a gem that will slightly increase your jump height, movement, or both (at the cost of putting you one round away from losing). You also gain increased speed and jump height when you hit full meter. Certain characters, like Markman, Stream, and Jefailey, can change more than that mid fight. Jefailey’s head grows every time he wins a match (increasing his hitbox, making him more vulnerable), Markman can assemble an in-game controller that allows him to perform the game’s only shoryuken-style move, and Stream can light his own feet on fire. These little touches and tweaks might not have had much of an impact in your average fighting game, but in the minimalist design of Divekick!, they can make all the difference. 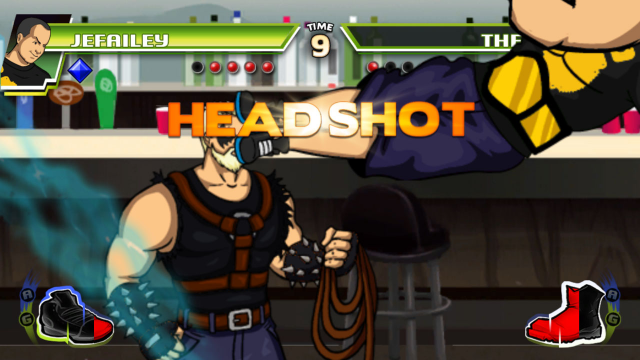 Beyond the main game, there are a few extra features to dress things up. Same console local combat is great on the Vita, with player one using the D-pad and player two using the buttons on the right side of the console. The game is a Cross Buy title too, so you can play it on the PS3 and PS Vita with one purchase of the game.

Online play was nearly lag-free during my matches with both PS3 and PS Vita, but as of right now finding a match is taking a little longer than I’m accustomed to. Online features are pretty barebones at the moment. You have the option for ranked or unranked matches, and that’s it.

The art and animation is also relatively limited. I really like most of the characters designs, though quite a few of them are based on real people, which puts a slight damper on potential visual spectacle. It’s all nothing that a little downloadable content couldn’t fix though. I’ve already got my fingers crossed for Super Divekick!: Turbo Edition. 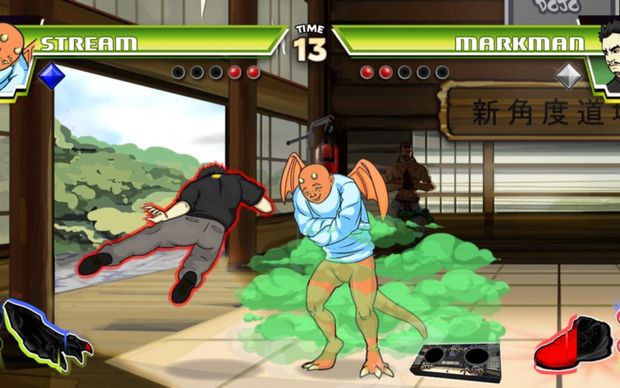 Divekick! sits in pefect balance between the new wave of deconstructed fighting games like Nidhogg, and Samurai Gunn, and traditional fighters like Street Fighter and Mortal Kombat.