I’ve been playing tactical games since the NES, but there was something about the Disgaea franchise that really resonates with me. Offering up a ridiculous level of customization and refinement, Disgaea sat upon a pedestal in the strategy pantheon, with hardly any competition in terms of how hardcore the experience was.

But 10 years later, there are a lot of other games out there able to replicate that feeling, and the Disgaea franchise isn’t quite as reverential as it once was. It’s a good thing then that Disgaea D2 hearkens back to what made the original so great. 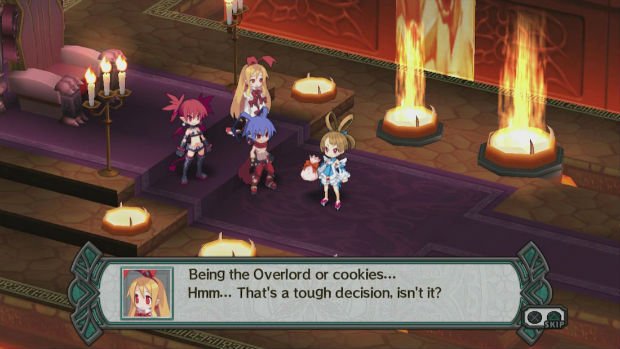 If you’ve never played a Disgaea game before, the focus is decidedly on nonsensical fun, with a touch of anime-style insanity. Disgaea‘s trademark humor is back, including Etna’s anime interludes, Prinny debauchery, and other silly sideshows. The voice acting ranges from over the top to top notch, and if there’s any downside to D2‘s presentation, it’s that the game assumes you already know the characters inside and out — so if you haven’t played the first one, either seek it out or read about the main characters a bit before you dive in.

Tonally, D2 is also in a different spot. Whereas the first game had a story that was nonsensical as well, there were a few brief moments that hit hard and touched on concepts like sacrifice, morality, and death — with a few surprises along the way. There’s basically none of that in D2. Instead, you’ll experience more craziness, like Laharl turning into a girl, or Laharl finding his long-lost angelic sister. But so long as you’re not expecting some earth-shattering revelations, all of that silliness is totally worth watching, and it’s in the spirit of the franchise — in a good way.

As is the case with previous games in the franchise, Disgaea isn’t exactly on what you’d call the cutting edge of visuals. Although the character designs (both new and old) are top-notch stuff, the actual in-game models leave much to be desired, especially near the end of the PS3’s lifecycle. It’s all pretty low-tech, but thankfully the interface is still as sleek and as effective as ever, so you shouldn’t have much trouble navigating your way into any of the game’s hundreds of options. 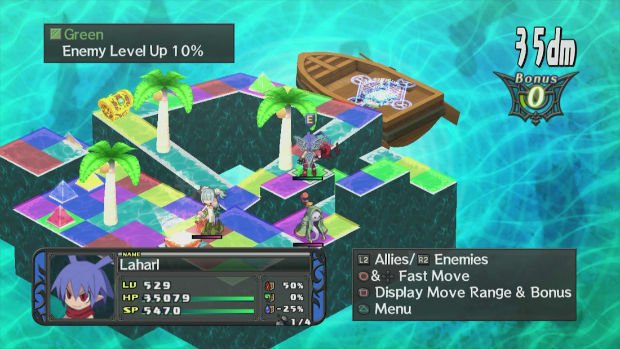 Disgaea D2 is a strategy RPG (SRPG) through and through, as battles take place on a grid-like board in a turned-based fashion. But instead of taking turns individually, the way Disgaea works is you take turns as a team, then the entire AI side goes. So basically, you can plan out each and every move for your entire party, and take it all back, initiate every action at once, or use the “execute” menu option to only queue up certain abilities. It’s an easy to understand yet complex system that really makes the combat sequences in Disgaea special, since you need to learn how to plan out everything at once.

In short, everything you do could potentially combine with something else whether that’s a team attack or just a matter of positioning that varies with every skirmish. The key to Disgaea is that you need to think about almost every individual move you make — especially on some of the more difficult boss battles. With that said, D2 is probably one of the easiest games in the franchise to pick up mechanically, as it’s all laid out to you in the very beginning in a comprehensive tutorial. The only problem is the story jumps in assuming you already know the characters, making for a somewhat jarring juxtaposition.

Customization is king in Disgaea, and it’s just as lively in D2. Using a tool called the Dark Assembly, you can create your own custom party right after the tutorial, and pretty much roll the exact way you want to. If you’re keen on creating a ton of weak fighters to help set up combos — that’s cool. If you want to create a select few powerful casters first or attempt a more defensive strategy, that’s cool too.

You can also set up your party to be apprentices to certain classes and characters, learning their master’s abilities in the process, and creating hybrids. New to D2, you can also raise party affinity levels (which are referred to as “likeability” levels) to connect them to certain party members for added bonuses. Mounting creatures and riding them around is a new feature, which isn’t as fun as it sounds outside of a few test runs. Although, it finally does carve a niche for monsters that really wasn’t as sound as before, and it’s far superior to the Magichange system of previous games. 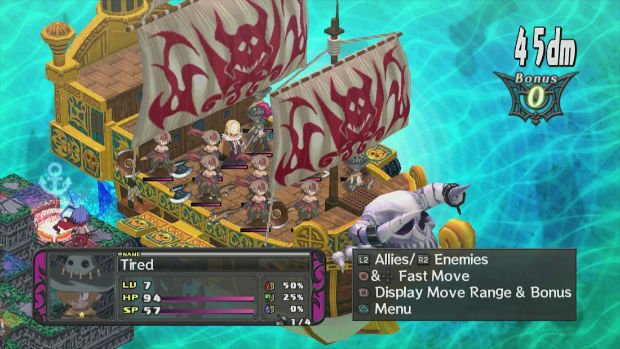 You can also change the game the way you want to, like raising or lowering experience or currency rates. Although this was always an option to an extent, D2 takes it to an extreme, with a mechanic called the “Cheat Shop.” The concept of the Disgaea series is pretty simple — if you can dream it within the confines of an SRPG shell, you can do it.

Various mechanics from past games are pretty much all here, like the ability to combo attacks when next to each other. Geo Panels also return from the old games, adding a puzzle element to the proceedings, coloring different pieces of the grid with different modifiers like “enemies do 50% extra damage when on green tiles.” Throwing returns as well, which allows you to create stacks of characters and reach areas you otherwise wouldn’t be able to while walking. Again, character placement is key.

The Item World returns, and like other entries’ iterations of the concept, it doesn’t disappoint. As one of the wackiest concepts to ever grace gaming, every single item has a “world” that you can give into, with a certain amount of “floors” in it. As you progress to each floor, your item will become stronger. When combined with the ability to “reincarnate” and start all over from level one (with a certain degree of prior stats) and raising the difficulty by way of the Dark Assembly to the maximum, the race for level 9999 and top item levels can result in hundreds of hours of gameplay. 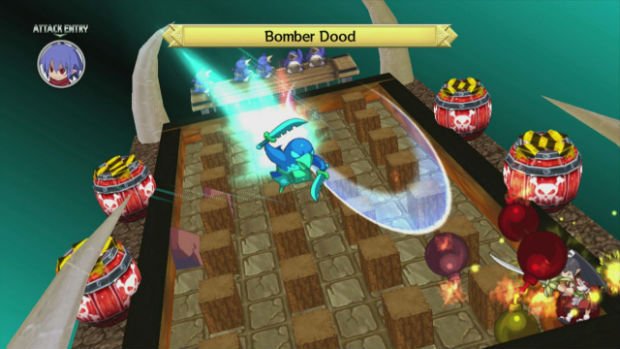 As a result of its mixed messages, Disgaea D2 is in an odd spot. It’s a tad easier than previous games, but it also unmistakeably requires a good amount of series knowledge to really get into it and appreciate the characters. But I do have good news — if you want more Disgaea, this delivers. Even if you’ve skipped every single iteration since the first, you can jump right into D2 like nothing ever happened, and enjoy it all the same.