Back to demonic roots

I’ll never forget a conversation one of our readers had with someone who was down on Devil May Cry 5 after the reveal. Their response to another community member who felt burned by DmC: “Mate, there’s a giant monster eating cars with his chest in the trailer, the game is going to be fine.”

How right they were. 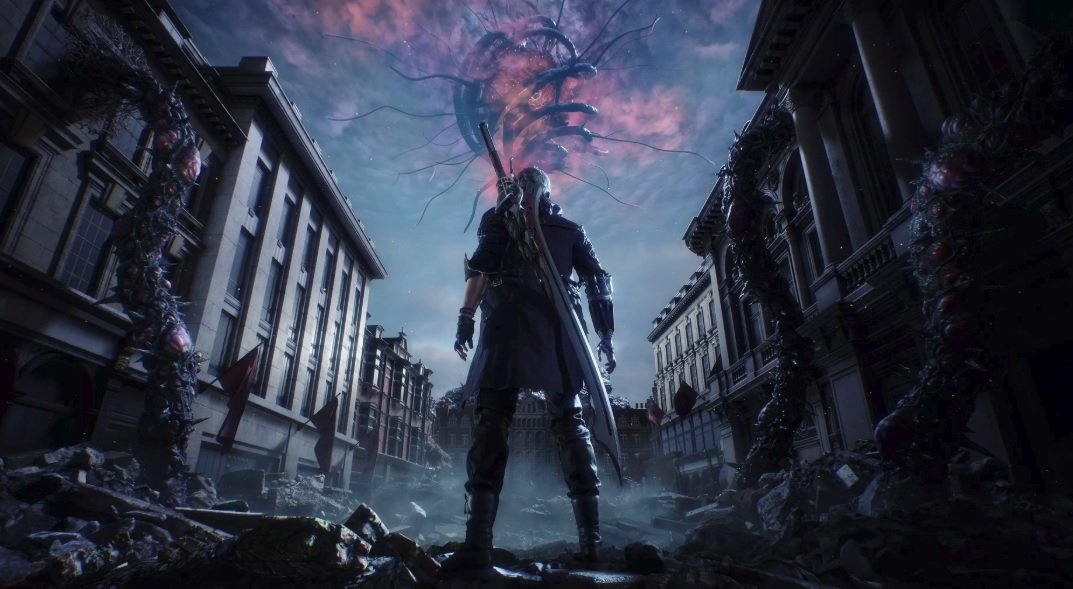 Devil May Cry 3 is still the gold standard for action games and I’ll take a moment to tell you why.

Coming off the ill-fated Devil May Cry 2 and saddled with directorial duties after the original seat was jettisoned, Hideaki Itsuno had something to prove. He went all-out for the third entry, packing in so many different concepts that it was almost overwhelming yet ultimately satisfying once you figured them all out. The pacing was succinct, the prequel conceit allowed the team to play around with previously conceived notions of the series, and at launch, it was one of the most challenging action games ever released (it was later revealed that originally in the West, the default difficulty setting of “normal” was actually Japan’s “hard”). It was the perfect storm for an action entry that in my mind, has only been approached by the Bayonetta series.

DMC3 was seemingly the apex of action and Itsuno couldn’t top it with his next effort. Although Devil May Cry 4 was on point mechanically, knocking it out of the park with two different characters, it suffered from an uneven campaign with tons of backtracking. Devil May Cry 5 feels like a genuine response to those complaints alongside a sprinkling of the secret sauce that made the third entry so great, topped with a hearty helping of original work. Even the menu sounds at the very start (like the “boom…Devil May Cry” voiceover) help set the tone.

A tone, mind, that’s familiar, but welcome: a demonic force is terrorizing the world and a group of demon hunters needs to stop it. It’s straightforward and basically serves as a device to thrust the entire gang (Dante, Nero, Trish, Lady, plus newcomers Nico and V) into the spotlight to take down a big bad. With trademark comedic elements and absurd style baked-in it feels authentic, like you’re along for the ride. Devil May Cry 5 is just as over-the-top as the series has always been without taking itself too seriously: it’s the most obvious virtue that’s been put by the wayside in the past. New players shouldn’t feel lost, either. Not only are the four preceding core stories relatively easy to explain, but there’s also a text-crawl “history of the series” movie to watch from the main menu. Let me be clear though: if you’re expecting anything mind-blowing or genre-defining, you might not need to get on this train. This is an old school-minded Bayonetta-esque action romp that doesn’t pretend to be anything more.

Your chief tritagonist is Nero from Devil May Cry 4 with some newly minted gimmicks. In lieu of his now-missing arm he can utilize “Devil Breakers,” clever transitory junker items that are so fragile, they’ll break on a moment’s notice. They’re so cheaply made that they’ll disintegrate if you use their ultimate power, use them to break away from an enemy combo or grab, or get hit once while wielding their power (Punch Line, a rocket fist that kind of flies around and does its own thing, is my favorite). To make up for the fact that you’ll be arm-free after they’ve all been ground into dust, Nero also sports a pulley system for grabbing smaller enemies or propelling himself closer to big ones.

All of these abilities do a better job of keeping players in the fight than his Devil May Cry 4 kit. Nero really came into his own after I slammed an enemy into a wall then quickly grappled them back and drilled them into the ground. Where I started to click with Nero is when I realized that his Devil Breakers are completely expendable. There’s no point in holding onto them once you’ve mastered dodging: just keep the sparks flying. Nero’s enhanced focus feels more justified this time around.

Then there’s the Adam Driver-ass V. He might look like a total dullard, but his wisecracking talking bird rules and so does his whole combat vibe. His whole thing is that his minions (a ranged bird, a melee panther, and a giant behemoth governed by his super meter) beat up enemies for him then he finishes them off with his magical cane. I dig it! You can control your creatures while doing other actions with V, like initiating a more pronounced shadow dodge or reading poetry (seriously) to recharge his super (Devil Trigger) gauge.

That same gauge can power-up minions in an “EX” fashion if a certain strategy is favorable, which allows you to manually adapt as you survey the battleground as a commander of sorts. His summons have combos and multi-directional abilities, so you aren’t just spamming them or letting them fight. There’s nothing like surfing a dark nimbus cloud to get around while you’re independently operating your minion bird to shoot projectiles.

As for Dante, all four of his styles (the speed-oriented Trickster, melee-centric Swordsman, ranged Gunslinger, and defense-minded Royal Guard) return and are hot-swappable, but this time with new weapons in tow. Cavaliere, the motorbike found in nearly all of the trailers, is actually a set of twin chainsaw blades: combined with the Swordsman style, he can ride it into the fray and grind up enemies. Another, a cowboy-themed power which I won’t spoil here, is one of the most unique in the Devil May Cry universe. From a series that once conceptualized Pandora’s Box as a briefcase full of endless weapons, the weaponry is right on the money.

Dante’s styles really are the focus though because once again the swap technique works flawlessly. One moment you might be twirling around shotguns to keep away a mob, then swap to swordsman to isolate a big threat, then in half a second throttle to Royal Guard to perfectly parry an attack, throw back the force of the blow, then use Trickster to dart away and flow back into combat with a teleport.

V and Dante (which have their own skill trees) were game-changers for me in the sense that they took Devil May Cry 5 to the next level, marrying new and old-school trains of thought respectively. All of this is present while trying to master Devil May Cry‘s combo system (which goes all the way up to SSS-Stylish, unlocking more intense music as you go), a kind of minigame on top of mere survival. This is a series that boasts a taunt button simply for boosting your score: not something you see often. The stylish focus is partly why Devil May Cry is still relevant.

Enemy variety quickly gets spicy. At first you’ll do battle with some nasty bugs, then duel with grim reapers with thorny crowns then hooded dual-cleaver berserkers. Bosses are memorable and formidable, and several are seared in my memory with the best of them. Devil May Cry 5‘s environments are equally impressive and the RE Engine serves the series well. In some cases floors can fall out, leading to new zones, and there’s some really expansive areas where you can see battles going on in the background. It’s the kind of game that makes a commanding use of its photo mode. 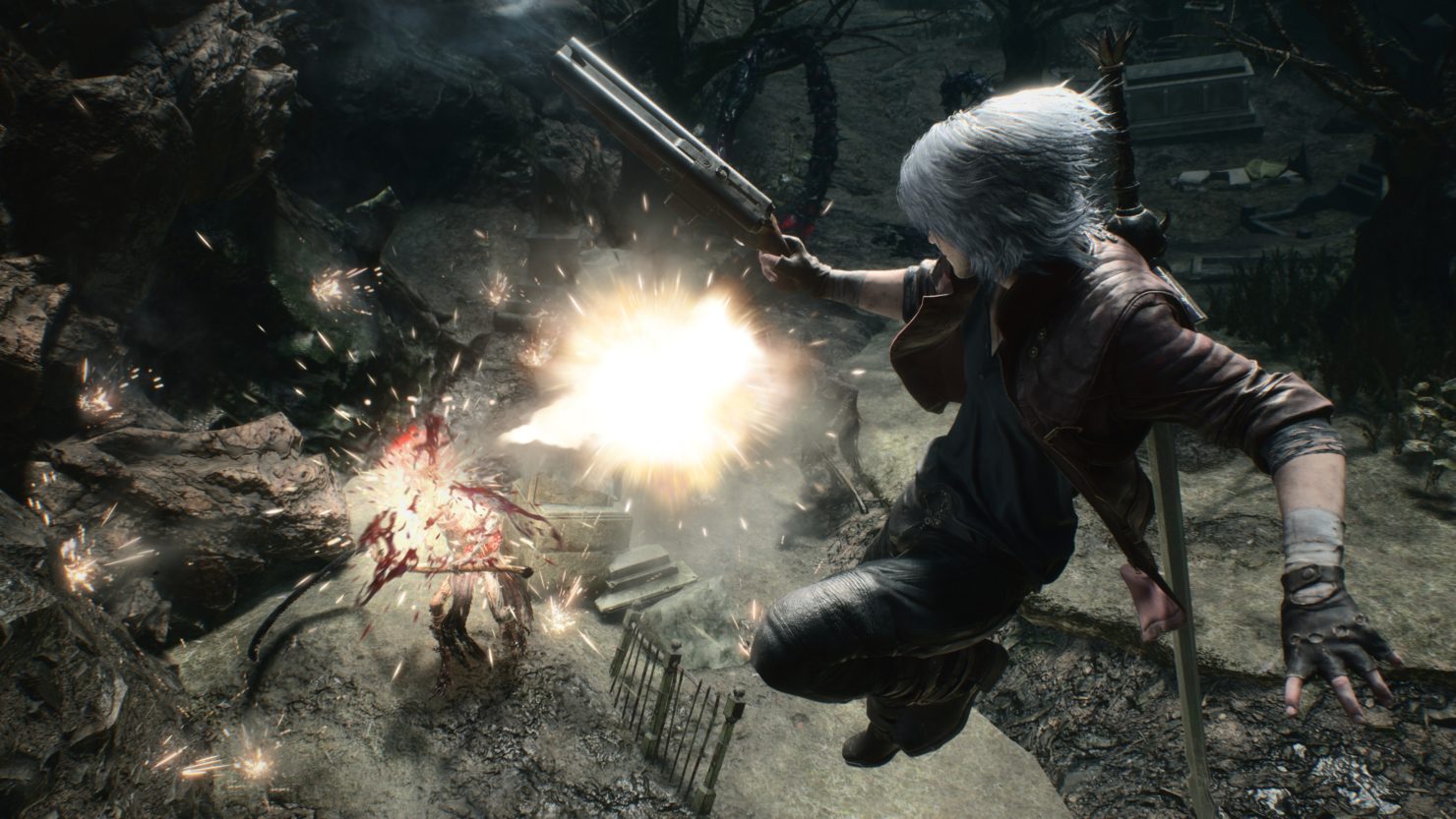 Backtracking from DMC4 is eschewed in favor of different perspectives for several levels, which are thankfully optional for completion (read: stages where you can choose a character only need to be beaten once, which is rad). Load times are relatively short and pacing is on point from minute one. There isn’t a lot of boring exposition and pretty much everyone gets their ass kicked by the main villain right away (who doesn’t even bother to get off his throne), without an overwhelming sense of “having to power up” for ages to take him on again; more like a general drive and purpose propelling the narrative.

My complaints are few and far between, and one of them is complicated. There’s a very brief (like, several minutes if you know what you’re doing) “boss rush” type level with three encounters. At first I was flabbergasted at its customary inclusion, but after figuring it out I made short work of it and accepted how it slots into the big picture. Then there’s the Red Orbs (which you use to buy everything, from items to abilities to revives, on top of the traditional “extra life” Gold Orbs). Remember when it was announced that Capcom was monetizing the game’s currency? This is that discussion.

In short, you can buy Red Orbs in bulk, even at the time of death to revive. It’s weird, in an “Xbox One launch” type of way back when it was considered new and didn’t even fly then. Now if you hate the mere thought of them even being included, you can skip out, I won’t be offended. But for the rest of you who are wondering if they impact natural advancement, I’d say “no.” Not once did I feel like I wasn’t earning enough orbs to buy what I wanted and progression felt roughly on par with the rest of the series. If you want absolutely every ability (including some of the endgame ones) you’ll need to go through the campaign at least twice across two different difficulty settings: that hasn’t changed. 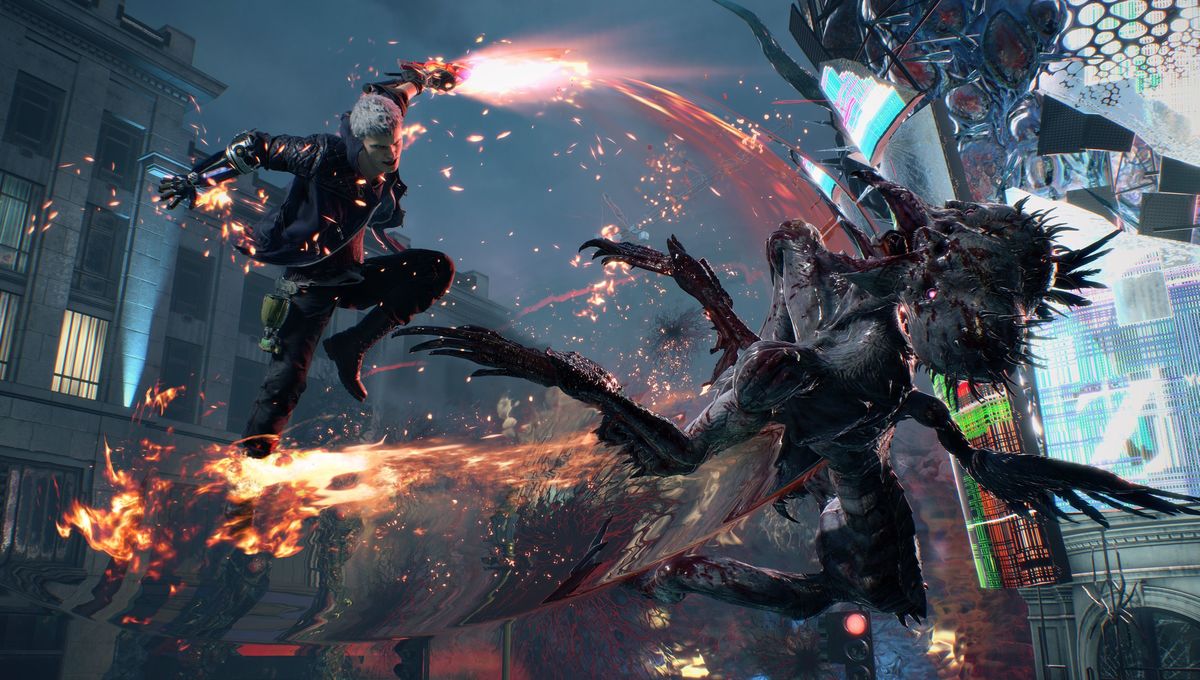 After the campaign is done you get to keep all your skills across all three characters, plus one extra endgame power that completely changes the way one of them plays. I started working my way through Son of Sparda (hard) as soon as the curtains fell without any sort of fatigue (those optional character levels are suited for replays). There’s also plenty of secrets to locate (including inventive ones with tricks like blowing up walls with V’s Devil Trigger minion) and extra difficulties. Dual-audio is being patched in at launch and the classic Bloody Palace mode (challenge rooms) arrives next month. It feels complete.

I’m going to be playing Devil May Cry 5 weeks from now in the short term and years from now long term. This is the sort of fine-tuned wacky action game the genre deserves.