Prepare to bunny hop in HELL

I had no knowledge of Devil Daggers until about two weeks ago, when the developers contacted us through our tips email. The name was intriguing enough, but after a hurried look, it subsequently faded from my memory and began its descent into inbox hell. In the last couple days, I’ve heard chatter about it through various social media platforms, so I decided to dedicate at least a few minutes to it before I went to bed. 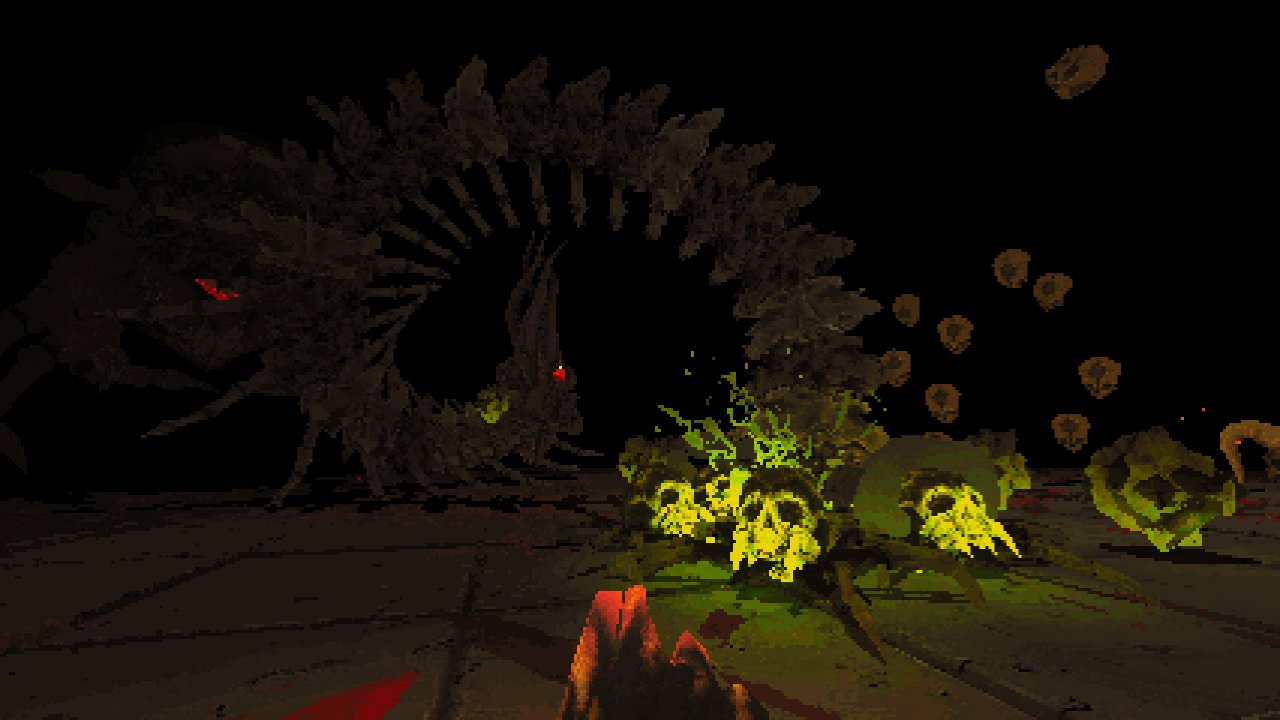 If you took a glance at the developer and tried to extract “Sorath” from the dirty gray matter in your skull and failed like I did, allow me to clarify. One of the members of Hitbox Team (Dustforce and the upcoming Spire) struck out on his own and joined some friends to form the group. They chose this demonic moniker for themselves to summon forth a first-person arena shooter inspired by arcade games and a 1990s aesthetic.

It starts simply: you begin in a room engulfed in shadows, with a single spotlight shining down on a floating dagger. You have no choice but to take it, which immediately transports you to a large flat plane surrounded by the abyss. Within a few short seconds, a small hum will start emanating from one direction of this circular hellscape. A monolithic, living totem will begin floating towards you as its skeletal tentacles open up skyward, releasing a horde of angry skulls. These skulls do not seem to be happy with your decision to take the dagger as your own. Trust me when I say that the killer craniums are the least of your problems.

By clicking the left mouse button, you can release a shotgun blast of daggers at your demonic foes. If you hold it down, you’ll fire a quick, weak stream of daggers instead. There’s also a jump button for evasive maneuvers, and that’s essentially all you’ll have to deal with control-wise… except that isn’t true at all. With a bit of creativity and memory (only ’90s kids will understand, har har) you can use these few buttons to become a bunny-hopping, demon-slaying champion. I’ve killed my wrist as I’ve rocket (dagger) jumped above the clattering remains of cadavers to rain re-death upon them. I’ve done that dumb thing where you forget to close your eyes because you’re afraid of losing sight of enemies for even a second, and feeling the burn as my eyelids later make up for lost time. 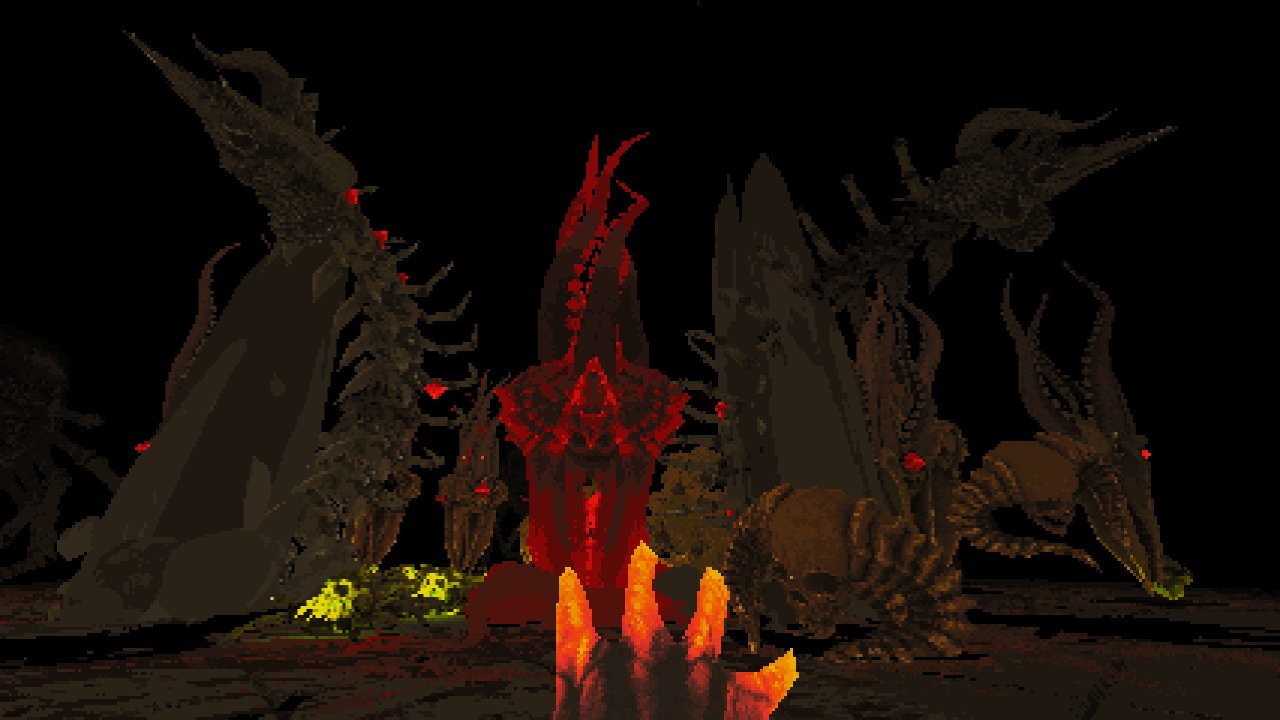 Killing bigger hell-beasts nets you crystals that move towards you like a magnet unless you’re still shooting. Getting ten of them upgrades your attacks, and some other number that I’ve yet to reach makes you even stronger and adds homing daggers. Learning how to prioritize your targets so you have room to breathe and absorb these crystals is part of the huge challenge, and I’ve found myself verbally counting down when I get one. “THREE…TWO…ONE…LET’S FUCKING DO THIS,” I shout, seconds before getting my ass vaporized.

Devil Daggers is not a game that anyone could beat on their first try (take that as a challenge, by all means), and its creators know this. Since the whole point is surviving as long as you can, the leaderboards allow you to watch top players’ runs so you can learn techniques that you haven’t considered, or see the horrific enemies that you’ve yet to encounter. Right now, b0necarver is at the top of the chart with more than eight minutes survived, and their run is incredible to watch. As they slide under the gargantuan flying centipedes with perfect aim, it’s difficult not to jump back in and try to eke out a couple more seconds on a playthrough. Keep in mind that even though b0necarver is currently the best player, he/she isn’t even successful in defeating what looks to be the final boss. Take a look at how hellish the game gets after the minute mark:

How about those sound effects, eh? Each abomination has such a distinct, awful noise, making it easy to know what’s slithering through the shadows after the first time you encounter it. There’s a richness to these crunches and crackles that feels integral. In fact, I tried playing without sound and died almost immediately, so make note of that if you’re hard of hearing. There’s no music to be heard here, but the cacophony of corpses is loud enough to be its own deathly symphony. Of course, that didn’t stop me from playing a few rounds with some of my favorite metal songs chugging in the background (and promptly dying).

This PlayStation/1990s shooter aesthetic won’t be palatable for everyone. To me, the visuals scratch a sentimental itch, and the jittering polygons actually serve to make Devil Daggers unnerving. I realize that’s because I was raised on horror games that looked like this, so your mileage will almost assuredly vary. Yep, this is the virtual equivalent of buying pre-stressed jeans with holes in the knees. Sorath seems to have realized that pressing the nostalgia button had to go deeper than just using a graphical style, and so it found a way to distill old arena shooters into a perfect form. It helps that the game runs baby-butt smooth and finds a way to make unfiltered textures look beautiful in their own way. 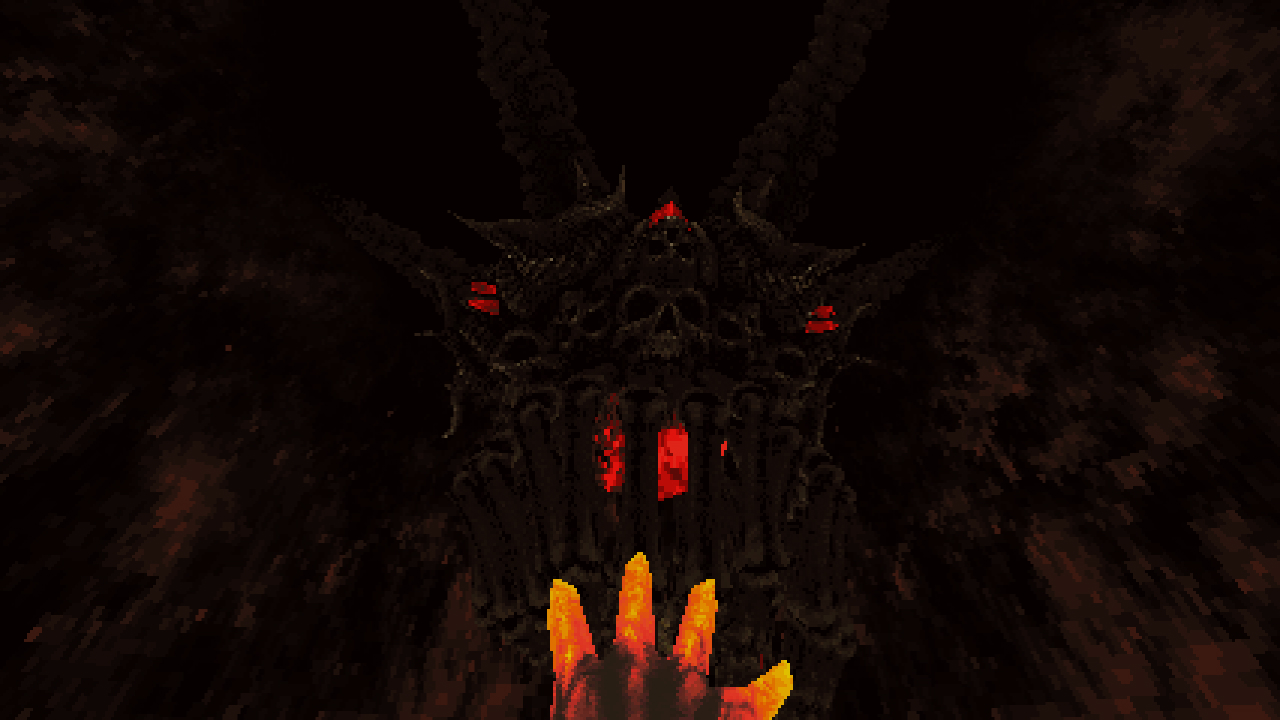 A short scan of the Steam discussions for this game show numerous users clamoring for Sorath to use this style for a fully-realized, level-based shooter similar to Quake. I understand why folks’d want that: it sounds great! Others have derided Devil Daggers for having no content other than a survival mode. Sure, if we’re being reductive, you could call this “first-person Geometry Wars with Quake graphics” (as if that would be a bad thing in any universe), but that’s the game the developers intended to make. In times like these, it’s best to think deeply about what you want or expect from a game versus what a game actually is. If developers only made exactly what people asked for, we’d have too many portraits of dogs playing poker. I’m glad Sorath found a way to make this archaic little hellscape seem so fresh.

I’m currently at #300 out of around 2,700 players with 115 seconds survived, and it’s about time for me to walk away from this review so I can ascend even closer to the top. This game is not for everyone, but if there’s even a little part of you that wants to hurl daggers at skeletal spiders under extreme duress, I recommend you go to hell. It’s fun here.