After a pretty tantalizing teaser, Square Enix was all set to announce the anticipated follow-up to the successful Deus Ex Human Revolution — and much to the ire of fans, it ended up being a mobile exclusive.

It’s not all bad news though, as Deus Ex: The Fall actually works pretty well considering the platform, and offers up a lighter, more portable version of Human Revolution. That said, it would have been a much better experience on a dedicated portable — or at the very least, anything offering tactile controls. 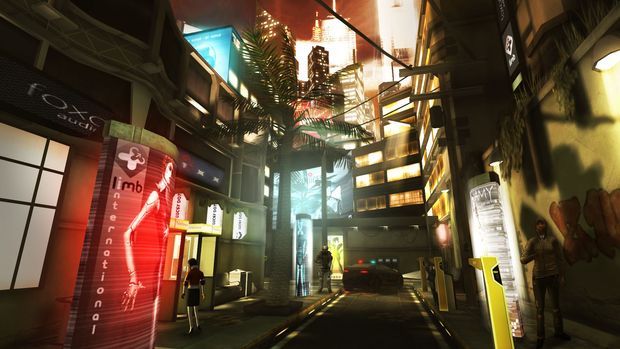 The Fall opts to jump in at a fairly odd part of the overall Deus Ex narrative, picking up with the story of soldier Ben Saxon after the novel Deus Ex: The Icarus Effect. The “Icarus Effect” is the psychological practice of limiting the individual potential of humankind to maintain the status quo, and the “Tyrants” — a PMC of sorts that Saxon formerly belonged to before he was betrayed — are a delivery system for said effect. To be blunt, the narrative is not nearly as engaging as the story of Adam Jensen in Human Revolution, as the vast majority of the story tends to fall short of your typical “soldier’s revenge” tale.

But despite the less engaging narrative, Ben’s method of revenge and destruction is very similar to Jensen’s tactics in Human Revolution, as the core gameplay of the franchise is preserved despite the move to the mobile platform. I’m pleased to say that although they are pared down at times, there are situations that faithfully mirror Human Revolution, such as the ability to choose between a guns blazing, stealth, and hacking approach (or any combination thereof). 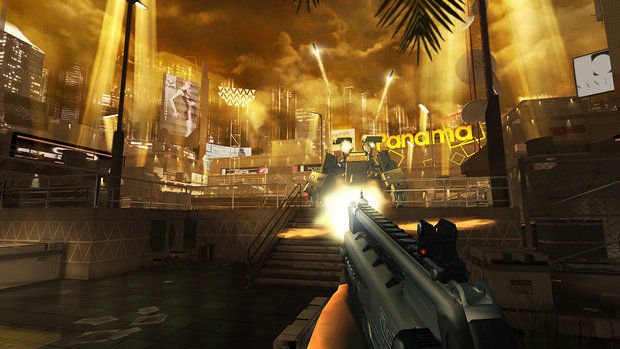 This freedom is immediately evident, as one particular area towards the beginning of the game gave me the ability to hack through a shortcut to avoid a dangerous trip through a drug den — but only if I had enhanced my hacking abilities fairly early into the game. This design continues throughout the entire game, offering up a decent chunk of sidequests, hidden areas, and collectibles to keep you interested. Ben can upgrade his abilities via augmentations in all three disciplines, which allows you to customize him the way you want to play.

The first and third person mixed perspective returns from Human Revolution, offering up a zoomed out viewpoint when in cover, and an FPS style view during the vast majority of the game. Movement and aiming are controlled by two virtual joysticks on the left and right side respectively, and most of your actions (including firing) are performed with virtual buttons, which can get a bit dicey when you’re really in the thick of combat.

Now, I don’t mind touch controls in the slightest for the vast majority of mobile experiences. Games that are designed for the platform tend to have a variety of tricks of the trade that help curb the lack of tactile feedback, and sometimes, games can actually feel better with touch controls. But here, even with the accommodations with auto-aiming and on-screen buttons, I can safely say a controller would have provided a clear-cut better way to play The Fall. 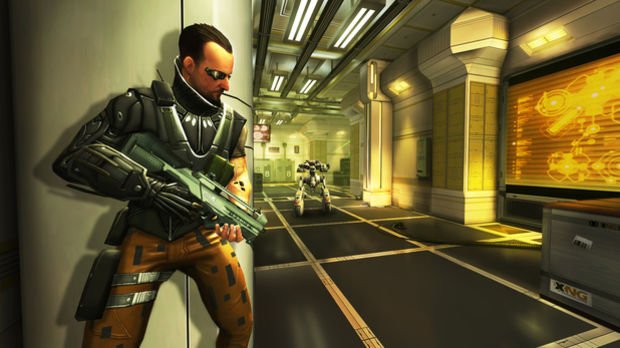 Thankfully, there are some moments of reprieve, such as the ability to re-arrange the entire UI to your liking, and the option to toggle the virtual analog sticks on or off. You can also just tap the screen to move to the desired location, tap cover to snap to it, and tap enemies to auto-target them, so it is manageable if you embrace it — it’s just not ideal. It helps that the visuals look very sharp on an iPhone 5, to the point where it approaches early life cycle PS3/360 quality.

The Fall should last you around five hours, which, for a Deus Ex game, is fairly brief. There are a few story choices, to make but these don’t really feel poignant as much as vessels for a slightly different narrative. Thankfully, the variety in how you approach actual scenarios is where you’re going to get your replay value from, and thanks to a New Game+ option, The Fall offers a chance to try out different missions, augmentations, playstyles, and seek out new areas or collectibles. 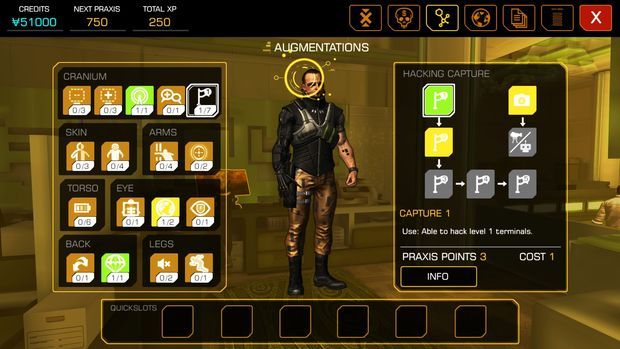 There are microtransactions present that allow you to buy items with real cash, but I never felt compelled to use them, and many times I tested the game in Airplane Mode just to see if it would break if it couldn’t contact the in-game store — it didn’t. Thank goodness for that, because The Fall would be a pretty hard sell with egregious paywalls.

Deus Ex: The Fall works far better with touch controls than one would think, and it offers up a lighter, if a little bare-bones Human Revolution experience. In many ways though this experiment feels like a waste, as it would really be stronger as either a PlayStation Vita game or even a downloadable console title. Until a potential port rolls along, I’d only really recommend The Fall for mobile veterans who are already acquainted with first-person games on the go.