In the several days since Destiny: Rise of Iron launched, I’ve basically been doing nothing but play it.

While it’s meant to last casual players weeks on end, my raid group and I chewed through, and although we still have some SIVA Clusters to collect and Exotic questlines to wait for, for the most part, I’ve seen all of the content on offer.

And even though some of it is a retread, Destiny is just so fun to play that it’s hard to notice sometimes. 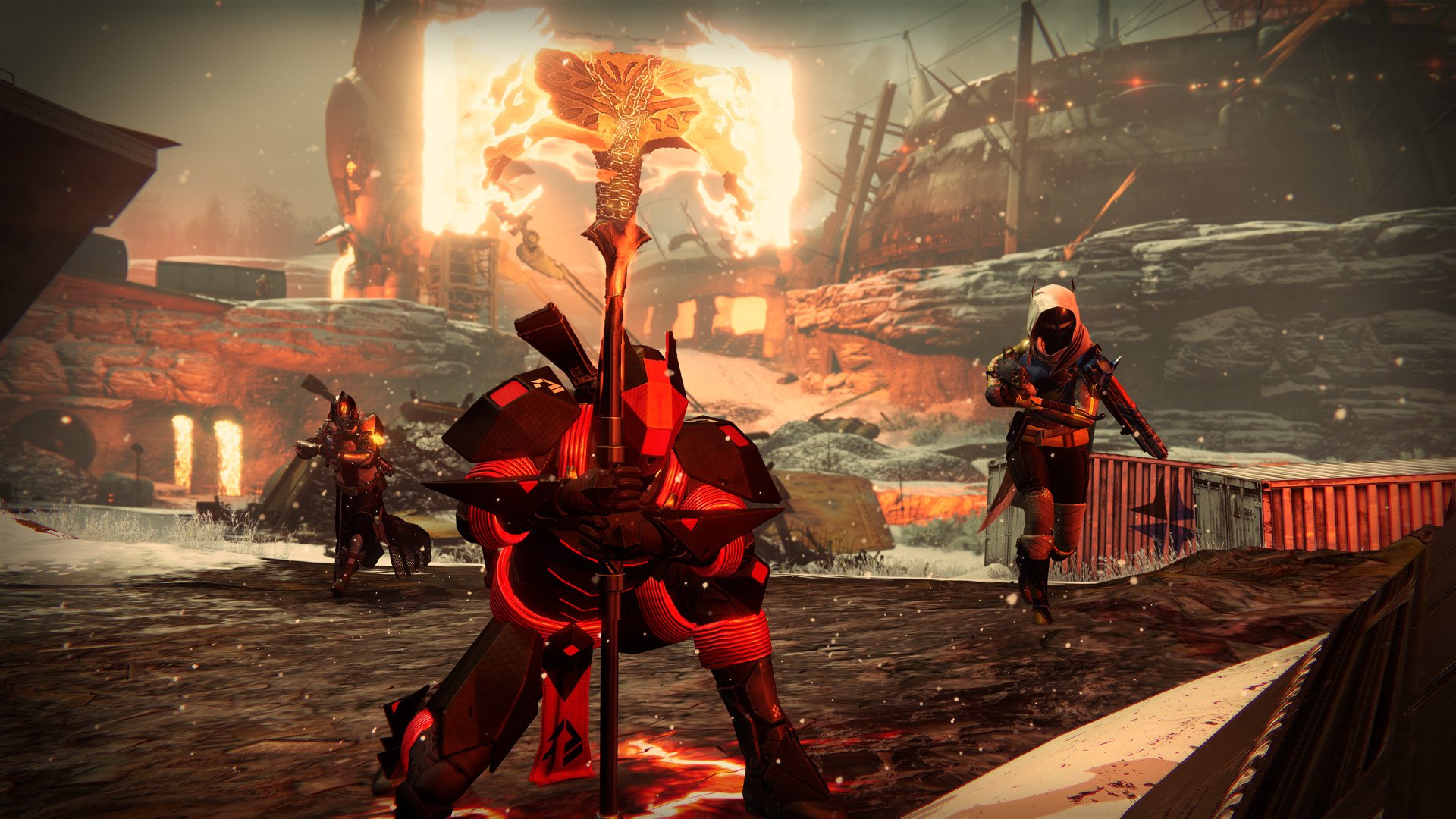 The general feel of the DLC is a little more weighty than Taken King even if there’s less to do.

The snowcapped areas and the SIVA destroyed structures have a distinctive red and white thematic element that shines above the “more adventures in space” angle that the Taken enemy took, and areas like the Forge are some of the best looking, if not the best, areas in the game. Speaking of the Forge, even if some people haven’t been able to experience it to the fullest, Destiny is at its best when you play it in a group — especially since Bungie has gone through great lengths to divide people with small party sizes and a lack of matchmaking on most of the fun activities.

For those of you who aren’t aware, Archon’s Forge is basically a giant arena mode that occurs in a public space. You can bring a fireteam of two other players along as it takes place on the new Patrol mission, but other random people can join you too if they stumble upon your instance of the game. Yet, you need a team to do it consistently, as you can only queue up a Forge encounter with a SIVA offering item that randomly drops from SIVA enemies — and you can only carry one of any type at any given moment on each character.

So if you play solo entirely, tough. Odds are you’ll get one offering every 30-60 minutes if you play diligently, and you’ll have to either wait for randoms that could possibly screw up a Perfected purple Forge encounter (the hardest difficulty, and the most fun), or just not do the Forge at all. It punishes solo play in a way that Court of Oryx never did, since you need a team to do it consistently. As for myself, I’ve been having a hell of a time with it. I have a network of Destiny players and have been setting up instances where we go in with three offerings, ask a random player to invite two of us in, and then go at it with a full party of six people with six offerings.

Since offerings can drop inside the Forge, we’ve actually had a few non-stop, hour-and-a-half sessions where we just put them in and play. It’s what Prison of Elders should have been, and it’s a lot more team-based and open than Court of Oryx. That’s definitely not going to be the experience of the average “every once in a while lone wolf” Destiny player, but it’s an option, and it’s a cut above most of the horde modes copied and pasted into games these days.

I also see an improvement in terms of Bungie’s Strike design. There’s a few random elements added in and attempts to innovate like traps and tougher arenas that try to cut down on “cheese” spots where you can hide and shoot from a safe distance. But my main problem with Destiny also arises with two of the three new Strikes — they’re re-used levels we’ve already seen before. I mean, they’re enjoyable, but why not rework all of the Strikes? The layout is already there. And even if the team just changed a few things and swapped out the models, it would be an excuse to go back to legacy content. But for now there’s only six relevant Strikes or so, which the player base has just been grinding out over and over.

Another contentious element is the re-introduction of the Gjallarhorn as a “Year 3” weapon. Yes, it’s still very good even though everyone can get it from an easy (but well-designed) story quest, and I’m torn. I don’t actually have an issue with giving them out like candy. There was a really weird meta in Year 1 where it created a rift between the haves and have nots, and many groups required potential raiders to have one. If you play a lot and thus randomly pick it up (or had the foresight to grab it from Xur, the Exotic weapon vendor, on week two of the game), you were in. If not, you were on the outs.

The real problem is that it limits weapon diversity, as you can only have one Exotic weapon equipped at a time — whether it’s a primary, secondary, or heavy slot. So in 90% of the endgame areas I’ve been playing in, people are using it. Just like Year 1, it doesn’t necessarily take away from how great of a shooter Destiny is entirely just by virtue of having this weapon available as an option, but I question the decision to make it this good again. 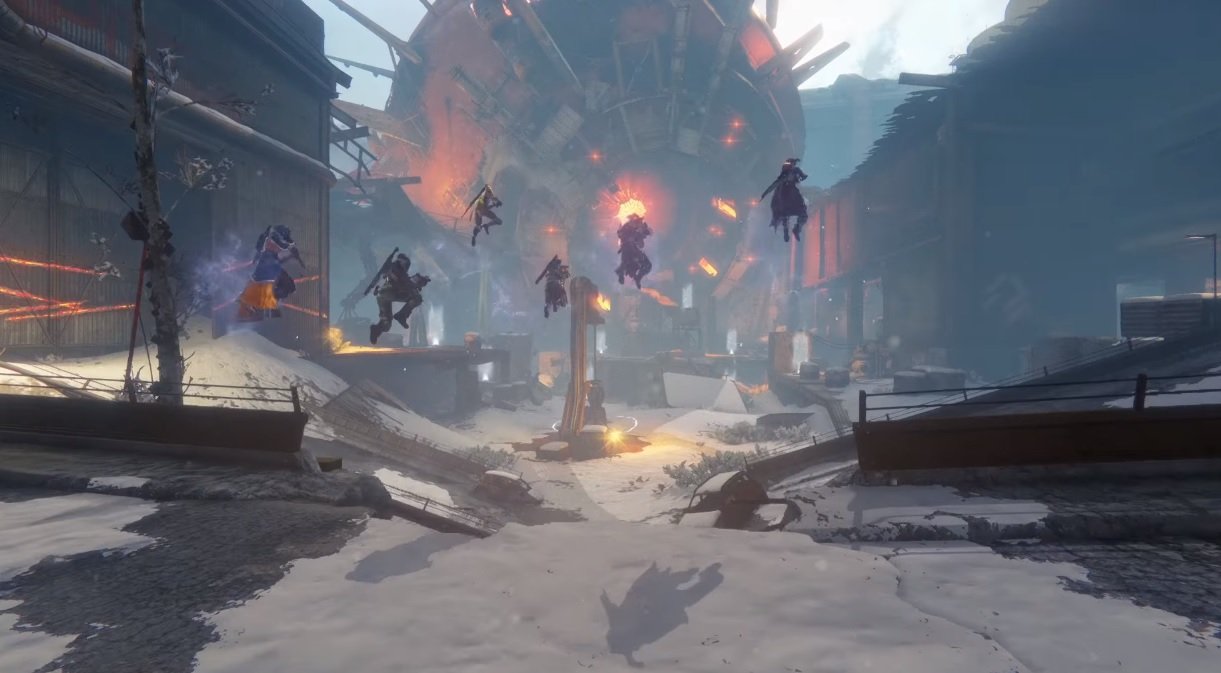 Which leads me to the main event that most people are going to be playing for months on end, Wrath of the Machine. I was able to give it a go today, and while I need a little more time to talk about it at length, I am happy with what I’ve seen so far. All of the raids have been prominently set indoors, so having at least one fight outdoors is a plus, and the SIVA enemies are a little more interesting, both aesthetically and strategically, than the Taken. I’m slightly concerned about the lack of difficulty for several fights, but Hard Mode isn’t available yet (we got the final boss).

Another element I got to spend a lot of time with is PVP, known as the “Crucible.” Now, Rise of Iron doesn’t really add a whole lot in this department outside of some new maps and another mode (basically Kill Confirmed in Call of Duty), but I’m starting to come around to the idea of PVPing regularly. That’s not merely because of the introduction of private matches in a bid to become the next eSport. There’s just so many great maps to choose from, and I feel like Bungie has started to get its bearings on deciding what Destiny PVP actually means. This is the type of incremental change I don’t mind.

Destiny: Rise of Iron is a weird cookie. Bungie clearly put its live team in charge on this one, as there’s nowhere near the amount of completely new-feeling stuff packed in as there was in Taken King — and with so many people getting winded, a step that big was really needed. Yet, if I assess Destiny right now as a total package, with four expansions under its belt and hundreds of [good] tweaks and patches, it’s easier to recommend.