Desktop Dungeons has been around for a few years in some form or another. The original low-fidelity freeware alpha has been playable since early 2010, and we saw the first bits of the updated beta in 2011, where the project existed for more than two years. Finally, Desktop Dungeons has seen its official full release, and for the most part, it is the same as it ever was.

That may sound like a condemnation, but anybody who has experience with Desktop Dungeons knows it isn’t. Being the same core game with a few added frills is the best thing it could have done. 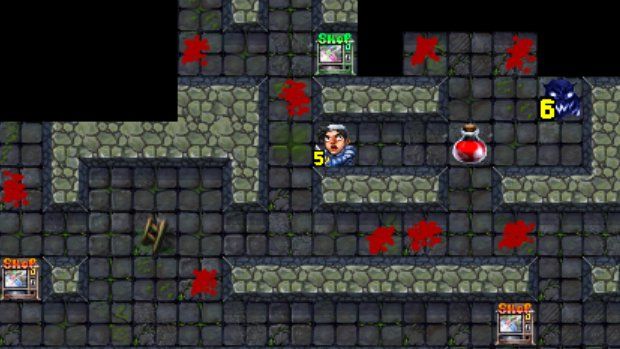 For the uninitiated, Desktop Dungeons may sound like a generic dungeon crawler, but it is far from that. While it does involve delving into dungeons, slaying monsters, collecting loot, and (hopefully) defeating the boss in order to emerge victorious, it plays out more like a puzzle game than anything else.

Upon beginning a dungeon, most of the play area is hidden under a black shroud, with each space being uncovered when the hero moves adjacent to it. Underneath the fog of war, heroes can find money, spells, equipment, potions, shops, altars, and of course, monsters. By uncovering map tiles, the hero recovers health and mana, and injured monsters recover health. Though it sounds like a simple idea, this recovery-via-exploration is one of the central mechanics that drives Desktop Dungeons.

It immediately sets up a risk/reward scenario that persists throughout any given dungeon: do you explore everything now in hopes of finding a key item or low level enemy to farm experience from, or do you save the exploration for later when you are inevitably hurting from a high-level monster? There is often a correct answer to that question but it is not always the same; it takes a lot of experience and a little luck to get it right.

The other seemingly simple mechanic that becomes crucial in tackling a dungeon is that gaining a level causes the hero to restore all health and mana, and also recover from any negative status effects. Paired with the aforementioned exploration, each decision is made critical in solving the problems presented. For instance, attacking a snake causes the hero to be poisoned, negating health recovery via exploration; attacking a snake and gaining enough experience from the battle to increment in level negates poison immediately. This is but one of the many pieces to consider when putting together the puzzle of a successful dungeon run.

Being successful in Desktop Dungeons is difficult, sometimes painfully so. However, another strength of the title is its quick nature. A single dungeon run takes about fifteen minutes to complete, even for more pensive players. Though defeat runs rife, each loss is short-lived and the promise of future victory is often too tempting to resist. I have told myself “just one more run” more times than I’m willing to admit. 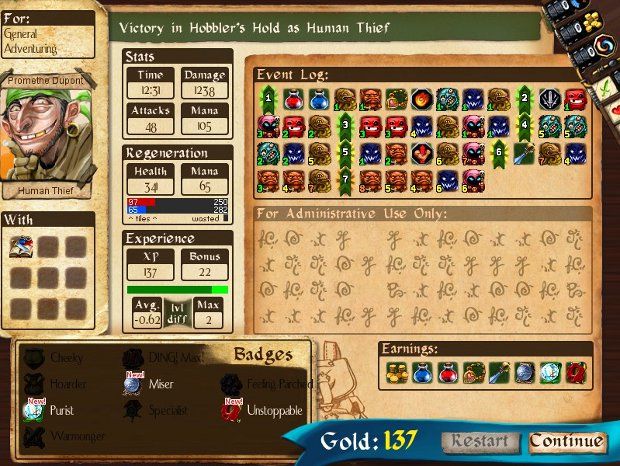 Though each delve is discrete from the next, there is a bit of persistence throughout a campaign. Gold collected and unspent in a dungeon is banked, and while it is not spent at shops in future dungeon attempts, it can be used to upgrade the kingdom, unlocking new races, classes, items, and dungeons. Items found in dungeons can also be saved in a limited capacity, to be purchased on the outset of a new dungeon.

There is a number of playable classes, and each can be combined with the selection of playable races, creating several unique combinations of heroes that each play very differently from one another. At the outset, only a few races and classes are available, with the rest unlockable by completing certain objectives. 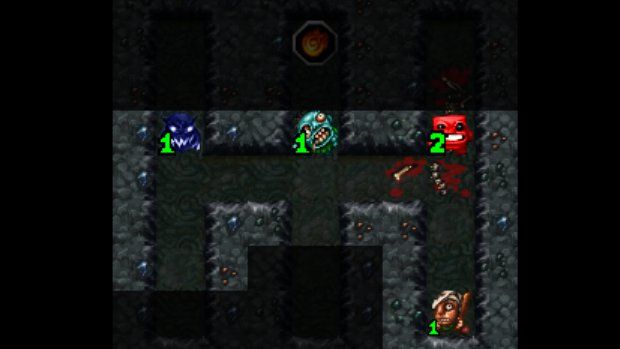 Offsetting the boosts that persistence offers to the standard dungeons is the introduction of true puzzle dungeons. Unlike the main dungeons, these are not randomized, and are generally much smaller than regular dungeons, with everything visible initially. Players are assigned a particular race and class, cannot bring extra items in, and must use every available trick to find what is often the one and only solution. Having all of the dungeon’s information available at once is a boon, but it is countered by the devious difficulty in achieving the perfection required.

Graphically, Desktop Dungeons has seen an enormous improvement from its beginnings. Despite the size restriction, the sprites are detailed enough to not only convey necessary meaning but also feature a unique style. Though I would not go so far as to call the game beautiful, it is far removed from its ugly past. The soundtrack has also seen a substantial upgrade for the full release. Tracks from Danny Baranowsky and Grant Kirkhope effectively capture the medieval fantasy setting, but are perhaps less memorable than some of their previous works.

All in all, the full release of Desktop Dungeons is great. QCF Design had a fantastic core game built years ago, and it holds up today, especially with the added bells and whistles. Despite its generic title, there really is nothing else like the dungeon-puzzling found here. Rather than being satisfied with the simple, unique game that it was, the developers went above and beyond adding polish, resulting in a game that is truly remarkable.