Certain genres more than others can be forgiven when skimping on narrative. I would argue that tower defense games can readily get away this without receiving many complaints, since the act of massacring enemy troops tends to keep us distracted.

Independent tower-defense/RPG mash-up Defender’s Quest: Valley of the Forgotten does an admirable job of telling a story worth caring about. And if you’re in it purely for the strategy and game mechanics, hey, that’s fine too.

Having been left for dead in a land overrun by a terrible plague, you awaken to find yourself in the Pit. Fittingly, this is where the afflicted are sent. Those not immune to the sickness eventually turn into savage creatures who hunt down the living together as a hive mind led by a powerful being.

These plagued beasts aren’t so easily fought, but thankfully, you have the ability to bring yourself and allies into a world halfway between this and the next where the infected can be killed. That’s the gist of the story in Defender’s Quest, which is told through dialogue in and outside of skirmishes.

It’s a solid setup — one that helps to rationalize many of this genre’s oddities. Rather than have “towers,” you have party members that you place on the map. They act like you’d expect — there’s a certain attack range, you can spend dropped energy to upgrade them, etc. — but outside of battles, it’s as if you’re playing an RPG. 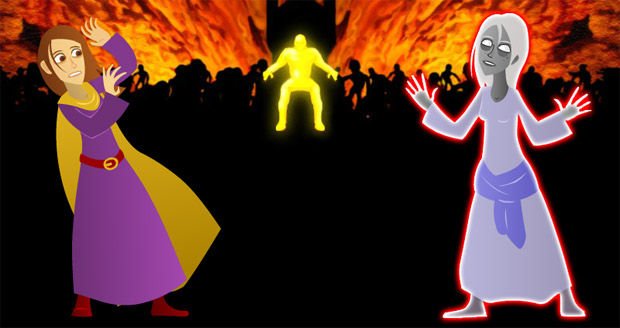 Characters gain permanent experience which can be put toward skill trees. When recruiting more of them from towns, you can customize their appearances, and there’s weapons and armor to buy as well. This is about as deep it goes, which was fine by me. The end result is a cast you’re somewhat attached to and an incentive to replay levels for the sake of grinding. Surprisingly, the level-to-level difficulty is quite balanced despite all of these extra moving parts.

On top of your crew, which is made up of six distinct archetypes, you’re able to stop onward-marching foes with spells. One serves as a bomb, another sets foes ablaze, and a third temporarily increases the damage your defenses can dish out. I specifically bring this up because spells help to get you, the player, more directly involved with what’s happening on screen. No time to doze off!

On that note, you’re also given a tremendous amount of control when it comes to the game’s speed. You can pause everything — while miraculously still being able to place units and upgrade them — or pump the speed all the way up to 4x. Defender’s Quest is very respectful of the player in this and a number of other aspects.

Controls and hotkeys are configurable, cut scenes and conversations can be skipped (and rewatched later if you so choose), and the rate at which experience is earned can be increased. The developers put thought into the little touches and it makes all the difference. 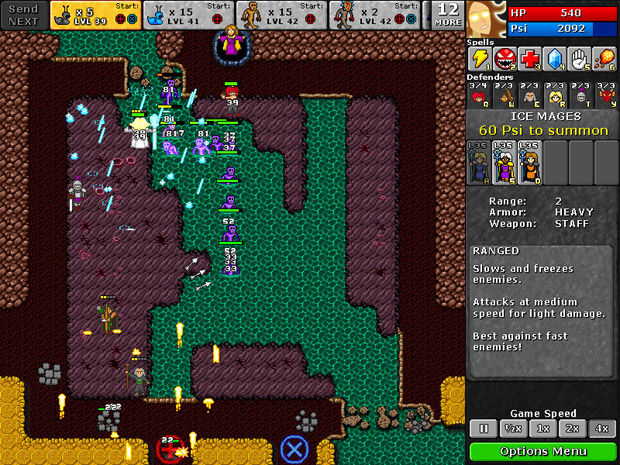 There are around 30 levels to survive, but in practice, it’s actually much more than that. You can go back and try to beat maps on harder difficulties. (The range is Casual, Normal, Advanced, and Extreme.) Doing so throws a tougher, more varied group of enemies at you and offers greater XP and loot. Between this and the bonuses for beating levels without taking damage, Defender’s Quest is deceptively long.

That said, you can get to the end on Normal in a good five hours or less. Personally, I’ve spent more than 12 hours going back to complete perfect runs on every stage. There’s plenty of optional content if you’re looking to get the most out of your money.

The difficulty never really gets frustrating, though it can be challenging until you figure out the ideal unit placements for individual maps. Again, if you get stuck, you can always go back to an earlier level on a higher difficulty to earn experience. I strongly dislike grinding in most games, but since you can easily speed up battles here, it’s relatively painless. 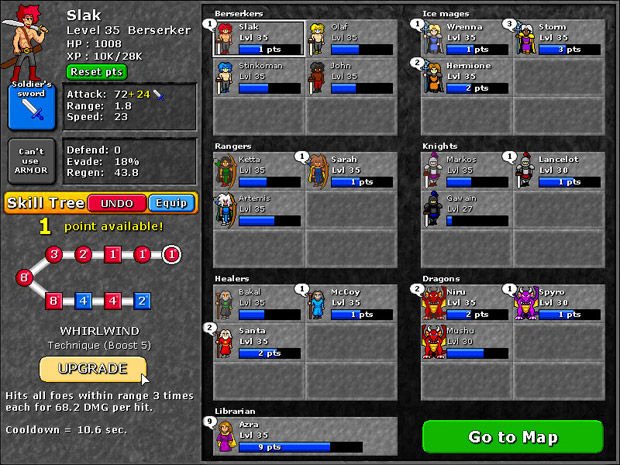 Defender’s Quest looks like an independent game, but don’t let that be the reason you pass it by. The art, particularly that of the cut scenes, is easily the worst part of the experience. Trust me, the mechanics and even the soundtrack, which is at the very least fitting for the old-school aesthetic, more than make up for it. I have very few complaints outside of this area.

It would have been nice to have greater variety in terms of locations and enemies. More meaningful items and the option to rewind time so you don’t have to start over and set everything back up again would’ve also been appreciated. But really, these are minor complaints.

It’s no accident that Defender’s Quest is incredibly fun to play. The team behind it clearly had an appreciation for the genre and knew how to offer something familiar yet fresh. The promise of free content updates has me excited to continue playing. You should strongly consider joining me.