Deep Black is a third-person shooter that feels like Dead Space, Halo, Gears of War, and Call of Duty all got together and produced a mutant offspring. Frankenstein’s monster comes closer to being a part of humanity than this game comes to being playable, or fun.

It attempts to be a half-on-land, half-underwater shooter that offers unique gameplay, but in the end, Deep Black is just half-baked. 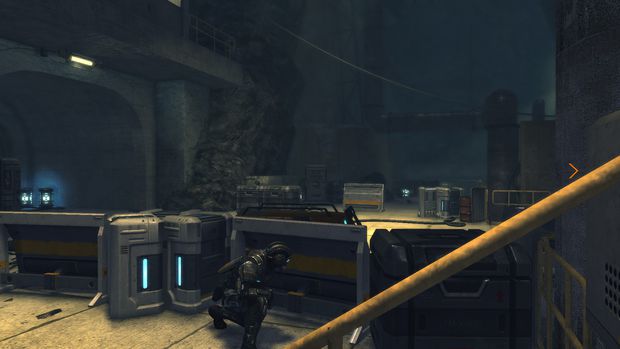 Deep Black’s major selling point is its underwater levels. While it’s true that there really aren’t any other games that use a lot of underwater play, they really aren’t used that well here. It always feels like the same thing over and over again. Swim underwater towards a goal, shoot some robot mines that want to kill you, flip a switch to open a gate, run up on land, hit another switch, go back underwater, and repeat until you’re bored silly.

Navigating underwater can be a major pain as well. Mines float towards you and explode, and destroying them before they kill you is almost impossible on the first try. Only after they have surprise-murdered you at least once can you attempt to learn where they are and shoot them before they do it again.

The levels above ground aren’t any better. Getting past any mission is a matter of dying and repeating the level until you have learned where every enemy is and how to defeat them, and since the checkpoints are really spread out, this can take a long time. It’s often necessary to replay the same sections upwards of a dozen times to successfully get to the next checkpoint.

The checkpoints are spaced out way too far, and even worse, they are often placed before cut scenes. As a result, there is nothing gratifying about getting past a combat encounter, since it feels more like beating the game’s bad mechanics instead of fighting the enemies within the game. 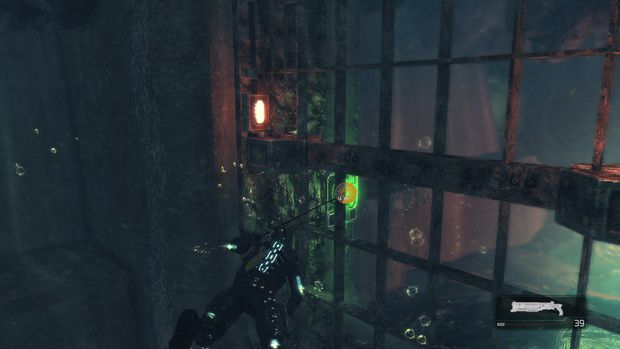 There are over forty missions in Deep Black, and every level feels almost exactly the same. Every crate looks the same, every hallway has the same enemies that run at you, and every encounter is a repetitious chore. New enemies are introduced too slowly and they are too similar to existing ones. There are only a handful of guns available to the player, and they don’t really respond differently.

Even when simply using up all the ammo in gun type 1 and switching to gun type 2, it doesn’t affect the feel of combat at all. There is a “super weapon” that you find, and it’s supposed to freeze guys and kill them. However, while they do freeze for just a second, they don’t die unless you hit them multiple times. It’s just as easy to kill them with a machine gun or the wimpy pistol that has endless ammo.

Moreover, the guns lack weight and believability. Shooting someone in the face doesn’t always mean that they’ll die, and enemies soak up bullets like sponges soak up water. They simply don’t die. Shooting someone in the head with a shotgun less than ten feet away should kill them, but sometimes these morons don’t even flinch. And it’s not like the shot is missing them since the impact is visible; they just don’t seem to mind being shot. 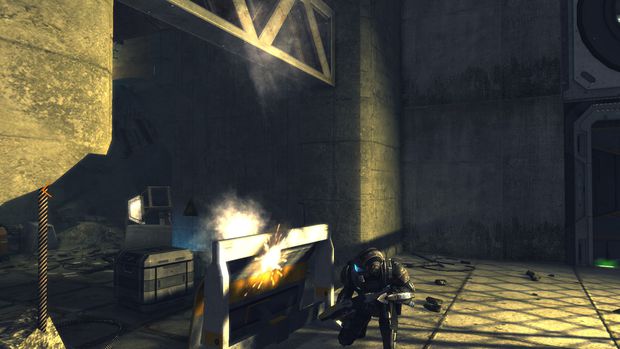 Boss battles are trials of patience and screwing around with mechanics that don’t make any sense. One boss sits in a pit in the middle of the room, and in order to hit the switches required to lower its shields and damage it, you have to roll around the room. I don’t mean rolling from cover to cover, or rolling to avoid certain attacks, I mean constantly rolling around the room like a ball. I’m sure that’s how a real marine would do it.

The idiot robot that can’t crawl up from this six-inch deep pit apparently can’t hit anything if it’s rolling around like a Katamari. That is, until its health is about halfway down, when it can start to hit everything it fires at. This often leads to player death about five minutes into the encounter, and because there are no checkpoints at different stages of the boss fight, you’ll have to start all over again. After doing this for about an hour, blind luck will eventually win and the boss will die. 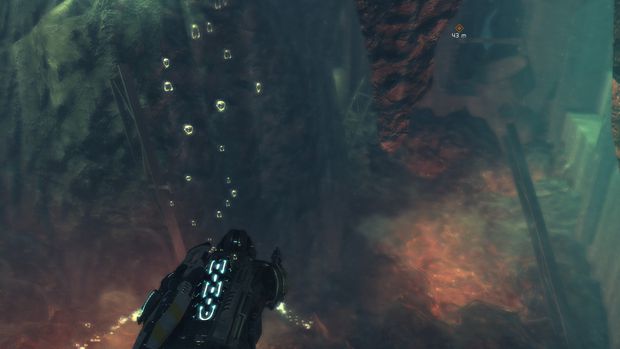 As bad as the combat is, the joke of a “story” is somehow worse. It’s hard to tell what’s really happening or why. The setting is bland and it doesn’t help that the level environments all look the same. There isn’t a solid antagonist at any point, and it’s unclear what the goal is. The hero is a generic lieutenant that wants to be like Master Chief, but he has no personality, so he can’t.

There’s also a talking Cortana-like person who tells you where to go and says “affirmative” any time that Lt. Whats-his-face say something, or she talks about how nice her ass is. Some of the dialog is so bad it’s laughable. There’s an AI that talks like GlaDOS or the computer voice on the Enterprise, and it accuses you of violating her. Top that all off with voice acting that makes most commercials sound exciting, and you have a giant turd that makes Plan 9 From Outer Space seem Oscar worthy. 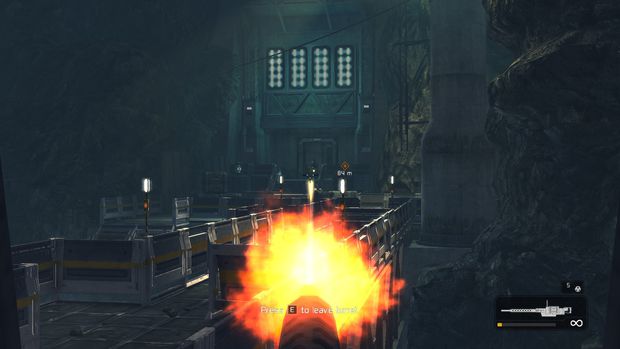 When it comes down to it, there really isn’t anything here to enjoy. It’s a collection of repetitive gameplay, bland levels, a horrible story with forgettable characters, and a poor system of checkpoints that forces you to keep replaying sections of the already tedious levels. The overall experience is mind-numbing and frustrating, making it hard to play it for more than 30 minutes at a time without wanting to throw something or burn things.

Just do yourself a favor and steer clear of this one. Even if you see it on sale for a dollar, just skip over it and play anything else instead.