It’s been a hell of a year for fans of indie games inspired by the all-time great Castlevania: Symphony of the Night and its ilk. I feel like I’ve been on a prolonged 2D action game bender.

While some of these titles are much more directly influenced than others, we’ve had Chasm, Dead Cells, and Guacamelee 2 back to back to back. None of those need an introduction, but one other game in the mix, Death’s Gambit, may warrant a refresher. It seems a little less visible than its peers.

I could quickly sum it up as “Castlevania Souls,” and that would get me most of the way there. Death’s Gambit puts a slight wrinkle on the well-established dark fantasy action-RPG formula. While it isn’t the technical or design marvel I was hoping for, it has some clever ideas and a ton of heart. 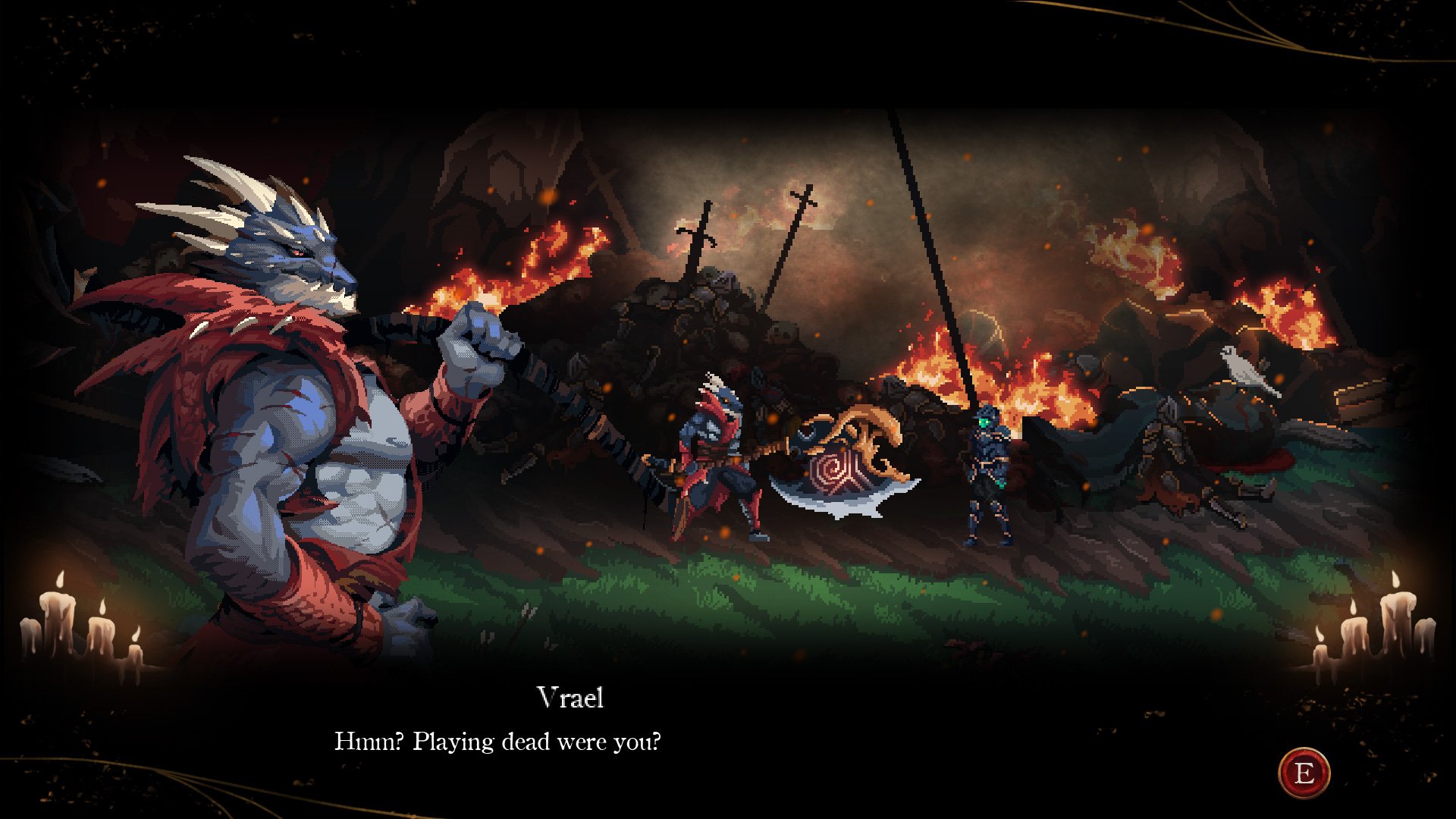 I love a good boss fight. Many of my favorite games reached that status in large part because of memorable, challenging, unique boss encounters. If Death’s Gambit does one thing right above all else, it’s that it pits you against worthy opponents. Unfortunately, a lot of little issues stack up over time.

You play as Sorun, a soldier who has risen from a fresh grave to serve Death in his war against the Immortals. You’ll start off picking a class, and while you can eventually level up the necessary stats to wield a tome instead of, say, a scythe, your choice does impact certain aspects like how you build up energy for special abilities. Assassins are meant to dodge, for instance, while soldiers will want to block. The class screen and accompanying stats will look immediately familiar to Souls players, as will the concept of a safe haven with unusual acquaintances and a non-linear world branching outward.

As things progress, Death’s Gambit starts showing originality with mechanical tweaks and a far more direct approach to storytelling. Here are a few novel ideas I dug. Instead of losing level-up currency when you die, you drop your healing item (which you can then go collect or simply pay to retrieve). When you fall to a boss, you’re rewarded based on how much HP you managed to carve off. If you’re feeling extra valiant, you can (reversibly) trade healing items for a direct buff to your damage. Finally — and this is the good stuff right here — you can rematch bosses. These “heroic” versions are significantly harder.

Death’s Gambit makes a good first impression, but it eventually unravels in both small and big ways. I can’t speak for every character class, but as a halberd-wielding Noble, I found the combat too stiff.

The game isn’t fast and fluid, which I think it should’ve been, but it also isn’t methodical. It sits in this strange middle ground. Between issues with deceptive hit detection, interruptions, slow healing, attacks lacking feedback, and questionable control mapping, Death’s Gambit misses more than a few marks. You can brute force your way past these and other frustrations by grinding, and thank goodness for that, but it’s a shame. For as cool as Sorun frequently looks, I didn’t always feel cool playing as him.

Now, that’s not to say combat is awful. It’s largely tolerable. I settled into an assertive playstyle that made the most of my abilities, one of which lets me leap off-screen for a couple seconds before crashing back down. I figured out how best to manage my cooldowns, when to go ham, and when to play it ridiculously safe. I made it work. That said, I can’t help but imagine how over the moon I’d be with Death’s Gambit if it weren’t so fiddly. It’s a testament to the world building, character art, gorgeous soundtrack, satisfying progression, and varied bosses that I put up with all those pesky quirks.

Speaking of which, Death’s Gambit has a tendency to crash on PlayStation 4. Even if I never lost much progress from crashes, it’s always unfortunate to be ripped out of the experience. For one specific room, I had to change my PS4 Pro’s output from 4K to 1080p to get past a game-breaking bug. These major technical problems feel emblematic of an across-the-board lack of polish and attention to detail. 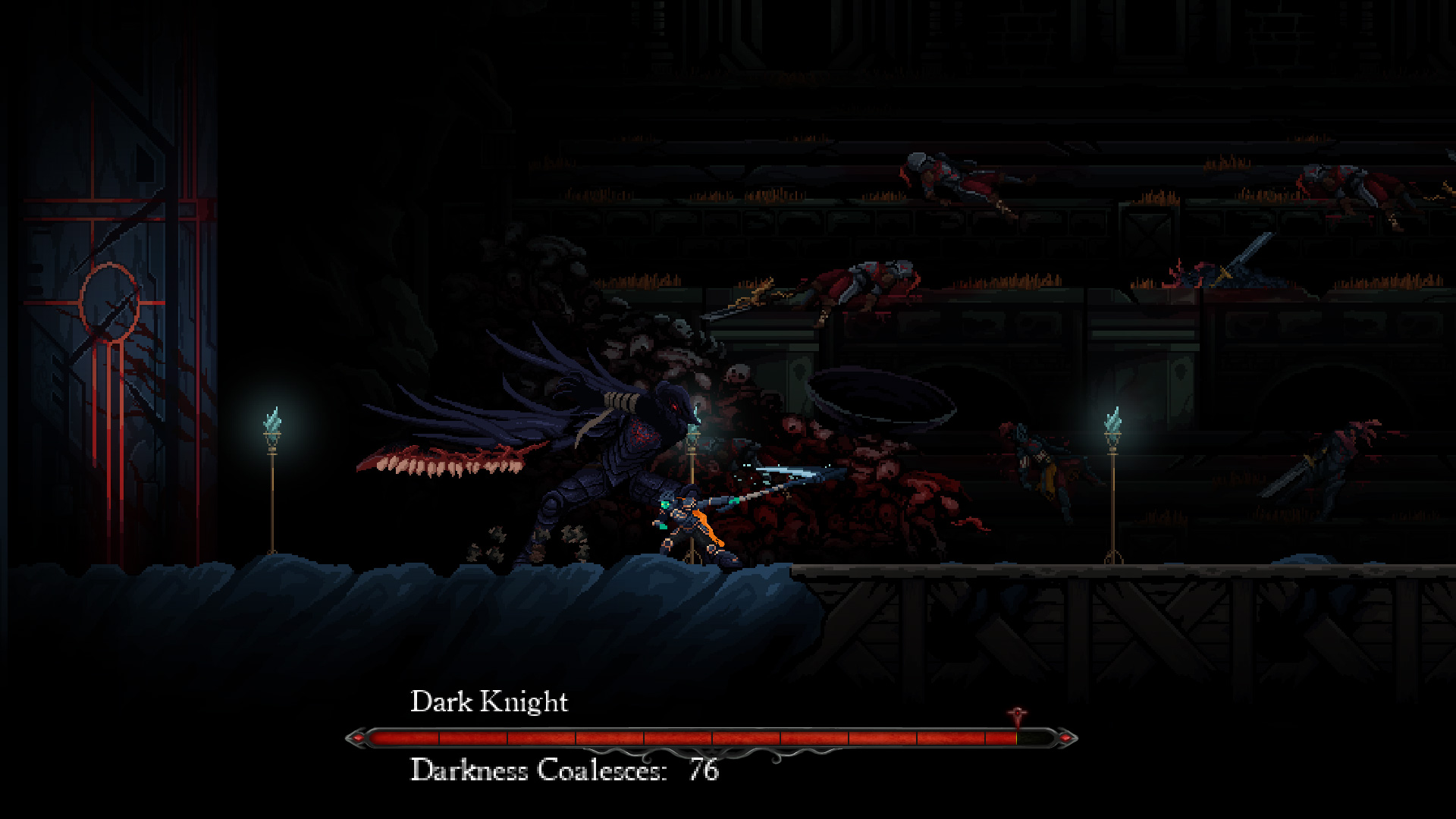 Skimming this review, it might sound like I didn’t have that good of a time with Death’s Gambit. I definitely have my fair share of complaints. But the thing is, once I got going, I couldn’t seem to stop. Despite clocking in something like eight or nine hours, I burned through the game from start to finish during a single day. I’ve since gone back to muck around in New Game+ mode. (It’s fine so far.)

In the end, Death’s Gambit resonates as a flawed gem, one I’m happy to have played. It’s an uneven experience bogged down by technical woes and stilted combat, but if you can enjoy less-than-pristine games in spite of rough spots, it’s worth taking a chance on. Just hold out for a few patches first.