Death Kiss is a weird movie. Not so much for its content, which is the grindhouse standard, but for its star’s uncanny resemblance to the late Charles Bronson. Perhaps stranger than using CGI to bring a dead actor to life, this impersonator is an Uncanny Valley body double only comparable to the legions of Bruce Lee doubles that flooded the film market directly following Lee’s death in 1973. The only difference is that Bronson has been dead for 15 years, and we’re not hurting for vigilante revenge movies.

A lone vigilante who goes by the initial K (Robert Bronzi) murders a wave of drug dealers and fiends in a number of lurid manners befitting a movie of Death Kiss‘s type. He shoots the dick off a pedophile, punches a drug mule in the stomach until he vomits to death, and ties up a biker in the woods and squirts him with barbecue sauce for the wolves to smell. The violence is cartoonish and fun, if uneven. Sometimes spouts of ridiculous blood douse a victim’s body in practical effects glory, other times the blood is ugly and digital, and every once in a while it’s not there at all.

To its benefit, Death Kiss moves briskly as K murders his way through the city’s underbelly, only breaking for periods of melodrama and shock jock radio rambling. 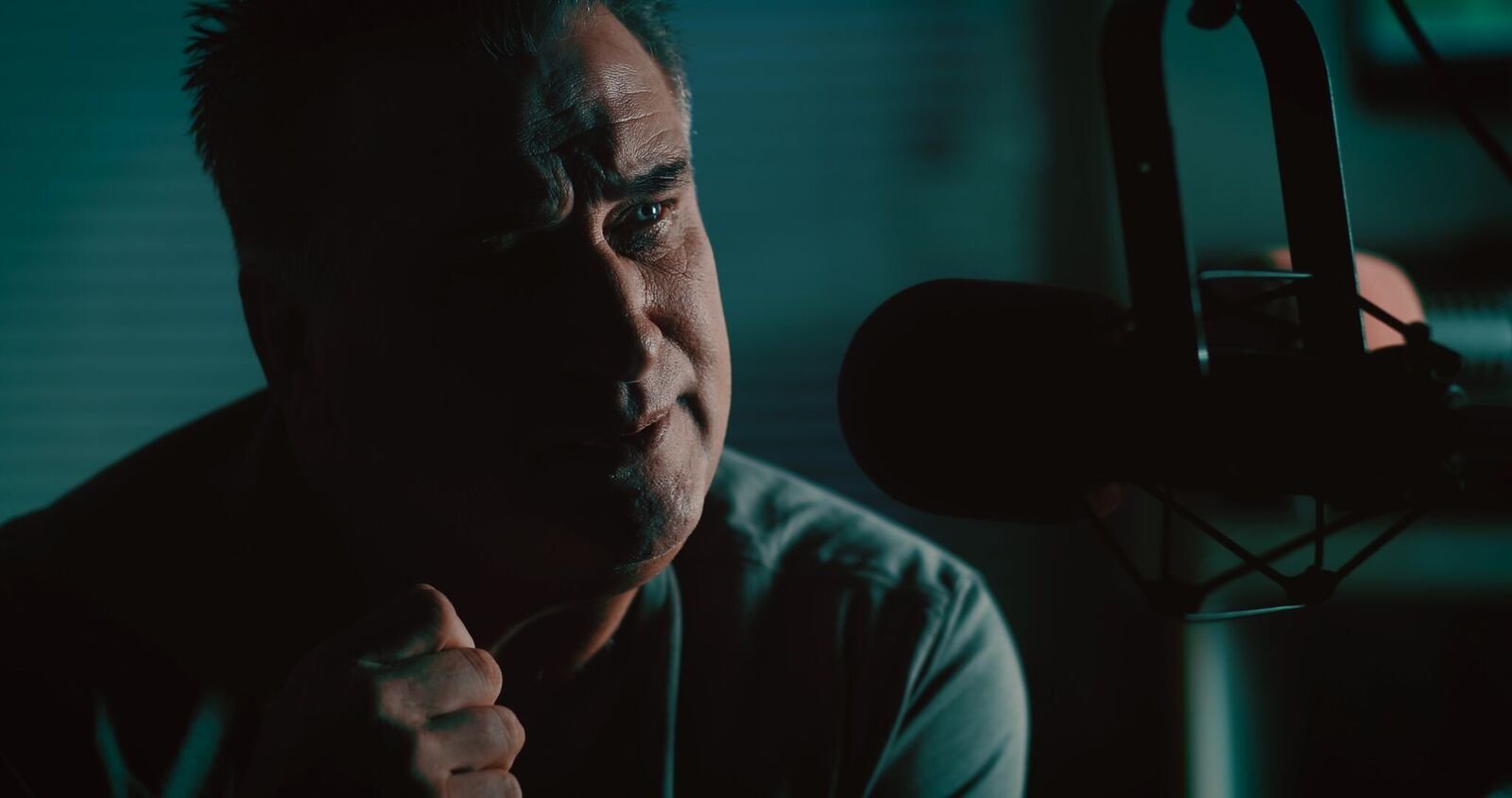 Speaking of which, do you want to hear Daniel Baldwin talk about an Aryan baby being shot in the face? That’s one of his many explanations for the morals behind K’s killings as radio host Dan Forthright, spouting drivel that questions why the police would take the time to give him a speeding ticket when drug dealers run free or why they would even bother with domestic abusers when child prostitution rings run rampant. For his part, Baldwin does deliver his monologues with fervor and energy and is very easy to hate, and he gives the best performance in the film. Not that he was fighting an uphill battle.

The worst actor is, unfortunately, Bronzi, all robot under a loose Bronson skin. He walks like the Terminator, rolls behind a car a few seconds after bullets are shot at him, and rotates his gun fixed to his hip like a turret. He lacks any shred of humanity or charisma, not so much as cracking a smirk through the entire film. It doesn’t help that all his lines are dubbed-over two-and-three-word phrases that often aren’t synced to his lips. 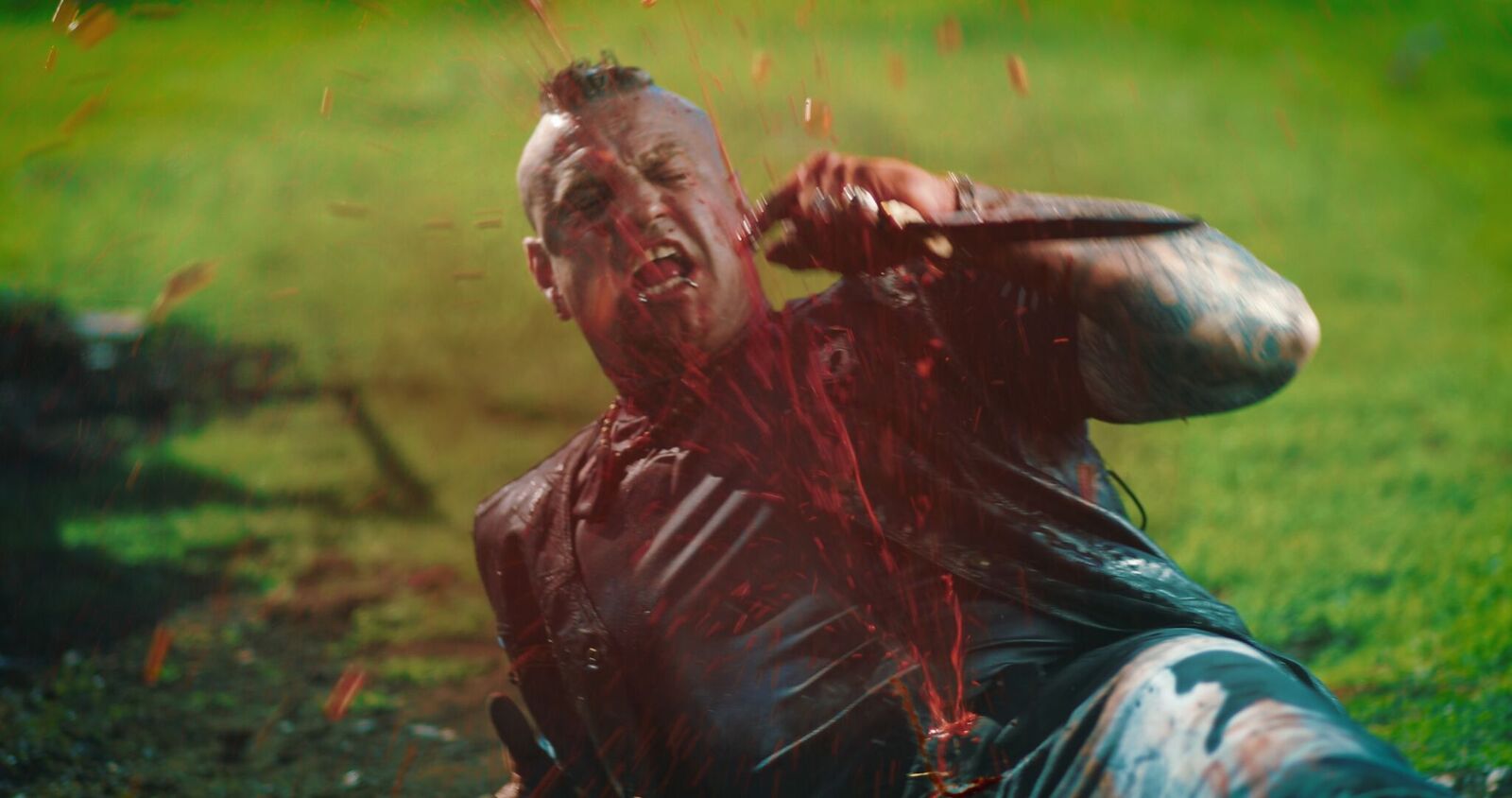 K robs the corpses of those he kills and sends that blood money to a mother and her wheelchair-bound daughter for reasons you could probably guess without even seeing the movie, and at one point the paralyzed girl’s mother delivers a full emotional monologue about how she’s a bad mother for taking her daughter along to her drug dealer’s house, and then the Bronsontron 3000 moves its lips and a second later a monotoned “An accident” emits from the speakers. And that’s that. Acting accomplished.

As far as imitations go, Death Kiss isn’t the worst. It’s at least entertaining, and the strange sensation of staring at this alien-created clone of Charles Bronson is interesting in its own right, but the film lacks any of the weight or pacing to match the original Death Wish and isn’t as kooky or absurd as some of the sequels. It’s what Marshmallow Mateys is to Lucky Charms. It doesn’t taste as good as the original and doesn’t do anything to stand on its own, but you’ll eat it.

It is better than Bruce Willis’s Death Wish, for whatever that’s worth.