As I finished Dear Esther, I felt nothing. There was no sense of revelation or tinge of intrigue. I wasn’t sad nor happy nor content. I felt no emotion at all. I wasn’t moved in the least, which is ironic given all that walking.

This is problematic because the purpose of this type of game is to tell a story and to evoke emotion. Dear Esther is more a loose narrative strung along in a setting that doesn’t feel thematically consistent with much else. It’s a series of locales that are shrouded in mystery, but that’s the extent of the connection. Dear Esther never ties these two necessary halves together in any meaningful way. 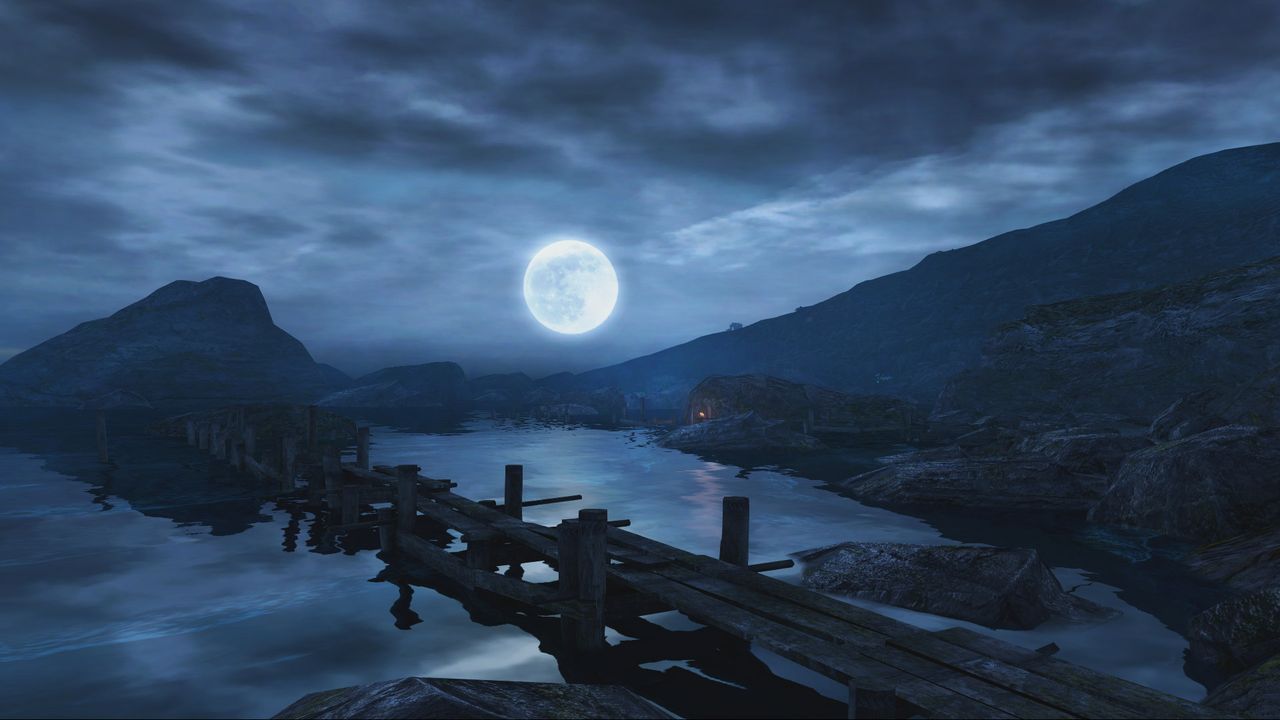 It may be easier to list what Dear Esther is missing rather than what it has. It’s set in an empty world that’s often devoid of any significant indication that it’s lived-in. Some places are stunningly gorgeous (the luminescent caves, particularly) and those locations can be a visual treat to traverse. But, the plodding movement speed combined with a number of dead-end paths mean that any sort of exploration is more of a chore than an incentive.

Most damning is the pace at which the narrative unfurls. Dear Esther makes a point to grant short snippets of dialogue every so often along the journey. These come along relatively infrequently when compared to the amount of walking in between, just enough so that you’ll find yourself wondering what that last message was. Compounding matters is the enigmatic tone that these lines are written in, usually making them exceptionally hard to parse.

While Dear Esther never quite figures out how to affix its story to its setting, the atmosphere is helped tremendously by Jessica Curry’s score. This is the unequivocal high-point of Dear Esther. This soundtrack shapes the moodiness of the jaunt, and transforms all the locations into far grander places than they’d be without it.

But, it’s not enough to be Dear Esther‘s saving grace. This is a game from 2012, and it’s clear that the genre has grown past it. Better examples like Gone Home are exploratory in nature and let the player discover their narratives through small but important details; Dear Esther just force-feeds a trickle of dialogue and then shrugs if you don’t get it. It’s the inferior way to present a story.

Still, some people will find meaning and depth in what Dear Esther delivers. I envy that. The linchpin of these games is to develop a connection with the player. Along with that connection comes emotion. Dear Esther is simply too disconnected from itself to ever connect with me.

Filed under... #The Chinese Room#Top Stories 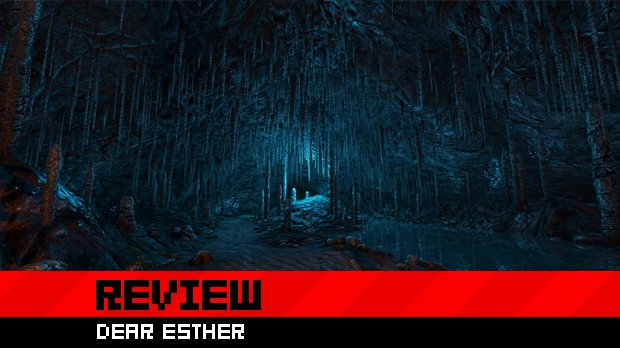 “Yes, but is this the right medium for that story?”

That’s the first thing they told me to ask myself in film school. It’s something not enough filmmakers ask themselves throughout their career. This is exponentially true for game designers, as evidenced by Half-Life 2 mod-turned-retail interactive-narrative Dear Esther.

As I kept my middle-finger glued down to the “W” key for the game’s duration (~70 mins), I kept asking myself if this story would have been better told through another medium. While I didn’t come to the conclusion easily, the answer is: yes, it would have.

Over the past couple years, the vernacular of our medium has been expanding and morphing to include new types of experiences. Some bold, some alienating, and almost all ill-fit for the medium they chose to cram their ideas into. I’m speaking of games and modifications such as The Path, Radiator, and past titles by Dear Esther developer thechineseroom (Conscientious Objector, Korsakovia). These developers take the experimental approach of European developers (Ice-Pick Lodge, Tale of Tales) to their logical extreme by stripping out most interaction, combat, and immediate threat. They are linear stories where you primarily progress through movement alone and the goal is to see the end. 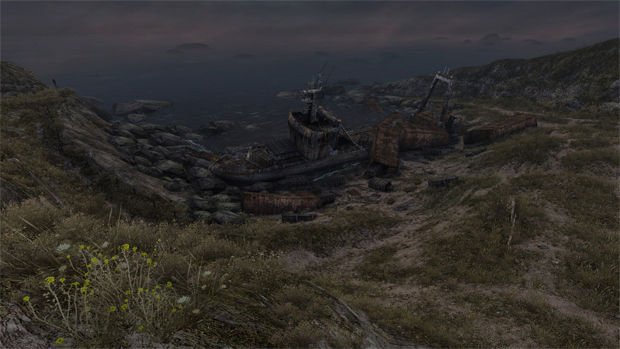 What made the original mod iteration of Dear Esther stand out in 2008 was its confident voice and style. The player starts off on a dimly lit shore, surrounded by billowing clouds of fog and mountains ascending in the distance. There is a flashing, red beacon far away. Videogame logic tells us this will be the end point of our journey, but don’t rely on that mental muscle too much. This isn’t a game in the traditional sense.

After taking a couple steps toward a sad looking cabin on the shore, our narrator starts an internal monologue complimented by powerful string music. You better get used to it, because Dear Esther only has three things going for it: its writing, music, and visuals. If you aren’t a fan of one of these things, you most likely will regret your time with the title. Luckily, two of these three are stellar and the writing is magnificent when it’s not bloated by artistic pretensions.

This isn’t Max Payne speaking. The voice of our protagonist is a much more literately informed, esoteric one. The vague, inconclusive narrative of the game is told through our narrator’s misplaced letters to Esther, a woman we know little about even by the end. At times, the narrator sums things up beautifully (“Infection is not simply of the flesh.”) 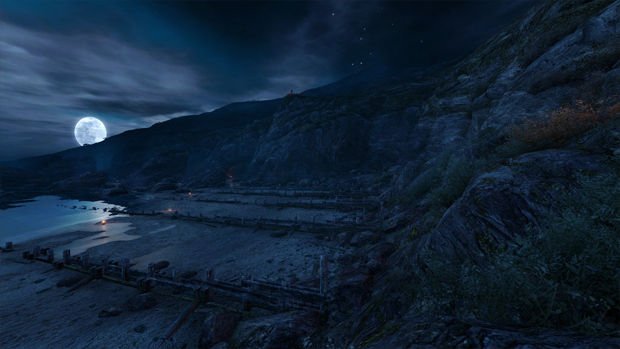 Other times, he barfs up lines that sound like bad Mars Volta lyrics (“Did this island rise from my stomach forcing the gulls to take flight?”) Even more difficult is the non-linear storytelling that jumps from biblical parables (ham-fisted late into the production) to feverish ramblings that are both fun and frustrating to decipher, especially when you are trying to read something written on a wall. Even when the words fall flat, voice actor Nigel Carrington makes them come alive with a rare spirit. He adds a weight to the syllables that make them sink into your gut.

The impact of Jessica Curry’s score on this project can’t be praised enough. Her music, from sweeping string movements in the pastoral scenes to her gloomy piano pieces in the caves, help paint the landscape with character. You feel like you are in a wonderful H.P. Lovecraft short story as you slowly traverse a hillside or dive deeper into a cave. It’s too bad then that for long sections the game is played in silence, tainting the illusion.

This 2012 commercial release, made possible through extra funds and the help of former DICE employee Robert Briscoe, is the same game as before just with better production values. Judging by the comparison image below, you can see how much of an effect this made. While the audio brought the story to life in the mod, the rebuffed imagery complete the vision in this retail remake. The beginning landscapes are expansive at the cost of appearing a bit too ordinary, but the artistry put into the cave section in the narrative’s 2nd act is astounding. Dear Esther is one of the most beautiful games I’ve ever played at points, overcoming any sense of dullness the rest of the experience put me through. 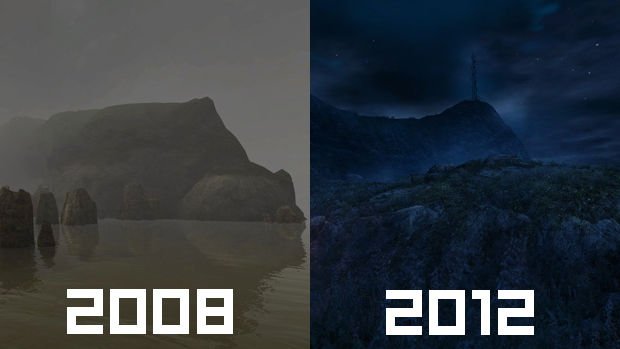 So, yes, this game is dull. And, yes, it is a game. There are rules and keys and narrative triggers and all those things we come to expect of a $9.99 purchase on Steam. The problem with Dear Esther is that it never uses its resources as interactive-fiction to good effect.

Let’s break this down to its basics: What does the story gain from being interactive?

For one, you can explore this world with your own eyes. You can also explore parts that aren’t worth exploring: Pathways that lead nowhere, caves with the same assets copy-and-pasted, and dead-ends that will make you curse the game’s painfully snail-paced walking speed.

Another possible benefit is that you are in control of the action, yet Dear Esther doesn’t seem to respect the player very much in this regard. All you do in this game is walk. You literally hold down the “W”-key for 70 minutes — even ducking, the only other action, is automatic. At one point, my finger became so tired that I mapped the “Forward”-command to my right-mouse button. A “move forward forever”-button, as found in many MMORPGS, would be appreciated. If the developer sarcastically respond, “While we’re at it, we’ll just make it a Machinima!” I’d say, “Good!”

The bigger problem with Dear Esther is that it revolves entirely around moving forward without providing any momentum, incentive, or even a clear path (at times). The most thrilling moments are when you take a plunge into an abyss, trusting the narrator for his word. Yet, games like Uncharted 3, Gravity Bone, and The Stanley Parable offer so much more variety in action and movement in their non-combat-based narrative moments. Dear Esther could have been thrilling, but instead it feels lazy. When you spend 10 minutes walking, hit a dead-end, and walk 10 minutes back … well, that’s just amateur hour. 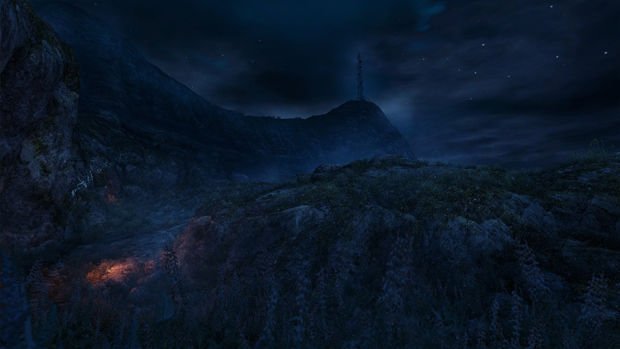 Arguments will be (and have been) made that the reality of getting lost is one shared by the player and narrator. That’s all fine and good but there is nothing that is interesting about that for me as a player. The frustration of being lost and the pain of holding down the “W”-key don’t make me sympathize with my avatar, they just make me more aware that I am playing a game in the real world and am feeling increasingly unhappy about this decision. The biggest insult of all is that the game ends with a scene that takes all player-control away for the sake of what?

Dear Esther is such a purely audio/visual experience that I have to conclude it would be better as a short film. It’d be a challenge to make, but it’s nothing that Chris Marker and Gus Van Sant haven’t successfully attempted. Regardless, I recommend playing Dear Esther in order to figure out where you stand on interactive experiences such as this. Dear Esther is such a bold, specific creation that it will help develop your taste and understanding of interaction-fiction. As a bonus, you’ll be treated to some occasional ear-and-eye candy.

Dear Esther is an experiment but it is a flawed one. I have to wonder, even if it were a short film, if its vague plot and predictable conclusion would be effective. The ironic thing is that the most pedestrian of stories can be convincing when coupled with intelligently applied interaction — something Dear Esther stubbornly stands against. It’s as if it wants to be a part of this wonderful medium of ours without asking itself why, which is exactly why you should seek it out and learn from its failures as a game enthusiast, critic, or developer.

So, that’s Allistair’s Interactive-Fiction 101. Now, which one of you students do I get to take home tonight?