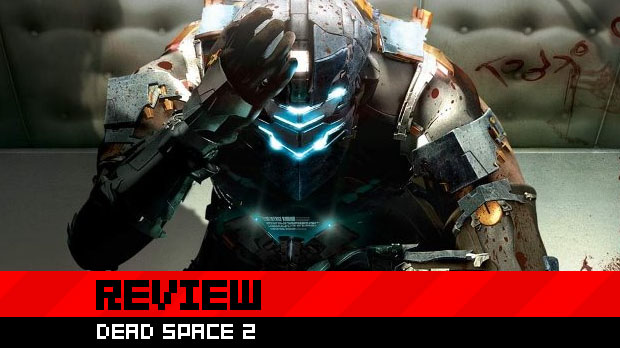 If one thing can be said of Visceral Games, it’s that the studio is true to its name. Visceral is a word that can adequately describe any of the team’s violent, blood-drenched titles, and nowhere is this more true than with the game that turned EA Redwood Shores into Visceral in the first place, Dead Space.

2008’s horrific, panic-inducing, limb-shredding action-horror title wasn’t just visceral, however. It was atmospheric, engrossing and polished. In short, not only would a sequel have to match the scares, it would have to match the quality. Not an easy thing to do in the least, especially if you then try to top what came before.

Yet by jove, they did it. 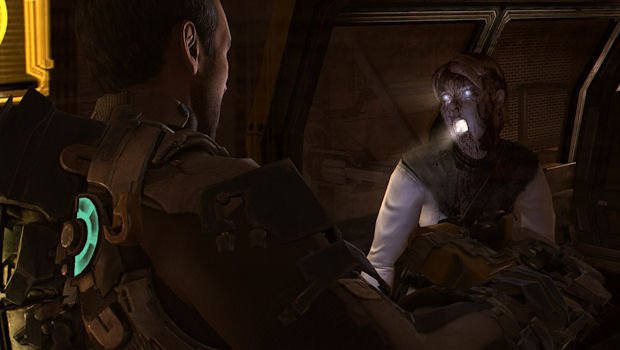 Considered insane and incarcerated in a city-like space station known as The Sprawl, Dead Space protagonist Isaac Clarke is still haunted by visions of his dead ladyfriend Nicole, while unsympathetic doctors prod and poke at his brain. Of course, if that were all that happened, it’d be a pretty dull game, so along come the Necromorphs to carve people up and give Isaac something to do. Better than getting molested by an amorous psychiatrist … or is it?

Dead Space 2‘s narrative is richer and more integral to the experience this time around, helped in no small part by the fact that Isaac is no longer a silent protagonist. This sudden introduction of vocal chords could easily have been the ruination of Dead Space 2‘s narrative, but the change has been made gracefully and tastefully, with a character who still keeps his words minimal but becomes much more sympathetic. The final few chapters of Dead Space 2 in particular forge Isaac into a sympathetic character, one who deserves pity and respect in equal measure.

The plot, which I shan’t detail for obvious reasons, is driven forth by some superb voice acting from all corners, along with an expertly crafted script. It’s hard to find naturalistic dialog in a videogame, but Dead Space 2 manages it. The only downside is that, for some reason, the voices are buried deep in the overall sound mix, with music and sound effects disproportionately loud. 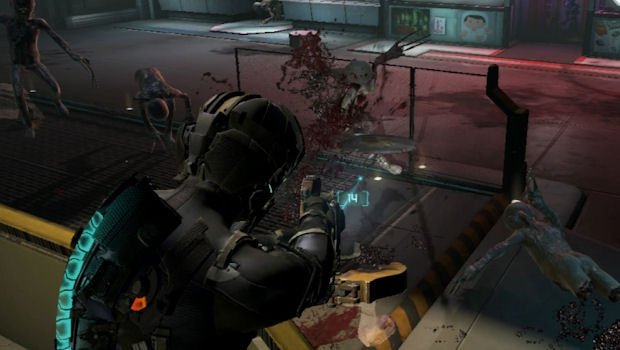 This is especially frustrating during important exposition scenes featuring Nicole, where distorted voice effects and loud atmospheric sounds combine to make certain characters borderline unintelligible. The sound quality, especially the ambient noise, is superb, but you’ll have to really mess with your audio settings if you don’t want to miss plot details.

When you’re not straining your ears to pick up the chat, however, Dead Space 2‘s quality is utterly astounding. Aside from the occasional physics glitch (the bane of all ragdoll-flavored games), Visceral’s latest effort is one that smacks of perfectionism on the part of the studio. No mistakes were made with this game, and it’s clear that it has been crafted with genuine love and respect, which is an increasingly valuable trait in videogames these days.

The core gameplay remains the same, and you’ll know exactly what to do if you played the first game. Isaac makes his way through The Sprawl, utilizing his handy Plasma Cutter to slice the limbs off hordes of Necromorphs. Business as usual.

Visceral didn’t buy a new car with Dead Space 2, but it did soup up the motor. The cheap scares are cheaper and scarier, the Necromorphs hit harder, move faster, and come in a variety of increasingly disturbing designs. Chief among the twisted monstrosities are the mutated children, who run screaming at Isaac in huge groups and are easily among the most unsettling monsters in videogame history. Few games let you shoot the mutated corpses of slaughtered infants, and that’s an accolade Visceral can be proud of. 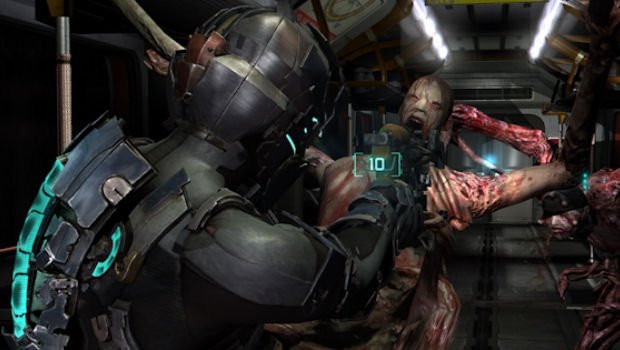 Dead Space 2, like its predecessor, is less about psychological, creeping terror and more about cheap scares. While some will find this detrimental, I can’t help but relish the increasingly absurd ways in which Visceral attempts to make you jump. The game is relentless in this respect, as Necromorphs lunge at you from every corner, things burst and shatter all around you, and windows crack open, threatening to suck you out into the vacuum of space if you can’t shoot the emergency shutter down in time. And it’s all such mindless fun that you barely question the architectural sanity of putting glass windows in a space station.

For all its attempts to craft a creepy story and unnerving atmosphere, Dead Space 2 is at its best when it casts subtlety to the wind and throws wave after wave of Eldritch nasties at you, sowing panic at every given opportunity. The ability to induce this panic is the game’s biggest strength — a frantic environment where you feel outmatched and manage to survive by the skin of your teeth. Sometimes it can get frustrating — it’s not fun to have three monsters in a row leap at you while you have no chance to defend yourself — but at the end of every fight, you’ll feel that special kind of stress, that good kind of stress where your heart’s racing and you feel like you just pulled off a superhuman feat of survivalism.

Visceral spent a lot of time making weapons more effective, dealing extra damage, and having more customization options. There are also a few new items, like a long-range rifle and a mine launcher. However, these new weapons still aren’t as effective as the standby Plasma Cutter, with perhaps a Pulse Rifle on the side for quick crowd clearance. It’s both a strength and a weakness that the starting weapon is still the most powerful in the game. The limb-shredding precision of the Plasma Cutter is wonderful, but you’re left with a choice — play without variety, or sacrifice your ability to fight efficiently in order to play with a flamethrower (as well as force more varied ammo drops, which leads to less ammo per weapon). Whichever way you play, your game will be dented just a tiny little bit. 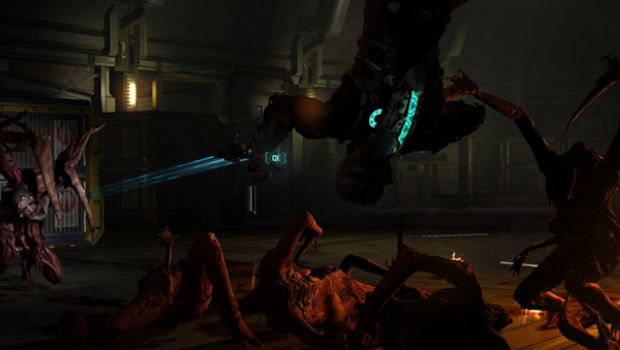 I’m also somewhat disappointed that The Sprawl isn’t … well … sprawling. While the environments are varied and you’ll be going to all sorts of unique locations, The Sprawl may as well be the Ishimura with some neon signs. Most of the game still takes place in tight corridors, and you never get a sense that you’re in a giant space city. The game’s opening chapters hint at all sorts of glorious chaos as the Necromorphs tear The Sprawl’s citizens apart, but it’s over pretty quickly, and the majority of the game just feels like another deserted, desolate spaceship.

That said, the game will throw some variety into the mix at regular intervals. An early chapter set on a speeding train makes for a total thrill ride, especially with its ludicrously intense ending. There’s also a chapter set in an elementary school, and you can probably guess how harrowing that is. The new anti-gravity areas are also pretty fantastic, especially with Isaac now able to freely float around the space rather than simply stick to walls. Some latter chapters take Isaac out into Space, and these rare, open moments manage to create the illusion of a far bigger world.

The single-player campaign clocks in at around eight hours, and like its predecessor, it feels right for the game to end when it ends. The story, though still light on narrative details, is beautifully interwoven and helps make Isaac into a truly endearing protagonist. His actions in the last two hours really flesh him out, and helps to create a more subtle, more human hero than we’re used to in videogames. There are few single-player experiences so perfectly paced as Dead Space 2‘s, and for that alone, the game is worth a purchase. 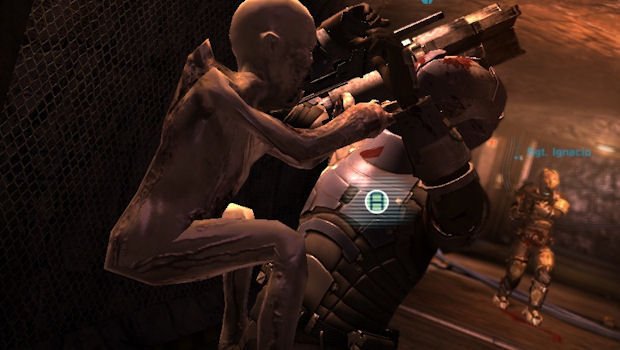 It’s a good thing that the single-player is still the game’s biggest draw, because the multiplayer is, to be fair, nowhere near as good. It’s not exactly bad, but it’s rather unsatisfying and delivers nothing of the pacing and tension that the main game brings. The teams are split into humans and Necromorphs, and while one would imagine that playing a Necromorph would be fun, it’s actually quite disappointing. Their attacks feel disconnected from the game, with wild hack n’ slash swings that never feel like they’re hitting anything and projectile attacks that are visually vague, giving no clue as to whether they struck their mark. It’s also just rather dull to spend five minutes spawning, running up to somebody, and smashing the trigger blindly in the hopes that you’ll kill something.

When playing as a human, the tightness of the story mode is there, but the atmosphere is all gone. Now the Necromorphs run around in circles, as online gamers are wont to do, and the unbridled chaos feels far less satisfying than the controlled madness of the tightly scripted single-player.

There is a bit of fun to be had, especially once you start ranking up and can customize your character a bit more with uniform colors and loadouts, but there’s nothing in Dead Space 2‘s multiplayer that wasn’t already done — and done better — in last year’s Singularity, which also featured a “humans vs. monsters” mode and did so with far more depth and in a tighter fashion. 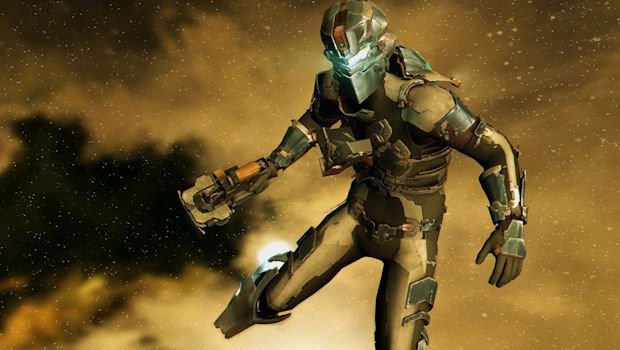 That said, Dead Space 2‘s somewhat tepid multiplayer does not drag the game down in any way, shape or form. The single-player campaign is so superb that even if the multiplayer was bad, it wouldn’t have taken anything away from the experience. The game already justifies its $60 asking price before it goes online, and if you happen to dig the multiplayer as well, that’s just icing on the cake. It feels like a bonus mode more than anything else, and the fact that it’s at least “okay” is more than enough.

Dead Space 2 is a ludicrously intense, graphically gorgeous, thoroughly atmospheric game that takes everything the first title did and ramps up the absurdity to dangerous levels. It’s cheesy to say that “if you liked the first game, you’ll love the sequel,” but in this case, I think that’s a very fair assessment. Dead Space 2 is Dead Space with the tuning at its finest and the scares at their most delicious.

Action horror has reached a new peak with Dead Space 2.