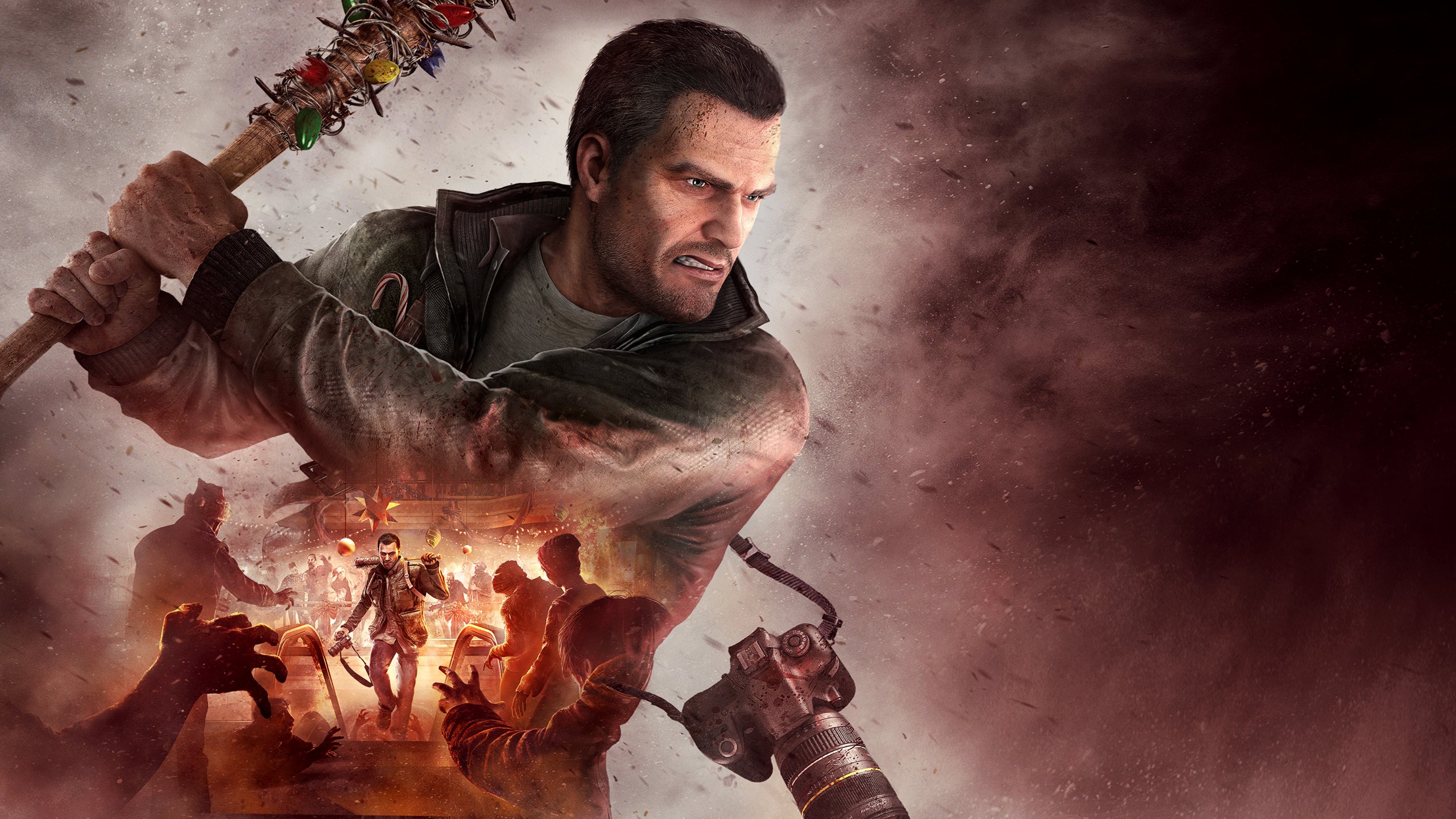 I actually enjoyed our break from Frank West.

Heading into uncharted territory with Chuck and Nick in the sequels was refreshing, and for a while, I thought that Capcom was going to create this giant shared universe with new faces over the course of my lifetime. But we all know nostalgia is a powerful drug (especially for a remake-happy publisher), and it’s bringing back the Tatsunoko vs. Capcom and Marvel 3 star once again, on top of the original setting of Willamette, Colorado.

I mean, Dead Rising 3 sold 2.1 million units to date, so it didn’t do half bad for something that was never released on PS4, but I get it. 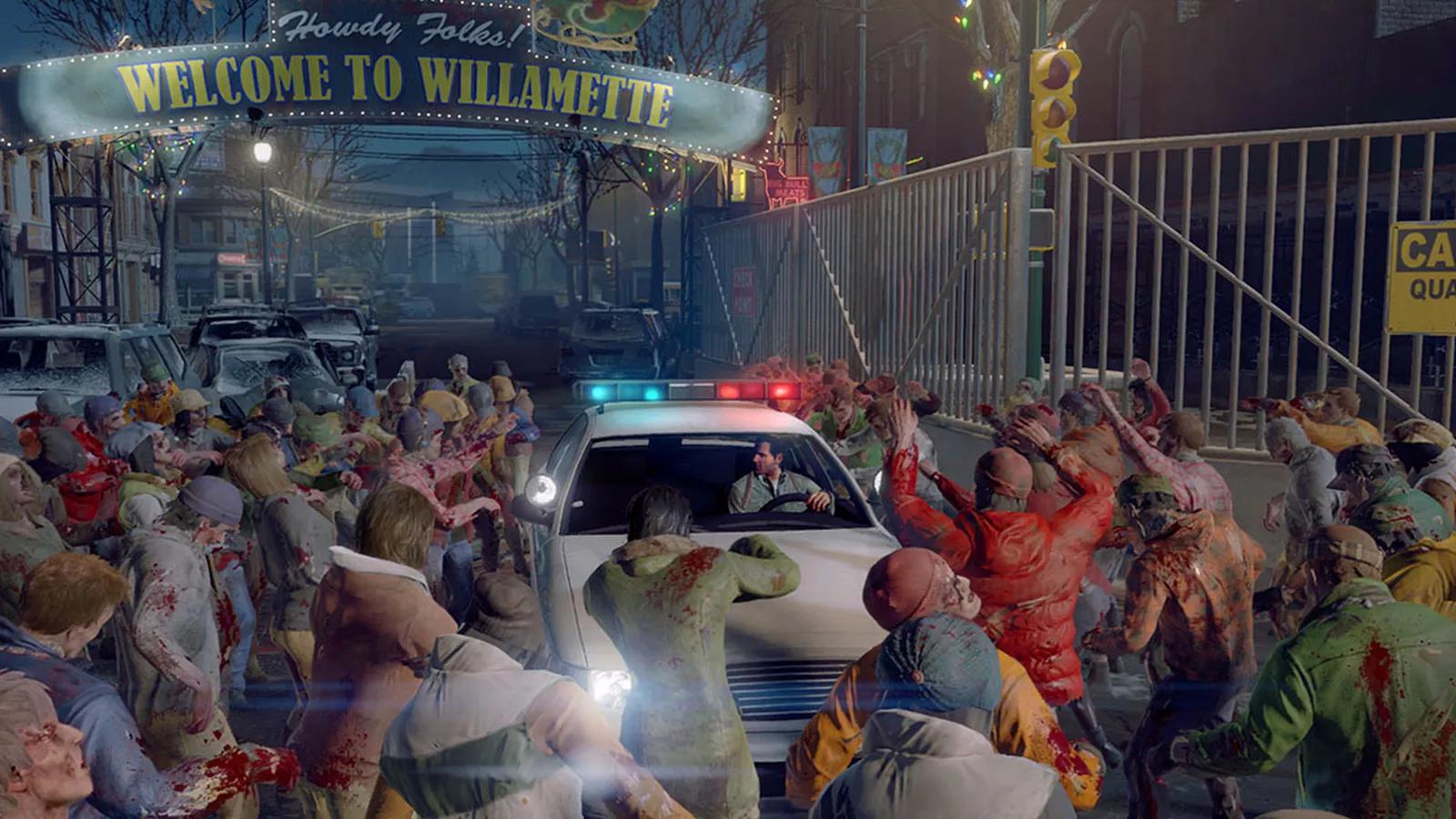 In case you’re wondering how they bring him back, Frank is drawn once again into the city of his nightmares because of a current student’s conspiracy theories (yeah, he’s a teacher now), which sparks an old investigative itch of his. Before they know it things go to shit, and zombies have overwhelmed the town once again. Did you expect more than that?

But before I delve into the nitty gritty, let’s just talk about the polish. The story is delivered through a mixture of comic book-like animation and in-game cutscenes, and the former are a great pulpy way to get people invested without feeling pretentious, barring an obvious “consumerism = zombie” hand-wringing with the Black Friday motif, wistfully juxtaposed to the fact that Dead Rising 4 is, in effect, a mass-market product. The setting is also a good icebreaker, as the entire playground of Willamette (the rural and city zones) is holiday themed. The mall itself is actually one of the best indoor locations I’ve ever seen, as it’s unconventional and lavish, almost like a theme park (or an equally lavish real-life Gaylord or Disney hotel).

Hearing “Dance of the Sugar Plum Fairy” during the pause menu with an accordion is full Dead Rising and the definition of a guilty pleasure. There really aren’t a lot of Christmas-themed video games, and although it does run the risk of overstaying its welcome during, say, the spring and summer seasons, I think this is something I’ll want to go back to every year to re-experience, even if it’s just for a few zombie beat-down sessions.

I actually dig the tone. There’s still silliness abound, but the voice acting and animations teeter on the edge of camp quite well while feeling like there was a concerted amount of effort put into it. I’m not sold on Frank, though. He kind of reminds me of a less interesting Ash Williams (of Evil Dead fame), a parallel that’s even more on point now that Frank is approaching the same age as the boomstick-toting unlikely badass (Ash is in his 50s in the new fantastic Starz show, while Frank is 52). Capcom Vancouver has noted that it was going for a more “grizzled, mature, older take” on Frank here, but also incorporate elements like getting bonus points for taking selfies next to corpses. I mean, you have Servbot costumes and giant mechsuits — just roll with it. Or better yet, just don’t have Frank.

And while some things stay the same, others change. I straight up do not like that the timer is gone in the main mode — there’s no way around it. For those who are unaware (or all too aware, and were turned off by it), the original games had a time table, where you had to do certain things or risk either failing missions (cases), or worse, deal with a game over screen. It was annoying in some cases and thrilling in others, as it encouraged multiple playthroughs to really see everything. Even then, you’d hear about something exciting weeks later that you never even knew existed, and were spurred into finding it yourself. That sense of discovery was partially what made the Souls series special,  before From Software helped make that concept a mainstay.

Plus, having an arcade mode in past games (yes, they existed) was a perfect way to indulge in doing whatever you wanted. It was an option that was always there, and taking away a large chunk of what makes Dead Rising, as a series, so interesting is a shame. The lack of story co-op and specific save points in this iteration I can forgive, but the removal of a timer takes away a lot of the suspense. Bringing back that timer in the upcoming Dead Rising 4: Frank Rising paid DLC (that’s also part of a Season Pass) is a sleazy move. 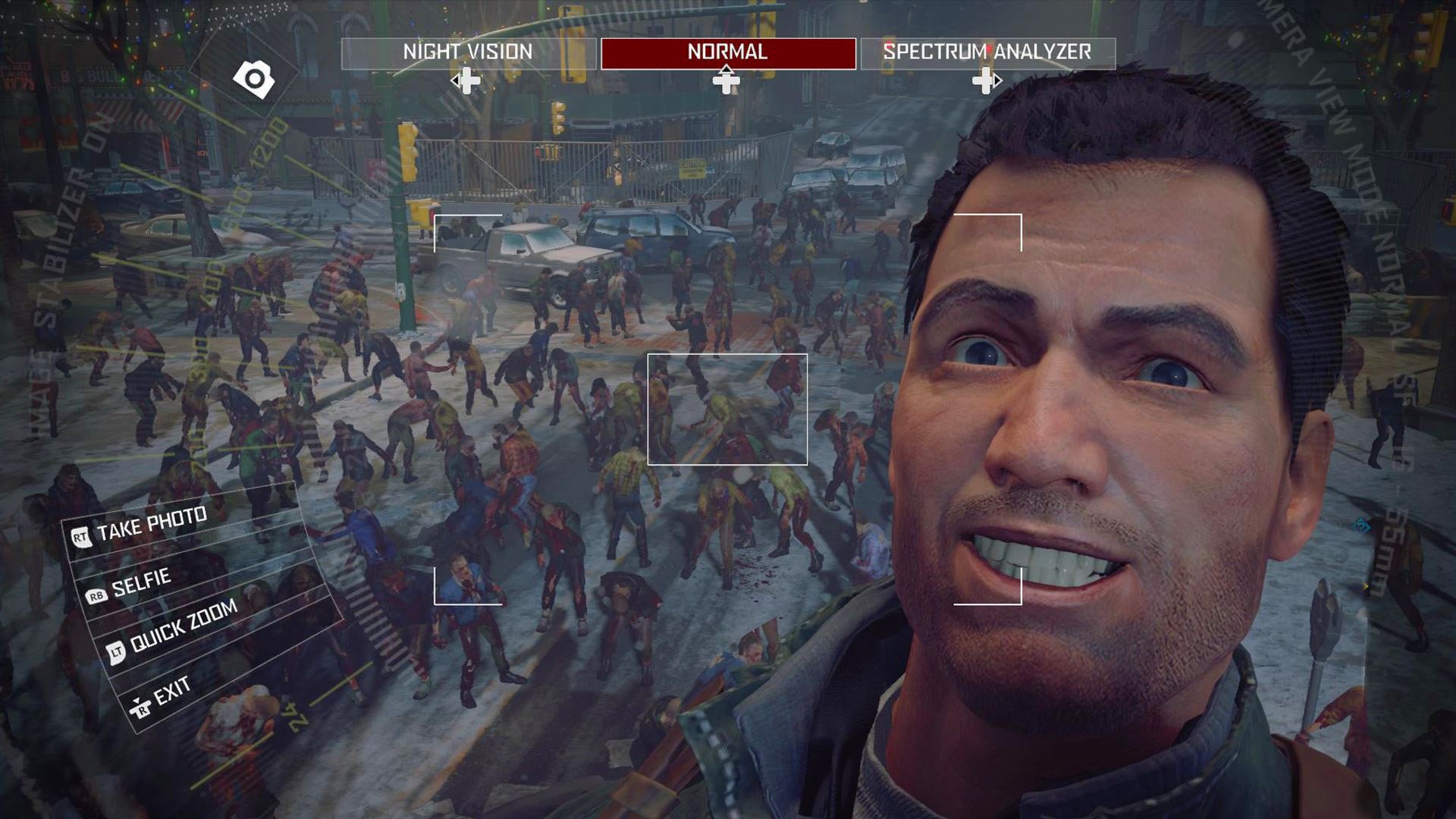 The inventory and crafting system have been simplified to turn Dead Rising more into a beat-’em-up, but it still retains the finite durability of items. It’s give and take. I’m into the instant crafting on the radial menu from the field, and the sheer amount of combo weapons and vehicles. It’s an excuse to pick up everything and stay out of the menus and in the action as you’re crafting right on the spot. But the side effect is that the new direction absolutely cripples healing items. Food is basically a health pack now instead of the elaborate mix-and-match cooking system of the past. It makes zero sense because there are also medkit items in the game, and to make matters worse, they don’t even have their own dedicated slots — they just show up as generic “+” symbols in your inventory (you start with two, and can unlock more).

What Capcom Vancouver has done is effectively gamified a lot of the natural elements that were present in the original. This is something that’s been done in bits and pieces in the sequels and spinoffs, but never fully realized until this iteration. It’s not that it’s bad, mind, just less special when it feels like something you’ve done a hundred times before in other games. If you didn’t like carrying five food items and one weapon just to survive in the past, you’ll probably like this system more. Or, you’ll forget about some shortcomings while you sprint down the city streets in an Exo Suit, ripping zombies in half as you stomp about.

But as off-kilter as the presentation is, there’s a lot to love. For one, the best thing about bringing Frank back, in turn, brings back the camera and photo-shoot mechanic. The concept of taking pictures in a first-person mode to earn experience is lifted wholesale from the first game (and Off the Record), but it still hasn’t gotten old, mostly because it doubles as an official photo mode that doesn’t have to be patched in months later. Selfies, as much as I dislike the practice in general, actually serve a purpose in granting you additional XP, and add to the thrill of taking a photo in a hairy situation. There’s also some “investigative” sections that are like mini room-size seek-and-finds that help break up the pacing. 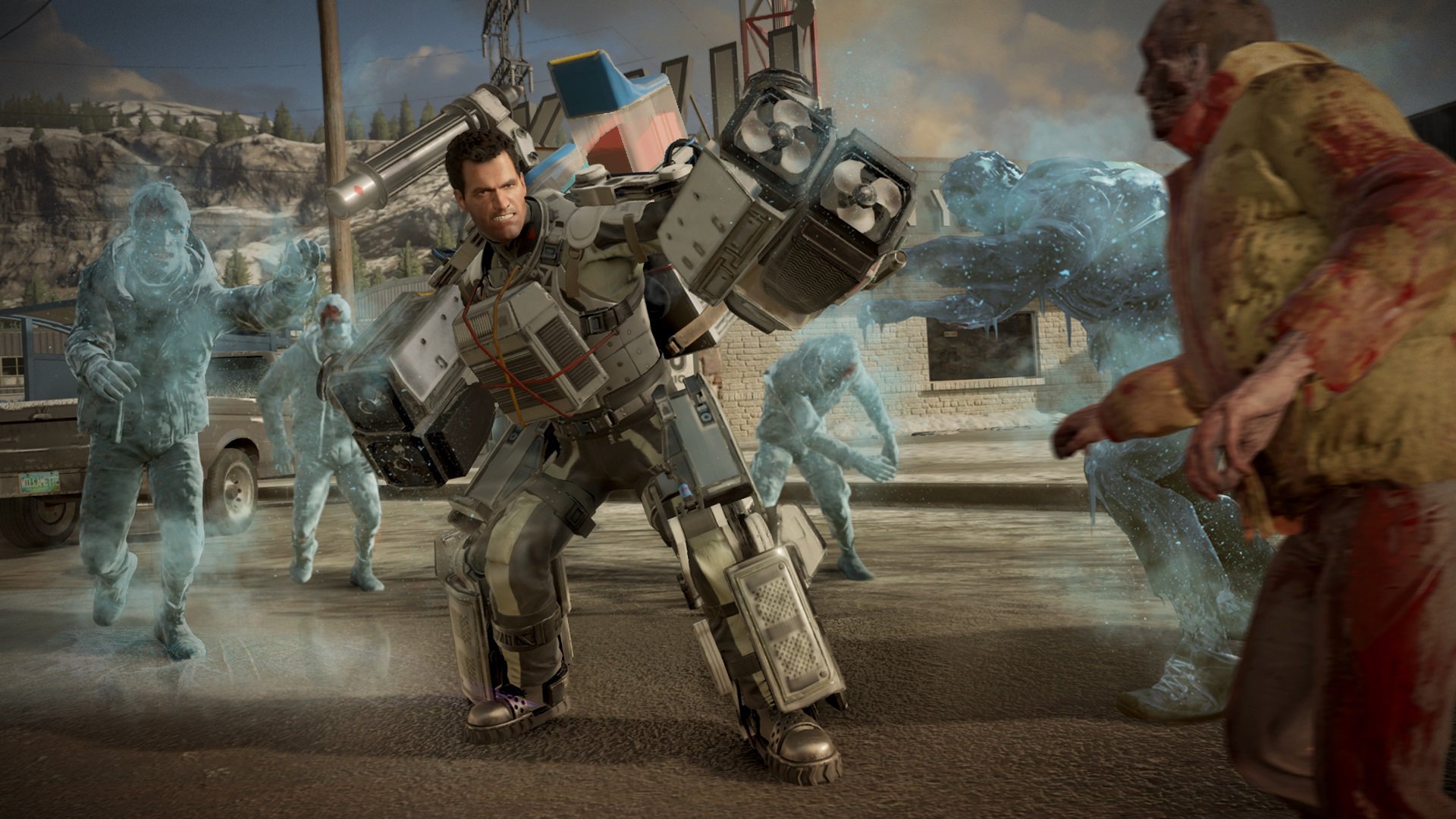 For the most part, the team at Capcom Vancouver got away with taking the existing lore and making it their own. They’re allowed some liberties in retconning the original setting because it’s been rebuilt after the initial disaster. There’s no Psychopaths — they’re called “Maniacs” now, but they’re basically the same. I never got why people carried water for Psychos in the first place as only a select few are worth talking about in each entry, and the same goes for Dead Rising 4. Although I’m not happy with the gutting of many core mechanics, it’s important to realize that a lot of this iteration is business as usual, which is a good thing, even if it does feel a little easier in general.

Multiplayer exists, but it’s not really worth getting excited for based on my limited testing of the mode (and extensive solo-play sessions). It’s separate from the core campaign as I touched on previously, and consists of four episodes that amount to a horde mode/Call of Duty zombies mashup. You have your safe rooms to buy items in, missions (challenges, really) to complete, and so on. It’s boilerplate co-op stuff for up to four players. I don’t have any intention of sticking with it.

For those of you who have been scared off by Dead Rising in the past, maybe this is your time. No, I’m not happy about a lot of the design changes, but the fact of the matter is Capcom Vancouver has created an amazing world to slice and dice in, even on par with my favorite setting so far — Fortune City. If you absolutely abhor the idea of changing Dead Rising, I would stay away from 4, but coming in with an open mind will serve you well.