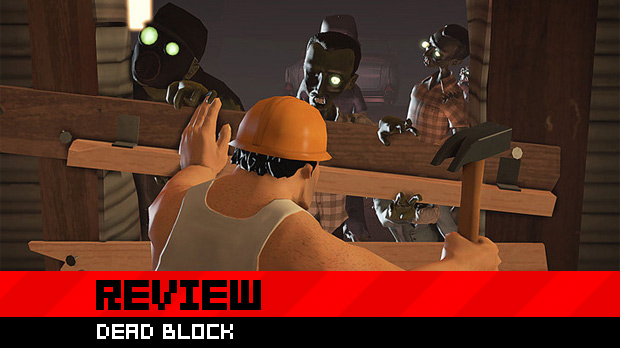 The defense genre is as popular as ever, having grown from Flash games to mobile and downloadable titles. Like with any genre, it was a matter of time until someone added zombies in the mix. Call of Duty: World at War popularized this trend for the masses a few years ago, and now Dead Block attempts to put its own twist on zombie defense.

Unfortunately, this twist doesn’t lead to a game that is actually fun to play. 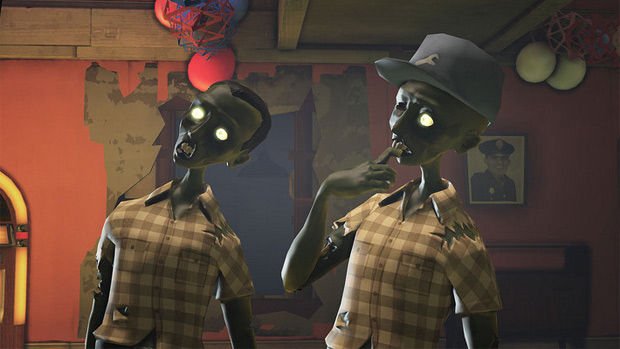 If you have ever played any Call of Duty Zombies mode you’ll find some surface similarities in Dead Block. Waves of zombies try to enter a building and shamble around to your location through windows and doorways that you can barricade. The twist in Dead Block is that you can also put traps in these locations for different effects.

A freeze trap lets you kill a zombie with one hit, a toilet trap rots their meat over time until they die, a cardbox trap makes them attack other zombies, and so on. The idea behind these traps is that instead of manually killing the zombies for points, you are managing their approach and keep them occupied with anything that is not your characters.

By doing so you buy yourself time to gather resources to construct wooden barricades and traps, and to find items and upgrades. Items like coins can be used to buy health or to turn on a jukebox to make all zombies dance, and other items can be used to to kill or distract zombies in various ways. 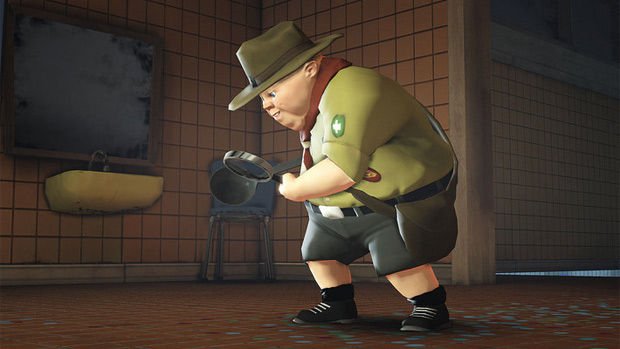 While the idea of managing the flow of zombies and keeping them occupied could’ve worked really well in this kind of game, Dead Block doesn’t utilize this in a way that makes the game actually fun to play. The biggest problem is that to complete a level you need to scour all the rooms to find three specific items, so you can put on a rock show that kills all the zombies through the power of rock & roll, and the process of finding these items is terribly tedious.

Every room is filled with objects you can search for items or upgrades by mashing the left and right triggers, moving a cursor around with the triggers to highlight an object, or using the triggers to do a lockpicking rotation minigame. These distractions get old fast enough, but rooms are also filled with furniture you can destroy to provide you with both wood for barricades and more objects to search.

Since you don’t know inside which objects the key items to clear the level are located and because destroying furniture can spawn objects that might contain these items, you just have to destroy nearly all of the furniture to make sure you didn’t miss anything. Destroying furniture is done by mashing the B button over and over again, and as there is a lot of furniture to destroy in a level you’ll be doing a lot of this. Dead Block has more button-mashing than any Dynasty Warriors game I’ve played. 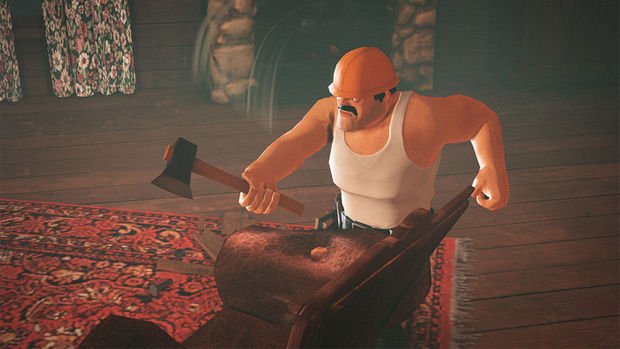 The game’s three different characters are specialized in different skills to complement this design. The construction worker is a good at destroying furniture and constructing barricades, the overweight boyscout can search faster and builds specialty traps, and the ’50s blaxsploitation female cop is good at killing zombies and traps that kill zombies.

You can switch between these characters at will to utilize their respective strengths, or summon them to the room you are in to let the AI do the furniture demolishing, item searching, and defending. However, you can’t get through a level without some manual combat (mapped to the right bumper for some reason) and the combat is loose and clunky. Of course you’re not supposed to do too much manual combat as that’s not what the game is about, but since it’s an inescapable part of the game it can be a pain when you have to.

Even though you can stick to a character that is best suited to manually perform your room-to-room search so you minimize the amount of button mashing, you just end up doing the same thing over and over from room to room and from level to level. Destroy furniture, keep the zombies at bay, search items, and destroy more furniture. Two levels make you kill a set amount of zombies to clear them, but you end up doing the same room searching regardless since you can’t rely on combat alone. 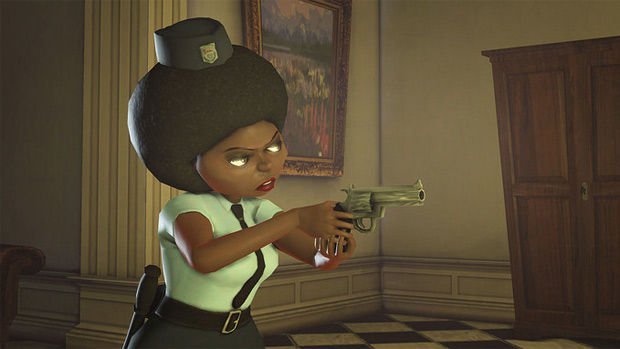 Dead Block is not a very long game and it’s best played a few levels at a time so the repetition doesn’t become too big of an issue, but in the end it’s just a boring game to play. It makes you feel like you are apethetically going through the motions rather than having fun.

It doesn’t help that the game’s aesthetic and trap-building gameplay evokes some of the cartoony style reminiscent of Evil Genius, which was one of the reasons I was initially interested in the game. And it’s this that makes me wonder if Candygun made a wise choice to make Dead Block a game in which you control characters directly.

If the twist to zombie defense had been to make it a top-down management game with a different method of resource gathering and with larger and more complex level designs to encourage different strategies, this could’ve been a really fun and interesting game that would’ve worked on any platform. Alas, it is not. 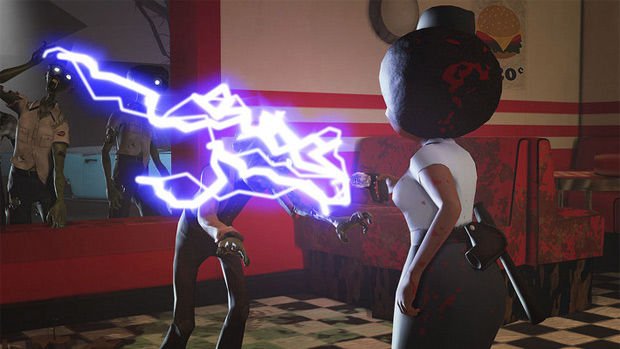 To make things worse, the one redeeming feature that would’ve made it a more intriguing experience is absent. This is a game made for co-op but there is no online multiplayer mode, just a local multiplayer one. Which is fine if you only ever play with friends locally, but a game like really would have benefitted from online co-op play.

The need to communicate with your team mates may have changed the gameplay dynamic to make it rise above mediocrity, but now the majority of players will simply never know if it does. Some levels only give you one character to control and manage zombies from every angle, and these levels can be pretty annoying. With co-op it probably still wouldn’t have been a truly fun game, but I’ll take some fun over frustration and boredom any day.

The ’50s setting is initially interesting, but ridiculous voice-overs and the same damn rock & roll songs in every single level quickly removes any novelty it may have at first. It’s not bad in the way a bad horror movie can be so bad that it becomes good, or over the top like House of the Dead: Overkill, just regular bad. Which is not good at all. 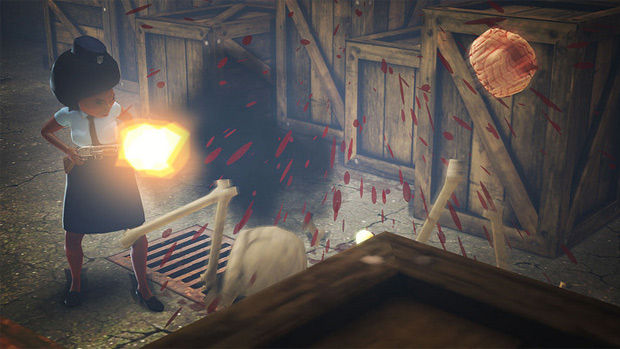 In a mindless way some players may find some enjoyment here, especially if they have local friends to play with. It’s not an insultingly bad game in any way, just a very boring one in which you slowly but steadily remove the lifespan of one of your controller’s buttons. And without any Musou attacks, there’s just no way to recommend that kind of gameplay.

Dead Block takes a popular genre that thrives on increasingly manic gameplay meant to evoke higher and higher tension levels, and turns it into something dull. It may have had the beginnings of a genuiningly fun game at some concept stage, but the end result is a repetitive game that you’ll likely get tired of before it ends.