Having spent an unreasonable amount of time with Dawn of War II and its follow-up expansion, Chaos Rising, there were few games this year I wanted on my hard drive more than Retribution.

The series’ particular brand of combat — beefy dudes shooting and/or smacking one another for minutes at a time — appeals to me greatly. As does the loot system, which is both immensely satisfying and motivating.

Vanilla Dawn of War II was long, and repetitive. Chaos Rising was quite a bit shorter, but had a vastly more interesting narrative. And now with Retribution, the new standalone expansion, Relic Entertainment is offering single-player campaigns for six different races. We’re going in exciting new directions, people. 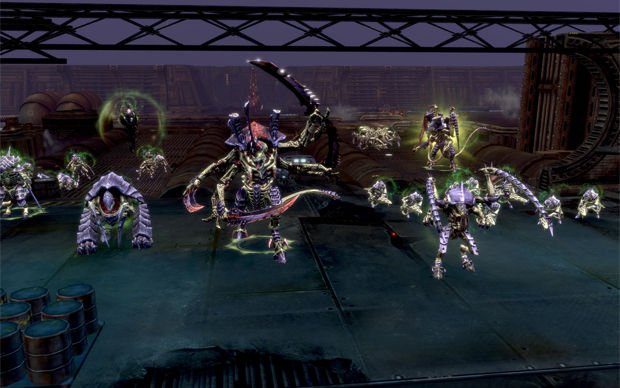 So, you might be thinking, “How exactly did they have the necessary time and money to build six campaigns for a budget-priced game?” Unfortunately, corners had to be cut. There’s a basic story that applies to all factions — the impending threat of Exterminatus (a sort of last-resort, world-destroying measure) — and it’s molded ever so slightly to fit whichever race you want to play as.

This means that there’s about seven or eight hours worth of content for each of the six campaigns, although much of it feels similar on a level-by-level basis. That may not sound too appealing, but it works well enough given the differences between the Space Marines, Chaos, Orks, Tyranids, Eldar, and Imperial Guard.

While the story takes a hit in quality as a result, those Dawn of War II mechanics I adore are still spot-on — and now there’s the option to give the Blood Ravens a break, if I so choose. A fair trade-off, in my mind. The most troubled levels are certainly the beginning few, which are tutorial-like and a pain to run through multiple times. 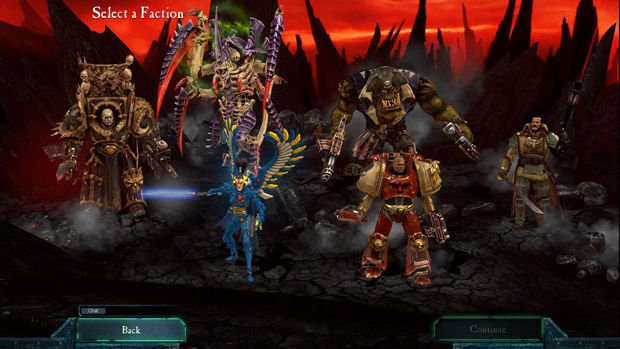 It’s the same basic setup, at least initially. You outfit your hero units with gear, upgrade their abilities with any experience you’ve earned (a more streamlined process now, I should add), and select your mission from the map. However, you’re given a choice: enter the mission with your four heroes, or swap some of them out for support squads and a raised population cap.

Interestingly enough, some of your hero bonuses apply to these replacement squads, so either option is totally viable depending on the situation. This also leads into Retribution‘s new-found focus on bigger armies. Long story short, Relic has brought elements of multiplayer into the single-player.

So, you have a population cap, requisition, and energy in single-player now. These can be increased by capturing control points scattered across the map, and allow you to reinforce your starting troops with, eventually, anything from the full family of unit types. (Completing a level lets you pick an unlock, some of which are access to new units.)

This sort of ties in with your global abilities. Upon killing enemies, you earn points which can be used to say, drop turrets on the field, or call in an air strike. These elements go a long way in making Retribution more action-packed and, well, interesting. While you can still play with just four hero units and probably perform just fine that way, there are now all of these options at your disposal to mix up the flow.

It’s also worth quickly mentioning the load times; something is up with them. The game almost seems to freeze for me in the time between clicking “start mission” and having the actual loading screen appear. Similarly, completing a level and waiting to be brought into the mission-select screen has a similar effect. Not game-breaking by any means, but irritating nonetheless. (And yes, my PC is perfectly capable of handling Retribution, thanks.) 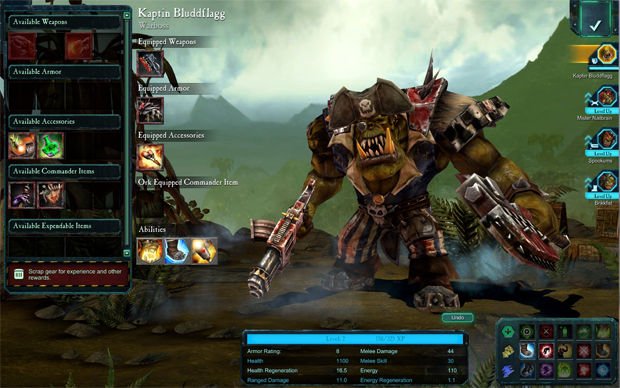 The biggest addition to Retribution is the inclusion of the Imperial Guard as a playable race. More so than any other race, these guys are actually kind of fragile. Almost. Given their newness, I’d recommend giving them a first or second chance when going through single-player. One of the abilities focuses on shooting your own troops to “encourage” everyone else to fight harder, and that’s badass.

The Last Stand, a wave-after-wave co-op mode between three players, is even better now. The Imperial Guard’s Lord General is new, as is the much-improved The Anvil of Khorne map. Rather than having to hit wave ten before the adrenaline starts flowing, this fast-paced map basically kicks it off with the notch turned up to eleven.

Given how much time I’ve put into The Last Stand previously, Retribution is worth it alone simply for this mode. It’s really that good, if you haven’t tried it — challenging, intense, and full of sweet loot.

On the whole, this, campaign co-op, and the competitive multiplayer modes are a step up with the decision to drop Games for Windows Live. Steam itself is now the backend for the game’s online, and it’s a better fit. Even getting into matches seems noticeably faster.

To quickly touch upon the aforementioned competitive multiplayer, which I will gladly admit is not really for me, you can now play as the Imperial Guard. Beyond this, and whatever balancing work Relic has done since the Retribution beta, it appears to be essentially the same. For those who haven’t played the previous two titles, though, it’s a slick deal — the multiplayer is fairly extensive. 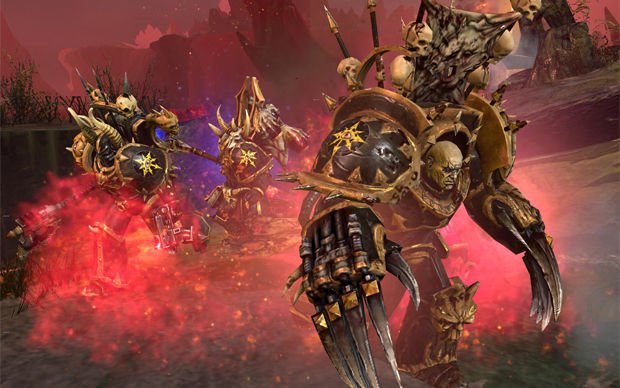 It’s a shame the story had to be generalized in order to mesh with everyone’s faction of choice, but ultimately, the decision to do so was a wise one. Had it been merely the same handful of Blood Ravens again, chasing after the Chaos Space Marines and assorted demons, I almost certainly would’ve been burned out before the conclusion.

At $29.99, it’s hard not to recommend Retribution. You’re getting a standalone experience with an exceptionally large amount of replayability, depending on how into Warhammer 40,000 you are. And even if you ultimately only touch one of the campaigns, try out the multiplayer for a bit, and dabble in The Last Stand, it’s worth picking up.

It’s also worth considering for anyone who has yet to touch the series. You can absolutely dive headfirst into Retribution and have a blast. In fact, that might actually be the ideal way to do it, as much of the repeat content will feel fresh.

A solid effort by Relic. I eagerly await whatever comes next.