As I played through Darkspore, my opinion of the game kept changing. It’s a dungeon crawler in the vein of Diablo or Torchlight, but in a futuristic setting. While many games in this genre essentially end up being Diablo with a pretty coat of paint, Darkspore introduces a number of fresh ideas and concepts that make it a whole lot more than a clone.

With unique concepts, however, come unique problems. None are great enough to ruin the game, but noticeable flaws certainly exist. People who are willing to invest some time with Darkspore, though, will find an enjoyable, though not perfect, experience. 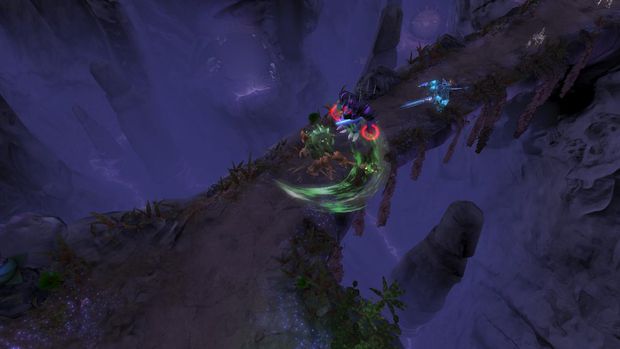 Darkspore’s most remarkable trait is the number of different heroes and the three-person squads you adventure with. Rather than build up a single character — like most games in the genre — there are 25 base heroes you can unlock. Each hero has four different “variants,” — alpha, beta, gamma, and delta, which cause some slight variations in appearance and base stats, and have a skill that no other variant of that specific hero has. The variants don’t dramatically change the playstyle of an individual hero, but do allow for some stat customization.

Heroes can be one of three different “classes”: sentinels, ravagers, and tempests. Generally speaking, sentinels are your high-health tanks, ravagers are your more DPS-oriented attackers, and tempests tend to be ranged attackers. It’s difficult to lump all the characters into one single category, though, because the uniqueness of the heroes means that no one quite fits into a perfect mold — the types are really just a guideline. Some ravagers have long range attacks; there are a few sentinels who do a lot of fighting through high-damage pets. Some characters across classes can heal, some specialize in area of effect attacks. No matter what your playstyle is, you can probably find at least one hero that you like.

There are also five genetic types — bio, necro, quantum, plasma, and cyber. Genetic type primarily influences two things: the type of items that can be equipped — Items are either available to all characters, or characters of a specific genetic type. Class does not matter. — and the damage they take. All the monsters you encounter also have a genetic type, and any monster that is typed the same as your current hero will deal double damage to you (the reverse is not true — you don’t do double damage to them). 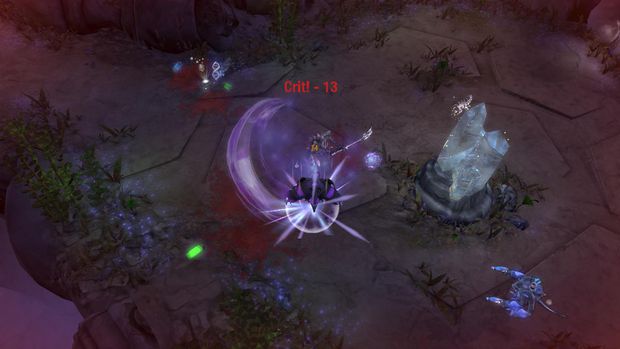 Darkspore is played with squads that are made up of three heroes each. From the main menu, you can alter the equipment of your squad at any time and swap heroes in and out of squads on the fly. Once you’ve set up the squad you want to use, you enter a level, where you can swap out the hero you’re currently controlling for any other in your squad. While you might be able to get through the first few levels without having to swap, it quickly becomes a necessity.

There are six kinds of enemies in each level, and in the starting levels, they only consist of two genetic types. Their types aren’t revealed to you until right before you launch into the level, but assuming you’ve built a balanced squad, you’ll always have at least one hero that doesn’t match any of the enemy types. As you progress, however, the number of types you face in a level increases up to four, and enemies start gaining resistances and immunities to specific genetic types. At this point, you’ll have to be swapping your heroes in and out, or the double damage you’ll take will destroy you.

As is typical of the genre, you’ll find stat-boosting items to equip as you kill enemies and progress though the game. Unlike most other games, though, your heroes’ abilities and stats are determined solely by the items they equip. There’s no stat placement, no skill picking — nothing other than equipping items. All heroes have one basic attack and three skills each, and these skills don’t change for the entirety of the game. A hero’s “level” is determined by the average level of the items they’ve equipped, and the levels really only serve as a rough guide to how powerful your hero is. A low “level” hero who has carefully selected and equipped gear will probably be better than a higher level hero who has randomly thrown on the highest level equipment he can find without regards to the stat bonuses. 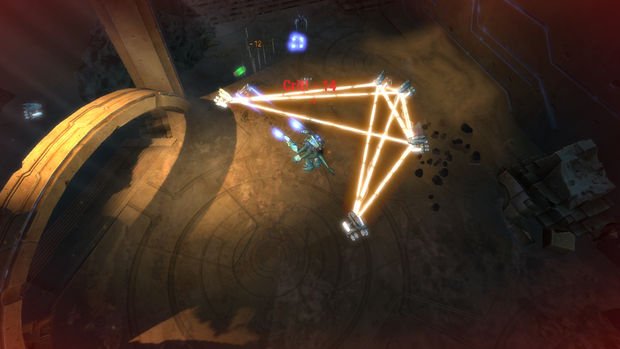 Darkspore‘s stats aren’t particularly complex, however. There’s the standard health and power, which determine your hit points and “mana.” Strength, dexterity, and mind are the “primary” stats, and each carries its own small benefit. Their main function is to increase the power of your heroes’ skills — sentinels get a damage boost from increased strength, ravagers get a boost from dexterity, and tempests get boosts from mind. Finally, there are three ancillary skills — dodge rating, resist rating, and critical rating. As I said before, these stats are entirely determined by your equipment (aside from the base stats each character starts with, which are all reasonably similar), so your characters only get stronger as you find better equipment.

All this explanation leads into the main problems I have with the game: you are completely at the mercy of the random number generator as to which of your heroes grow and which ones stagnate. You may end up with a hero that’s a clear favorite, but if you’re not lucky enough to get equipment that he can use, or that’s a good fit for his build, you may have to set him to the side for a while. While careful play counts for a lot, strategy can only take you so far if you’re underleveled thanks to the limited number of skills each hero can learn. You’re encouraged to try out a whole bunch of different heroes, but it can get rather frustrating to end up with a team you don’t particularly like for a while, simply because the item drops you got best fit them. 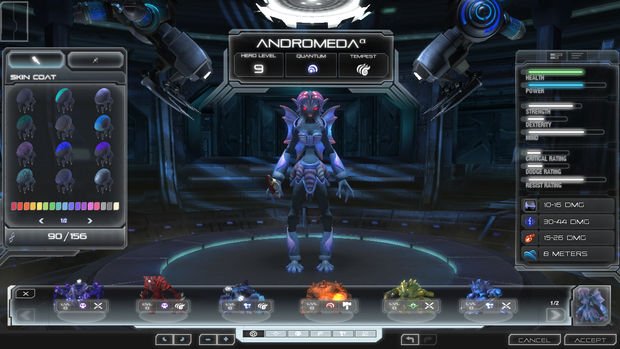 You can, of course, grind for more gear. One aspect of Darkspore I really like is its chain system: at the end of each level, you get a rare item. You can either take the item right away, or risk it by going straight into the next level. If you succeed, you get one additional item, and the item level of both items increases. At the start of the game, you can only chain two levels, but the limit increases as you progress through the game: three, then four, and finally unlimited chains. If you’re willing to sit down and plow through an entire difficulty from start to finish without stopping, you’ll get some awesome rewards. 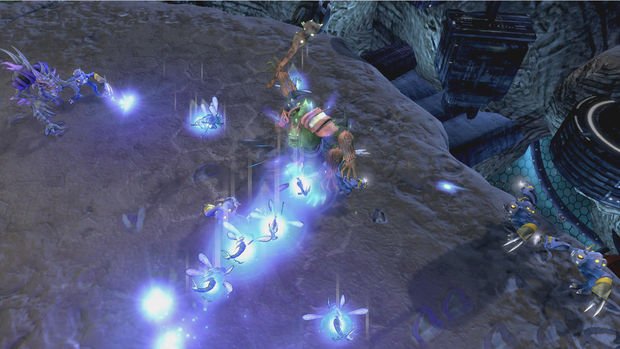 On the flip side, grinding, as in most games, can get tiresome. Every level is unique the first time you play it, and when you go back to replay a level you will randomly be assigned any of the previous maps you’ve already completed, with enemies that have been scaled up to an appropriate level. This helps break up monotony some, but you quickly learn the layouts of every level, and they can really start to feel repetitive. Some random generation in the actual level structure would have gone a long way in keeping things fresh.

Another issue is a result of there being so many different heroes to choose from. While I would argue that the wide hero choice is probably the strongest aspect of the game, and definitely what sets it apart, it also brings with it a significant negative: As you unlock more and more heroes, equipping them and managing your inventory becomes really tedious.

While you can see all the items you’ve collected in your inventory, you can’t equip them from there. You must instead enter the character editor, which only shows one hero at a time, and you can only see the items that the currently selected hero can equip. This essentially means that every time you finish a long chain and have an inventory full of new items, you need to go through all of your characters one by one to distribute equipment.

While you probably won’t have to go through 100 characters, as you’ll identify which variant of each of the 25 major characters you want to focus on pretty quickly, equipping 25 separate heroes, in a separate screen each time (and more if you do decide to build up variants of the same hero separately), becomes time-consuming and frustrating. I often found myself taken ten to fifteen minutes in the character editor after every completed chain, sorting through all the equipment I’ve found and equipping all of my heroes. It gets tiresome.The character editor uses a modified version of the Spore character creator, which means that each time you equip a new item, you actually get to physically place it on your hero’s body. I would gladly trade that for an easy way to quickly equip all of my heroes from the main inventory screen.

As I played through the game, I would alternate between having a ton of fun, and becoming frustrated at the repetitive levels and time I was spending in the character editor. The catch-22 here is that the higher you get in difficulty, the more strategic the game becomes and the more fun it gets, but progressing further also means that the levels feel more repetitive and the editor and interface start bugging you more and more. 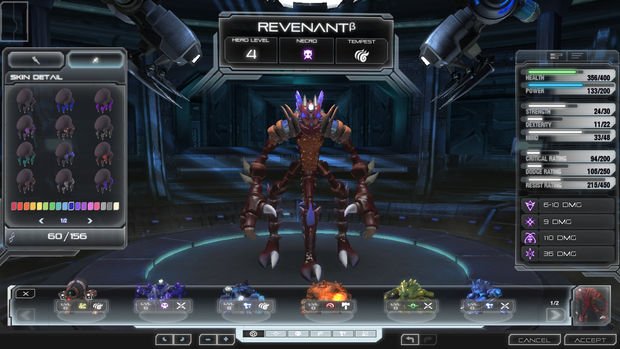 However, despite its flaws, I really do find Darkspore to be a worthwhile game, and I plan to continue playing it for some time to come. I don’t think there’s anything fundamentally broken or boring about Darkspore’s gameplay itself — most of the issues I have with it are really design decisions and interface issues. I’ve also ended up with a happy compromise that I think maximizes the fun of the game while minimizing the tedium — I find I have the most fun when I run one or two big chains a night after work, and then call it quits.

Once you get past the beginning, easier levels, sitting down for a five hour session of Darkspore can be daunting — after a weekend of playing Darkspore almost non-stop, I thought there was no way I’d want to keep going after the review was finished. I planned on exploring a few more levels, wrapping up the review, and moving on. And it was when I started playing less of the game that I really started seeing the appeal of it. Just an hour or two a night though, enough to progress, get some new equipment, and spend one long session in the character editor, felt like the perfect amount of time. I’ve gone from not thinking I would ever play the game again to actually looking forward to a few levels of Darkspore every night when I get home from work, even though I’ve finished the review.

Darkspore isn’t perfect, but it’s solid, and I’m really happy to see a game in this genre that takes some risks and introduces some new mechanics. I would love to see randomized maps, a less clunky inventory management system, and a way to progress through the game that isn’t quite so entirely luck based. But even with these issues Darkspore manages to be entertaining. I expect to see a people playing Darkspore for a long time, as long as they pace their gameplay and don’t burn themselves out with marathon sessions too early.