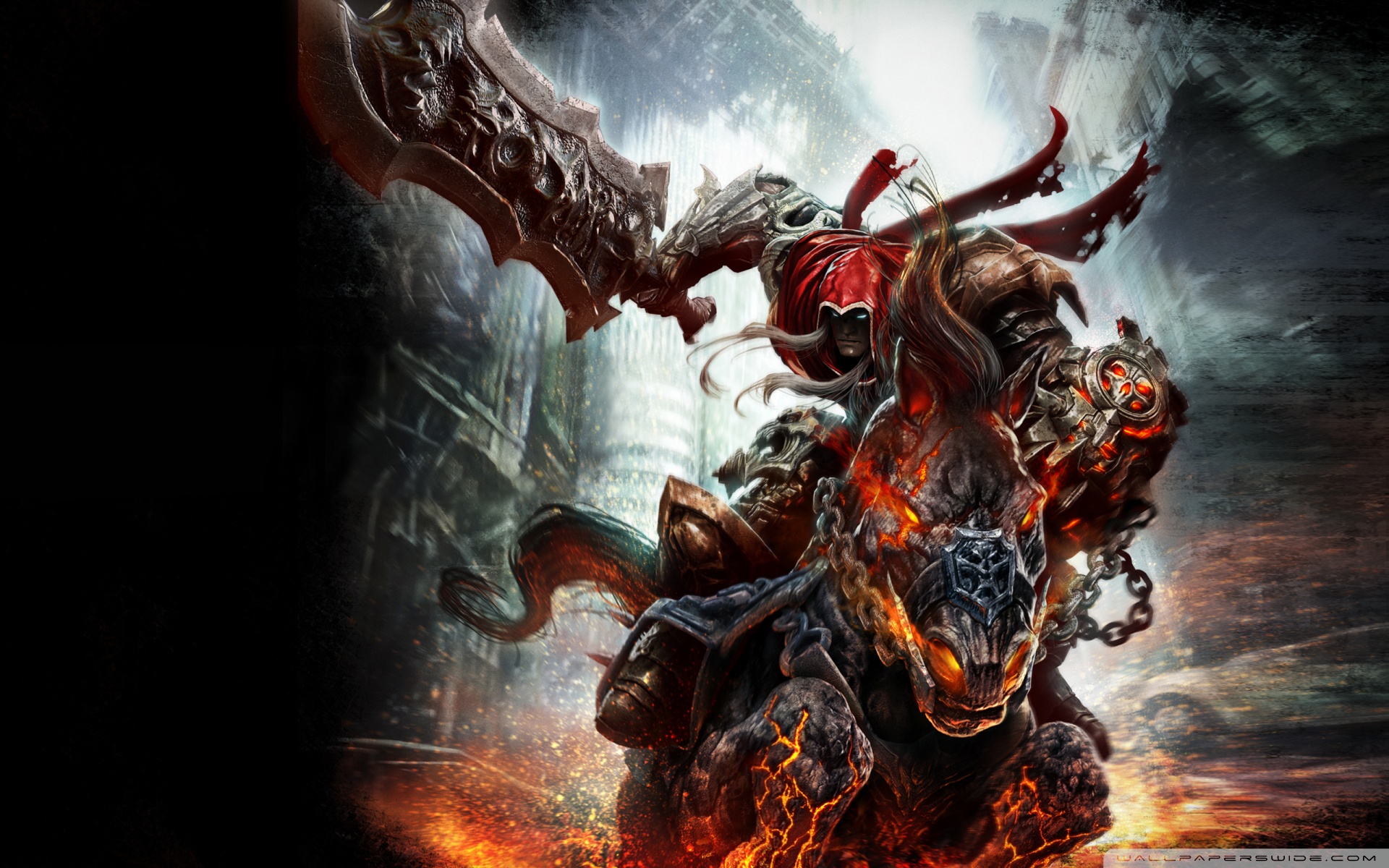 Darksiders was one of the last generation’s hidden gems, a dark, beautifully designed pastiche of several other action-adventure titles. Planned as a four-part series, the franchise only got as far as #Darksiders2 before publisher THQ declared bankruptcy in 2011, and its intellectual properties were sold off piece by piece. Most people who’ve played Darksiders were probably disappointed that THQ fell apart before the planned quadrilogy could be completed, as the two games we got were both highly entertaining, enjoyable action titles.

Fortunately, the company that purchased the rights to Darksiders, Nordic Games, seems to be interested in keeping the franchise alive. After purchasing the bulk of THQ’s IP, it rebranded its company as THQ Nordic earlier this year. Darksiders: Warmastered Edition is the first release under this new branding, and it’s a great way to start things off. 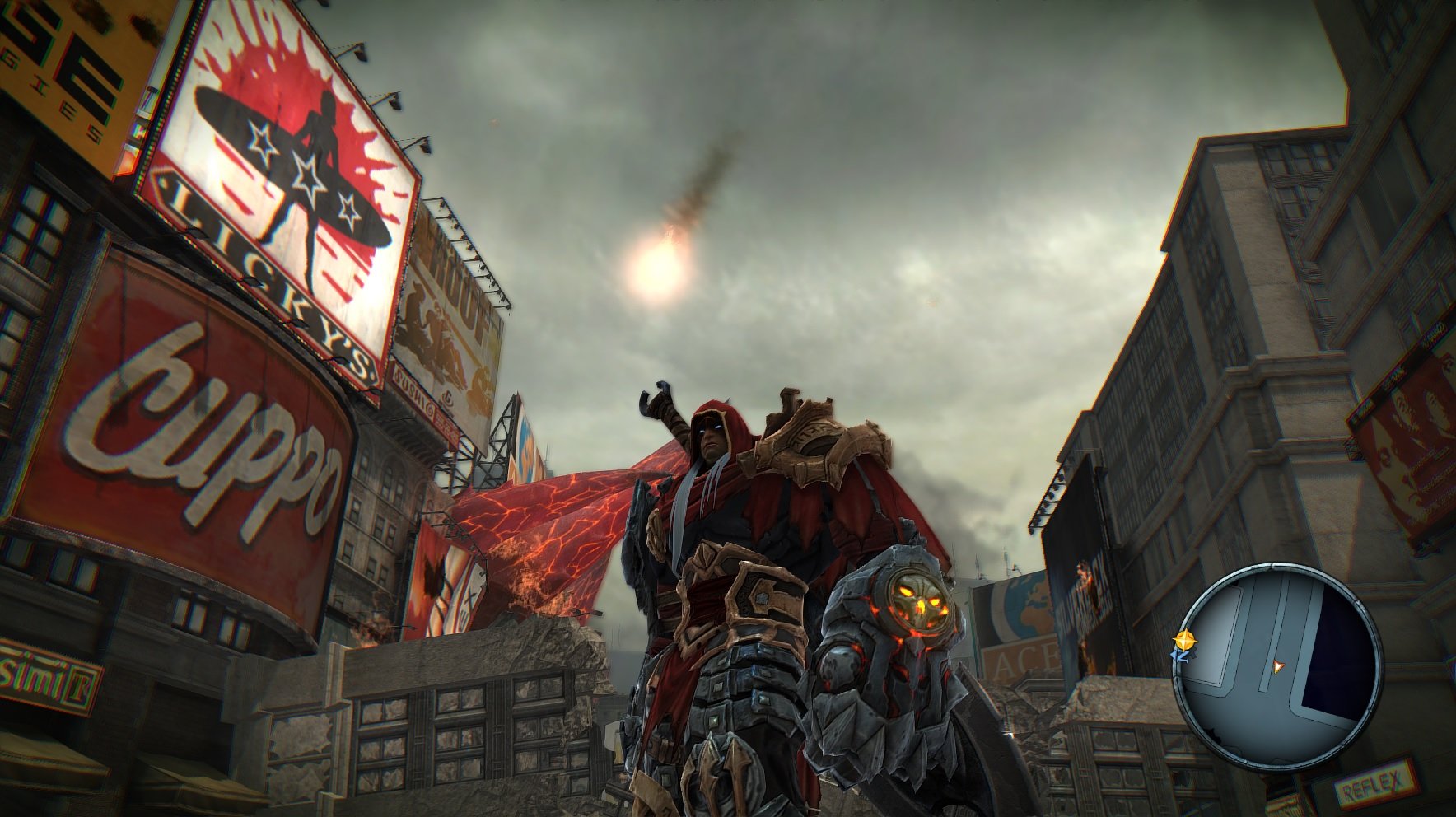 Let’s start off by acknowledging the biggest problem with Darksiders: Warmastered Edition; that title is goofy as hell. It fits in with the theme and tone of Darksiders, but it’ll probably be a turnoff to people who aren’t familiar with the concept. Apart from that, it’s worth noting that this remaster is strictly an aesthetic upgrade, and there’s no change whatsoever to the audio or gameplay.

Each of the Darksiders games tells the story of one of the Four Horsemen of the Apocalypse, and the first centers on War. War and his brothers act as enforcers for the Charred Council that maintains the balance between Heaven and Hell, keeping them in check until the third faction, humanity, is strong enough to provide a challenge to both sides. As the game opens, War finds himself called to Earth as Angels and Demons fight their way through the streets of a nameless city, but the squishy humans who reside there are no match for either. Clearly, he’s been summoned too early.

War fights his way through the streets until he comes up against a demon he can’t defeat, as it seems something is sapping his powers. He’s knocked unconscious and wakes up before a tribunal, accused of being the one responsible for kicking off Armageddon too soon and dooming humanity. He convinces the Council to allow him to return to Earth in an attempt to clear his name, but they bind him with a Watcher, a six-eyed demon that makes sure he stays on task.

The story takes itself completely seriously, but there’s a disconnect between the heavy-handed narrative and the exaggerated visuals, and it can be hard to tell if Darksiders is being sincere or has its tongue planted in its cheek. The use of Christian end-times mythology as a backdrop for the story works well, and the chunky, colorful Joe Madureira designs resemble decked-out characters in World of Warcraft. Everything is edgy and over-the-top; there’s not a treasure chest in the game that doesn’t have at least three skulls in its design, and War’s enormous sword is known as the “Chaoseater.” Although this can feel overblown, it’s still fun. It gives Darksiders its own charm, kind of like a kid who’s trying too hard to impress you.

Darksiders borrows heavily from some of the best titles in the action and adventure genres, and although it’s imitative, it comes together to be more than the sum of its parts. Much of the gameplay is borrowed from The Legend of Zelda series, with dungeons that must be explored to find tools that aid in exploration and can also be used in combat. Beating a boss upgrades your life bar, and you literally collect the creatures’ hearts after besting one. The overworld’s visuals resemble Gears of War in their greyish-brown defiled beauty, and bosses might remind you of God of War or possibly Shadow of the Colossus. There’s even a dungeon later in the game that borrows ideas from Portal, with an item that shoots orange and blue rifts at special targets. You’ll come across some genre clichés, but for the most part, they’re fun ones. (A large, slow-moving elevator? Sure hope a bunch of mooks don’t jump in and start whaling on me.) It’s up to you to decide whether you think of it as derivative or an homage. 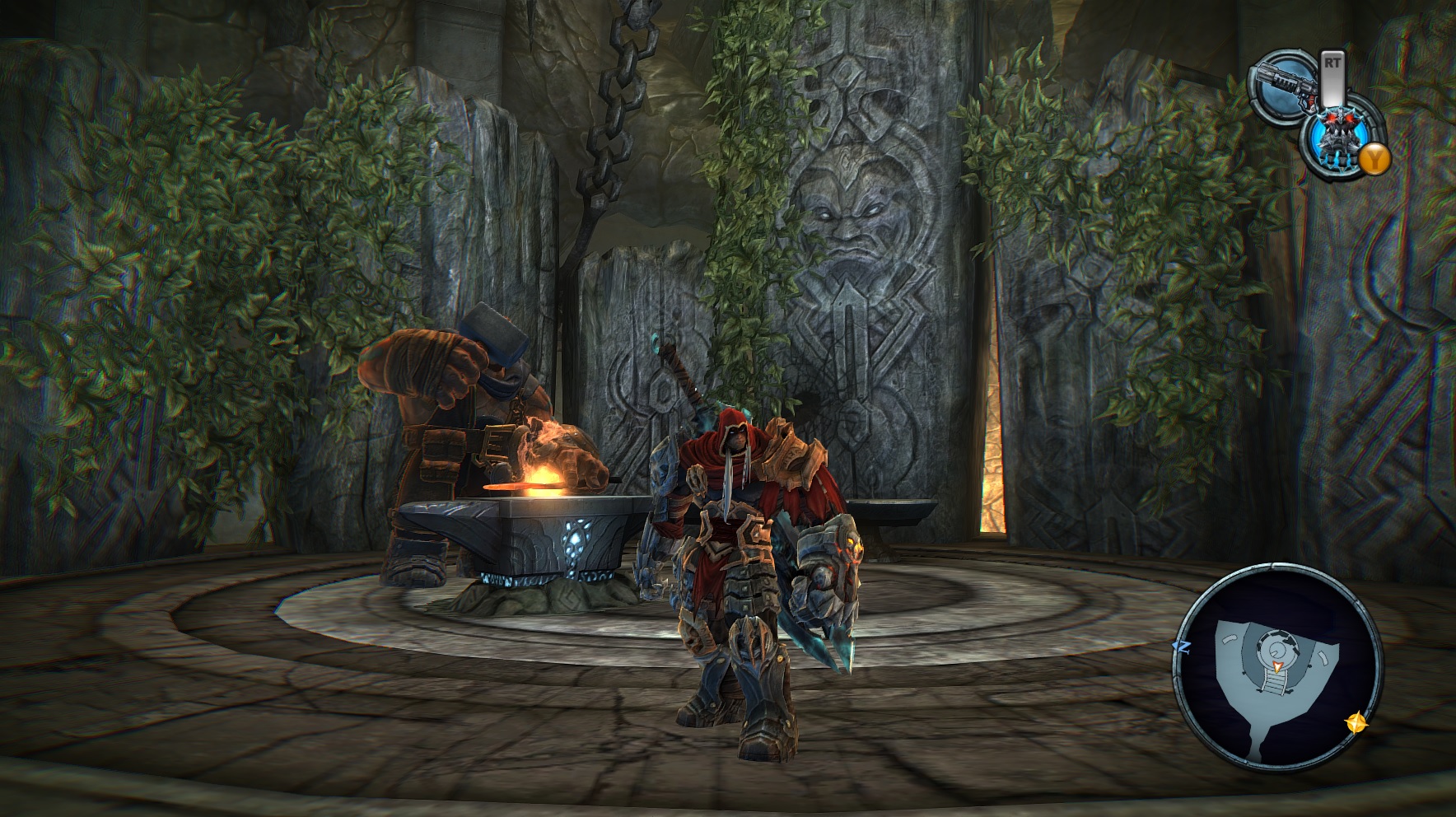 As I mentioned, neither the audio or the gameplay have been altered for this re-release. Thankfully, neither of these needed any changes. Liam O’Brien gives War a stoic, world-weary voice that sounds like he’s constantly holding back his rage, and Mark Hamill lends the Watcher the same voice as his Fear Feaster character from Adventure Time, basically Joker without the mirth. The boss’s voice lines are too few and spoken too frequently, but it’s a minor annoyance you probably won’t notice if you don’t get stuck on a boss fight.

If you’d like to know more about the gameplay, I’d recommend checking out the review posted in 2010 for the original version of Darksiders. Everything Jim wrote there is still accurate. You’ll still spill gallons of red and black demon blood, you’ll still slam zombies to death with a Yugo hatchback, and you’ll still get frustrated that you can’t make use of your double jump or glide if you step off a ledge without jumping. That said, the combat is satisfying and challenging, and the visuals are better than ever. 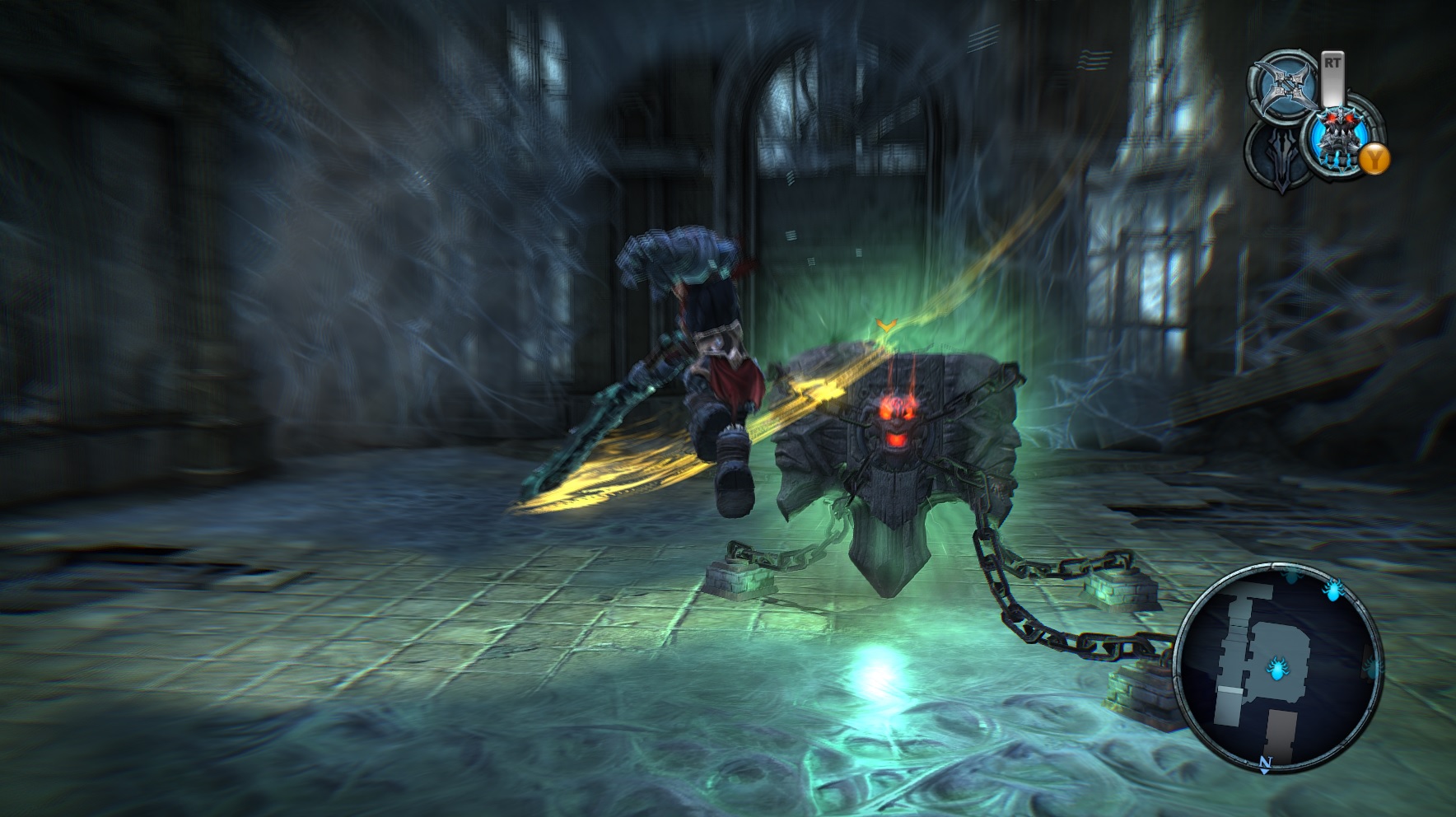 I hadn’t played the original version of Darksiders on PC before this review, so I’m not sure if the previous version had the same issues, but I did run into some minor problems. During the first couple of hours, lip syncing didn’t quite match up during cutscenes, though this did self-correct after a while. Even though I was playing with a controller, the mouse pointer showed up center screen whenever I was shopping, no matter how many times I moved it offscreen. It may have been a coincidence, but at one point my wife needed to restart our router and my game crashed, so it seems that Darksiders: Warmastered may require a persistent internet connection on the PC. Apart from these niggling issues, the game performed flawlessly on even my modest PC hardware, so I have no doubt it will run smooth as silk on a beefier system or a modern console.

There’s been no shortage of great games this year, but Darksiders: Warmastered Edition still holds up exceptionally well, and it’s easy to recommend. It’s not quite as fresh and exciting as it was in 2010, but I still think it’s something everyone should try out. If you’ve played it before, it’s worth revisiting. If you haven’t, it’s a solid adventure that’s well worth your time. The budget price makes it a great value, with a campaign that will take most people between 12 to 20 hours to complete. I’m glad to see that THQ Nordic seems interested in keeping the series in the public eye, and I hope this means that the Darksiders franchise will be resurrected. I look forward to seeing how Pestilence and Famine will play in Darksiders 3 and 4.