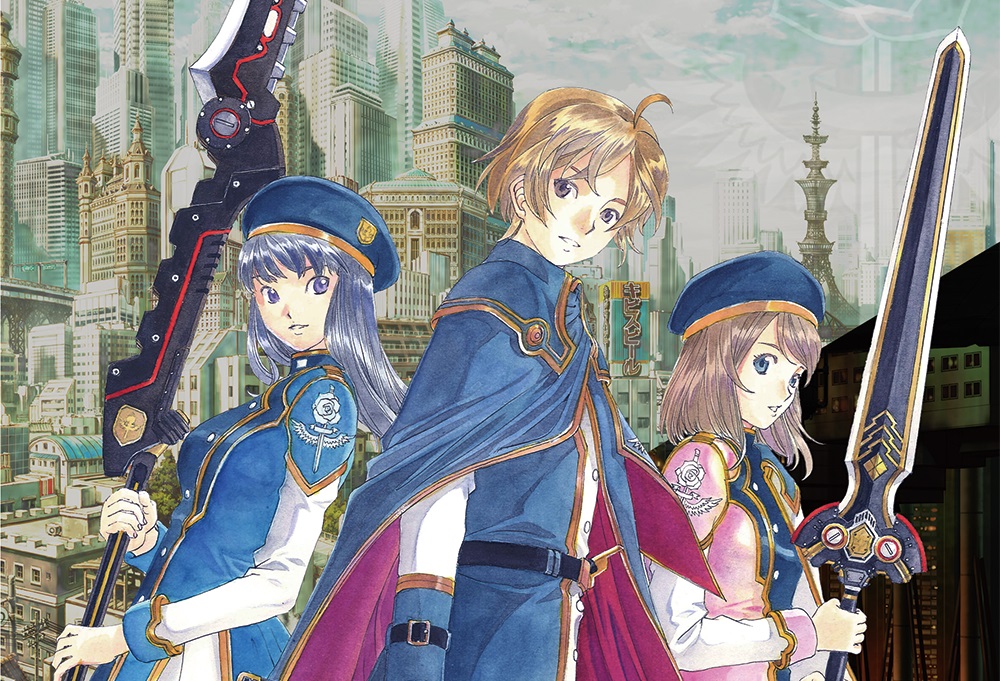 Beware of the thorns

The idea of having people from different game companies work on a project together is something that always piques my curiosity. These moments can result in wonderful creations that might’ve never happened if the teams didn’t join forces, such as Chrono Trigger and the Persona 4 Arena fighting games.

With Kosuke Fujishima (the Tales of series’ character designer, the Ah! My Goddess manga’s creator) and Takumi Miyajima (Tales of Symphonia and Tales of the Abyss’ script writer) involved in Compile Heart’s Dark Rose Valkyrie, it felt that this project would grow into an enjoyable game. Unfortunately, two experienced gardeners aren’t enough to make this flower bloom. 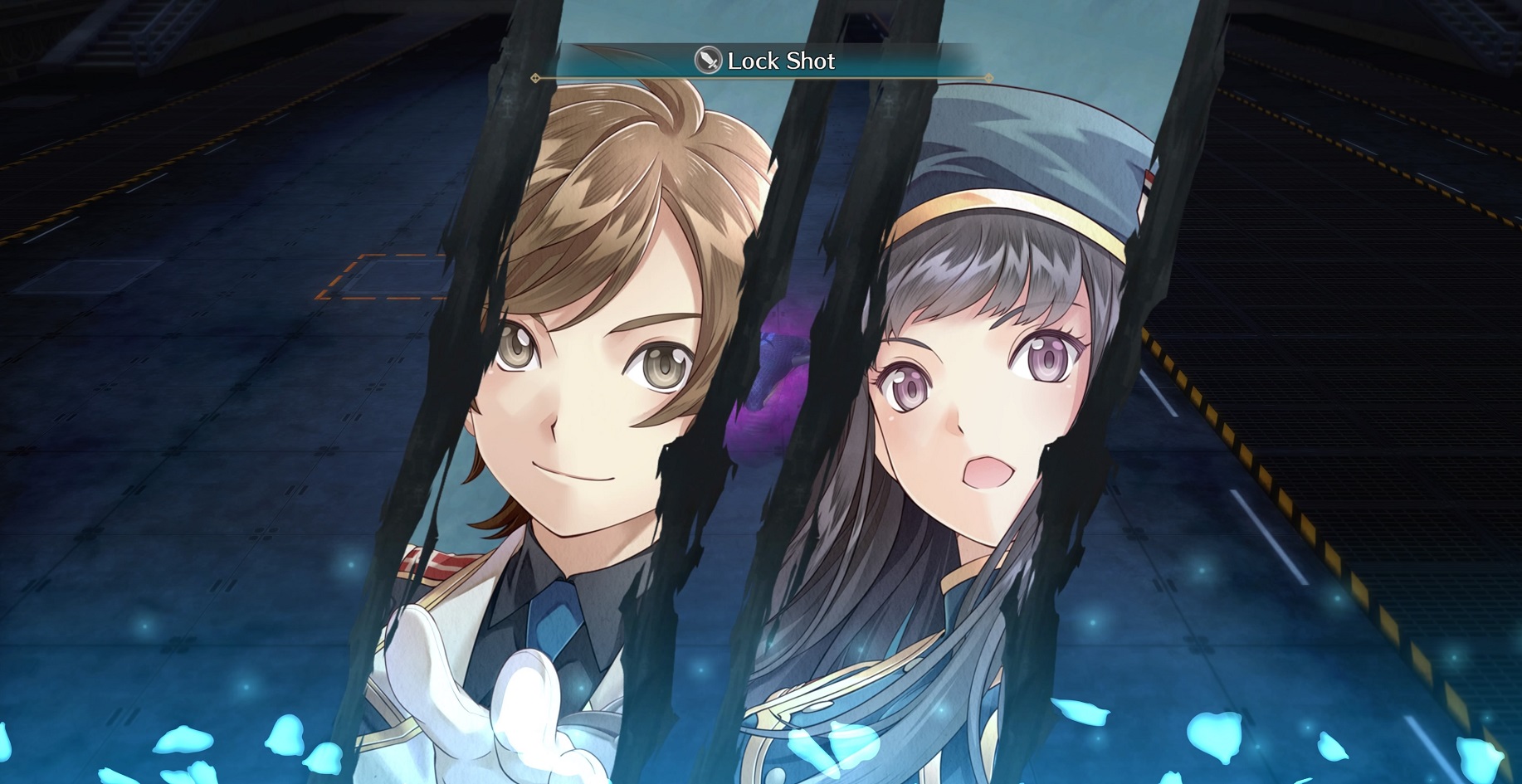 Dark Rose Valkyrie hits us with an intense tale in which a society deals with a virus that turns humans and animals into creatures called Chimeras. As the main lead Asahi joins a military group that combats this threat, he’ll have to do his best as a commander to his subordinates, who mostly consist of cute girls. On top of that, they’re wielding giant weapons called TCS/Valkyrie, which come with their own set of side effects.

While the game’s premise sounded interesting, the majority of its tale forces players to go on a wild goose chase as they confront a pair of special Chimeras. Whenever you come across these villains, they send a horde of bosses at you while they get away. At first, these segments were tolerable during Dark Rose Valkyrie‘s early chapters, since they help get people acquainted with the major adversaries; however, things start to get old when it becomes a recurring element in most major quests. In fact, these segments made me feel like I was going through a bad filler arc in a long anime series.

Due to the bad guys stalling the main cast, Dark Rose Valkyrie felt like a title with a ton of padding. While there was a twist that explained the villains’ motives, it wasn’t enough to reward the player for enduring the tedious confrontations, since it occurred way past the game’s halfway point.

It doesn’t help that players have to complete a set of missions before and after the main story quests. Seeing that they’re the usual filler where you slay a specific set of enemies and collect materials, their presence adds to the game’s list of things padding out the adventure. While these tasks are in many RPGs, they work better when players are given a purpose — especially if it involves learning more about the world and characters. In Dark Rose Valkyrie‘s case, they feel more like a chore than something integrated into its narrative. Since this is a 60-hour-or-more game set in a dull, NPC-free region that only contains dungeons, monsters, and hidden items, the journey can get old too quick.

When you engage in battles, Dark Rose Valkyrie uses a system similar to the one in the Grandia series. The main difference is that the heroes and enemies’ actions are divided into four levels, which determine how fast they can act. Since everyone’s moves can activate while others are acting, this lets you witness your party members pummel a target together while they delay its turns. At first, these fights add some interesting strategic elements to the mix, but they start to fall apart in the later parts of the story.

Battles devolve into confrontations where you rely on using special skills to take out enemies in formations where they stand behind other monsters. This results in cases where you can’t delay a foe’s action until you slay the one in front of them. On easy mode, this isn’t a problem since many enemies go down quickly; however, this is a different story on hard and above. 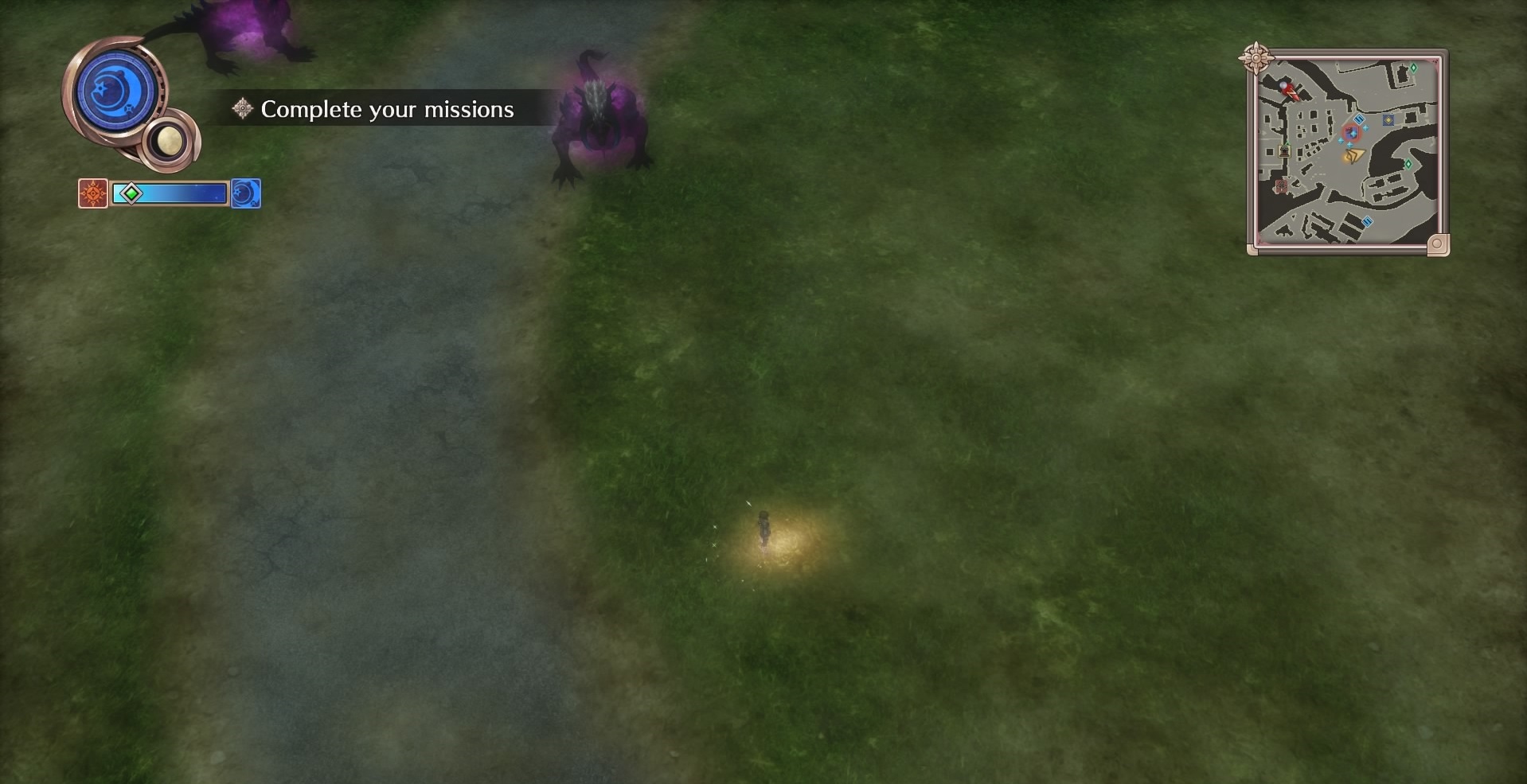 Since it takes around 40 game hours for your characters to learn offensive and support moves with an area of effect, you’re stuck with mostly skills that target one enemy. In a difficulty where the bad guys can kill you in a heartbeat, having zero moves that can wipe out multiple foes feels inconsistent with the player’s progression. Even when you get access to these moves, their range isn’t wide enough to affect your party members and opponents who’re spread out. When you combine it with the filler-like story bits, it’s easy to lose motivation while you’re fighting to protect humanity.

Other than that, players are able to do an attack where their reserve members can damage all enemies, but only when you break through an enemy’s defense. This happens through damaging them normally, which can result in your characters unleashing the full potential of their basic attacks combos. Since you’re able to customize the way your party uses their normal strikes, this helps change up the action. Of course, it makes your team look cool when they combine their ranged and melee actions with their TCS.

Unfortunately, this tactic is only effective during Dark Rose Valkyrie‘s early chapters, since I ended up in many situations during the later parts where I killed the enemies without breaking their guard. This serves as an example where the game fails to keep its system consistent with the difficulty spike, as its unique features fade into the background. 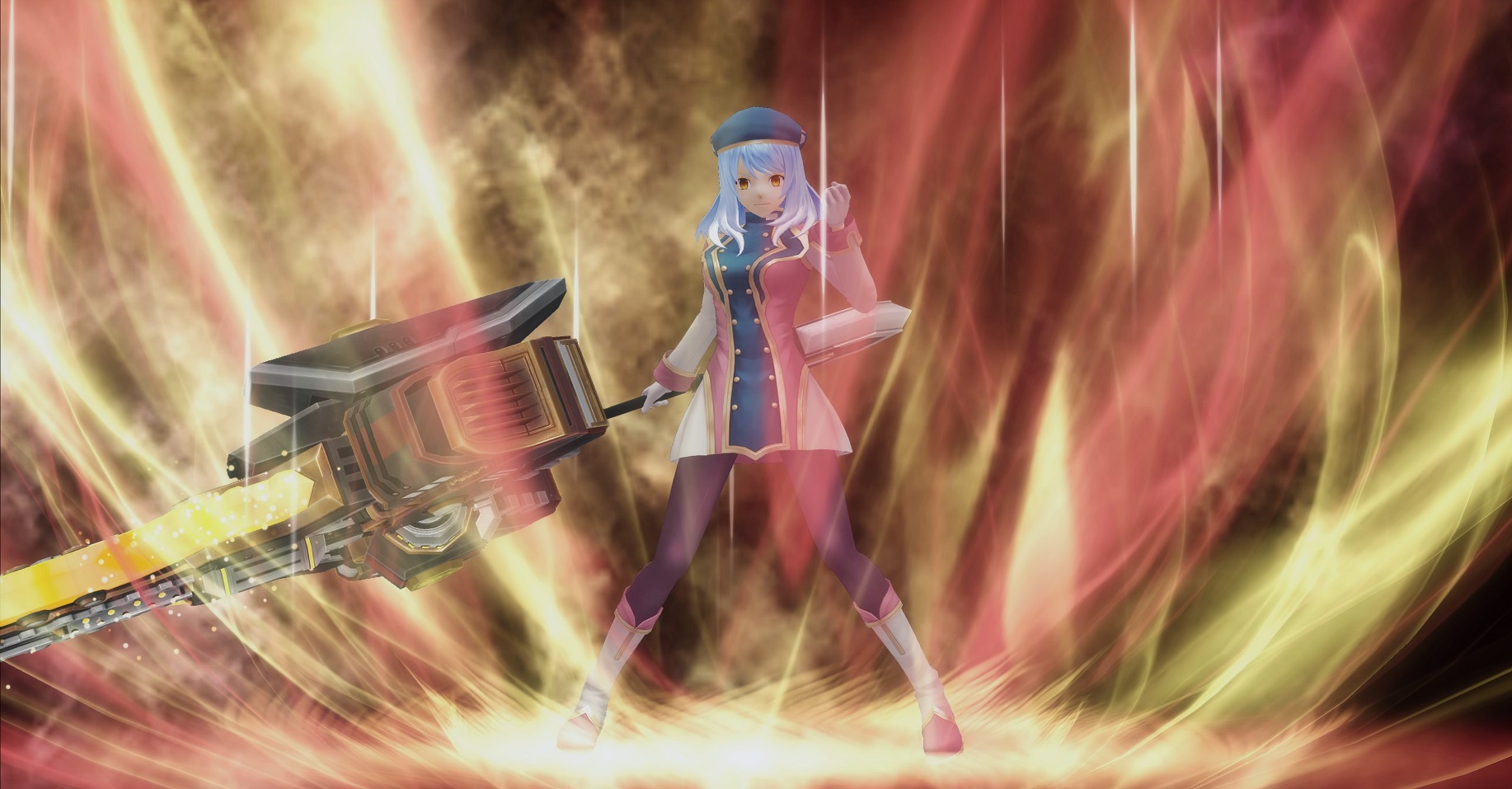 In terms of trump cards, Dark Rose Valkyrie attempt to balance its fights is through the party’s TP gauge. This gives you access to “Ignition,” a command that makes you immune to status ailments, and “Overdrive,” a transformation that improves your combat skills and speed. If you have any points available when an enemy attacks you, your reserve members can nullify any attack. Before you get attached to this feature, you’ll rarely get to start a battle with a full bar since a third of it is carried over from your last fight. This becomes a nuisance when you have to fight multiple bosses in a row — especially when they get to act before your party.

Usually, the solution to this kind of problem is to grind until you can put up a fight. Just like its other features, Dark Rose Valkyrie somehow messes up on this element. Instead of using a system where you spend one point to increase a character’s stats, the amount varies by character. Since the cost goes up at certain points, you only get to improve two things each time — unless you get extra stuff from beating missions. You also have the ability to upgrade your TCS; however, this can become very time-consuming when you have to do it for eight people. To top it off, the idea that its max level might match your team’s makes it feel like an annoying chore since the aftermath doesn’t lead to fulfilling results.

Based on the way these systems were executed, Compile Heart might’ve ended up in a situation where it failed to make its complex ideas work well together. Whether it was the result of a lower budget than usual or a tight deadline, there is a feeling that Dark Rose Valkyrie was an ambitious project with a rocky development cycle. 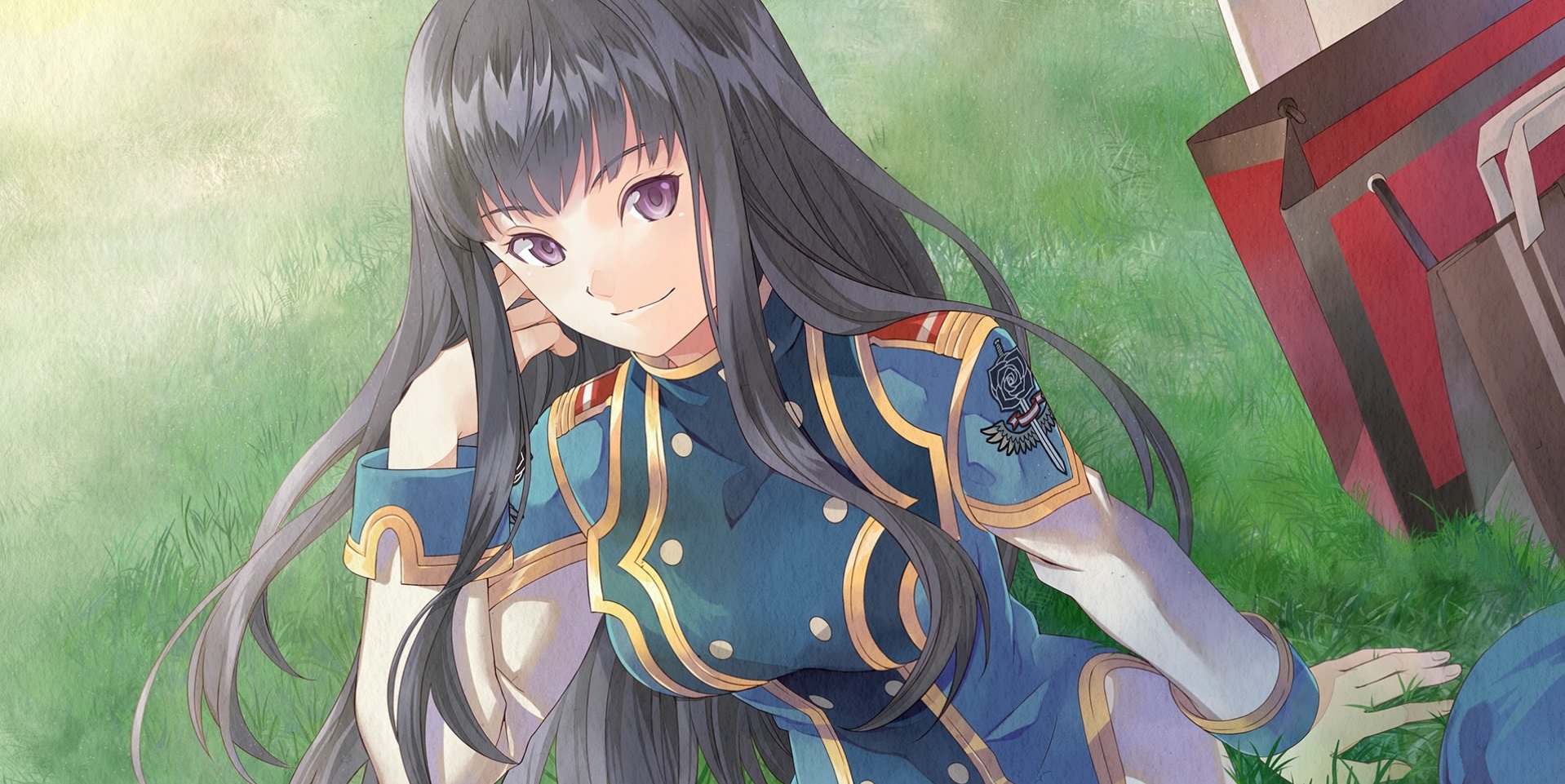 If it weren’t for Asahi’s subordinates being entertaining when I was chilling at the main base, my time with Dark Rose Valkyrie would’ve been a soulless ordeal. This is thanks to the game having segments where you get to bond with your comrades.

The female cast consists of the rich person that’s learning about the middle class, the serious soldier who secretly loves cute mascots, the tomboy who sees you as an older brother, the member who loves traditional Japanese things, and the shy one. They may fall into character archetypes we’ve seen before, but Miyajima’s writing manages to give the gang their own charm when you learn about their backstories and motives.

Since you get to interact with them before doing any missions and/or major quests, they were able to keep things interesting before dealing with Dark Rose Valkyrie‘s rough spots. Combined with Fujishima’s ability to create characters with cute eyes that complement their smiles, the game’s visual novel-like segments gave off a wonderful atmosphere. 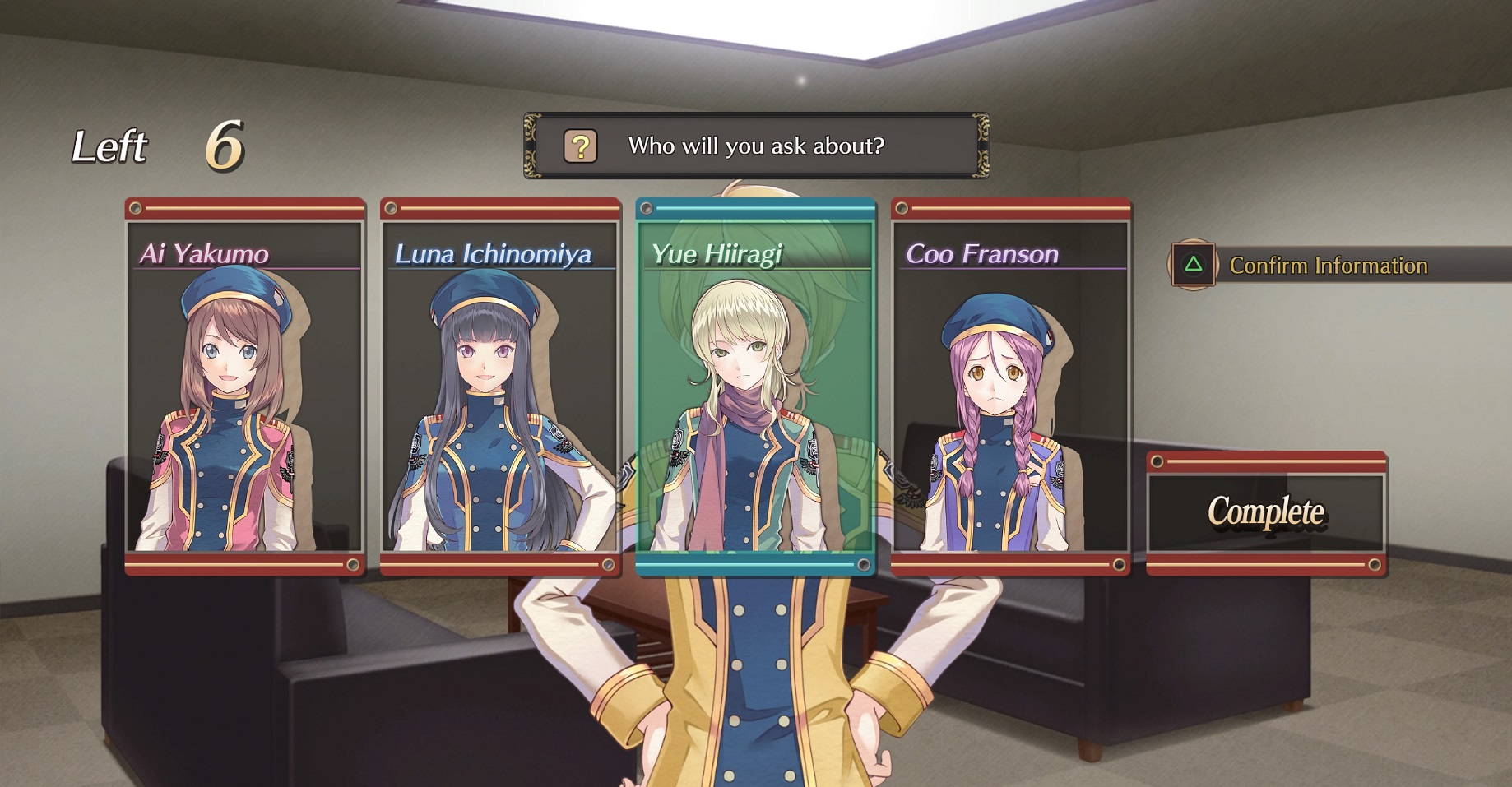 Aside from getting to know the characters better, the game throws players into a situation where they have to find a traitor, then expose the liar through a series of interviews. Since the culprit is random in each playthrough, there’s this sense of insecurity as your strongest party member might turn on you later in the story. Of course, this segment has its fair share of problems.

The main one is that the total number of questions you can ask each girl is based on their trust levels, instead of it being infinite. Even if you try to reset the game to view all of the possible answers, the topic for interviews is random so you have to hope that you get the same questions when you reload your save data. Luckily, you have two features that can help you determine the accuracy of the information given. One lets you test the girls’ answers on the spot and the other helps you gather intel on them before the interrogation begins. They may have their own limitations, but it can slightly reduce the frustration from testing out each reply.

Considering that this is one of the crucial elements that affects Dark Rose Valkyrie‘s ending, it’s a shame that the interviews have many unnecessary restrictions. It doesn’t help that you have to wait until the end of the event to see how you did in the previous one, instead of seeing the results right away. 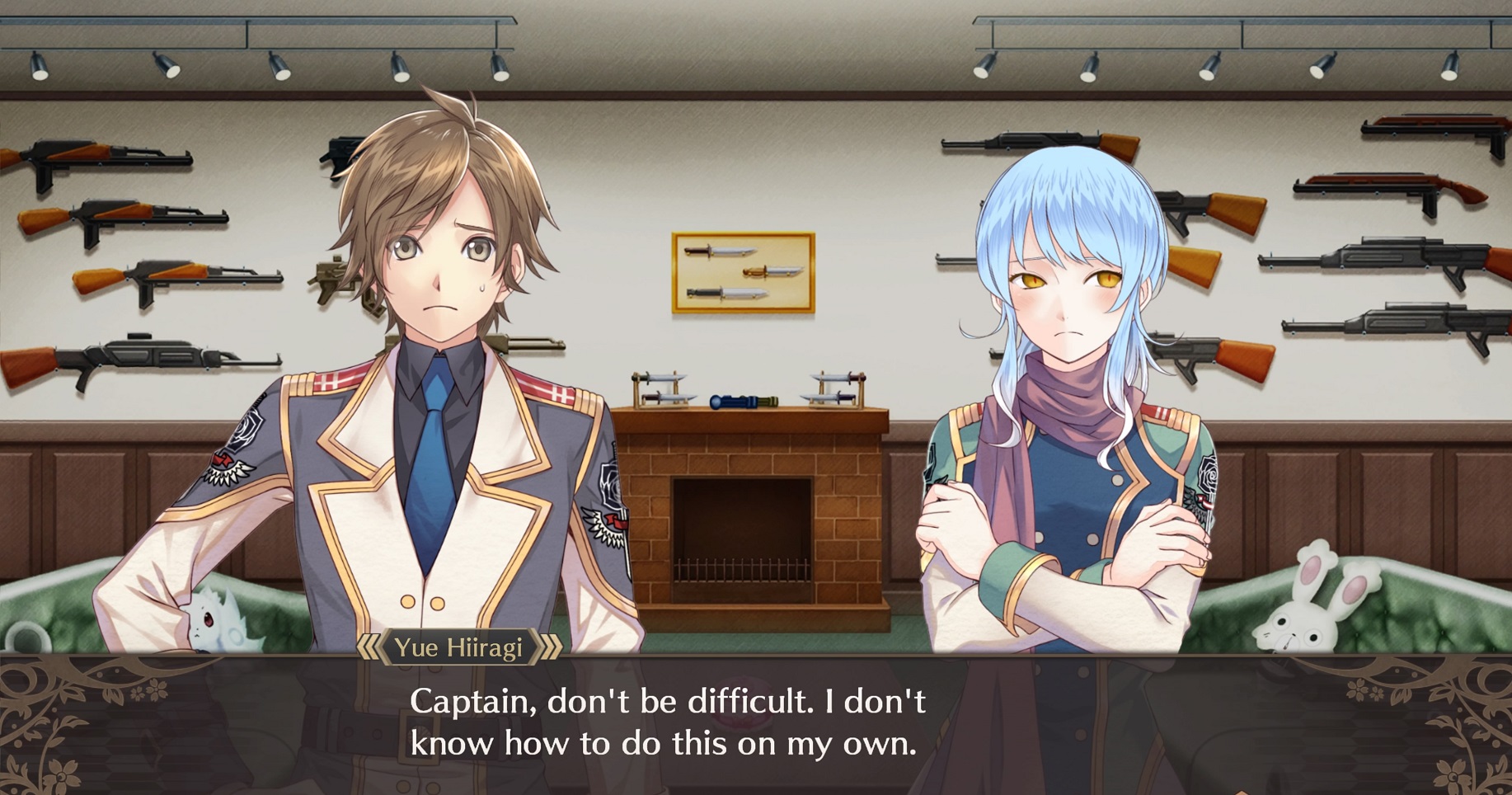 All in all, overcoming Dark Rose Valkyrie‘s content is similar to going on a long family road trip while yelling “Are we there yet?” to your parents. The only difference is that the destination will leave you disappointed.

Even though Compile Heart had a couple interesting ideas with this game, its execution failed to bring out its true potential. And despite having two Tales of series members on board, their involvement couldn’t stop Dark Rose Valkyrie from wasting people’s valuable time. At least Fujishima’s character designs continue to look gorgeous.