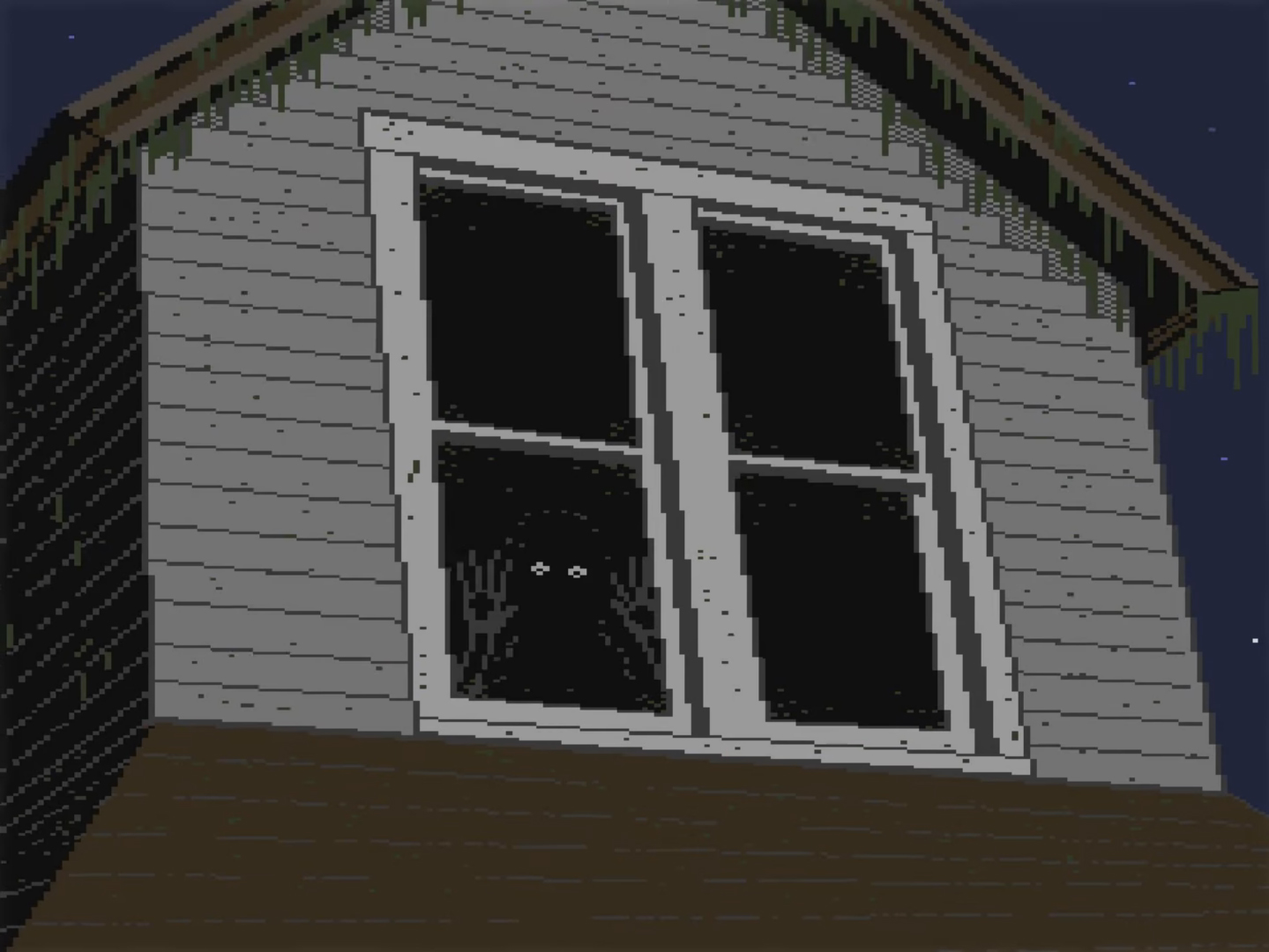 I am probably a horror game maker’s favorite sort of person. I scare very easily when it comes to video games. Movies, not so much, but video games, man, they get me. Like, was Resident Evil 4 supposed to be super scary or is that sentiment just reserved for wimps like me? The point is, I spook easily.

So jumping into Dark Fear had me worried. Why subject myself to this sort of thing?! Luckily, this wasn’t too much of a BOO! type of horror game, but, instead, it’s a game that sets an uneasy tone to get to the core of what it means to be frightened. It’s just a shame the mechanics get in the way of that. 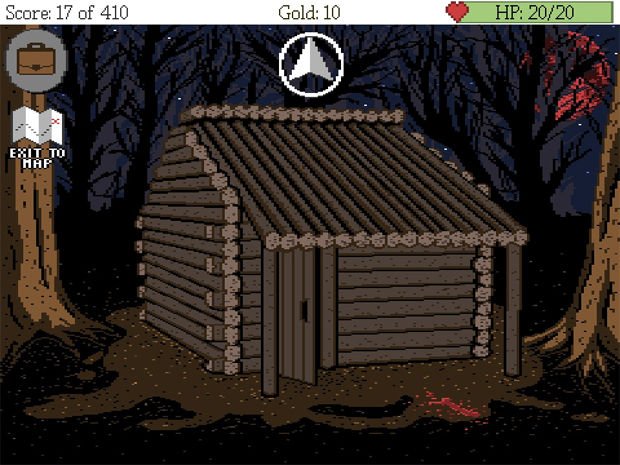 Dark Fear starts the player out in a state of confusion; waking up alone in a shed in the middle of an unknown area. From there, it’s up to the player to piece together how they got there, what their purpose is, and just what the heck is going on. While some of the plot is revealed to the player through interactions with the environment or by reading over notes and journals, most of it comes from NPC characters reciting mini-essays about what exactly is happening.

There’s a lot of dialogue to read here. It’s written well enough, but just feels tedious at times when multiple characters have dialogue-heavy interactions back-to-back. The story itself is enough to carry the player from one event to the next, but doesn’t do much to cement itself as something other than “mildly interesting.” It’s also not long enough to really lose the player; my playthrough clocked in at just under four hours.

As to whether or not it’s scary, well, sort of. Dark Fear does throw in some jump scares, but they aren’t overused to the point of feeling cheap. There are only a few and they definitely made me jump. A lot of the “fear” comes from a creepy atmosphere and some great imagery. Seriously, there are some scenes in Dark Fear that really stuck with me and skeeved me out. I shudder even now just thinking of them. These scenes work because the stellar art and the plot implementations behind the image combine to create a general feeling of uneasiness. Unfortunately, the gameplay itself often ruins that feeling.

The gameplay is a mixture of solving environmental puzzles, managing inventory, and fighting battles. The environmental puzzles are largely straightforward, with one exception that had me clicking on everything with each of my inventory items until something finally worked. It wasn’t so much of an “a-ha!” moment as an “ugh, whatever” moment. Other than that one obtuse puzzle, the rest were logical and usually satisfying. The intro screen recommends a pad and paper to help take notes but trust me, if you’ve got any short term memory at all, you’ll be fine. I did have to brute force one puzzle, but it was color based and I’m colorblind so most people will be just fine.

Fighting is, as you might expect of a game designed for mobile devices, completed with one-button and is timing based. Fights are turn-based and the player has a handful of options at their disposal. Attacking causes an arrow to bounce back and forth on a bar – if the player gets in the center area, the attack does 100 percent damage. Outside of that, the attack does 75 percent. If the player completely blows it, the attack misses. The range for each percentage doesn’t change, even when the weapon does. It would have been great to give the various weapons more personality and have the conditions change even a little, because the homogeneity makes the battles feel very same-y.

The other options are to flee, use a potion, or defend. Defending is never worth it, so don’t even bother. It always has a 50 percent of succeeding, and if it does work, the enemy will miss twice. But since defending takes up your turn, it’s basically saying that they will miss once. I suppose it could be a last ditch effort, but since dying has no consequence, I never really saw the point. 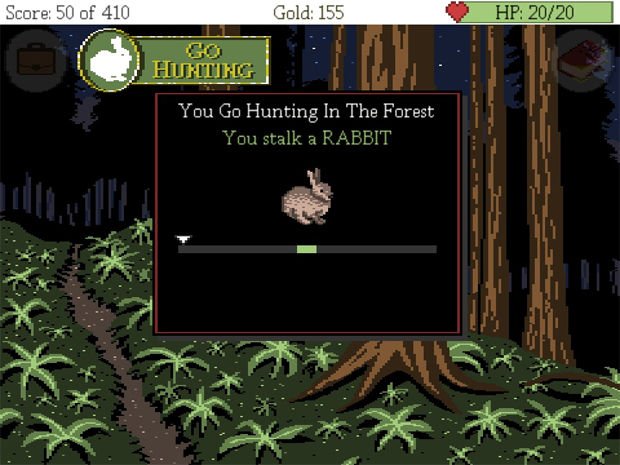 All of the battles are scripted in almost every way. It’s possible to upgrade weapons and armor over the course of the journey, and each battle essentially requires the best available equipment. Otherwise, fights will be a drawn-out slog with lots of potion use. When using the best possible set of equipment, every fight feels exactly the same. Attack over and over again until the thing dies. Maybe you need to use a potion in order to survive, maybe not. Later, the player gains access to a crossbow and can use different ammo. Bosses are almost always weak to a specific bolt type, so battle become: attack twice, use the special ammo, repeat until dead. Almost every time, I survived with just a scrape of health left. Every battle feels exactly the same.

Earning money to get the equipment is even worse that battling. The only way to get money is to win battles, which are finite, and to go hunting for pelts. Hunting opens up in certain areas after clearing it of the scripted battles. While hunting, the player is presented with a bar similar to the fighting bar. This time though, the player must click whenever the arrow goes over a green bar. The animals that are rarer have more green bars to click on. That’s it. Clicking during a certain point. Over and over again. I would say that over the course of the game I earned about 200 – 300 pelts. Certain pelts are required for creating new armor sets, but the bigger takeaway is the money earned from selling them. The same thing goes for fishing, except that the fish cannot be used to make anything, only sold for money.

So fighting gets tiresome very quickly, hunting is a straight-up awful (yet necessary) part of the game, the puzzles are mostly simple, and the story is mostly told through NPC monologues. There’s not much else here, yet I didn’t find myself hating the game. Its brevity definitely helps, as if I had to do all of this for another handful of hours I might not have made it. But as a cheap and quick story-driven jaunt, it held together pretty well. The art and sound design really elevate the entire experience to something much more memorable than the mechanics may lead you to believe. 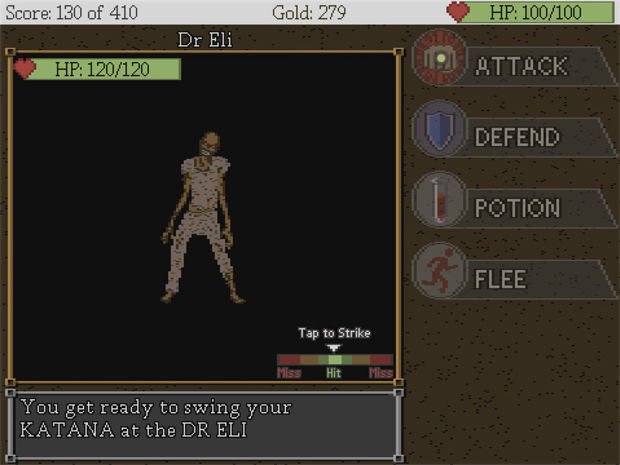 Ultimately, this is a low-cost horror game that does a lot of things well. However, the game would be better served if it were less mechanic-heavy, since the gameplay tends to detract from the tense themes created with the art, writing, and sound. While I played on PC, this is definitely a great fit for smartphones and tablets. In fact, I’d probably recommend playing Dark Fear on mobile devices, since it is clearly designed for them.