Burnout in everything but name

For the past few years, Three Fields Entertainment has been doing its damnedest to resurrect the once proud Burnout series. Starting with Danger Zone in 2017, the team started small by recreating “Crash” mode and figuring out car physics. The sequel in 2018 expanded the scope of the environments to include outdoor locations and a lot more cars.

Now everything has come full circle with Dangerous Driving. Eschewing crash to focus on all the other modes from Burnout, Dangerous Driving harkens back to the closed circuit courses that made Criterion Games a household name. Face-off, Police Pursuit, Road Rage, and Eliminator, it’s all here. This really does feel like the Burnout of old.

While a few technical issues hold it back from true greatness, any fan of EA’s once glorious franchise should not pass this up. 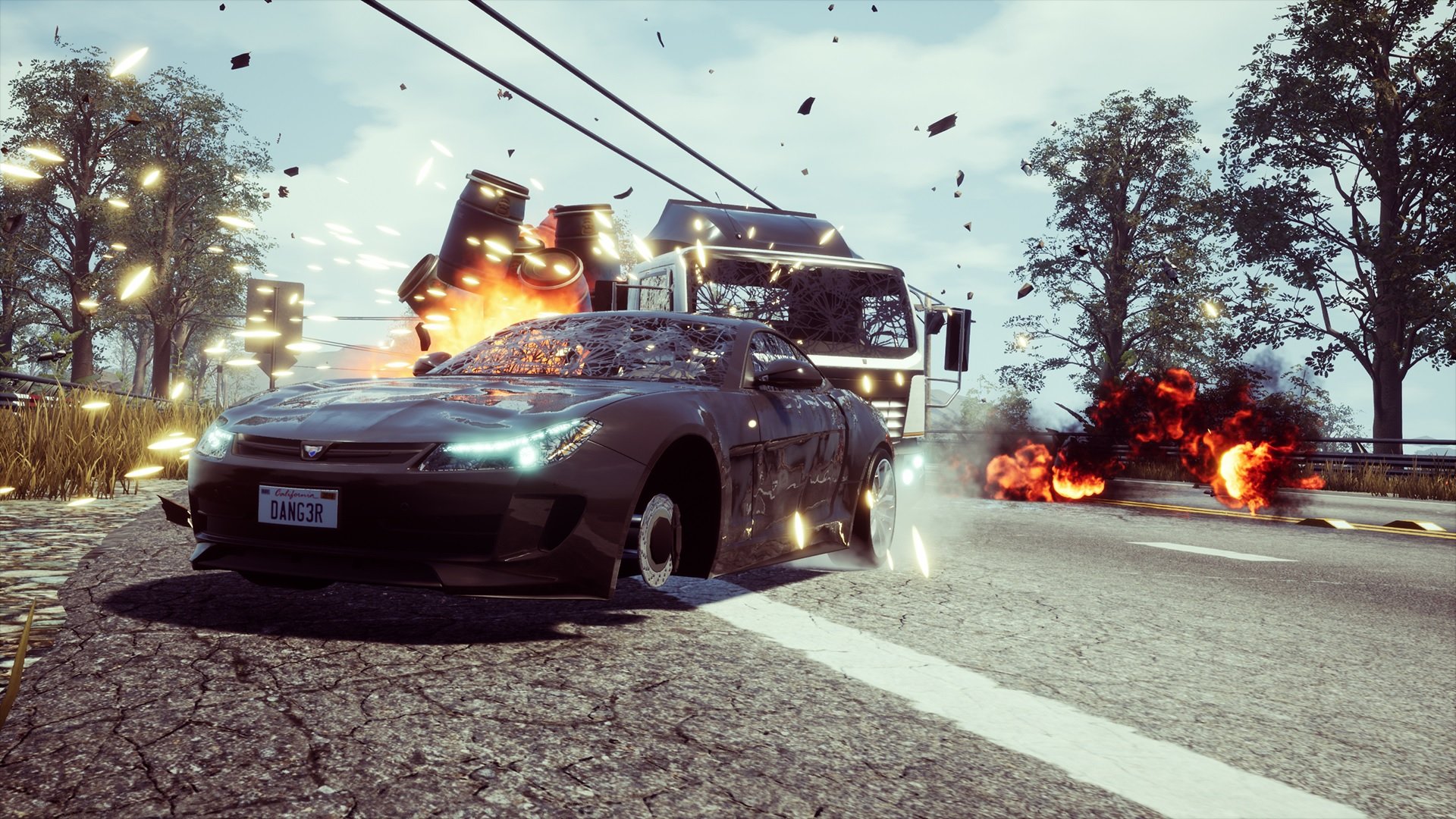 Dangerous Driving may not be the most exciting name, but it pretty accurately describes what this game is about. In exactly the same vein as EA’s Burnout, Dangerous Driving tasks players with throwing caution to the wind and driving like a maniac. Put the pedal to the metal, merge into the oncoming lane, and speed in excess of 150 mph! There’s no way to win if you’re taking a Sunday stroll.

The basic gameplay of Dangerous Driving is that of an arcade racer. You’ll pick a car, use an accelerator to rev up, and compete against opponents to get first place. The twist comes in that you’ll constantly be rewarded for smashing your opponents or pulling off risky maneuvers. Barely miss that car? That’ll earn you boost! Landed an insane jump? More boost! Plowed your opponent into a semi? BOOST! It’s simple to grasp, hard to master, and utterly addicting.

The career mode will see you progressing through different classes with multiple events to participate in. While standard race is the most prominent, Dangerous Driving recreates a lot of fan-favorite Burnout game types. “Road Rage” is the clear winner, a mode in which your only goal is to rack up as many takedowns as possible, but some new additions to the old Burnout formula make “Eliminator” a real thrill.

The various classes you’ll play in are focused on the different types of vehicles you have at your disposal. You’ll start off with a generic sedan before eventually progressing up to a Formula-1 car that zooms at speeds unheard of. While earning medals for finishing events, you’ll even unlock specialized forms of each vehicle tailor-made for different event types.

These specialized vehicles are earned from specific events, though you aren’t locked into a linear path for each class. After the first event, you’re given two-to-three other choices that almost let you customize how you’re playing the game. If you love Road Rage and want the “advanced” version of a car to help you, skip all of those events and go straight for races. This will get you to the “Face-Off” event required for that car unlock with ease. It’s a nice touch that can cut down on tedium if you just do not gel with a specific game type.

That being said, I don’t see how you could dislike any of these. While normal races might be a little standard, every game mode offers something completely unique from the last. “Pursuits” might sound like Road Rage, but the way in which you need to approach your rivals is wholly different from simply slamming them into a wall. You’ll need some patience and a keen eye for traffic to land hits and whittle down rival health without crashing yourself multiple times. 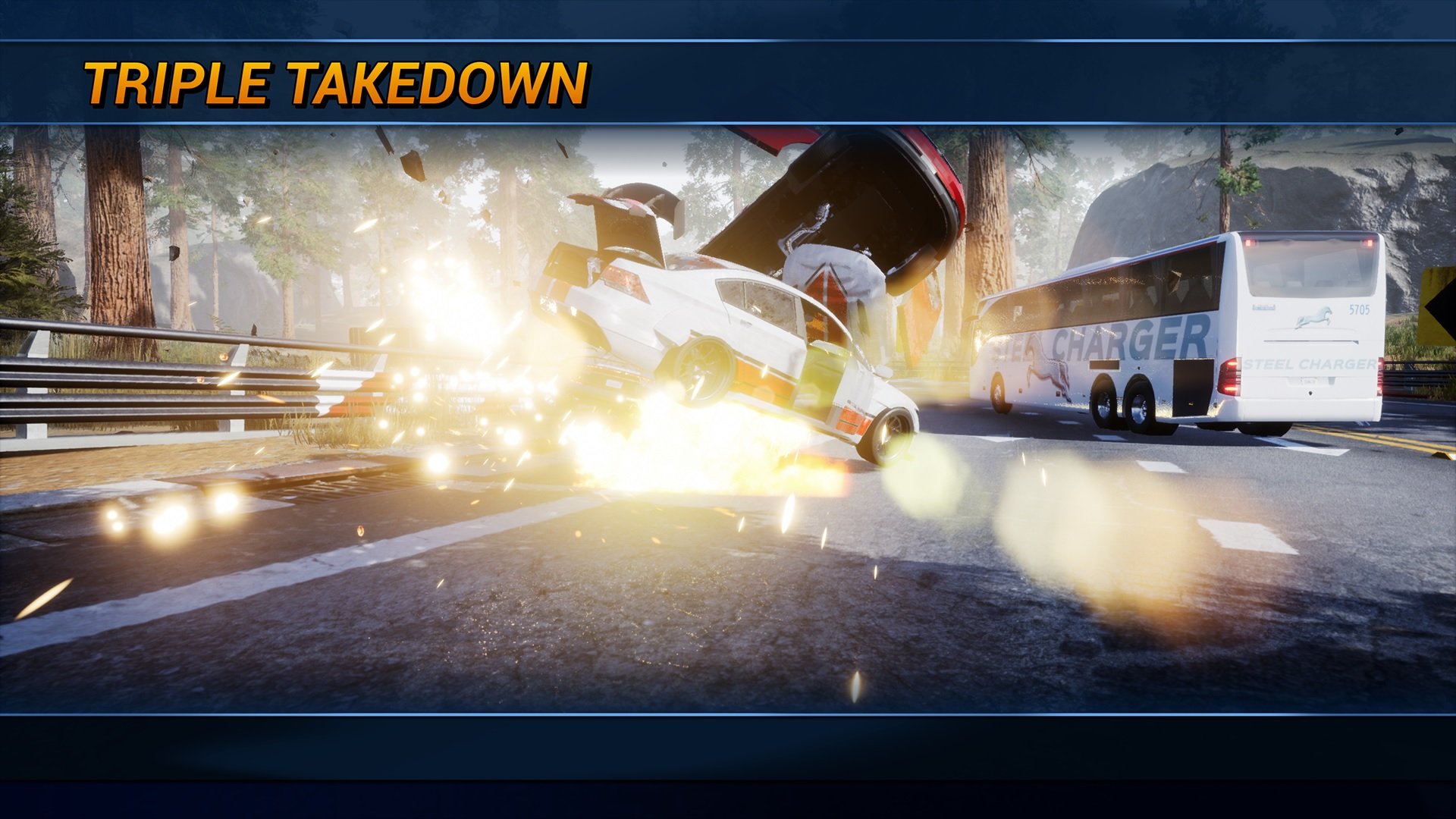 While the speed may look intimidating, every car handles wonderfully in Dangerous Driving. Having perfected its craft over multiple games, developer Three Fields Entertainment has just about captured the same handling model that Burnout had. Sedans have a little bit of weight to them, while sports cars have ultra-precise turning and brakes. The whole SUV class even feels like you’re driving a tank, which is great.

Boosting is also handled the same as in Burnout. You’ll earn it from being crazy on the roads and then unleash it by holding the designated button. A slight change from Burnout is that you now have four boost meters, but you’ll still need to earn them by performing stunts, such as smashing opponents into walls. While a brake button exists, it’s mainly there to assist you in drifting. It all feels very much like how you’d want a Burnout sequel to play.

Not everything is the same, though. A new addition to Dangerous Driving is that of persistent crashes. What this amounts to is that any time you take down a rival or crash yourself, the vehicle will remain on the track for the duration of the race. While it doesn’t really affect shorter races, “Eliminator” in particular can become really brutal by the fourth or fifth lap. You’ll be navigating a race car graveyard while trying to maintain your position and nab your medal. It’s an insane thrill. 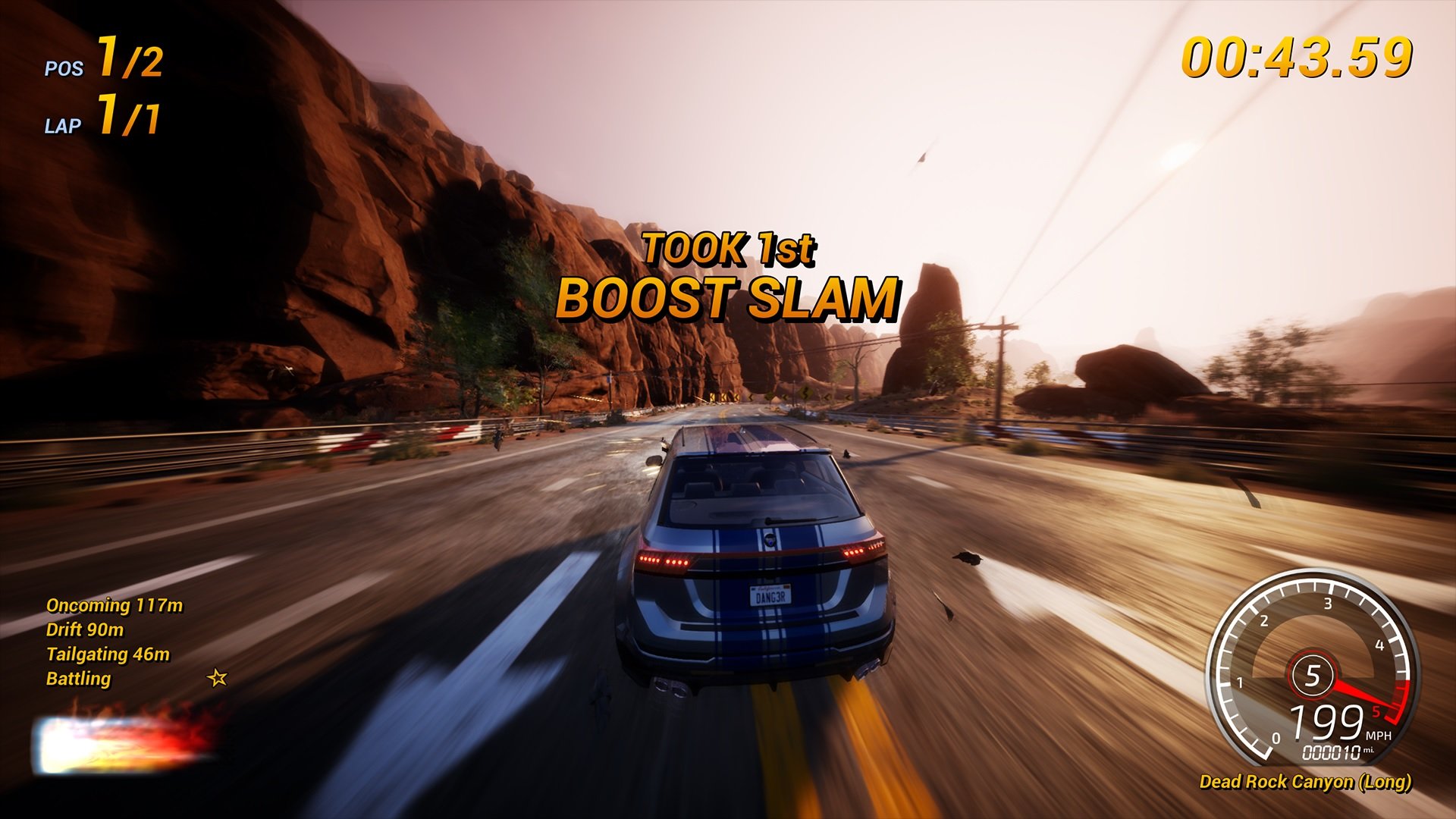 What isn’t so much of a thrill are some of the technical issues that Dangerous Driving has. While thankfully not as detrimental as Danger Zone 2’s problems, they do sting a bit while going for golds. One of the most frequent glitches I encountered was that of the rubber-banding AI system malfunctioning. While it will never not be annoying to be driving unopposed for minutes at a time, then suddenly have a car right on your ass, there were times where I’d see rivals zip past me at 1,000 MPH and get a lead of about 75 seconds almost instantaneously. Typically a retry or car crash would then correct this.

I also had some instances of crossing the finish line on the final lap and the game not registering the race as completed. I’d be stuck in a loop of driving down a blank road with no rivals or traffic and nothing else to do. Retrying the race normally fixed this, but it becomes especially aggravating when it’s the final lap of a three-race GP series and you’re forced to replay 20 minutes of racing.

The takedown camera would also mess up occasionally. I can excuse my car or rivals flying through the environment because that doesn’t hurt gameplay at all. What does bother me is when I crash, then get put back on the track directly behind a wrecked car. Since the game doesn’t let you move for a second or two after respawning (in an effort to stop you from accidentally crashing), you’ll sometimes spawn in loops where you crash three times in a row with no chance to prevent it. 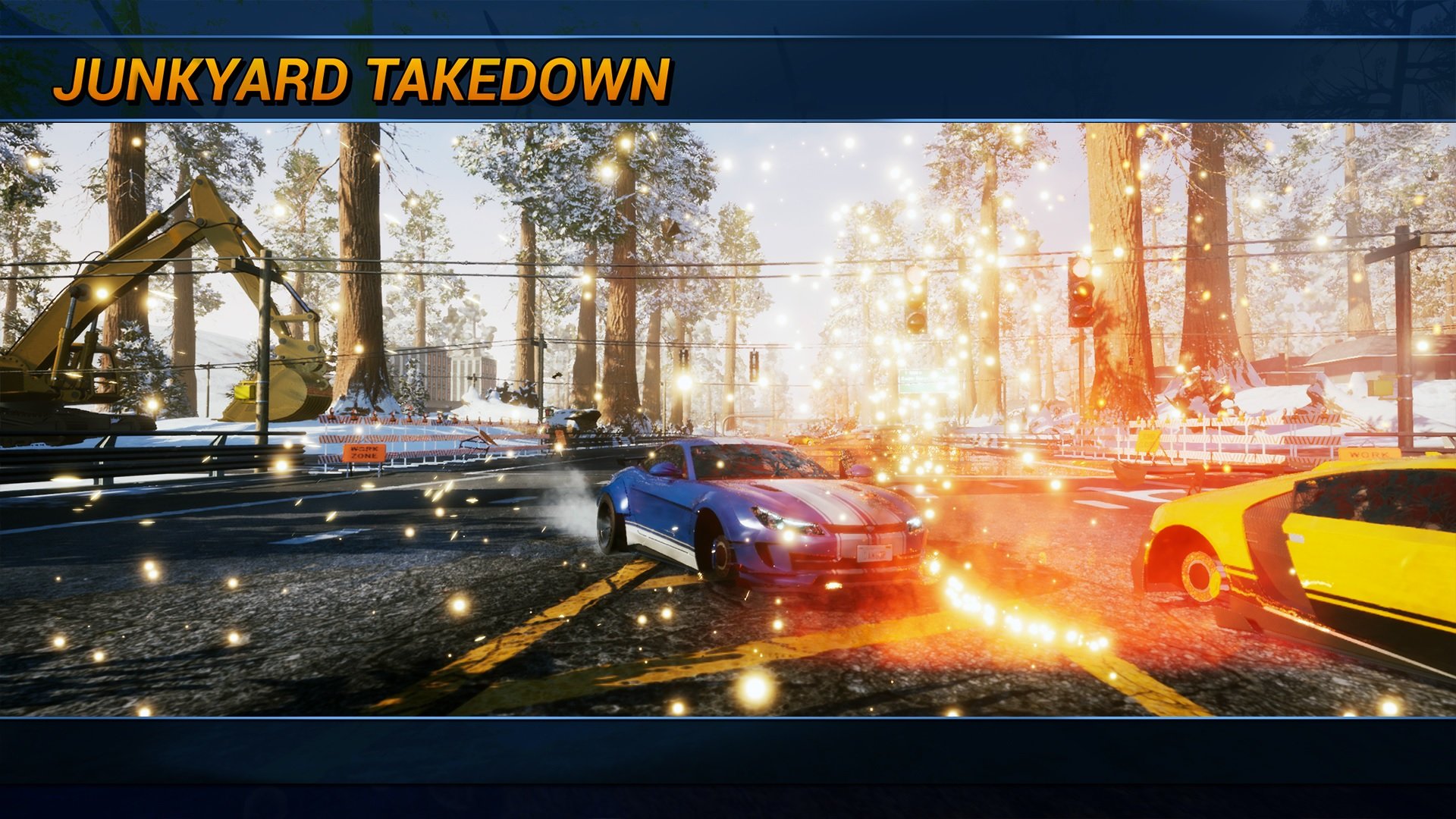 Still, the game typically doesn’t feature these errors. The final few events seem to be a bit more prone to glitches than the rest, but they don’t crop up for roughly 90% of the experience. It sucks they are there, but everything else about Dangerous Driving feels incredibly polished. That extends to the presentation, which is a huge step up from Danger Zone 2.

Utilizing the latest in Unreal Engine technology, Dangerous Driving runs at a lightning fast framerate with some beautiful particle effects in play. If you have a powerful enough PC, you can crank this bad boy up to 4K and really give your eyes a treat. On consoles, getting performance depends on whether or not you have a PS4 Pro or Xbox One X. If you have the base consoles, you’ll be stuck with 30 FPS, but their enhanced brethren get 60 FPS and boosted resolutions. PC can uncap the framerate – though that seemed to trigger the rubber-band glitch more often.

I’m mostly just in awe of how much better the car modeling looks. I wouldn’t call it realistic, but doors fly off, windows crunch, and wheels get displaced just like the Burnout of old. This is precisely the type of stuff I wanted to see in Danger Zone 2 and I’m happy we’ve finally got there. I’m also in love with how clean the presentation is. 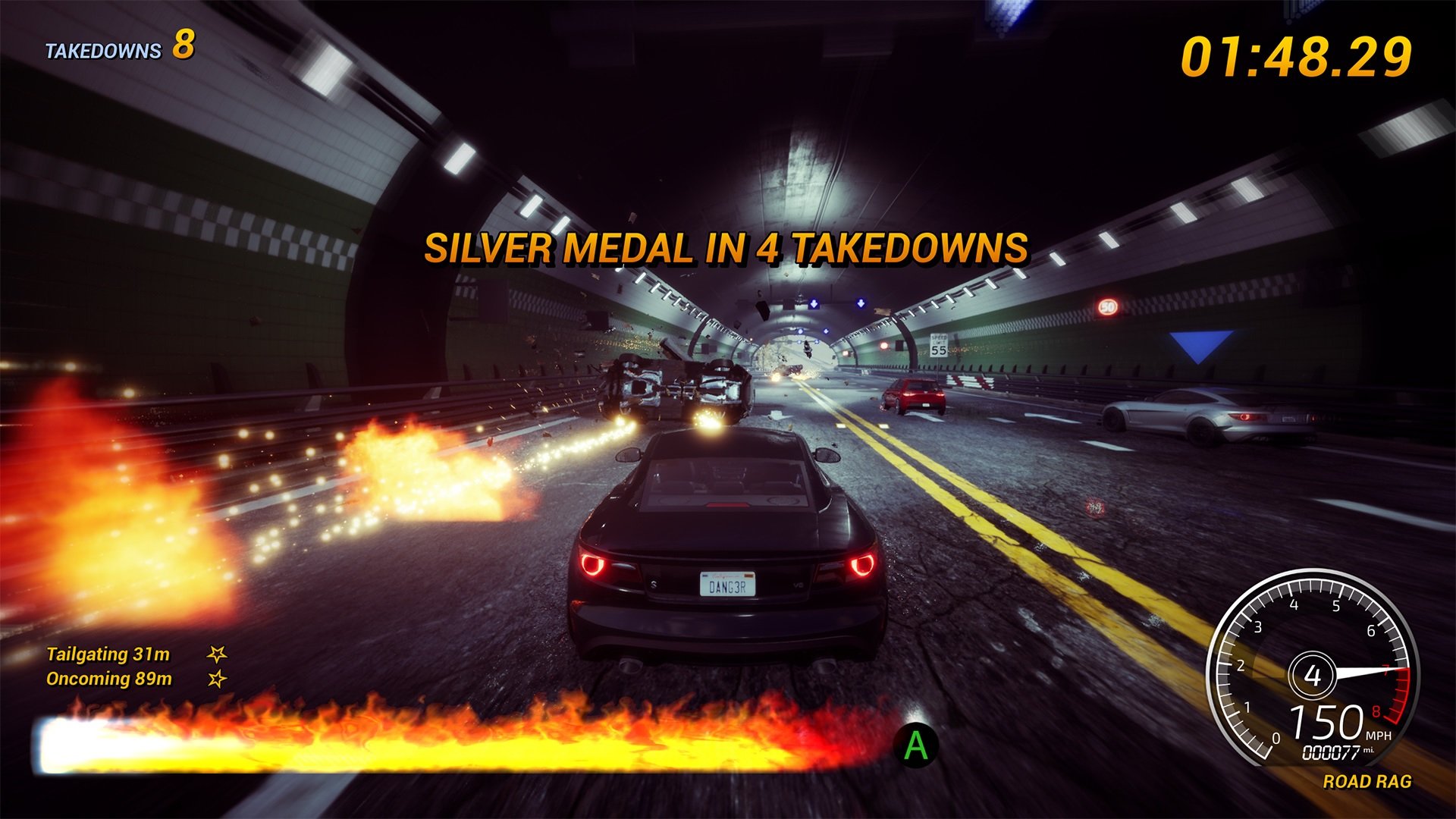 About the only thing you could say is a letdown, presentation wise, is that there isn’t a soundtrack included. Three Fields Entertainment is indie, so it couldn’t license out tracks for you to speed to. A cool workaround comes in the form of Spotify integration, but it requires you have a Spotify premium account. If you do, you’ll be able to control your playlists from within the game and finally play Kenny Loggins’ “Danger Zone” while crashing cars. Thank god!

All in all, Dangerous Driving is a marked improvement in basically every facet over Danger Zone 1 and 2. This is Three Fields firing on all cylinders and giving Burnout fans the experience they’ve been craving. While a few technical hiccups stop this from achieving greatness, you really shouldn’t sleep on this if you’re a fan of arcade racers. Dangerous Driving is the real deal and any Burnout fan would be crazy to skip it.