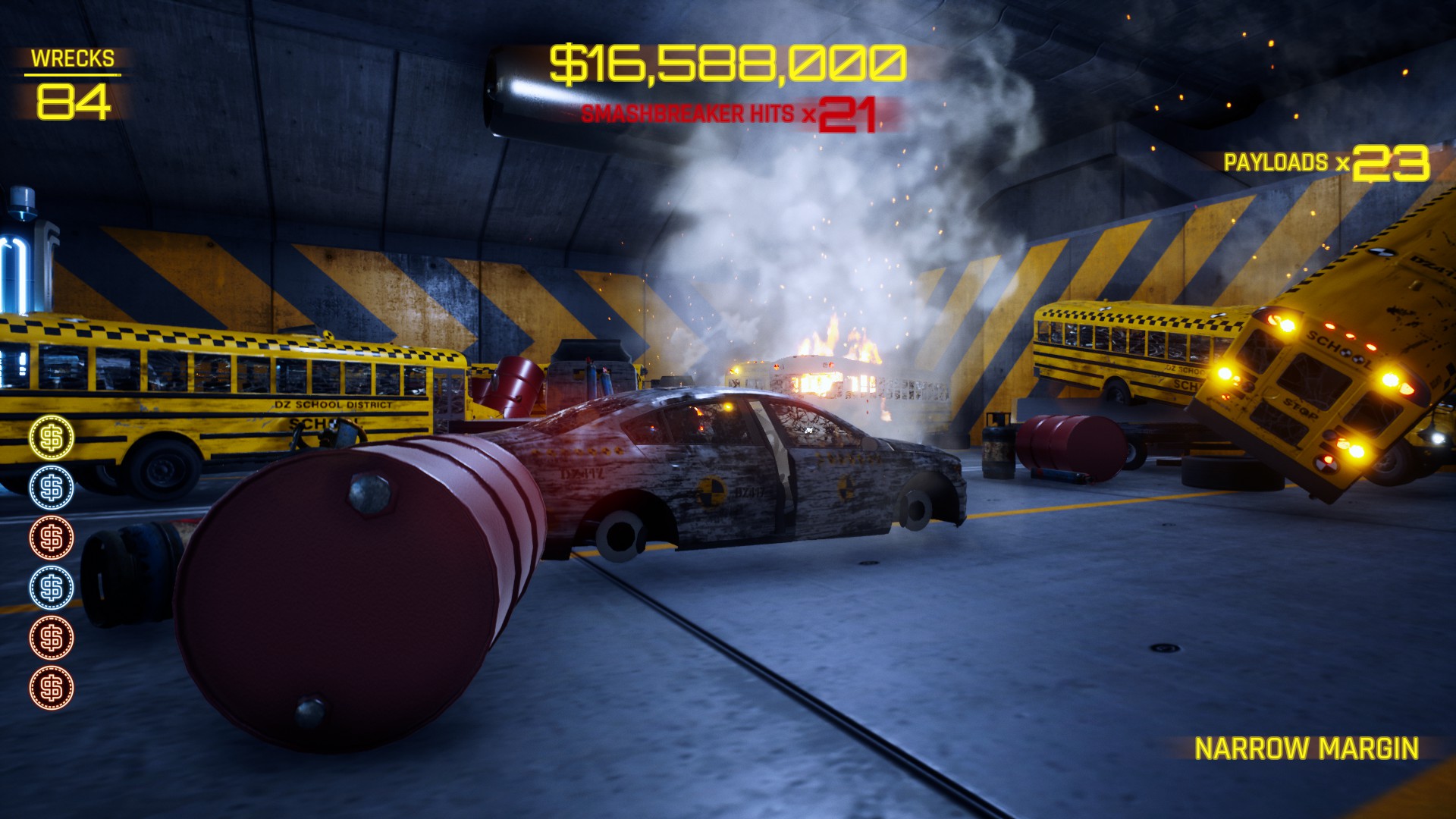 Highway to the Danger Zone!

Before computer technology advanced to the point that we could realistically render automobiles, racing games took on a much more simple approach to driving. You didn’t have to worry about clutching or shifting and most of the action involved simply flooring the gas pedal and turning in time with the track. Times have definitely changed, but Criterion Games recaptured a lot of that early arcade appeal with its Burnout series.

Since EA has basically let the series die, it has turned to Three Fields Entertainment to sort of resurrect the gameplay found in Burnout. Being led by a couple of the founders from Criterion Games, Three Fields has introduced the world to Danger Zone, a game about crashing cars and causing mayhem.

Does Danger Zone reclaim the crown, or has Three Fields crashed and burned before getting out of the gate? 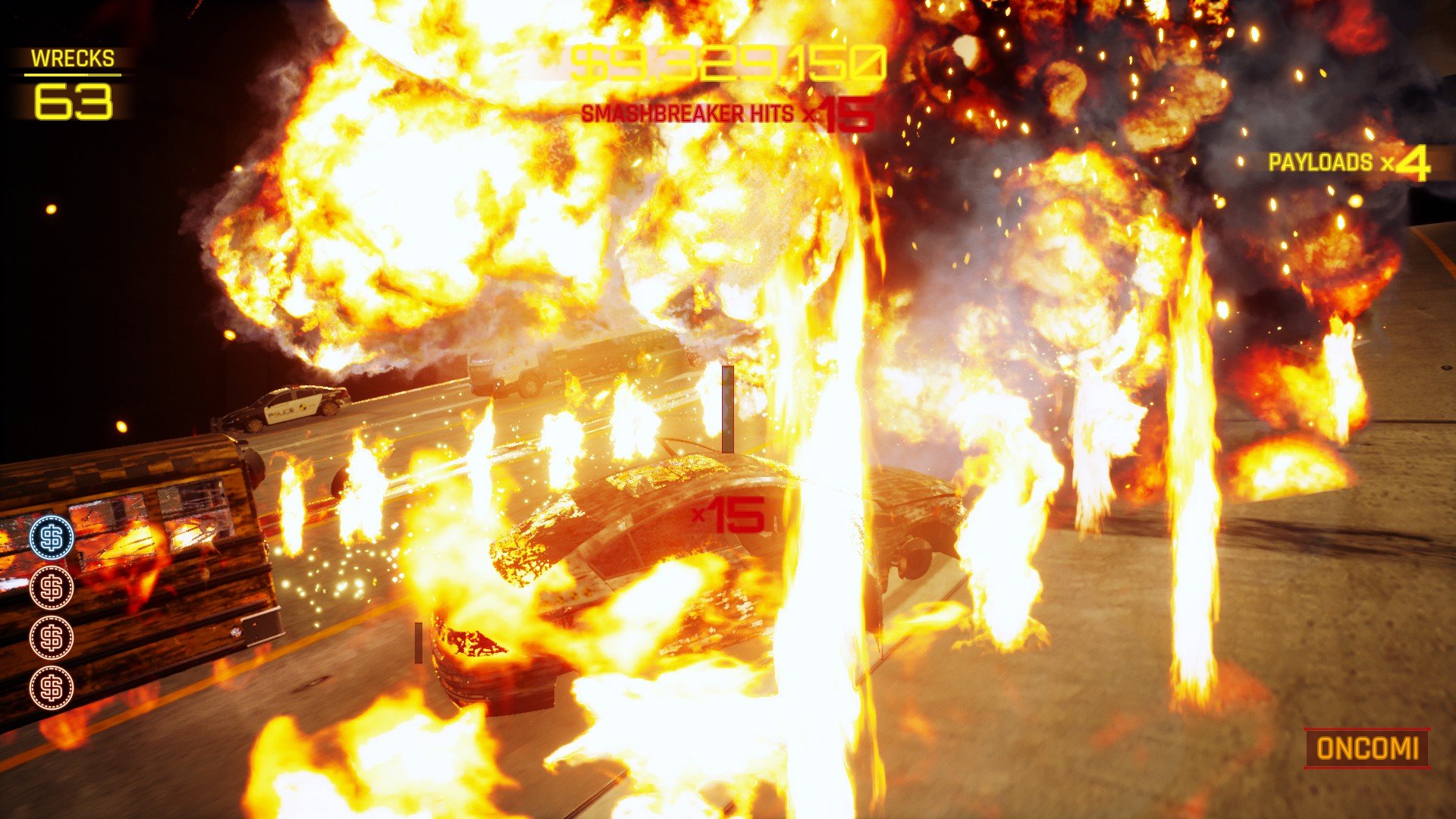 The world of Danger Zone puts you in control of a white car smashing its way through simulations of traffic, effectively recreating Crash Mode from Burnout. There isn’t a lick of racing or multiplayer to be found, sadly. Everything you do takes place in some sterile environment that looks like a mixture between a crash test zone and Tron. Force fields generate cars out of thin air and roads essentially float on nothing; you aren’t jumping into Danger Zone to see a realistic representation of a highway zone.

While I don’t personally care for the aesthetic, the claimed reason behind this design choice does hold true; eschewing realistic designs has allowed Three Fields to create scenarios that wouldn’t be allowed in a proper highway system. At least as far as I’ve seen from the US, most roadways aren’t built with 16 lanes of traffic crisscrossing and floating near each other.

This emphasis on greater track diversity gives Danger Zone a more puzzle-like atmosphere than Burnout’s Crash Mode ever had. You aren’t just plowing into traffic and calling it a day, but attempting to collect tokens in a proper order to maximize your score bonus and claim the coveted Platinum medal for each course. Tokens take the form of Bronze, Silver and Gold and grabbing them all on a stage will yield a high cash bonus, so it is beneficial to gun for them all.

Gathering these tokens is facilitated by using Smashbreakers, a game mechanic that is exactly the same as Burnout’s Crashbreakers. After crashing a certain number of cars and upon grabbing one of the power-ups in each level, you can press a button and explore your car immediately. This not only sends other cars flying, but slows down time and allows you to steer your vehicle through the air. Later levels will see power-ups littered all over, so sometimes you can end up feeling like you’re in constant slow-mo trying to careen into cars.

Along with Smashbreakers comes traffic checking. This is where you drive up behind a car and smash into it. Some levels start you behind a bunch of cars and require you to direct them into different lanes to maximize damage while you’re in a different area. It feels great to bank up a Smashbreaker by doing this before you even get to the main intersection.

That isn’t to say the handling on your car is perfect. Sometimes turning will result in flipping over and trying to slow your car to hit specific areas of traffic can result in spasms that launch you into the air. I also noticed a few bits where landing on my side would completely change the momentum of my car, but the physics don’t screw up that often. 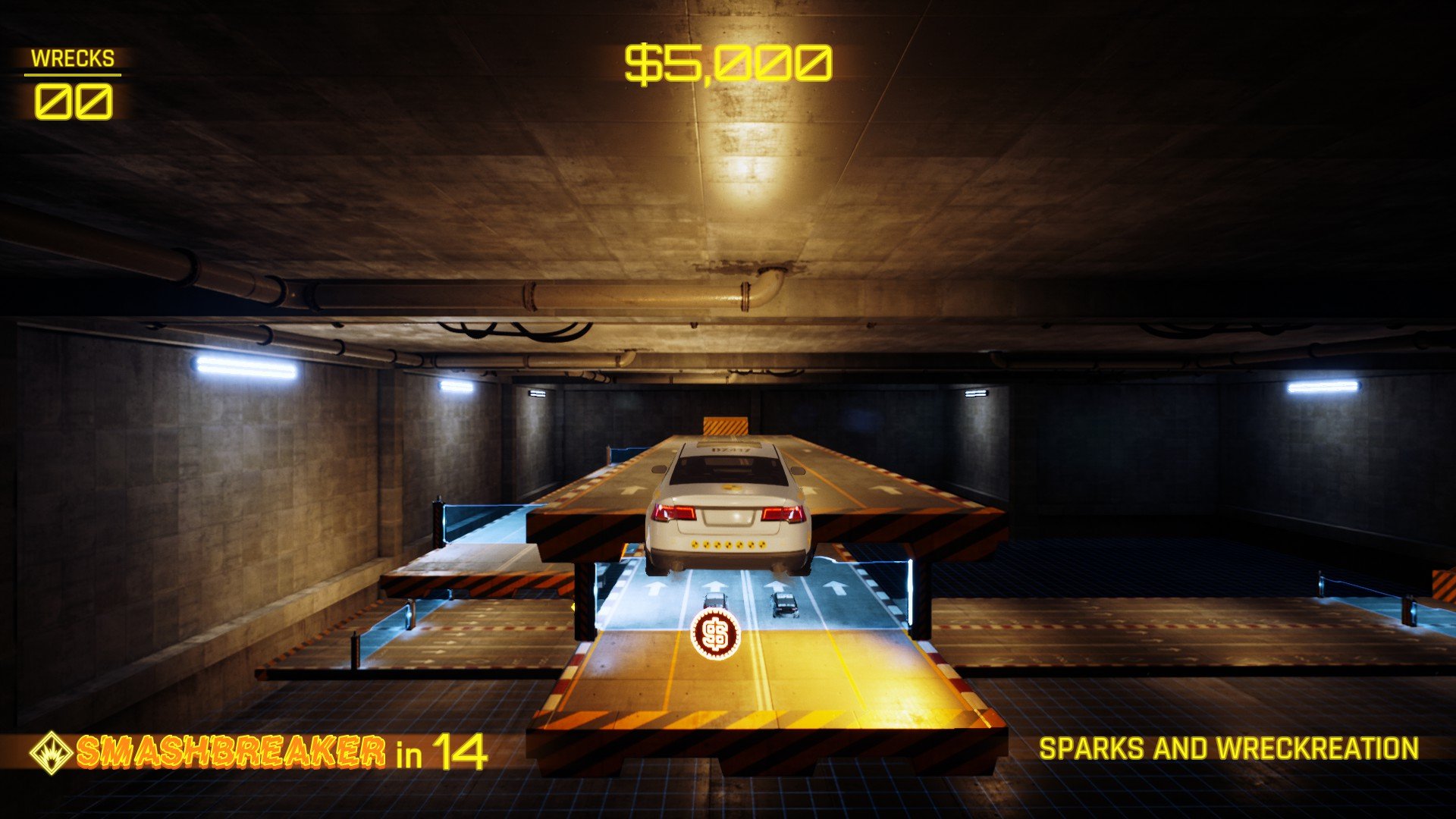 The goal is to score at least a Bronze medal on a level to progress to the next, of which there are 20 in total. Danger Zone doesn’t have a wide breadth of content, but the levels provided do offer differing scenarios that feel unique enough from each other. The game also gradually increases in difficulty before the final “section” pulls out all the stops.

Even with that slow increase in challenge, Danger Zone will take most players around two hours to finish. Getting a Platinum medal will require a much deeper understanding of how traffic is flowing, but I’m not sure a lot of people are willing to stick with a single game mode, a single car, and a single setting forever.

The sad reality is that while Danger Zone is a lot of fun, it just doesn’t have much in the way of content. The price is thankfully low enough to not feel like a cash grab, but there isn’t anything else to the experience. For Burnout veterans, such as myself, you are almost guaranteed a Gold medal on your first attempt in each traffic zone. The ever-present need for perfection is strong, but if you just go for the bare minimum, you’ll be done quickly. 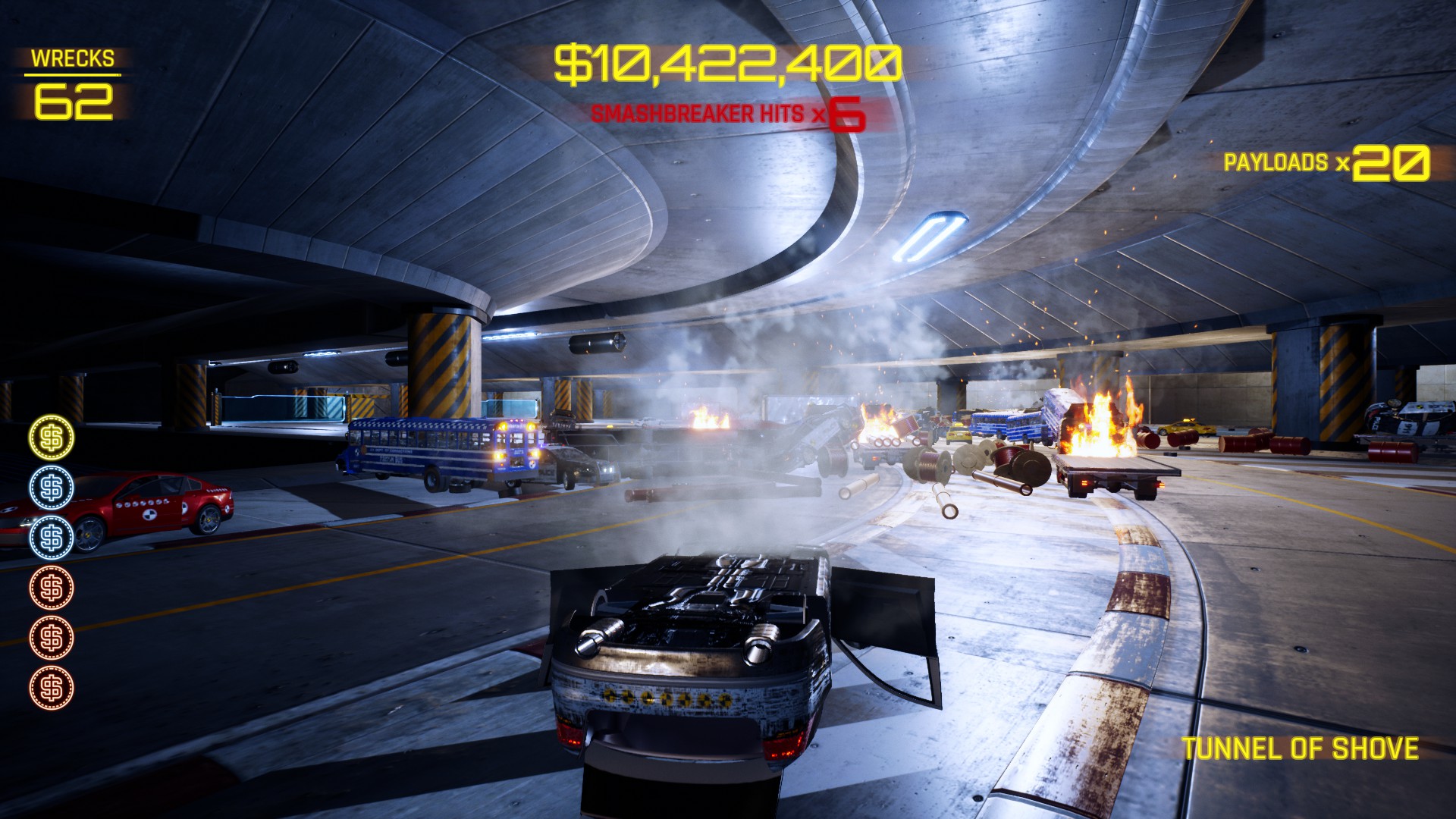 Online leaderboards do allow for some score hunting and competition, but the lack of multiplayer is a bummer. It’s forgivable since Three Fields is a small studio and the game isn’t a premium experience, but when Burnout introduced cooperative Crash Mode in Burnout 3: Takedown, the gameplay took on a whole different level of chaos. I really wish that could have come back in Danger Zone.

Mainly, my biggest complaint is just that Danger Zone isn’t long enough. I really do want more, either through more traffic venues or an expansion into regular racing and multiplayer action. For what the game provides, it is perfectly fine.

The quality present here is pretty good, as well. The graphics aren’t mind-blowing, but the game runs on Unreal Engine 4, so it has some great particle effects. Crashes result in a lot of smoke, fire, and debris, and the sound effects are spot on. Your car doesn’t sound too beefy, but it also is a standard sedan. Either way, some graphical oddities mar the experience, such as your broken car door phasing in and out of existence at times. 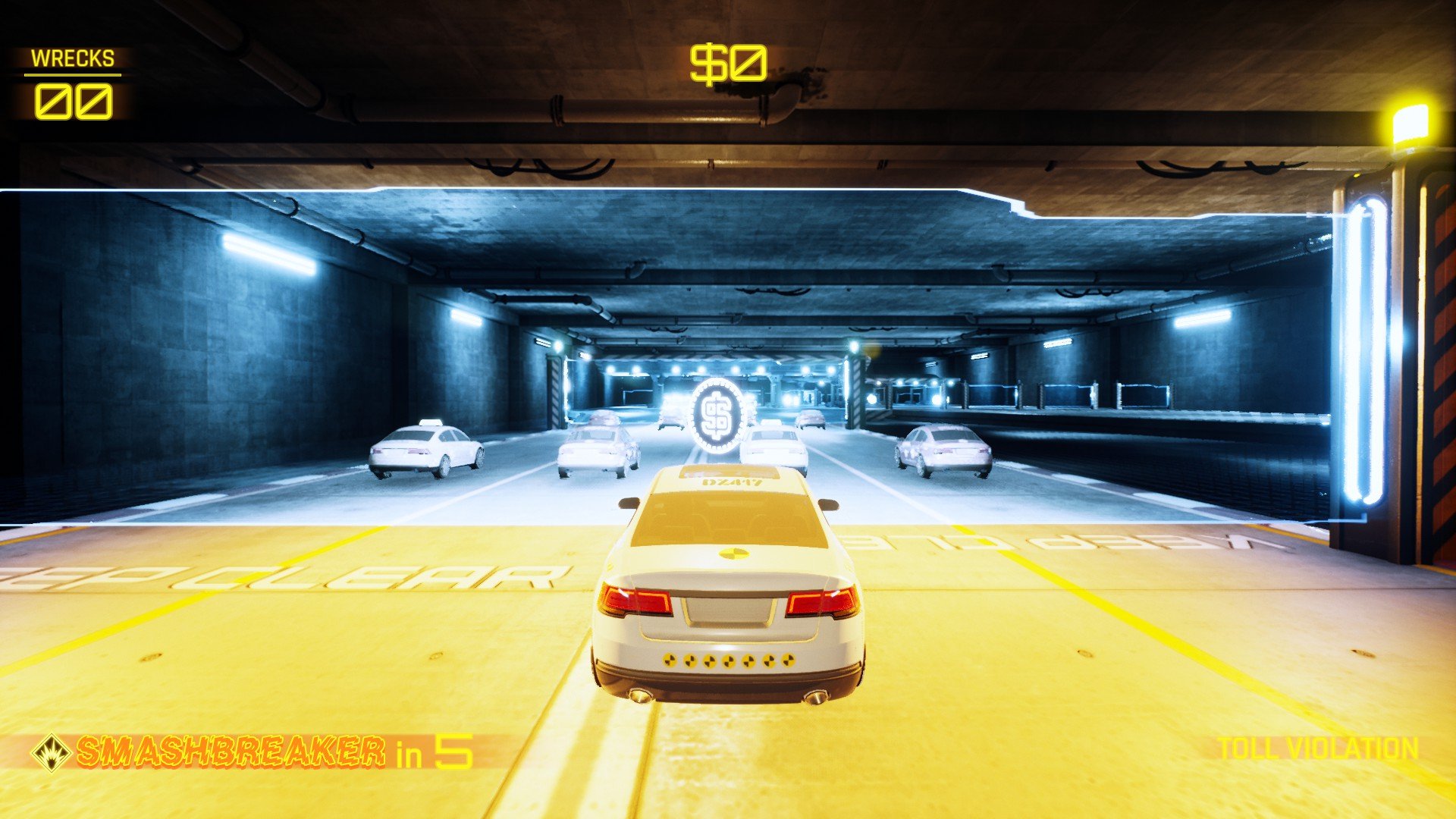 I also never saw a spot of slowdown on my system. The recommended settings are pretty low, and getting the game to run smoothly isn’t a tall order. If you must, you can cap the framerate at 30 FPS, so even low-end machines can count on a consistent experience throughout. Running it unlocked, though, can sometimes result in some ugly screen tearing, so I’d stay away from that option.

The lack of music might be offputting to some, but I’ve always loved how Burnout turned smashing metal and breaking glass into an orchestra. Those same sounds create a twisted symphony of madness in Danger Zone and the blaring car alarms cap off a beautiful run perfectly. It may be violent, but it’s beautiful.

In the end, isn’t that exactly what Danger Zone should be? It may be short, but it is ever so sweet. Hopefully we can see more of this, either with a full-on sequel or some DLC, because it’s been too damn long since we’ve had a proper Burnout game. Arcade racers need a comeback and Danger Zone would be a perfect reigning champion.