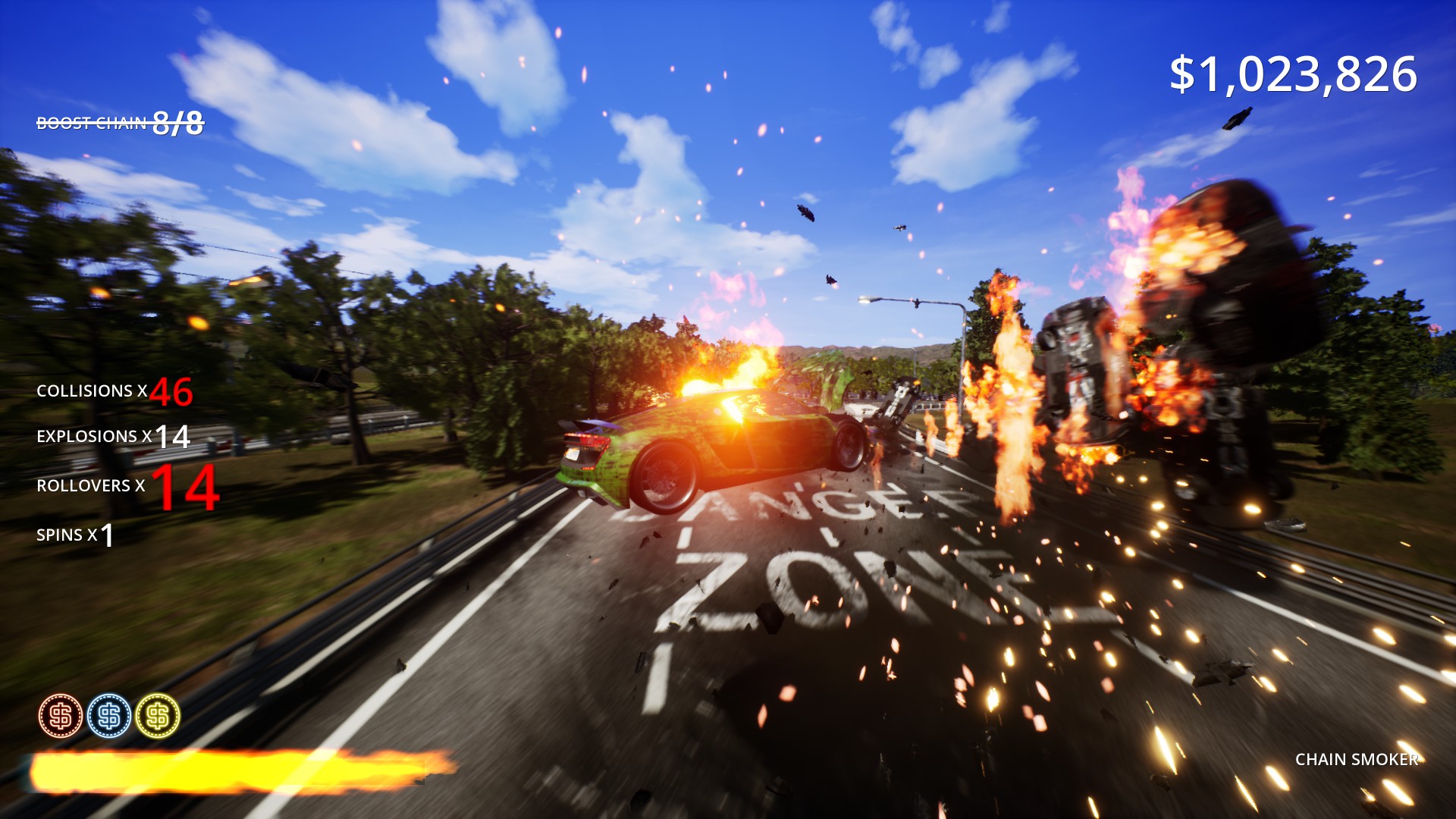 A little over a year ago, Three Fields Entertainment graced us with a sort of reboot of the Burnout series by a different name. Danger Zone, as it was called, focused on the Crash mode from Criterion’s heyday and it was a pretty damn fun time. The experience was too short and didn’t exhibit any of the polish of its forefather, but it made a great first impression and gave me hope for the future.

I was excited to hear that we’d be getting a Danger Zone 2, mostly because this could be a direct mirror of the Burnout series. The original Criterion racer was a solid tech demo, but Burnout 2: Point of Impact proved that Criterion wasn’t just developing a gimmicky racer.

While Danger Zone 2 improves on its predecessor in a lot of key areas, it sadly has too many technical hurdles holding it back from greatness. 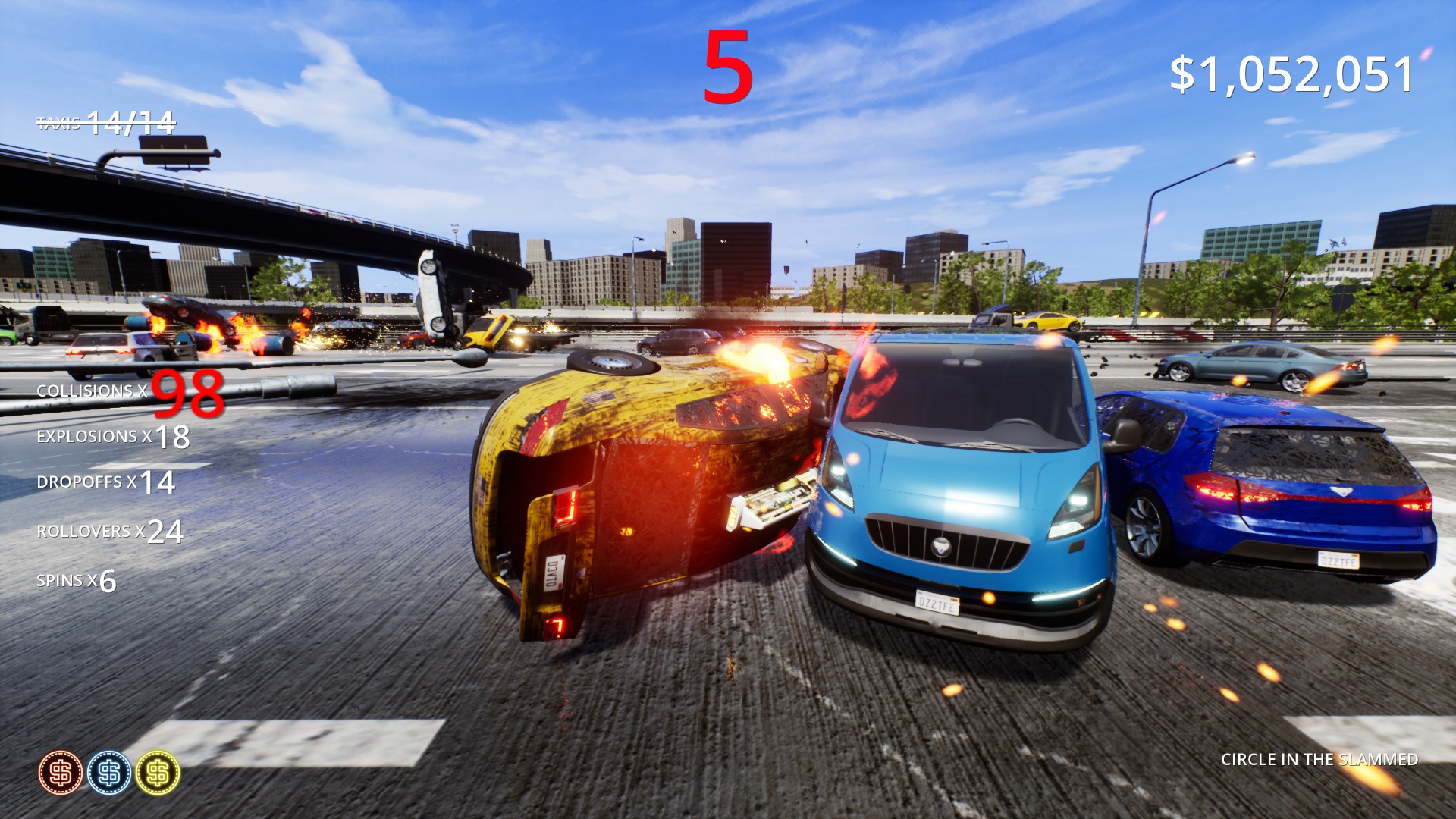 The general concept of Danger Zone 2 is basically the same as the first: you’re some renegade car that has had enough of everyone’s bullshit and is going on a crash spree. I may have made up that part, but this is a recreation of the Burnout series’ Crash mode without any flavor text or backstory. You just crash cars, watch things explode, and accumulate high scores. The biggest change from the first Danger Zone is that you’re no longer confined to drab, sterile environments.

Danger Zone 2 takes you to the streets of the United States and actually places you on real highways. While these are clearly not modeled after actual roads, the influx of color and lively backgrounds makes the action far more tantalizing. You won’t be staring at the same nonsense for too long as each region gives you multiple highways to crash your way through.

In a nice touch, if you have any kind of familiarity with Burnout or the previous Danger Zone, you can completely skip the tutorial sections and get right to crashing. I actually completed the entirety of this game’s three regions before noticing I skipped the introduction. That being said, there are a few new mechanics in Danger Zone 2 that even veterans of Criterion and Three Fields Entertainment’s titles would do well to go over.

For starters, traffic checking is back (where you ram into cars from behind to send them flying), but you can now guide them in a specific direction by holding X or A on your gamepad (Square or Circle, for PS4 users). Since there are now different vehicles, Boost Chaining makes a return from Burnout and allows you to continuously boost if you don’t smack into anything heavy. Finally, the run-up to each Danger Zone on specific levels has a goal you can meet to increase your score, which adds an extra layer of complexity on top of causing chaos.

These are all great additions, fleshing out the core driving of the original and making Danger Zone 2 feel like a better-realized vision. Coupled with those diverse backgrounds, I got a lot of flashbacks to Burnout 3 and Burnout Revenge while I was playing. It’s great to hit your preliminary objective, smash into cars, deploy your Smashbreaker (Danger Zone’s take on the Burnout series’ Crashbreaker) and then start collecting various tokens in the environment to raise your score.

Danger Zone 2 is still a more puzzle-focused take on Crash mode just like the first Danger Zone. This isn’t purely about slamming into cars and causing mass mayhem, because you’ll rarely hit the score total for a platinum medal if you avoid collecting the tokens scattered about each intersection. You’ll need to make careful consideration of where your car is heading and how you’re completing each run-up objective to score success. 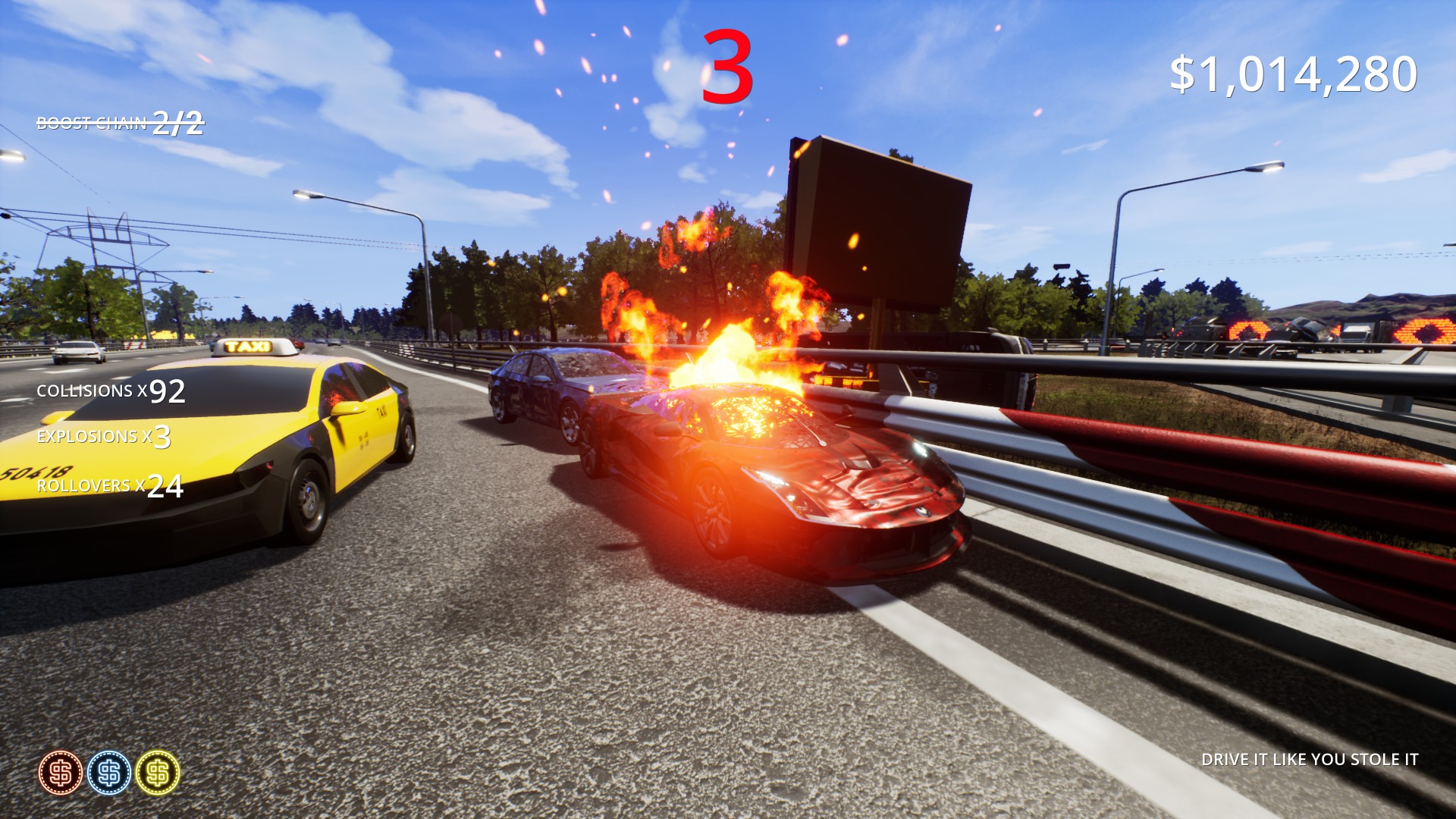 Some of the levels are also not just straight crash segments. A few will require you to speed past traffic in an F1 car and reach the main intersection in time for a mega crash. Others will see you occupy a semi-trailer and plow through traffic in a reckless display of violence. Danger Zone 2 tries its best to mix up the proceedings and it certainly works to keep you entertained at every corner.

Where this starts to falter is that the general score thresholds on each level are really low. While $1 million in damage sounds like a lot, any Burnout veteran is going to demolish Danger Zone 2 in a little less than three hours with basically nothing else to do. There is no multiplayer to speak of and Three Fields Entertainment has relegated any kind of racing mode to its upcoming Dangerous Driving spin-off. This was a problem with the first game, but it becomes a little harder to ignore the second time around (and with an increased price tag, to boot).

I think the biggest issue is that there is only one of each token on every level. The first Danger Zone littered each test zone with multiple tokens to collect, meaning you could miss some and need to rely on raw destruction to up your score. In Danger Zone 2, you’re screwed if you don’t pick them up, but nabbing them all is a lot easier and basically guarantees that you’re going to pass every level with the highest score. 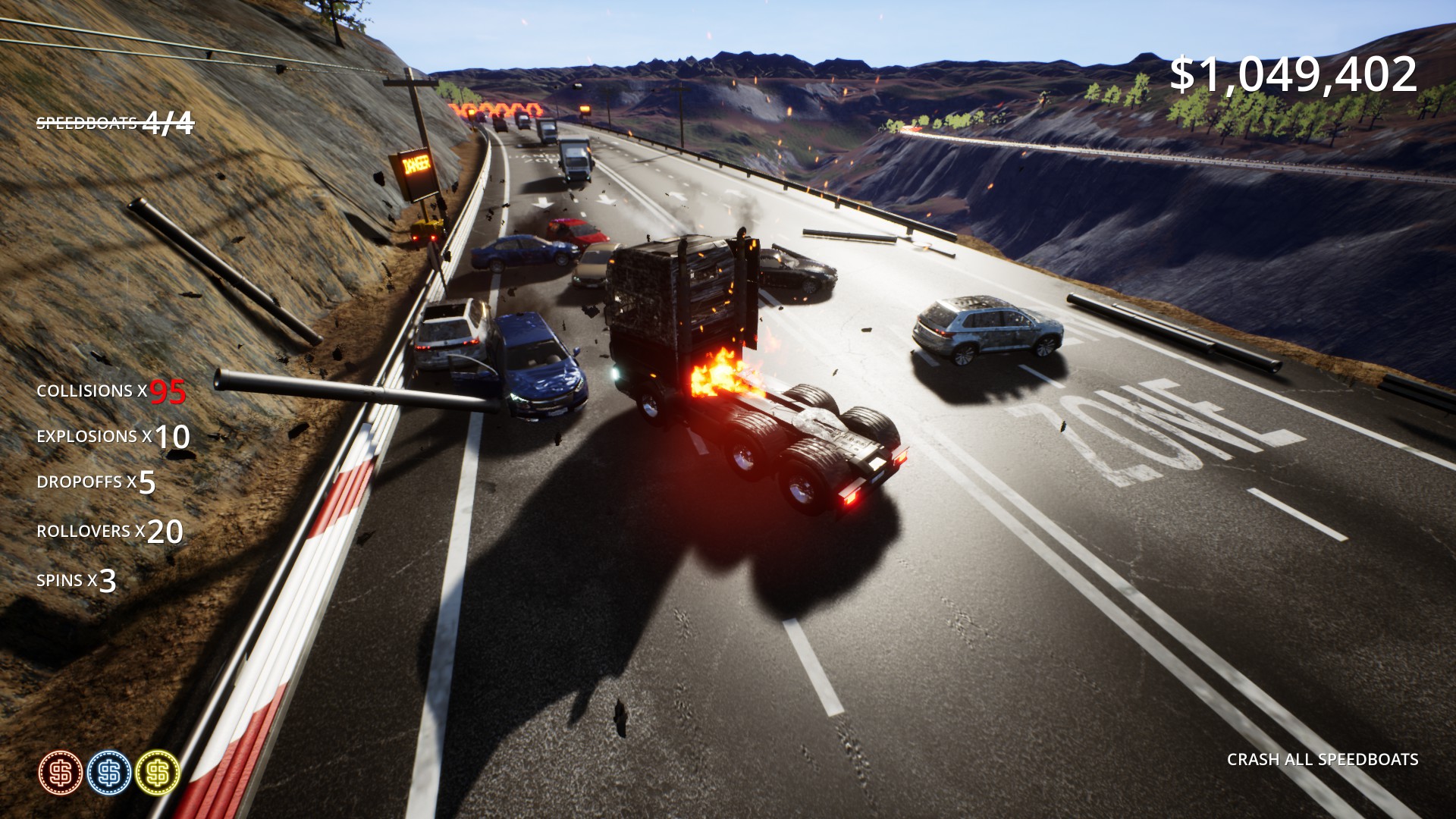 That is if you can consistently nab all the tokens. For some odd reason, Danger Zone 2 exhibits more technical issues than its predecessor. Built on an updated Unreal Engine 4, there is a whole slew of graphical enhancements in Danger Zone 2, but there is also the introduction of some wild glitches and bugs. I can’t tell you how many times I collided with some cars expecting to crash, yet had my vehicle do a 180 and speed off in the opposite direction.

The collision detection on certain parts of the environment can be finicky, sometimes sending you flying through the air and other times putting your car on its side. You’ll hit ramps and crash, for some reason, or fly with the proper arc that Three Fields intended. There are also some objectives where you’ll need to collide with a vehicle in mid-flight, but then that car’s physics will stop on a dime and completely screw up the intended solution.

This could be resolved if your Smashbreaker had the ability to deploy at will, but you need to first crash before that can happen. Since hitting a car isn’t a guaranteed crash, you’ll race into an intersection with a clear plan and then have an entire run wasted because your car decided to be impervious that time. Don’t even get me started on the cars that materialize out of thin air, especially when the draw distance shows cars beyond their position. 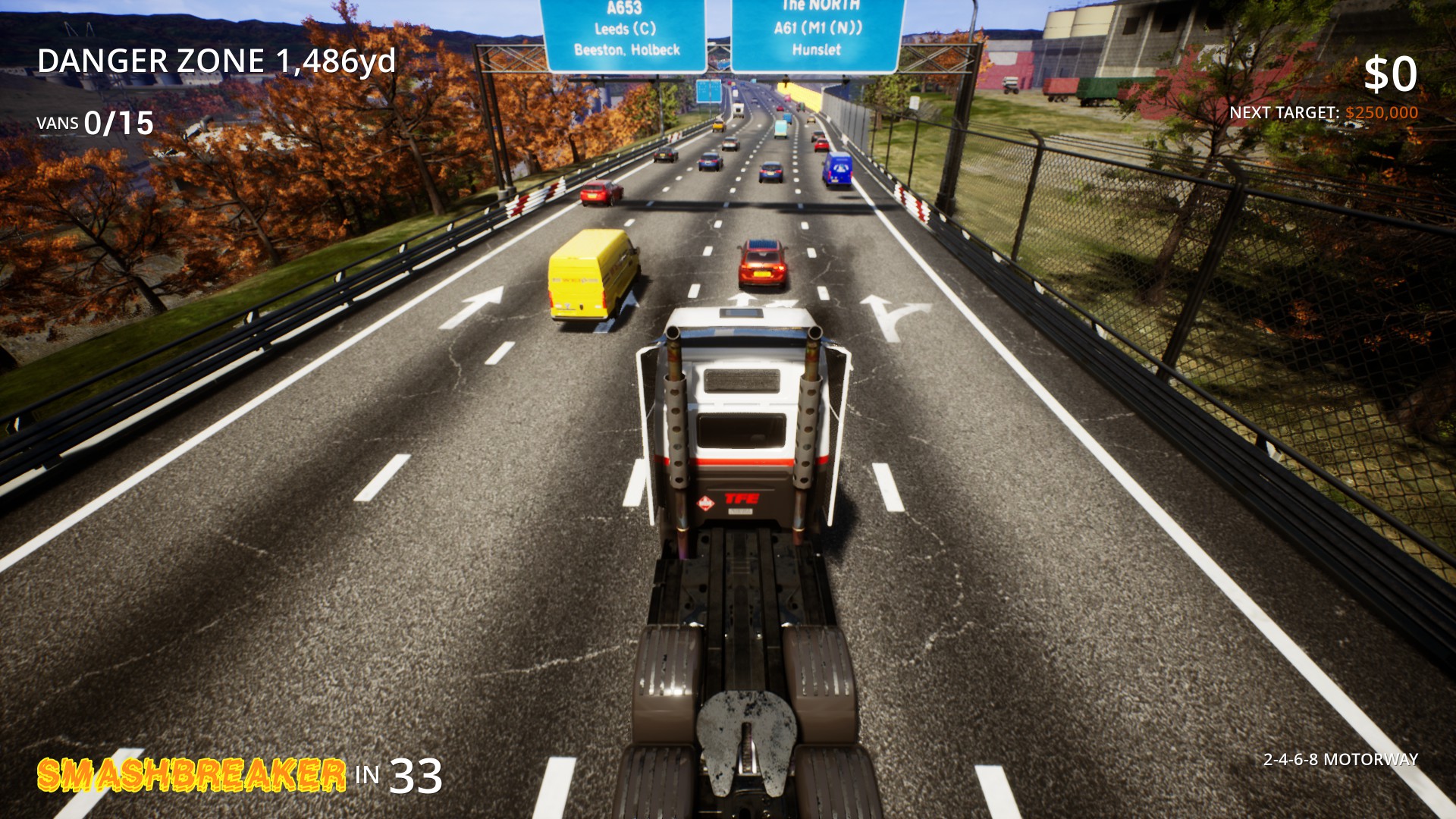 This does a great disservice to the action Danger Zone 2 does its damnedest to change up. I want to love those fast-moving F1 segments, but if cars are literally appearing out of thin air, how am I supposed to maximize my time and score? I want to applaud moving outside of a generic test facility, but if basic collision detection on ramps is so awkward, was the change in scenery really worth it?

To top it off, the general visuals are just bland. I suppose one could ignore the soft filter that is applied to everything, making the camera appear as if it was dipped in Vaseline, but how do the cars still not have proper destruction mapping? I want to see the body of my sedan fold in when I careen into a trailer, not just lightly dent and smoke. I may have excused this the first time out (since it was the first attempt at recreating Burnout), but sequels should improve instead of regress.

The general polish of Danger Zone 2 is a downgrade compared against its predecessor. That it actively starts to affect the gameplay is where I draw the line. I had no problem recommending everyone grab the first game because it was cheap, delivered on its promise, and brought us back to the glory days of arcade racers. Danger Zone 2, though, is mostly the same thing in a worse package. 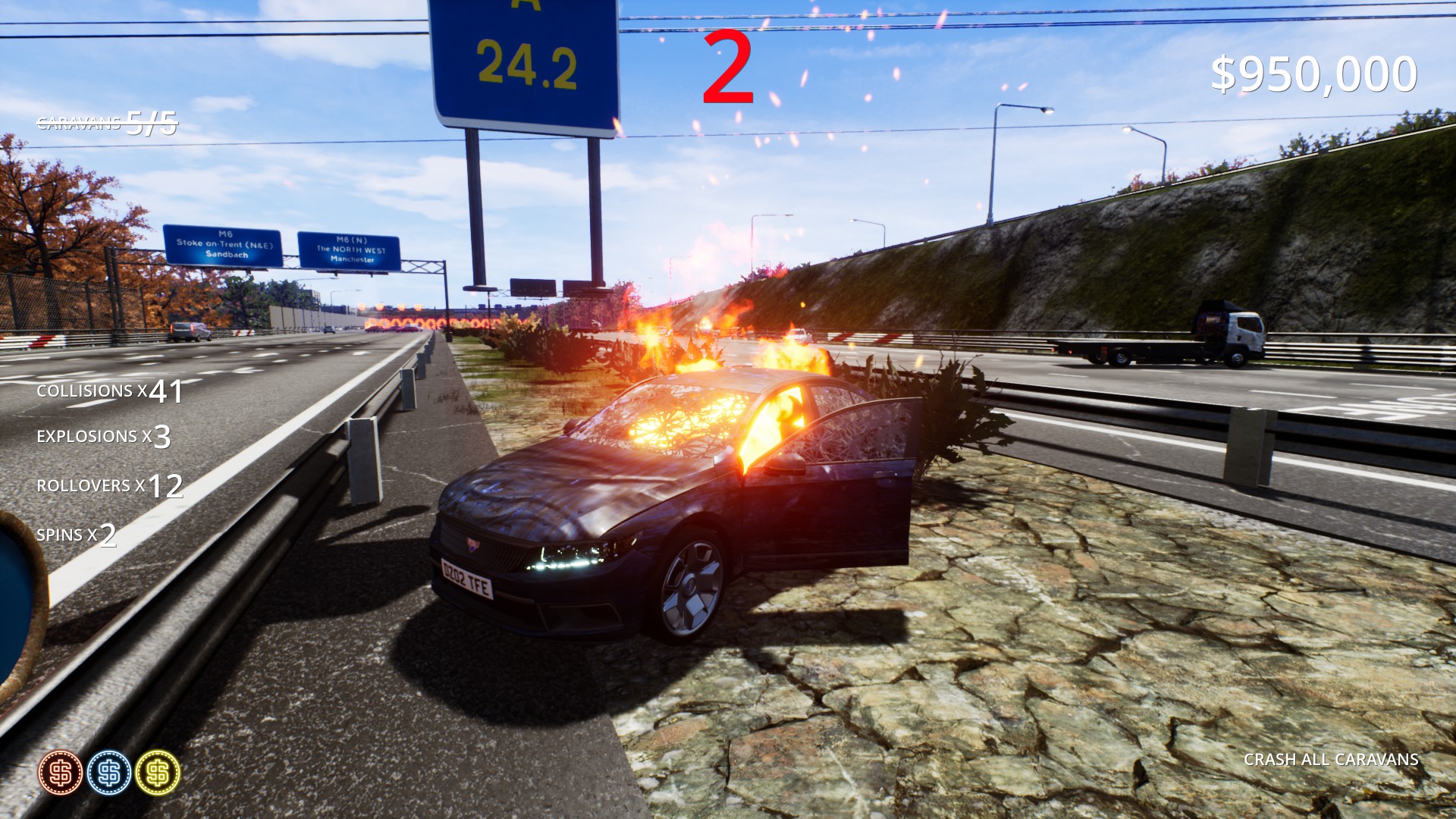 The real killer is that you can grab the absolute best Burnout game, Burnout Revenge, on Xbox 360 for $9.99 on the Xbox Live marketplace and it has backward compatibility on Xbox One. For half the price of Danger Zone 2, you’ll get not only a fully featured racing component and online multiplayer but five times the amount of crash junctions.

Danger Zone 2 isn’t a bad game, but it falls apart under the weight of its technical issues. If there wasn’t already a better version of this game by the same devs (disregarding the Burnout series), I might be more forgiving of some of these flaws. I simply can’t ignore the shortcomings, though.

Danger Zone 2 has all the groundwork set to make an explosive comeback for Burnout, but Three Fields Entertainment just needs to up its quality control. Also, how do we still not have Kenny Loggins on the soundtrack?!