Adventure games enable developers to guide their audience on an incredibly focused journey. Completely scripted — with little variation or user input that impacts the outcome — they rely on the quality of their storytelling first and foremost. Gameplay is often used only to aid the method in which their madness is presented.

Danganronpa: Trigger Happy Havoc is an adventure game where madness excels. It’s a world where fear lurks around every corner and despondence has crept in; its narrative is full of uncertainty, mystery, and sadistic intent. Yet, its gameplay creates more than just a fly on the wall feeling — even if you are living someone else’s story — and is a must play for any fan of the genre or those who love a good “whodunit.” 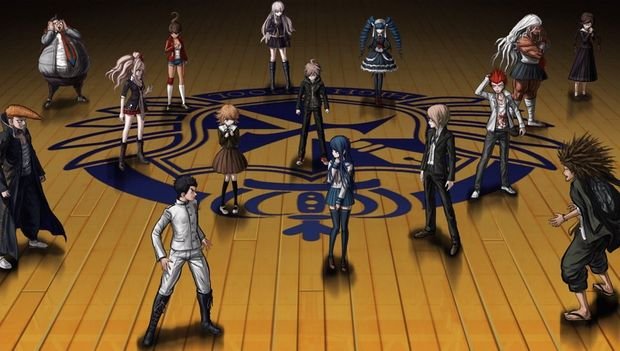 As Makoto Naegi, you’ve been accepted to the prestigious Hope’s Peak Academy, a school that only admits the most talented “Ultimate” students of various fields each year. Though strangely for Makoto, he’s pretty average across the board and only got the chance to enroll because he won a raffle as the “Ultimate Lucky Student.”

However, upon reaching the school’s gates, his luck begins to run out. Inexplicably, Makoto suddenly loses consciousness only to awake hours later in what appears to be the school’s gym surrounded by 14 other “Ultimate” students. No one knows what is going on, except for one fact: they’re trapped.

It’s here where a maniacal remote-controlled bear named Monokuma appears — a two-faced Teddy Ruxpin looking monster, with a penchant for rules — who drops the bombshell that all the students are now imprisoned at the school for the rest of their lives. That is, unless they are willing to do the unthinkable to earn graduation from the academy: murder another student without getting caught.

Well it wouldn’t be much of game, or a story, if some of the students didn’t eventually succumb to the pressures and start killing each other. In the time leading up to a murder event, known as “the Daily Life,” you’ll spend the majority of it getting to know each student and trying to understand the situation that has befallen you. 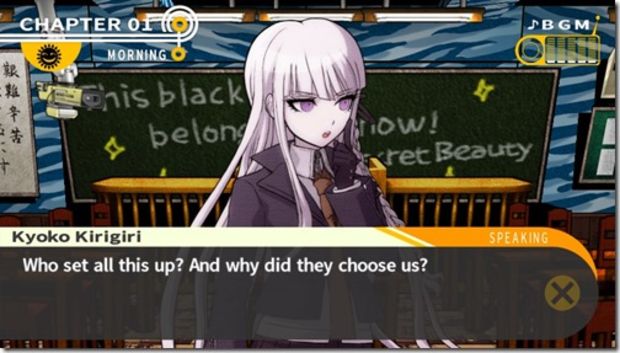 During this time, you’ll explore the available areas of the school from a first-person perspective. Similar to the investigation scenes in the Phoenix Wright series, you’re free to scour each area in search of information or to perhaps talk to a student hanging out in the area. Once all the information is collected for the day, the game pushes the story forward.

Eventually the game awards the player with “free time,” which allows Makoto to roam the school and build stronger relations with other students. Akin to Persona’s Social Link segments, whom you talk to is completely your choice. Additionally, you can also purchase gifts from a capsule vending machine to gift to them in order to increase your bonding. The interactions are quite simple, but they are a necessity since they also allow Makoto to build up special skills that he can later use in the game’s main attraction: Class Trials. 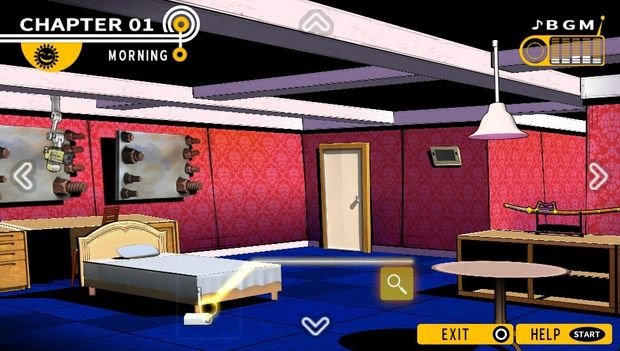 All this good willed nature comes to an end with the discovery of a murder, in which the game enters the “Deadly life” section of gameplay. The first phase consists of investigating and collecting clues, called “Truth Bullets,” for the looming trial ahead. Like the earlier phases of the Daily Life, the game pushes the story forward upon the collection of all pertinent information.

These moments that lead up to the Class Trial could be very tedious under a poor script. And though NIS America’s localization is usually hit or miss with me, the majority of the characters here are exceptionally interesting. I found myself enjoying the messed up situations that surrounded even the more flamboyant characters; waiting to see how they would respond once the crap hit the fan. Of course, with fourteen characters you’re bound to find tropes, but their predictable tendencies are often used to throw players off the scent. Additionally, the game moves at a much more rapid pace than most other adventure/visual novel style games which helps keep the tension focused throughout. 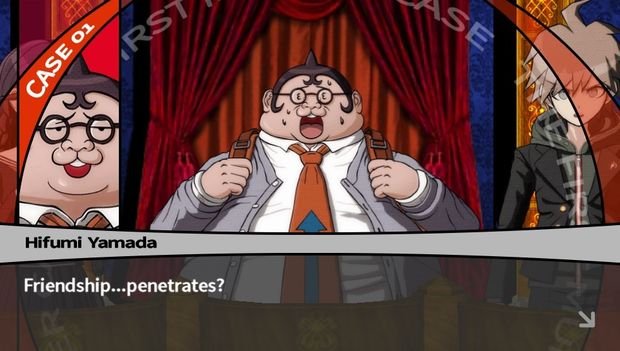 Once the Class Trial begins though, the tension magnifies immensely. Similar to the Phoenix Wright series, false accusations can be your undoing, but unlike those games, time also serves as your opponent. There are four main styles used for figuring out who the culprit is in each trial (Nonstop Debates, Epiphany Anagram, Machinegun Talk Battle, and Climax Logic) and they get progressively more difficult as the game moves on.

Nonstop debates lead off each trial and involve all surviving classmates. During these discussions, it’s up to the player to find contradictions in specific highlighted phrases and shoot them down with the acquired Truth Bullets gathered from the previous investigation. White noise created from other students can interfere with hitting the right statement in later trials in addition to some other surprise elements that are added later to up the difficulty of these scenes. 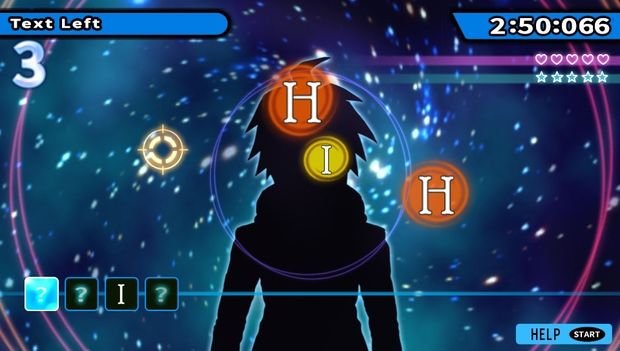 As the answers begin to unfold in the trial, players eventually get into a one-on-one Machinegun Talk Battle debate with a fellow student. This style threw me for a loop the first time, as it mixes rhythm based gameplay with shooting down a student’s remarks. Progressively, like the other styles, it gets harder to maintain the rhythm further since opponents can make your tempo bar disappear or change the speed of the rhythm entirely.

The idea to add action, via shooting or by rhythm, segments into the actual trial is something I really enjoyed once I got the hang of things. It cleverly brings tension — something you would actually feel if your life was on the line — during every murder trial. The fact that things get more difficult, later in the game, only amplifies the disparity of the situation at hand. Getting an answer wrong is one thing, but it’s entirely different when you choke under the pressure of time. 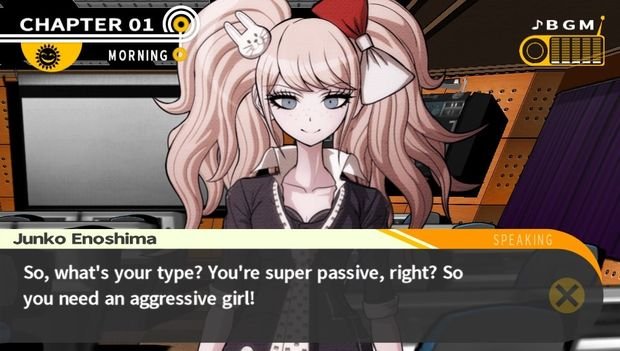 My favorite of the gameplay styles though was the Climax Logic puzzle. In this style, a comic strip — that recreates the events of the murder — must be put together using the fragments of information derived from the trial with the basic facts already known. Time is your only enemy here, but there are typically extra potential answers to each slot in the puzzle that can lead a player astray.

Danganronpa mixes a variety of art styles throughout each case, but the way it all comes together helps paint an exquisitely disturbing picture. Its mix of 2D and 3D, over-the-top death scenes, hyper stylized murder images (with neon pink blood) combined with a well thought out story make the game’s world all that much more alluring, even amongst its sadistic nature. 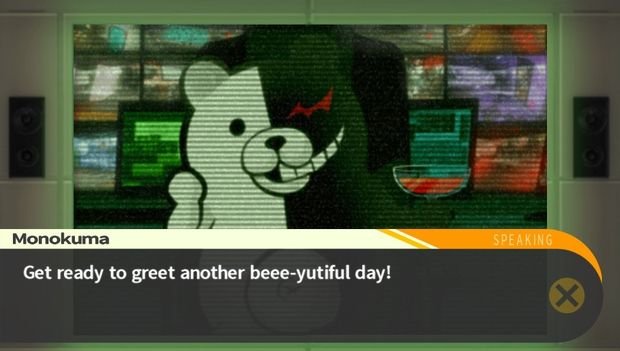 Danganronpa: Trigger Happy Havoc is easily one of the most intriguing games I’ve played in quite some time. It’s as if Persona and Phoenix Wright got together and had a little demon spawn that I didn’t want to put down — no matter how disturbing it can be at times. For fans of adventure/visual novel games, this is an easy must play on Vita this year. But it’s also a great entry for those who tend to find this type of game a little on the slow side and well worth the time.