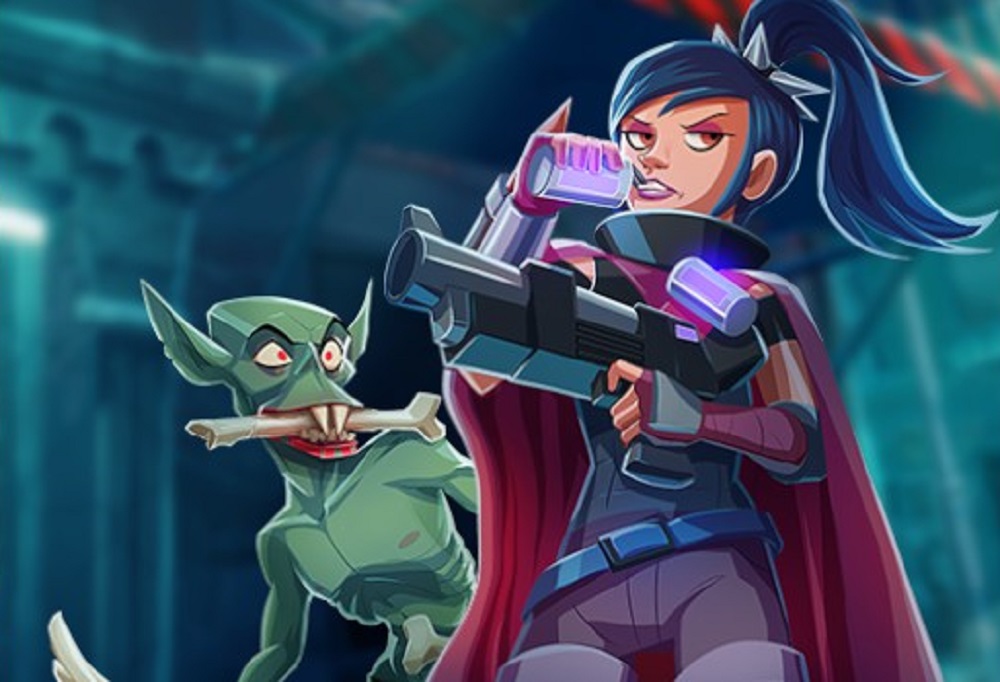 There’s a little-known Australian exploitation flick called Thirst. Released way back in 1979, it stars Henry Silva as the head of a massive corporation that has made big business out of vampirism, kidnapping innocents, and siphoning their red stuff into drinks to keep the vamps of the world satiated. It literally turns vampirism into capitalism, as well as taking an obvious dig at the “bloodsuckers” of big business.

I have the feeling that Screwtape Studios, an up-and-coming indie outfit – also from Down Under – may also be fans of said schlock, as their new arcade shooter, Damsel, dallies around these exact same themes (and even has a similar logo). That’s fine though, because I get a kick out of old exploitation movies, just like I get a kick out of Damsel.

Damsel is an arcade platformer built around quick reflexes, precise movement, and micro-managing tasks through smart map traversal. In the world of Damsel, humans and vampires co-exist in a shaky alliance, with the vampires’ need for blood satiated by “Red Mist,” a popular drink that sells by the bucketload.

However, humans have been disappearing with worrying regularity, and with the Red Mist corporation at the top of the suspect pile, The DSA (Department of Sanguinarian Affairs) sends in its best operative, the titular “Damsel,” to get to bottom of the disappearances and uncover a shocking corporate conspiracy. Armed with a rapid-reload shotgun, a raggedy cape, and an overwhelming amount of smug, Damsel sets out to save the day.

It’s a fairly thin story, one which is delivered to the player via slight comic book panels between stages, but it serves its purpose in adding much-needed elements of lore, world-building, and stakes (no pun intended) to Damsel’s high-speed adventuring.

In each of the game’s stages – which currently number around 50 – Damsel is tasked with completing one of several objectives. These can include wiping out the corporate vampires, hacking terminals for evidence, disarming bombs, or freeing a glut of hapless hostages who are bound, gagged, and littered throughout the stage (also providing a constant reminder to keep that itchy trigger-finger in check). Each of these objectives house short rhythm-action mini-games, which must be completed accurately and at speed to avoid slowing down our blue-haired slayer.

Instantly noticeable from the first 30 seconds of play, Damsel is a reckless and fast-paced affair, clearly intended for the speed-running crew. Each stage is designed around dynamic movement – including air-dashes, double jumps, and pogo attacks – as well as efficient path-finding and map negotiation. An omnipresent clock racks up the milliseconds, with players encouraged to beat their own times. Score Attack is also a factor, with glowing skulls gathered for multipliers, and numerous awards added for trick shots and bonus objectives.

Though it may present its own world, characters, and storyline, Damsel is not a narrative adventure, it is a game intended to be played like Spelunky, Super Meat Boy, or other such titles, where the only real goal is to be faster, slicker, and more efficient than your own previous efforts. Damsel pulls this off well, while retaining its own sense of personality through fun stylised sprites, grim comic-book locations, and a dark, industrial score. Great effects, such as fireworks exploding from rescued hostages, or the incendiary demise of vampires, really help bring these visuals to life.

There are other modes available outside of the main campaign. These include an Arcade Mode, giving the player a set number of lives to burn through various stages, and Damsel Dash, a sort of “daily drop-in” affair where you can challenge the high scores of other players. There is also a “Chillout” option, which takes away the sting of death, allowing the player to practice specific stages without fear of failure, or just indulge in some cathartic double-barrelled carnage against the creatures of the night.

Though its concept and execution is generally sound, Damsel is a bit rough around the edges. I did encounter some sound, animation, and response issues while playing, the latter of which is an absolute no-no in a game where frame-perfect precision is a must. Screwtape Studios has been pushing out updates since release however, so hopefully these bugs will be ironed out.

Damsel also left Early Access with a third of its campaign incomplete which, given the speed of its stages, means that you’ll breeze through what’s on offer in no time, perhaps across a single session. Obviously, the entire concept of the game is to repeatedly replay and improve, so length isn’t too much of a drawback (especially given the budget price tag), but the repetitious use of stage layout should be noted.

As the debut PC release from Screwtape Studios, Damsel shows a lot of promise. Players should be aware that what they’re buying into here is a hobby or break-time title, to be practiced, played, and replayed in regular sessions, with the only goal being self-improvement. I hope Damsel finds its audience among the speed-run/live-stream community, as its fun style and rapid action make for a breathless experience, provided everything goes according to plan.

Damsel is an intense, occasionally frustrating title, for those who have quick reactions, an eye for planning, and a patience for repetitive death. Those who like their games challenging, twitchy, and demanding of player improvement should consider joining Damsel on her wild ride into the night. But those expecting story, adventure, or even mercy will likely find themselves thirsty for more.