In theory, flight simulation games offer fans of the genre accurate flight controls with a diverse array of those amazing aircrafts they love so much, with powerful dogfights and skill helping push along a narrative worthy of their time. Damage Inc.: Pacific Squadron WWII aims to do just this, while having players relive the “greatest aerial battles” of the second World War.

Sadly, just like anyone who plays this title, it has difficulty hitting the target.

The game starts out innocently enough: choose Arcade or Simulation mode, and jump in. But almost immediately, it falls apart. If you choose Arcade mode, your view is behind the plane, and that’s the only option given. Simulation allows for external, nose, and in-cockpit views, but you must select which version you want when you begin the game. There is no in-game button to toggle through camera views; if it turns out the one you’ve selected isn’t to your liking, you must pause the game and change it in the options menu. A minor quibble to be sure, but one that begins a slew of issues with this title.

Obviously Simulation and Arcade controls vary, but beyond that, there’s not much difference between the two modes, other than a few buttons changed around and how the planes pitch and yaw, as well as the aforementioned camera handicap. Just be careful when changing cameras in the options menu — if you’re playing Simulation with external camera view, be careful not to select Arcade with external camera view, as that has totally different controls. 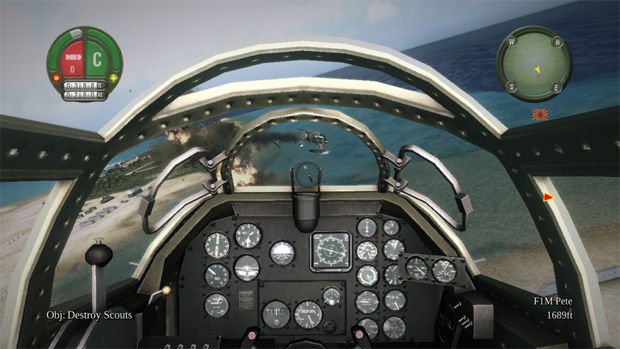 After the necessary tutorial, the game drops you directly into a combat mission with Japan’s first attack on Pearl Harbor in 1941, and missions proceed historically through 1945 along the Pacific coast. It is here that the game’s real issues become apparent. Firstly, and I can’t say this in a nice enough way, the game is just ugly. While a certain amount of love and detail has been given to the 32 unique planes, everything else is sloppy and uninspiring. Frame-rate issues pop up frequently, and everything becomes jaggy and muddied, while the graphics become choppy trying to catch up to your hot dodging maneuvers.

Speaking of your maneuvers, for a simulation game, you certainly do a lot of barrel rolls. As you attack enemy aircraft, you’ll tuck, roll, skim the water, buzz towers … all in the name of taking out your foes. Both your enemies and friendly airplanes show up on your mini map with appropriately colored icons, and you’ll target baddies with relative ease — until you realize you’re supposed to aim for the red dot in front of the enemy ship rather than the ship itself. This is to lead the plane, anticipating its flight path into your line of fire, but when the plane is directly in front of you flying straight, aiming for a red reticule above the plane seems a bit stupid, and serves as the reason why you’re flying like you’re in a damn air show rather than fighting during D-Day. 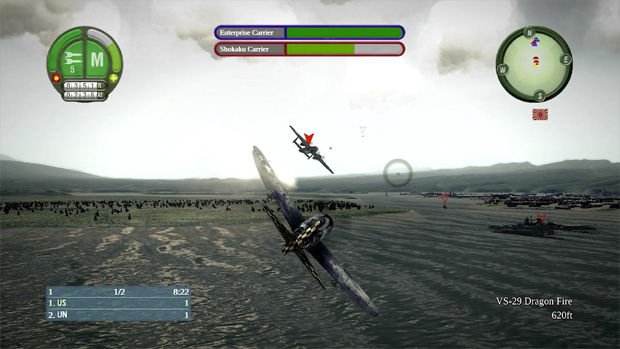 Hitting the reticules can be a chore, until you realize that the game equips you with a bullet time of sorts. Warspeed allows you to slow everything down so you can carefully aim your shot, which makes taking out foes a bit too easy. This, as well as a speed booster, are always available and replenish instantly, despite having two essentially unnecessary meters showing how much of each you have in your HUD.

There are waypoint markers that show up occasionally on your map as well, signifying where you should go to activate the next part of the mission, fly over to take recon, or things like that. However, when you really need the markers, such as when the game tasks you with protecting certain buildings or planes from enemy attackers, they’re nowhere to be seen.

The only thing that pops up on your map are all the planes, and your targeting icons always snap to the immediate threat closest to you. It’s frustrating to lose missions over and over again because you’re supposed to be defending some position you can’t even find.

There’s a multiplayer portion here too, but the less said about that the better. It’s passable, but the choppy graphics and terrible targeting are only amplified by playing against human opponents. If you enjoy frustration, feel free to dive right in. 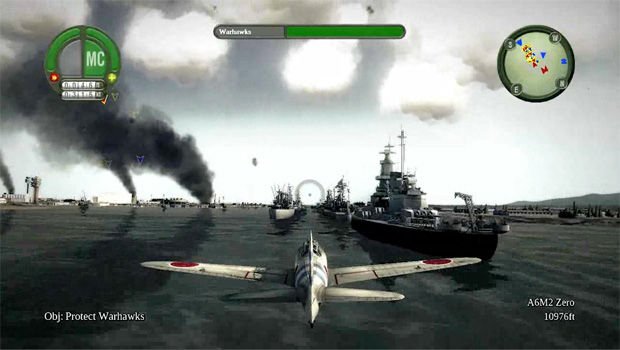 It’s clear that Mad Catz only made this game to go along with its new Saitek AV8R flight stick, which comes bundled with the Collector’s Edition of the game. Sadly, my time with that was even worse, as the stick itself is so touchy that even the slightest movement had the targeting sights flying all over the screen and maintaining an accurate shot was nigh-impossible.

I switched back to the standard controller after failing the same mission over and over for trying to aim while avoiding hitting the ground. Word is the flight stick works very well with other games of the genre, but if it can’t even work well in the game it’s bundled with, I don’t have high hopes.

Damage Inc. is a hot mess. Choppy frame rate, ugly graphics, shoddy presentation, forgettable multiplayer, and an overall worthless feeling when playing doesn’t amount to much. There’s at least a good variety of things to do with the number of missions and planes involved, but you may be too frustrated with the gameplay itself to even care. Play the demo and save your money.