For whatever reason, Capcom has been quite reluctant to give fans a sequel to the cult classic Super Puzzle Fighter II Turbo. The game has seen an HD remake and a mobile spin-off that’s no longer available, but a true sequel, utilizing any of the new characters the developer has added to the Street Fighter franchise over the years, has been MIA.

Lucky for us, Nicalis is here to fill the void with Crystal Crisis. 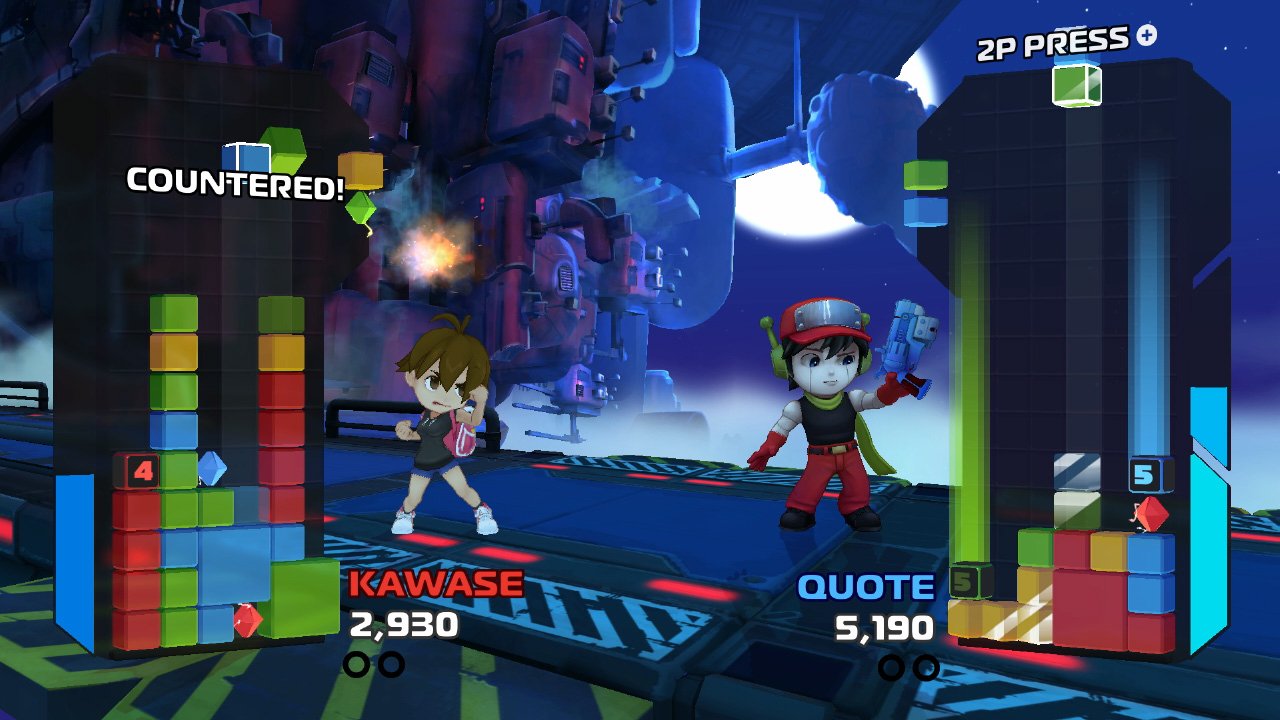 Like the Capcom classic that came before it, Crystal Crisis is puzzle fighting game featuring some of the biggest stars in the Nicalis catalog. Isaac, Quote, Curly Brace, and Aban Hawkins are here, along with non-Nicalis characters like Astro Boy, Black Jack, and Kawase from the Umihara Kawase franchise. There are 20 characters in all, more than half of whom you have to unlock by actually playing through the game.

Going through the tutorial — which you need to do to unlock Johnny Turbo of the old Turbo Duo adverts — will explain everything you need to know about playing the game. Crystal Crisis is a simple matching puzzler where combos are key. You drop crystals down in pairs of two, trying to connect as many of the same color as you can. Blocks or rectangles of the same color form clusters which double your attack power. Occasionally, though less frequently than I’d like, the game will send down a spark crystal you use to break crystals on the board. The more crystals you break, the bigger your attack on your opponent will be. Chain together attacks and watch their board fill up with crystals that are unusable until their countdown clock is done. If you fill up your opponent’s board all the way, you win.

Crystal Crisis features a few innovations that separate from the game is so evidently apes. The first is burst moves, which are special offensive or defensive skills you can use. These vary character to character and some are clearly more powerful than others. Akuji, from Akuji the Demon, will completely switch his board with his opponent, potentially leaving them in an unwinnable situation. However, Akuji is one of a few characters who need their burst meter to fill up all the way before they can use it. Others, like Tina Hawkins, can use weaker versions of their burst moves at one-third intervals. She ended as my favorite character to play as due to her burst moves being so easy to grasp and quite useful against the more difficult AI opponents.

The game also features a grid-wrap ability. Basically, when dropping a pair of crystals on the board, if you line it up on the left or right side and rotate it, instead of pushing the crystals out, it will send one to the other side of the board. This has a huge potential for strategy and I made frequent use of it going through the different modes of the game, though if you want to play a more pure version of the puzzle fighter, burst moves and grid wrap can be turned off. You can also mess with the color schemes of the crystals themselves and there is an option for colorblind gamers.

There are a variety of modes packed into this game for either single-player or multiplayer fun. There is a story mode where characters are trying to track down the titular crystals and the tale plays out differently depending on which characters you side with. There is also an arcade mode with four different difficulties, an inline mode that changes the central gameplay conceit to a match three, a tag-team mode that lets you switch between two characters with their own individual tables, and an endless survival mode.

Perhaps my favorite though is memory mode. Here, as soon as you drop a piece into place on the board, its colors become obscured to you. In order to actually have a shot at winning, you need to do your best to remember what colors are where, though as the match drags on, that becomes more difficult and I found myself relying more on my burst moves to see my way to victory. Playing this mode against AI on easier difficulties felt fair, but trying to tackle it in expert is far beyond my capabilities. 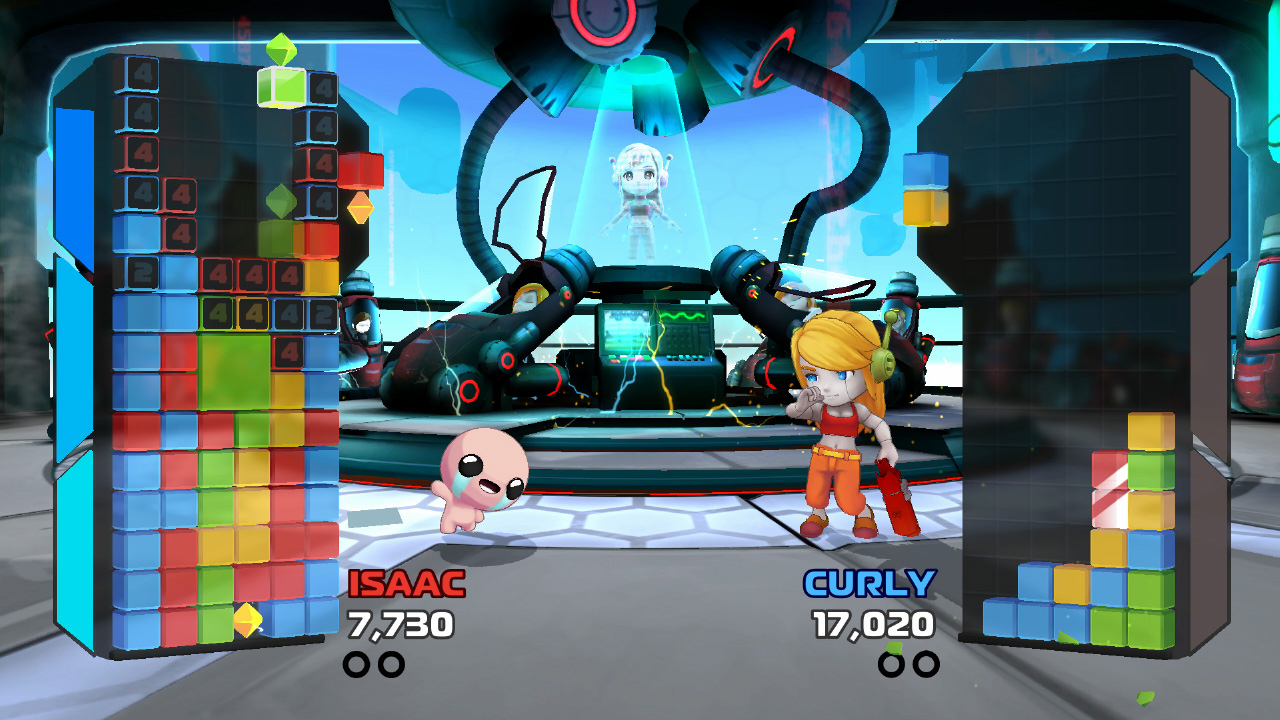 Playing against other people is what will give this game legs. There is local multiplayer, with inline, tag team, and memory all being options in addition to the standard mode, as well as online play. You can choose ranked or unranked matches, play against friends, or make custom matches setting the rules and game mode yourself. I was able to go online against Nicalis employees and while they completely wiped the floor with me, the online play was without fault. There were no hiccups in the connection, no disconnects, nothing to impede my chance of victory outside of my lack of skills. Whether or not it’ll be the same when the game is released remains to be seen, but my matches with it were basically flawless.

The only major flaw I found in the game is its treacherous load times. Everything, from starting up the story mode to just going into a single match, can take well over 20 seconds to load. And 20 seconds is being generous as I commonly found myself waiting more than 30 seconds for each round of the arcade mode to start. Even quitting back to the main menu can take up to 15 seconds. In the grand scheme of things that isn’t that long, but holy hell does it feel endless as it’s happening.

Outside of those pesky load times, it’s hard to find fault with Crystal Crisis. This is just a well-made game, a genuinely fun puzzler that challenges players to imagine new strategies with every character they try. And with memory mode beckoning me to play again and again, I don’t imagine I’ll be taking up any of the other Switch puzzle games for a long, long time.