In 1999, I crawled out of Counter-Strike’s wretched vagina to become the man I am today. And, now, I’m tasked with rating the game. How does one even rate his mother?

In sixth grade, I would wake up for school at 5:30 AM, but then I started getting up at 4:30 just to get a couple rounds in before class. Call it dedication or a sickening obsession, but I was hooked on CS (nevermind my neighbor who broke into my house to play while I slept!) It was more than a game. It was my social hub, my iTunes visualizer, and my brief entryway into game design (which didn’t go very far.) It is and remains a standout multiplayer shooter that paved the way for things to come with Call of Duty and Battlefield.

Being eight years since the excellent Source remake, Valve has decided it’s time to give the game another facelift. What started as a Source port for consoles became a more ambitious project that included PC. While there are no radical departures in Global Offensive, it is without a doubt a reboot. Valve has just hit the reset button on the series, once again. As drastic and premature of a maneuver it may be, there is no denying that Counter-Strike remains an addictive and rewarding competitive shooter like no other. 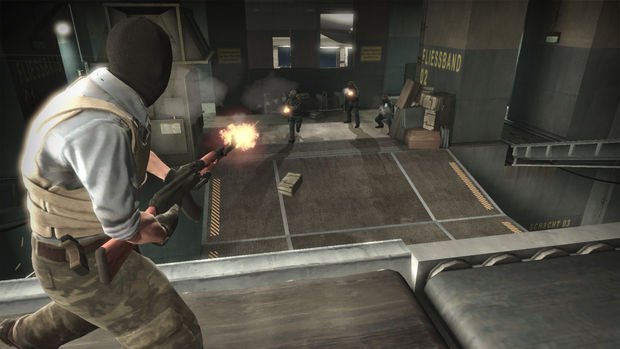 Counter-Strike was born on PC and it is there that its largest community of players will stay. Nevertheless, Valve wished to branch out and get their hands on some of that Call of Duty money. Even so, the game still plays like classic CS: this is white-knuckled gaming not for the easily impatient and frustrated. It’s true that the game has been rebuilt almost completely, but the majority of changes are superficial and surface level: A chime plays when you kill, you are rewarded with progress points and achievements that do nothing, and the game’s player models have become greatly improved.

If you are new to the series, here’s what you can expect. CS is a slow-paced game — funny thing is that it was pretty fast in the days of Rainbow Six — where two teams try to eliminate each other while attempting a secondary objective (rescue hostages or plant a bomb). The two defining features of the game are the permanent death that forces players to spectate until the next round begins, and the ability to purchase weapons and equipment at the start of each round with money earned from kills and victories. You can find these features in Call of Duty’s Search and Destroy mode as well as Shadowrun (2007), but outside a couple mods for Quake and Unreal Tournament no one has attempted to replicate the full package.

What I love most of all about CS are the maps and Valve seems to know as much. Nine classic maps are included in this download, in addition to eight new maps for the two new game modes (more on this below). You’ll find some minor changes made to Italy and Dust, but it’s not exactly going to put a stop to your nostalgia or established strategies. Since death comes quickly, you’ll need to learn the maps inside-and-out so you can cover all your corners. You’ll also need to keep quiet, as this is a game where hearing nearby footsteps can change the course of a round. Above all, you’ll need to be incredibly accurate and control your weapon. This is where things get a bit rough for console players. Without accuracy and player awareness, you don’t stand a chance in the brutal servers of CS:GO.

Valve has tasked Hidden Path with fitting a square peg in a round hole, but the young developer has done an admirable job of making the game approachable to new console players. There is a well made tutorial to guns, an informative “How to Play” option in the menu, dumb-as-dirt bots to play against offline, and a new player ranking system (ELO rank) that will pair players of the same skill level together over time. Here’s where the things fall apart: CS was never meant for consoles and this latest iteration serves as a reminder.

In addition to having far inferior aim controls, console players won’t have access to a browser and are limited to 10 player matches instead of 32 on PC. It’s ironic but Hidden Path have managed to gimp console gamers by abandoning its original plan to port Source. At least on consoles, you’ll have a level playing field with a controller unlike PC where using a controller is the equivalent of gnawing your legs off before a kickboxing match. The PlayStation 3 release supports Move and keyboard/mouse. I’m not sure if this is a good thing though, since these players will have a great advantage on the majority of players. 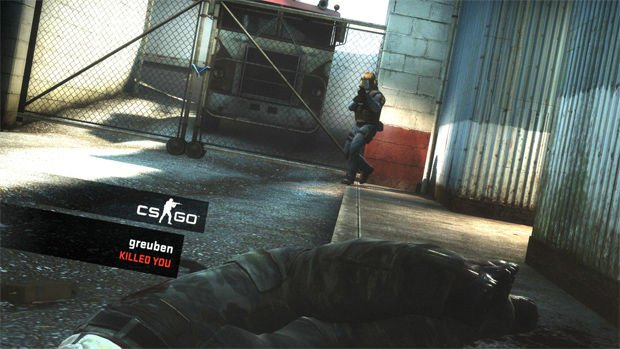 The most noteworthy addition of GO are its two new modes: Arms Race and Demolition. Both of which are variations of the popular Gun Game mod played on CS servers for years — though, you may be more familiar with Call of Duty: Black Op’s mode that borrows the name and concept. These two modes serve as an excellent entry point for new players, since you are forced to learn the current weapon in your inventory until you get a new one by killing an opponent. This will give you some time to get used to the vicious recoil on some of these guns — a jarring difference between GO and recent military shooters.

Arms Race has respawns so it’s very fast paced but doesn’t feel like CS. Even worse, there are only two maps that come with the mode and neither is very good. Demolition, on the other hand, is almost worth purchasing GO on its own merits. Demolition is the meeting point between Gun Game and classic Disarm CS maps. Once again, players are limited to one weapon they must upgrade through kills but now death is permanent and they need to plant/disarm a bomb.

Due to the smaller map size (there is only one plant site), these maps are intense and fast-paced but still capture that CS feel. It helps that all six maps are excellent. Most maps revolve around a central building that houses the bomb site, so if you love old CS maps like Estate and Militia you’ll get a real kick of these new ones. One of the maps is even a shortened version of the classic Train, so you’ll feel right at home on that one. Six maps is a good amount, but it’d be nice if more shortened versions of classic maps were included. 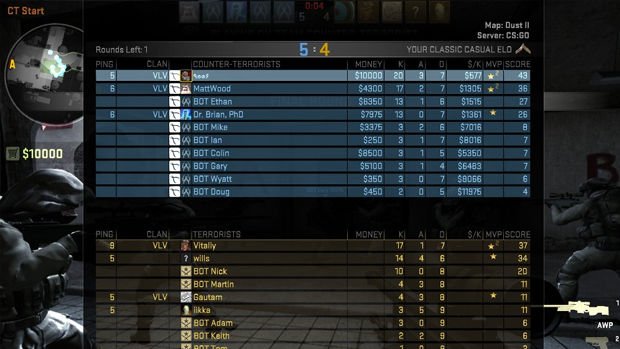 After a shaky divorce in 2004, Valve are breaking up the family again with GO. Counter-Strike has always been a game by community, for community. The game started as a mod made by fans and fans of the mod have made the game into something else over the years. If you are a 1.6 or Source player, you’ll find GO to be a bit hollow in terms of features. Gone are the detailed damage reports, server rankings, gambling, and quirky server-side tweaks. I managed to find a couple quality community maps (including faithful recreations of old classics like Backalley), but the pickings are still pretty slim. You’ll find some surf, Goldeneye, and zombie maps, but the mapping and modding community hasn’t arrived just yet.

The biggest offender in GO is the removal of free look. This may seem like a trivial thing for new players or those that played in servers that disabled it in past iterations, but it means a lot to me as a long time fan. Before I bought a camera and made short films, CS was my portal into filmmaking. Whenever I died, I’d use free look to spectate the match and craft cinematic films for myself with the remaining players. Please, please, please put this feature back in Valve! Some players also may mourn the removal of sprays — I’ve been told it can be turned on by server hosts, but I’ve yet to see one in a match.

Along with a wide set of achievements and two new modes, the biggest change to CS is a visual one. GO looks like what you remember Source looking like. No better, no worse. There are now multiple sets of player models specific to maps (no more arctic terrorists in the desert). These models look fantastic, but you won’t mistake them for Max Payne 3 characters. I can’t say the graphical upgrade to the levels is as impressive. You’ll barely notice the visual upgrade, but at least the game runs at a very smooth frame rate with settings maxed out. 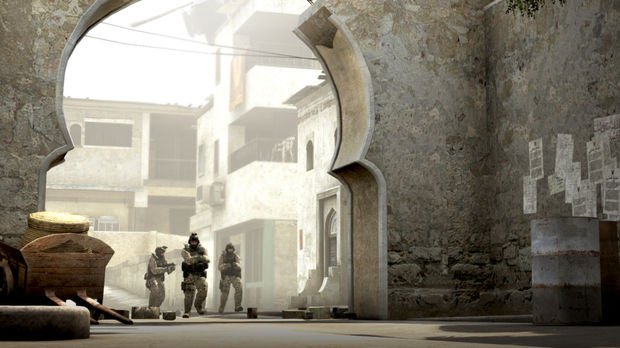 Along with re-balancing established guns’ firepower, spread, and recoil, some new items have been added to the game. The most noticeable additions are the Zeus taser and grenades (molotovs, incendiary, and decoy). The taser is useless and expensive. It will replace the knife as the new troll kill. It’s a one hit kill but you need to be so close to an enemy that you’ll rarely see it pulled off with success. Molotovs and incendiary grenades are perhaps the best weapon added to CS in a decade. These weapons cause a wide spread of flames that will help you do some crowd control in those bottleneck corridors. There are also some new shotguns, submachine guns, and other items, including replacements for the USP pistol and MP5. Don’t worry: There are no riot shields!

Though I was surprised to find many of GO’s visual tweaks in Source when I loaded that dinosaur back up, I still prefer GO’s presentation. The HUD, killcam, and achievement notifications give the series a new level of polish and feedback. However, loading old CS games made it apparent just how faulty GO’s netcode is in its current state. Lag wasn’t crippling in the matches I played but it always had a way of rearing its ugly head. GO also makes joining matches and friends a breeze. It’s very much a game of its era, even if its roots are still firmly in the late-’90s.

Like Source before it, Global Offensive is at the mercy of its community. Even with all the work Hidden Path and Valve have put into the game, it remains a hollow shell of what CS: Source has grown into. Though the new modes and features they added are nice, the ones community added to Source that are currently missing here are much nicer — not to mention the things that Hidden Path has oddly removed (free look, sprays).

If you want an excuse to play Counter-Strike again or an approachable entry point into this esoteric series, GO is a faithful reminder of what made this the little mod that could. However, in its current state, I have my doubts that this will be the version installed on fans’ desktops for years to come. As for console players, let’s not kid ourselves — they’ll be gone by the end of the year.

It may lack some of the community niceties, beloved maps (Assault, anyone?), and little features of past games, but Global Offensive delivers on the promise of a faithful, polished, and better looking Counter-Strike for whoever wants it. Even if the community doesn’t meet the golden standard of 1.6 and Source, CS:GO will remain a multiplayer classic for those willing to put in the time to learn the maps and weapons.