This is one of those games that I can promise isn’t what you think it is. Confrontation looks like a Diablo style hack-n-slash title, or maybe it’s a little bit like Dungeon Siege. Nope, get those ideas out of your head. Stop thinking “role-playing game,” and start thinking “strategy game.”

Now, you might be conjuring up images of Warhammer 40,000: Dawn of War II, but it’s not like that. The best way I can describe Confrontation is that it’s like Dragon Age: Origins with most of the RPG taken out. The story is linear and mission based, there are levels and minimal options to customize characters, the combat is in real-time but you can pause it, and there is no loot. It maintains a flavor of an RPG, but at its core it’s a strategy game. 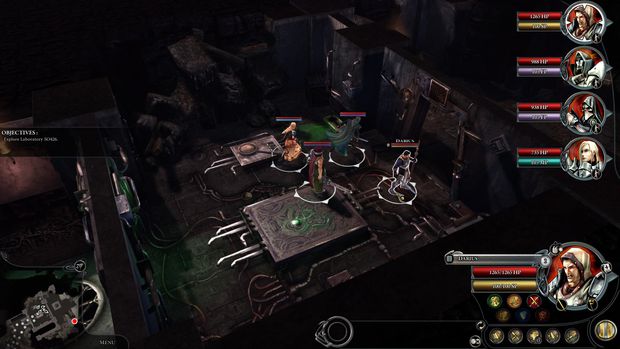 Confrontation is a weird strategy-combat game with RPG elements sprinkled throughout. It’s broken up into missions that usually take an hour or two to finish. The levels are mostly linear with some branching off to find upgrades for your squad, or a boss to kill for some extra experience. Before each mission, a selection screen allows you to pick four characters to bring with you on the next mission. Some levels have spots where you can swap out any member for another character during the mission. These characters range from tanks, healers, rogues, mages, or some type of hybrid.

I pretty much stuck with the same four characters for my entire playtrough; there really wasn’t a reason to ever change. My party had a tank, healer, mage, and damage dealer, and they were able to handle everything OK. I tried mixing it up, but when I would get creative everyone would die. It might help to swap out some characters if you know what types of enemies there will be, though. Some levels have more mages, so it would help out to bring someone who can drain mana and silence them. There really isn’t a way to tell what type of enemies there will be in a mission in advance, but it is possible to switch characters in the middle of some levels. On normal or easy difficulty, it wasn’t necessary to have this much planning.

Combat is played out in real time, but it can be paused at any time to issue orders to your squad. On the easiest difficulty setting it’s almost possible to play without pausing, but normal and higher settings will require you to pause frequently to move units around and cast spells. Orders can be cued and characters will try to complete them in order unless they get stuck on something or they can’t get to their target. This happens a lot and it makes issuing multiple orders almost pointless. 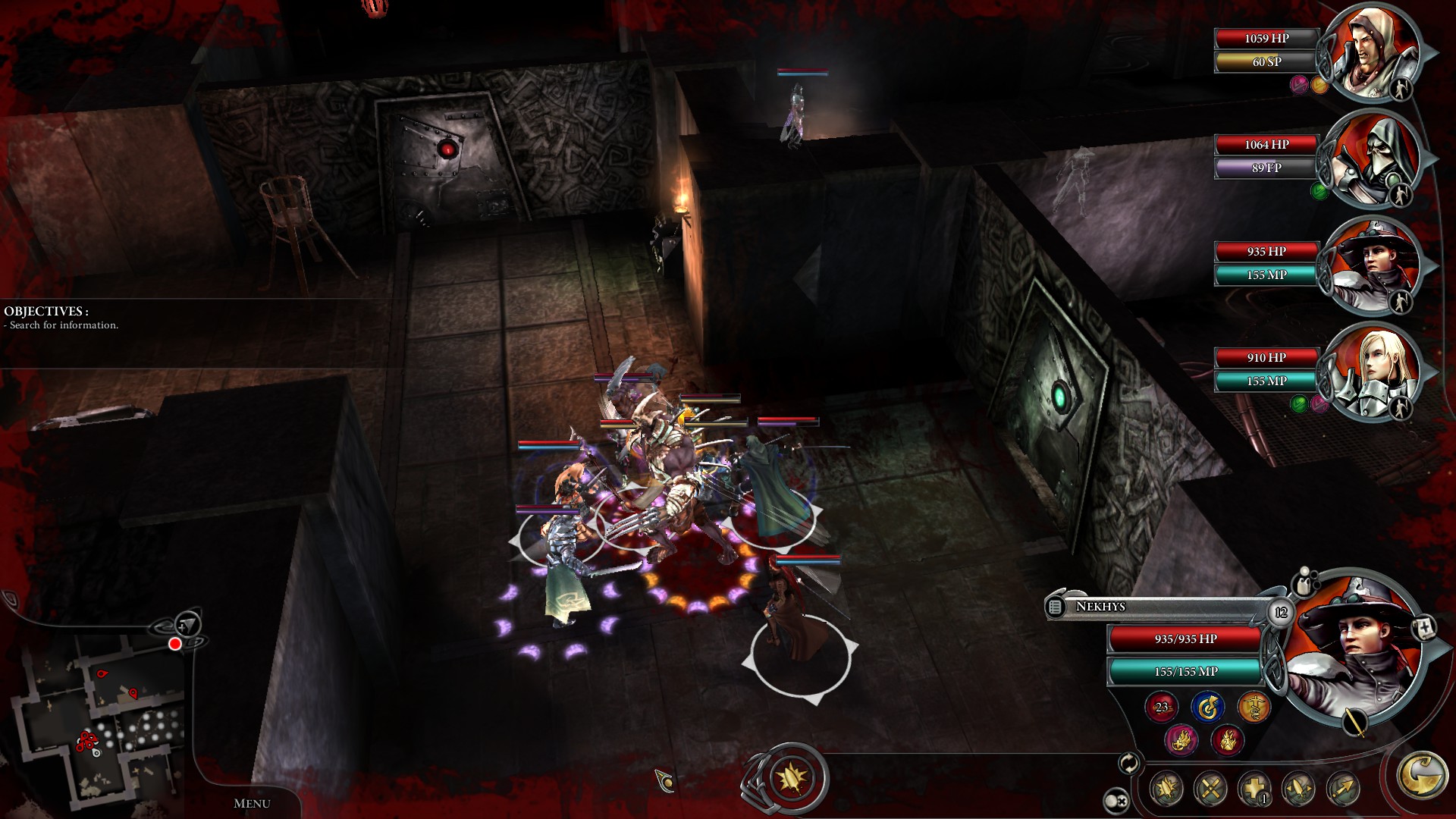 Characters stand crowded too close together and often block each other from the player’s view. A giant cluster of heroes and monsters fills up the center of the screen and it’s difficult to tell what is going on. Spells don’t have distinct visual differences, meaning it’s hard to know who’s casting what. Staring at the characters health bars was the only way to really know who was winning. Characters have yellow circles around their base if they have a buff on them, and a purple aura on them if they have a debuff. This can be helpful for certain spells that remove buffs and debuffs, but it’s hard to tell what the actual spell is. Colored circles appear near character’s portraits showing active effects on that character. Yellow means good and black means bad. This is great if you don’t care what is actually going on at first glance. By hovering over these little circles, a tooltip shows up giving a description of what the effect is, but this is cumbersome and it slows down the flow of combat. A little bit more of a visual clue would have been incredibly helpful.

Another annoying thing is the names of spells. It’s not always apparent what casting a spell will do since there isn’t anything so obviously named as “fireball” or “heal”. Without reading the tool tip it’s hard to know what “Avenging Arm” or “Source of Fire” might actually do. Even after reading the tool-tips, it can still be hard to understand some spells since the tips read like dry factual stat sheets. A lot of spells have secondary effects and can chain with other spells, but it took me awhile to grasp how everything worked together.

After combat is finished, all of the cooldowns are still active on your spells. Health and mana go up fast, but time will be wasted waiting on your abilities to be ready to use again. It’s impossible to know if there will be minutes or just seconds before the next time you enter combat, so its best to always wait until all of your characters skills are ready before you move too far. This makes for a lot of sitting around, waiting for 10-20 seconds after each encounter, which is very boring. 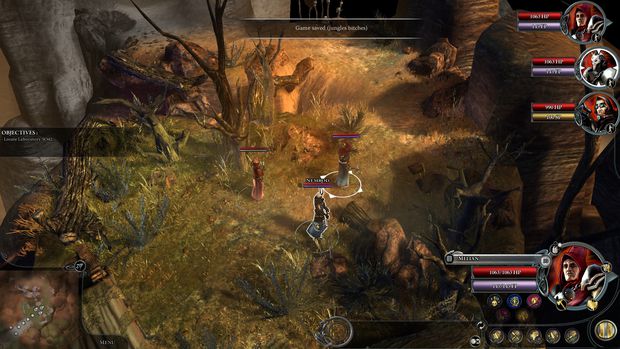 In any game that requires characters to be in the right spot in order to not die a horrible death, it’s very important that the AI runs away from danger, or at least is able to follow your command to not burn to death. That’s how it should work anyway. My units in Confrontation had some type of mental barrier preventing them from grasping the concept of walking around someone. If you tell the entire group to move forward to attack an enemy, there is a really good chance the one of them is going to get stuck on someone else.

The worst part of this is that instead of trying to complete the order, they simply give up and stand there. This usually results in everyone dying because the tank didn’t pull anything, or your healer stood in the corner and wasted the healing spell on himself. I ran into a few instances where my squad couldn’t figure out how to walk from one point to another, and this would happen on simple roads. If any type of obstacle is involved, you’ll have to manually plot out a course for your party.

Rather then collecting loot in the traditional RPG way, there are simply “armor” and “weapon” points scattered around the world. These points can be used to unlock a new level for a character’s armor or weapon. Each time a point is used, there is a choice between two different upgrades for each level. It’s usually choosing between a defensive or an offensive bonus. There isn’t any visual change to a character after upgrading, which is disappointing — it’s dull to see a character look the same way for 40 hours. 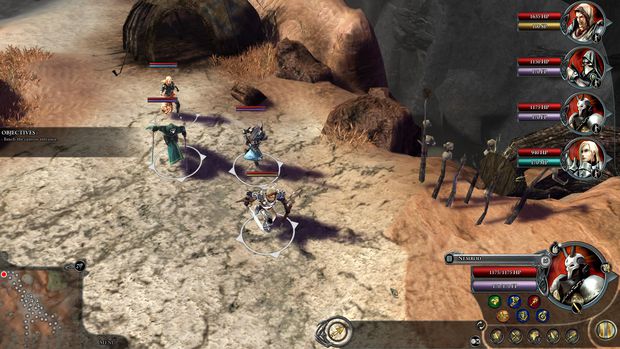 The story is detailed, and you can tell that Cyanide is drawing from the lore of the board game that Confrontation is based on. Sadly, just because it’s detailed it doesn’t mean that it’s interesting. If I spent three hours talking about minor conflicts in the Spanish-American War, I could probably cover a lot of detail while you fell asleep. The one saving grace for the game’s story is the way that it’s told. Before each mission, and at key points while you are playing, a narrator tells the player what is going on. I love this style of storytelling and more games need to use it — the guy’s voice sounds awesome too. It sounds like narrator from Trine, but it’s not the same actor. The fantasy setting and plot have a thick coating of steampunk, which reminds me a little bit of Planescape Torment.

There are bonus missions which you can unlock while you play the campaign. These are just accessed from the main menu, and they play out just like the rest of the campaign. There is also a multiplayer mode, but in the almost three weeks that I have had the game I have never been able to find anyone else to play with, so I can’t really say much about it. I had hoped to be able to play it and cover it here in this review, but if I can’t find a match to play, then you probably won’t have any luck either. If you are interested in multiplayer, then you’ll probably want to skip over Confrontation. Just think of it as a bonus if you get lucky and find a game online.

I had a lot of mixed feeling about this game. I can’t say don’t play it, and I can’t tell you that it’s worth $40. I hate to say “if you like this genre, you’ll like Confrontation” mostly because I’m not really sure what genre this is. I love RPGs and strategy games, and I really didn’t enjoy it. On the other hand, it’s decent enough that I can see some people enjoying it. If you like the idea of fine-tuning tactics with a small squad during repetitive combat for 40 hours, then you might find something here. If that’s not your thing, you should probably just replay Dragon Age: Origins or Dawn of War II.