And hear the lamentations of their servers

Despite not having much affinity for survival games, I did find Funcom’s Conan Exiles rather promising upon its full release earlier this month. In my Review In Progress, I noted that I was having fun in its wide, very pretty, Exiled Lands, largely freed from the confines of a scripted narrative and encouraged to chart my own path to glory and/or death.

I resolved to keep at it for a while longer, at least until I got a taste of the game’s more advanced systems, and had seen for myself some of the new content Funcom added for the full launch, namely the new volcanic and swampy territories, as well as taking a crack at larger-scale base-building and the multiplayer scene.

Unfortunately, for all my ambition to drink deeper of the game’s offering, a life in the Exiled Lands can be a savage, unforgiving one. 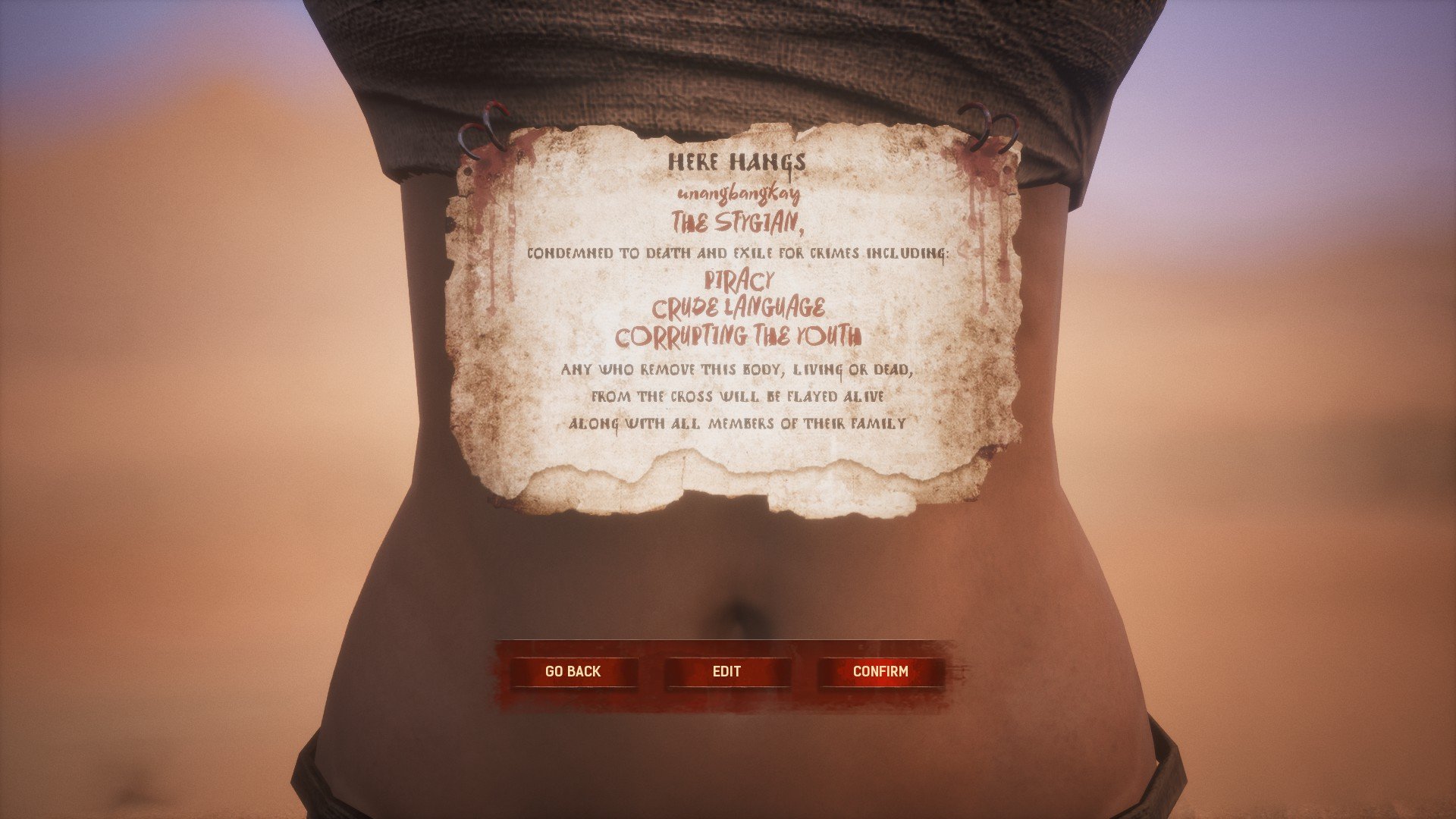 Indeed, my greatest enemies in Conan Exiles were not the fierce creatures or hostile NPCs, but the game’s comparatively tiny server capacity. Despite the game being on a bit of a post-release high in terms of overall population, every server is limited to a mere 40 players, and several times I would make significant progress on one server, only to have it fully occupied the next time I tried to play, forcing me to start anew. Players who have limited time to play Conan Exiles and don’t care much for interacting with others can opt for an offline solo session. But seeing as playing with a group is the fastest way to explore the game’s top-level unlocks and multiplayer content, that wasn’t an option for me.

Eventually though, I did have my own set of encounters with other players on a newly-booted Asia-region server. They went as well as could be expected of what happens to random bystanders watching two groups go at it. While at its core, Conan Exiles’ player-on-player action is similar to what can be found in the likes of Rust or Ark: Survival Evolved, the game distinguishes itself through its integration of Conan the Barbarian lore. Players who worship one of the Hyborian Age’s gods can, with an appropriate amount of effort and some key structures, even summon and briefly control avatars of those gods, and luckily, I watched one group of players summon a floating tentacled horror to demolish their opponents’ base. I was quickly killed trying to get a good look at the thing, but the thought of being able to do that for myself poses a tantalizing prospect.

Even more mundane base sieges are made more exciting thanks to the inclusion of the “climb anything” traversal style. Simply holding a button allows players to cling to almost any surface for as long as their stamina holds out. The feature seems explicitly inspired by the climbing in The Legend of Zelda: Breath of the Wild, and it’s put to good use here as Conan Exiles players can scale sheer walls and cliffs in search of plunder, loot, or even just a good view. The construction system is also fairly generous. Players can build into cliff faces and other odd locations, allowing one to claim a spot with some genuinely creative wizard’s tower of a structure.

Getting to the more advanced unlocks is hard to do all alone, but Conan Exiles‘ solution to the problem of labor shortages is an age-old one: Slavery. Indeed, the “Thrall” system fits into the savage world of Hyboria, and allows players to knock out NPCs with a special weapon, then tie them up and drag them back to base to be broken on the iconic “Wheel of Pain” structure. Moral concerns aside, the actual act of capturing NPCs is rather mundane. After being broken on the Wheel, Thralls appear as, effectively, a placeable piece of NPC furniture. Once placed, Thralls will act based on their archetype. Guard Thralls attack hostile wildlife and players when they approach, while Entertainer Thralls will dance endlessly, and lower “corruption”, a negative stat that rises when players venture into areas contaminated by fell sorcery. Specialist Thralls like blacksmiths can also be found and put to work on an appropriate structure, and will automatically craft advanced materials, allowing access to new recipes. 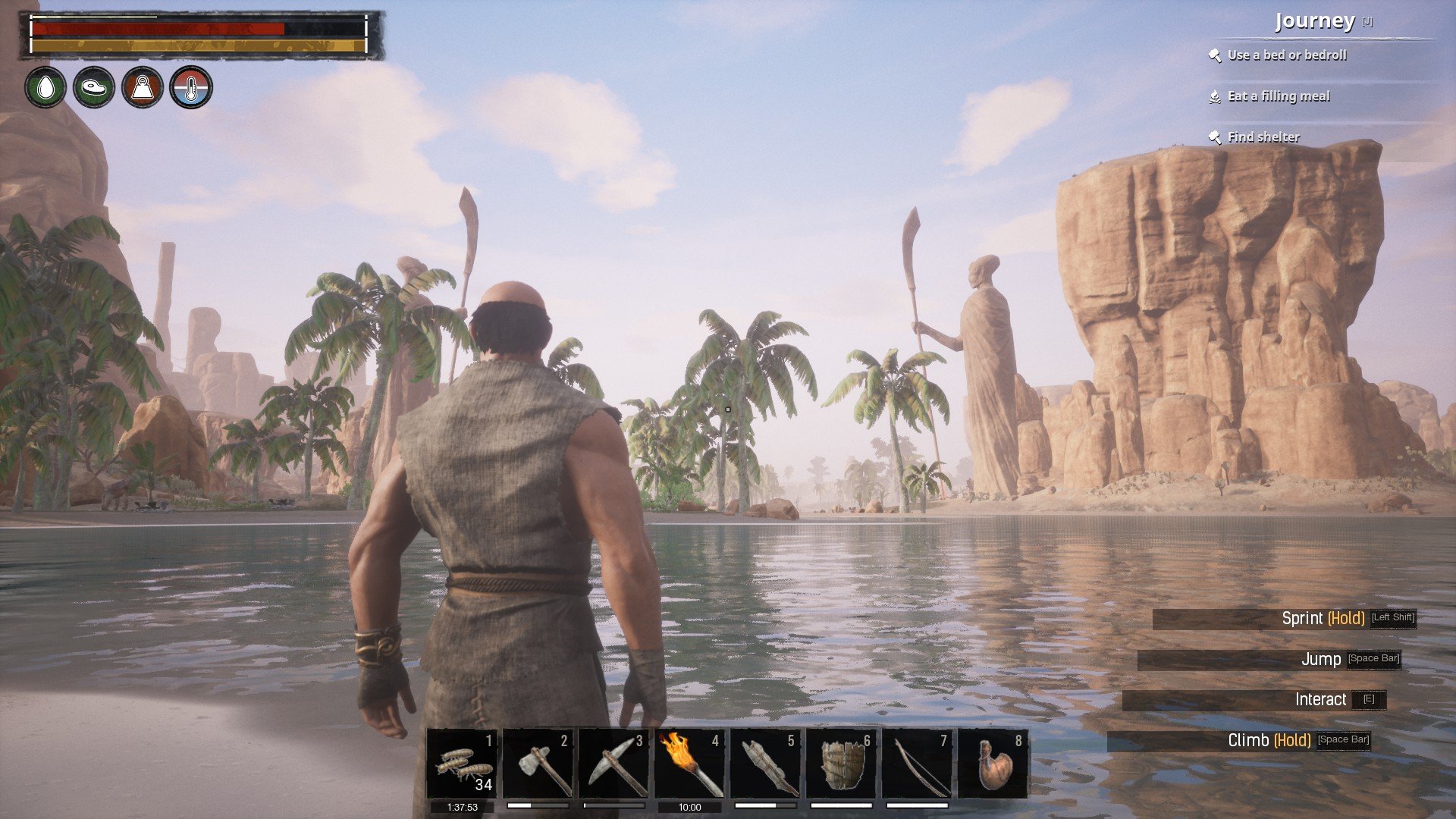 When played solo, Conan Exiles feels like a fleshed-out, fantasy iteration of Fallout 4‘s settlement building system, though in this case even further stripped of narrative ties. Whereas Fallout 4 tended to make settlement-building oddly inconsequential for its depth, Conan Exiles puts it front and center as the key to advancement. A building-hating player could theoretically survive in the Exiled Lands, but wouldn’t get very far for lack of the advanced items and unlocks.

Similarly, sufficiently advanced players can even tempt fate itself, thanks to the “purges”. Building up advanced bases past a certain point can attract attention from the locals, who, after a threshold is reached, will attack the base in a purge. Ideally, purge targets will have a line of defense, with thralls ready to repel the assault, but the larger and more powerful a player group or construction is, the stronger a purge it will invite. This semi-regular horde-mode gameplay is a fun way to keep groups of players on their toes, even in otherwise safe PvE environments.

Unfortunately, getting to that advanced point can be a real drag. At the time of this writing, all harvesting in the game must be done manually. Given how quickly resource costs can ramp up, that can mean hours of hacking away at trees, bushes, and rocks to hoover up raw materials. Funcom is at work on a patch to allow more of that tedium to be automated (either through Thralls or special structures), but at the moment it’s a weird feeling to be the master of the castle full of thralls, yet still be the only one capable of hauling up the rocks and twigs needed to further exapnd your fortress.

While some of Conan Exiles has rubbed off a bit for me thanks to friction with its more cumbersome aspects, it remains a genuinely engrossing experience to play… if you can find a spot in the queue.

[This review is based on a copy of the game provided by the publisher.]