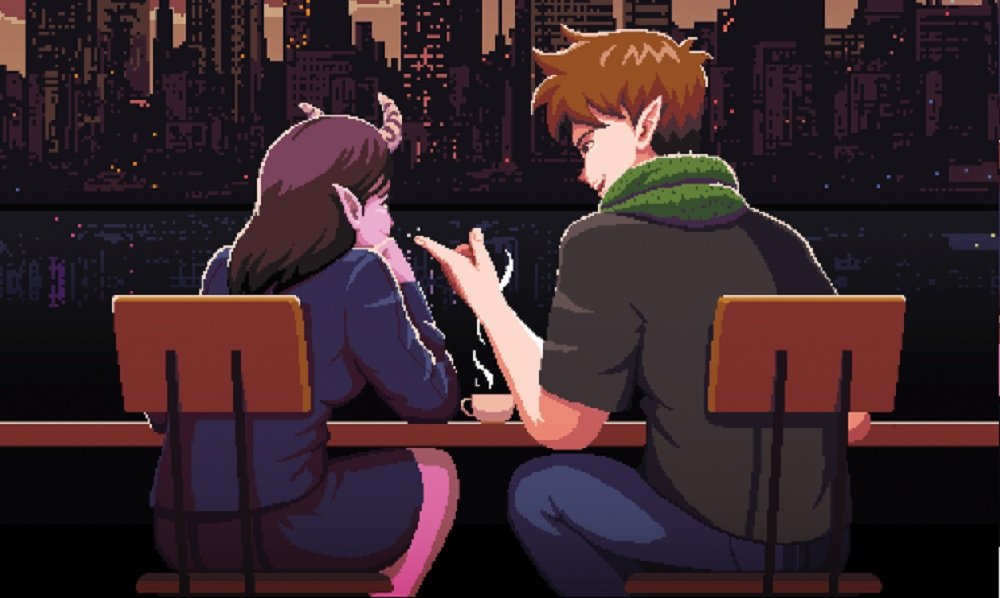 Coffee is my blood. Not literally – that would be hideous – but the caffeine-infused drink has become an unfortunate necessity, something required to start my day, keep me moving once we hit lunch and, on occasion, warm up those colder evenings. (Decaf, of course.)

I visit the same coffee house almost daily, to the point where I have become recognisable, both by name and by drink. It’s nice to speak to familiar faces, even if it’s just over a counter of steaming machines and chocolate and date cakes. But I have to admit, I do sometimes wonder if all of this latte love is doing me harm (he says, 72 hours removed from a migraine).

Still, from minutes to hours at a time, a good coffee house can be a welcome escape. That’s what Indonesian studio Toge Productions is hoping to capture with its interactive visual novel Coffee Talk, a title which – unavoidably – bears more than a passing resemblance to beloved bartending game VA-11 HALL-A. But when you replace Jill’s boozy noir cynicism with a warm smile and just a pinch of cinnamon, can you still set your customers’ world to rights? Let me write your name on this cup and we’ll find out.

Coffee Talk takes place in an alternate Seattle in the year 2020. In this intriguing take on Mother Earth, creatures of fantasy and mythology coexist alongside human beings, working, living, and loving as they attempt to make a life for themselves within the community. The player dons the apron of an unseen barista, the owner of the titular late-night cafe in question, and will get to know some of the locals as they pop in and out of the shop, attempting to rest their troubled souls with a warm drink and some pleasant chat.

Led by struggling young writer Freya, who can always be found propping up the counter, the Barista will meet loved-up couple Baileys (an elf) and Lua (a succubus), supermodel vampire Hyde, pop star Rachel, night-time beat cop Jorji, and several other interesting and unique customers, each of whom is trying to find their way through a weary world.

Coffee Talk is a visual novel, first and foremost. The player’s role is simply to watch the story of this group of individuals play out before them, with interactions limited to accurately making various orders from a selection of stock ingredients. Despite the fact the player is encouraged to name the protagonist after themselves, there is no agency or choice over in-game dialogue. As the story progresses, players will fill out their menu with new drinks, and can opt to serve alternate orders which, surprisingly enough, can tip the scales of fate and lead to several endings for each of the caffeine-addled regulars. Amazing what good coffee can do for a broken heart.

As a visual novel, the characters and story are the very spine of Coffee Talk. While the universe is cool conceptually, and the cast filled out with likable patrons (game dev orc Myrtle is my fave), Coffee Talk is driven to broach almost every subject of real-world injustice that it can grasp. Though noble in intent, this results in a weak, scattershot approach to some really important issues.

Coffee Talk, over the course of a mere three-hour story, references racism, sexism, glass ceilings, over-protective parents, climate change, predators in the showbiz industry, plastic waste, interracial relationships, social anxiety, depression, workaholism, illegal immigration, the struggle for independent artists, the cost of privatised healthcare, crunch in the AAA game industry, and the lack of opportunities for post-war veterans. As an aside, daily newspaper headlines also touch upon elements such as gun control and police brutality.

All of the above issues are exceptionally important, every one an upsetting black mark against modern society. Video games can – and have been proven able to – confront serious issues such as these. But it’s vital that such topics are handled with taut focus. Papers, Please; The Missing; To The Moon; That Dragon, Cancer – these are all titles that also took controversial, life-affecting problems and developed experiences focused on giving them thoughtful reflection. Titles that highlighted each respective issue using meticulous – often distressing – imagery, complex narratives, and abstract metaphor, but most of all, focusing on the specific issue at hand.

Coffee Talk does not have this focus, nor does it have the length or depth needed to address its “catch-all” list of social injustices. As such, the story flits over many of these highlighted issues – content to reference, but not tackle. While the narrative does follow through on occasion (interracial relationships, for example), often these topics are presented in throwaway sentences or single-screen headlines. If an author chooses to write a story, a movie, or any piece of fiction on such affecting and important issues – if that’s the key intent of your dialogue – then it’s not enough to just reel them off like a shopping list and move on, especially in a story short enough to be experienced in a single sitting.

Don’t get me wrong, Coffee Talk does deserve plaudits for having the spirit to bring these subjects to bear – the world should always be reminded that we all need to Do Better. But the slight tale presented herein doesn’t have the length of narrative or strength in writing to carry the weight of this huge catalogue of issues – every one of them an entire conversation in and of themselves – and toss them into the script one after another, before waving them away to make room for the next hot-button topic.

While the preceding negative is unfortunate, I’m pleased to note that Coffee Talk has its fair share of positives. The cast of fantasy characters is charmingly-designed, with the whole HUD rendered in gorgeous, classic-adventure-game pixel art. Despite having few frames of animation, the clientele’s personalities shine through with simple-but-expressive facial animation.

Outside in the near-constant rain, silhouettes of the city-folk rush by, creating the cozy and immersive atmosphere that Toge Productions is clearly aiming for. A background jukebox rolls out warming jazz numbers, which offset the hustle and bustle of the busy streets. If Coffee Talk (the cafe) existed in reality, I’d honestly visit every night. And I don’t think I can pay the atmosphere a higher compliment than that.

Once story mode is completed, some new side-modes are unlocked. These include a “Free Brew” mode, which allows the player to experiment with all of the game’s ingredients at will, in an effort to unlock the full menu of available drinks. Also available is a “Challenge Mode,” a time-based endeavour where the player must make an endless string of drinks against the clock – with bonus time allotted for each correct order. This frantic sub-game tests the player’s memory for ingredients and is quite addictive. Besides these modes, there is also an unlockable art gallery, featuring concept images, ending portraits, and more delightful pixel work from artist Dio Mahesa.

While Coffee Talk‘s story mode is short, I think those wanting to see all the endings, unlock the cafe’s entire menu, and have some fun with the extra modes will find the $13 price point agreeable. Visual novel fans (who I’m led to believe eat up these stories with an insatiable appetite) will likely find an afternoon’s enjoyment in Coffee Talk‘s surreal Seattle, while fan-writers/artists everywhere will dig the universe’s characters.

Coffee Talk is very much a mismatched brew. Without strong focus, the surface-level approach to a catalogue of important issues hampers the writing, the principal element of all visual novels. But while its casual philosophies can sometimes be hard to swallow, great visuals, fun side modes, and a budget price point suggests that, for some readers, Coffee Talk will still go down smooth.