Asymmetric multiplayer is not an easy feat to pull off efficiently. Sure, it’s relatively simple to create two gameplay styles within the same game, but to make them blend together to create a unique ebb and flow is something that’s not seen too often.

Clandestine attempts to hit that level of gameplay by utilizing third-person stealth mechanics and a separate “hacker” interface, neither of which can exist without the other. The idea isn’t flawless, but dang can it create a good time. 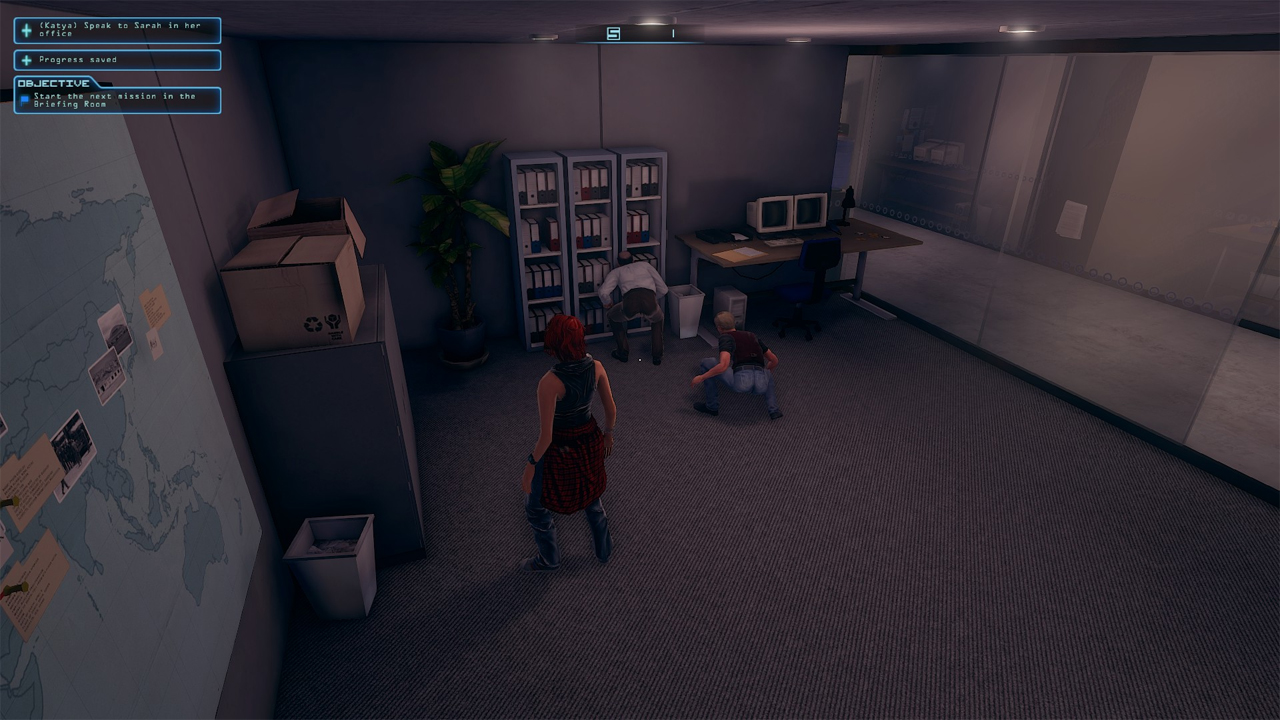 Clandestine takes place in 1996, with the Soviet Union still fresh on everyone’s mind. Players play as either Katya or Martin, field operatives who investigate bad guys who have done bad stuff. Honestly, a lot of the plot went over my head, generally because my friend and I were laughing so hard over voice chat that we missed just about everything.

Clandestine falls perfectly into the “so bad, it’s great” category with its cutscenes. Movements are rigid and imprecise, voice acting is god awful, and things clip through each other. In fact, the characters’ boss has a goatee that clips through his face when he talks. Sure, this could be seen as a terrible oversight from the developers, but it’s so in-line with the quality of the rest of the aesthetic that somehow it works.

The game’s structure has players walking around a headquarters between missions in order to get new information on what just happened, as well as what is coming next. It’s nice to have legitimate downtime before each mission, and roaming around the building with a friend can yield wonderful things. HQ is essentially a playground that becomes a game of “what goofy position can I get myself into next?” In a way, it reminded me of walking around the base in Perfect Dark.

Mission objectives often have Katya sneaking into specific areas to either interrogate someone for information, or set up a rootkit on a computer for Martin to hack into and download specific data. While boiling the objectives down to their core makes Clandestine
sound same-y, the variation of maps and context keep things fresh from mission to mission. There are even some choices the players can make that affect specific plot elements and mission objectives.

Gameplay entirely depends on which character players control. Katya’s gameplay is third-person stealth, while Martin’s is computer-terminal hacking. Katya’s controls will be familiar to anyone who has played a third-person game before. She can stick to walls, which is a bit janky at times (but never janky enough to ruin a mission). Her job is to avoid detection from guards and cameras by not being seen or making too much noise.

Katya players can approach a mission as they please; it’s possible to go in and out without trying to make a peep, or bring a slew of firepower and kill anyone they deem necessary. The game rewards players for a variety of playstyles, and doesn’t really encourage one over another. 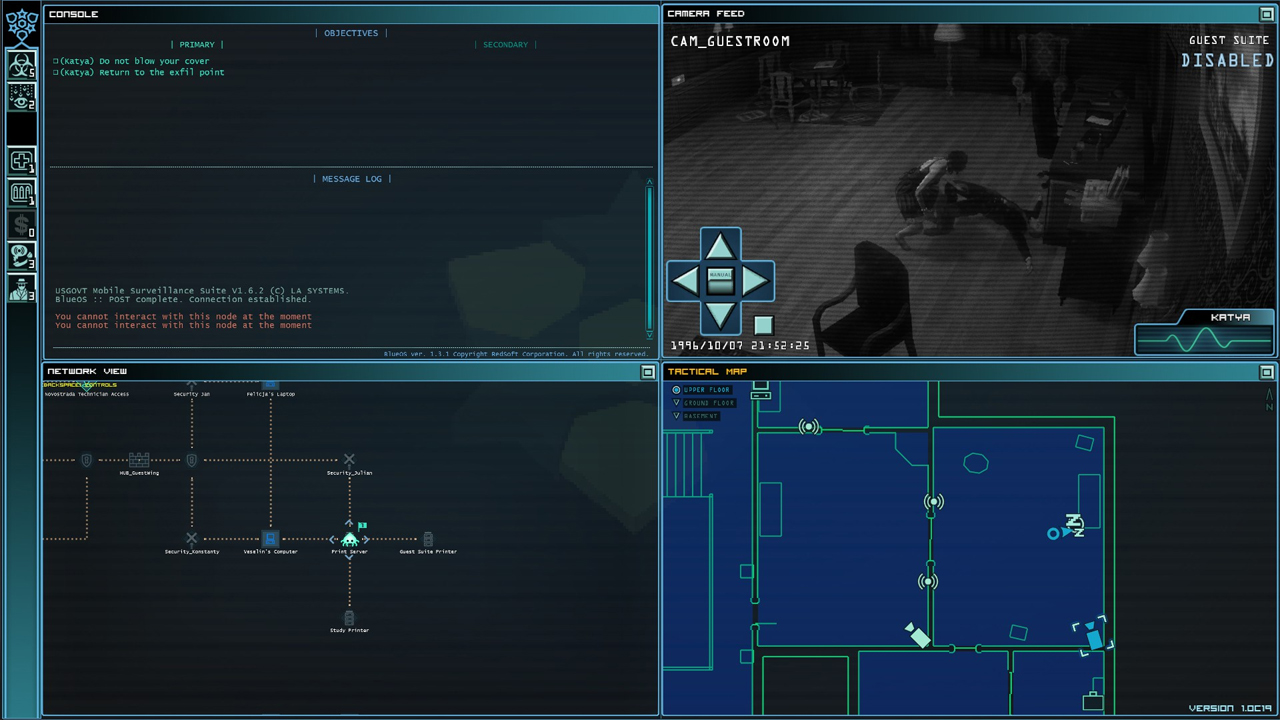 Players controlling Martin have a completely different game in front of them. Martin’s screen is split into four sections: hacking network, camera feed, tactical map, and console. The console is there simply to display mission objectives. The hacking network is a grid of terminals that Martin can hack into. Some are PCs in the map, others are locked doors, and some are miscellaneous objects around the level. Martin controls a little avatar in the network and moves along the grid with the WASD movement keys. Hacking a computer will reveal its login credentials, hacking a door will tell Martin the code, etc. The network admin also has an avatar that chases the player down, disabling them for about five seconds if caught.

The tactical map is a blueprint of the level that Katya is currently in. If Katya comes up to a locked door, she can ask Martin to get the code. Martin can click on the door on the tactical map, it will highlight its node in the network, then Martin can make his way over to it and get the code, tell it to Katya, and Katya inputs it on her end. This is a simple, yet elegant asymmetric design that truly requires teamwork to pull off.

Katya has a camera on her at all times, which Martin can use to see what she sees. He can also hack into cameras around the map, taking over their vision on his camera feed. If Martin controls a camera, it will not “spot” Katya, so she’s safe to roam the area. This also allows Martin to scan a room before Katya enters, which is incredibly useful given the fact that Martin can also tag guards on the map, making them visible to Katya through walls.

Players flying solo as Katya can switch between characters at will. While it works, it’s missing the best element of Clandestine: working together with a buddy. When alone, the hilariously bad cutscenes are suddenly just…disappointing. The coordinated tactics aren’t there. It feels like a much more shallow game in its single-player mode.

Players can join random games online, but doing so will always make the joining player control Martin. This is especially frustrating if two friends want to switch roles. The best way we could figure was to send each other our save files when we wanted to switch roles, and then change who hosts the game. 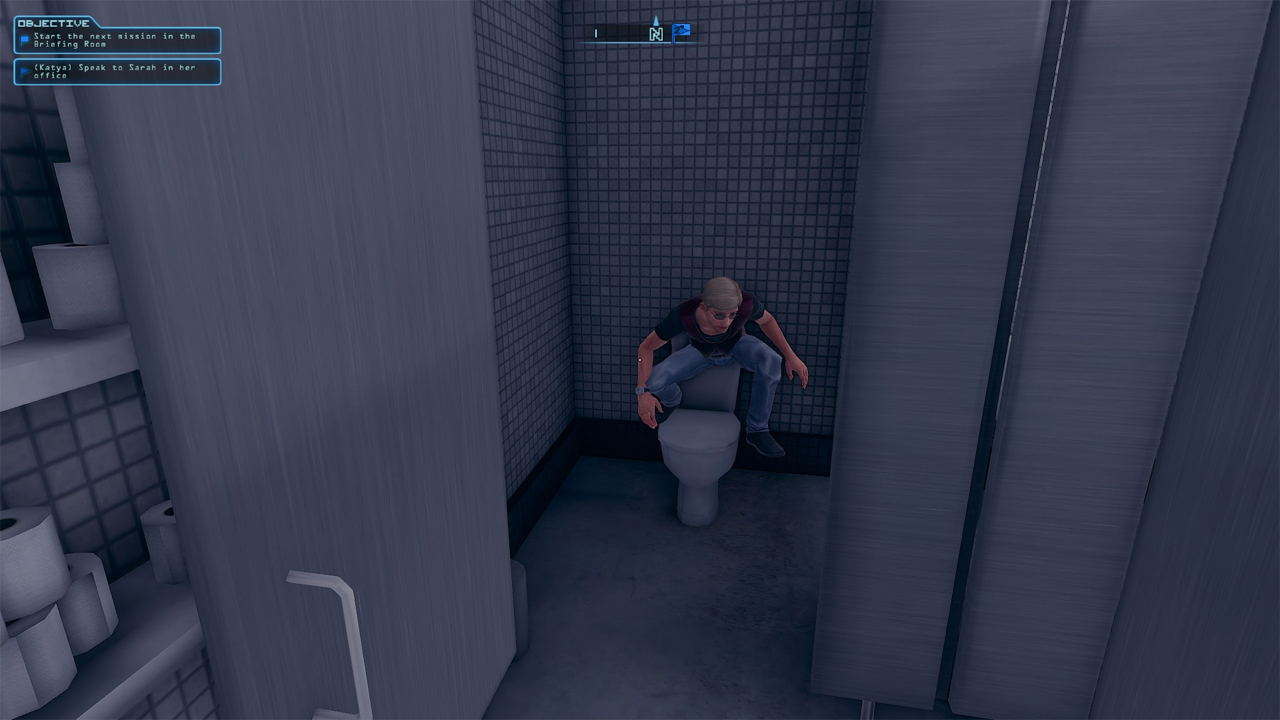 Despite the serious tone set by the plot, it’s best to go into Clandestine with a light-hearted approach. The movement is a bit clunky, the animations and voice acting are stiff as a board, and there’s plenty of visual issues. However, the core gameplay and asymmetric ideas work well together. Grab a friend (this step is very important), jump on to a third-party voice chat program, and go play Clandestine. I have no doubt you’ll come away with a memorable gaming experience.